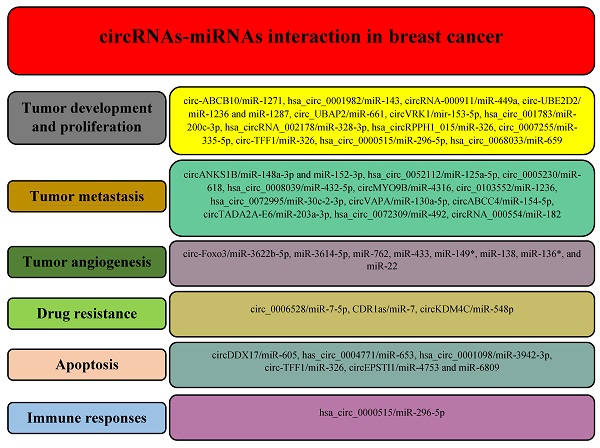 Despite significant advances in cancer therapy strategies, breast cancer is one of the most common and lethal malignancies worldwide. Characterization of a new class of RNAs using next-generation sequencing opened new doors toward uncovering etiopathogenesis mechanisms of breast cancer as well as prognostic and diagnostic biomarkers. Circular RNAs (circRNAs) are a novel class of RNA with covalently closed and highly stable structures generated primarily from the back-splicing of precursor mRNAs. Although circRNAs exert their function through various mechanisms, acting as a sponge for miRNAs is their primary mechanism of function. Furthermore, growing evidence has shown that aberrant expression of circRNAs is involved in the various hallmarks of cancers. This paper reviews the biogenesis, characteristics, and mechanism of functions of circRNAs and their deregulation in various cancers. Finally, we focused on the circRNAs roles as a sponge for miRNAs in the development, metastasis, angiogenesis, drug resistance, apoptosis, and immune responses of breast cancer.