Concentrations of HMGB1 and Hsp70 of healthy subjects in upper and lower airway: Literature Review and Meta-analysis

Although high-mobility group box 1 and heat-shock protein 70 are implicated in airway diseases and suggested as relevant diagnostic biomarkers, their control concentrations in the airways have not yet been determined. This study aimed to evaluate concentration of healthy subjects for both these proteins in the upper and lower airways via meta-analysis.

We searched MEDLINE, EMBASE, and Google Scholar for articles describing concentration of healthy subjects for these proteins. Data from healthy populations were combined using a random-effects model, and subgroup and sensitivity analyses were performed to determine between-study heterogeneity. We analyzed 22 studies involving 485 patients.

Our findings support the further evaluation of these proteins as biomarkers for airway-related diseases.

High-mobility group box 1 (HMGB1) is an actively studied DAMP molecule. HMGB1 functions as a cytokine following its extracellular release from injured cells, activated sensory neurons [3], or cells associated with the immune system (macrophages and dendritic cells) [4]. It is a nuclear protein that regulates gene expression by binding to DNA in a non-sequence-specific manner, with its affinity for DNA being regulated by phosphorylation and acetylation [4]. In the extracellular compartment, HMGB1 binds to receptors, including toll-like receptor (TLR) 2, TLR4, and receptor for advanced glycation end products (RAGE) [5,6], which triggers the activation of proinflammatory signaling pathways and exerts pleiotropic effects depending on the cell type [5].

Recently, heat-shock protein (Hsp) 70 was suggested as another DAMP molecule. Unlike HMGB1, Hsp70 is present in the cytoplasm and functions as a highly conserved molecular chaperone by facilitating intracellular protein folding and the degradation of misfolded proteins. Upon its extracellular release during cell stress or injury, Hsp70 activates both TLR2 and TLR4 signaling [2,7].

We developed and prospectively registered the study protocol using PROSPERO (registration number: CRD42018105478; www.crd.york.ac.uk/PROSPERO). This study was performed according to the Meta-analysis of Observational Studies in Epidemiology guidelines [15] and reported according to the Preferred Reporting Items for Systematic reviews and Meta-Analysis guidelines [16].

All randomized controlled studies, cohort studies, case-control studies, including nested case-control studies, and cross-sectional studies reporting normal values of HMGB1 and Hsp70 in the upper and lower airways of healthy populations were included. We included only studies that performed enzyme-linked immunosorbent assay (ELISA) to objectively quantify the HMGB1 and Hsp70 levels in nasal lavage (NAL) or bronchoalveolar (BAL) fluids or induced sputum.

Two authors (HJM and HK) independently performed a database search using OVID-MEDLINE, EMBASE, and Google Scholar in August 2018 and updated the search results in March 2019. Additionally, the reference lists of the identified studies and eligible articles were searched manually. The search strategy, which included a combination of free text, medical subject headings, and EMBASE subject headings, is described in Appendix S1 in the Supplementary Information.

Two authors (HJM and KSK) independently scanned the titles and abstracts of the reports identified via the search strategies and retrieved the full paper upon determining the eligibility of the study. Potentially relevant studies selected by at least one author were retrieved, and the full-text versions were evaluated. Two authors (HJM and KSK) discussed the relevance of each study to arrive at a consensus regarding study inclusion or exclusion. Disagreements were settled via discussion with a third investigator (HK). None of the authors had any objection to the final results.

All interrelated data from the included studies were independently extracted, entered in a standardized form by two authors (HJM and KSK), and crosschecked. When an agreement could not be reached, the dispute was resolved with the aid of a third investigator (HK). The standardized form included the title, name of the first author, name of the journal, year of publication, study design, the country where the study was performed, sex, age, number of patients, history of smoking, the location where the sample was drawn, sampling method, analysis method, normal range of Hsp70, and normal range of HMGB1. The data were initially extracted from the tables or text. In cases of missing or incomplete data, an attempt was made to contact the authors to obtain the relevant information. Whenever the reported data were in the form of a median (P25-P75), median (range), or mean (standard error of the mean), the mean and standard deviation were calculated from these values [17,18]. For data presented as figures rather than numbers [19-23], the open-source software Plot Digitizer (v.2.6.8; http://plotdigitizer.sourceforge.net) was used to extract the numbers.

Flow diagram of the search process and the inclusion and exclusion criteria for the meta-analysis. 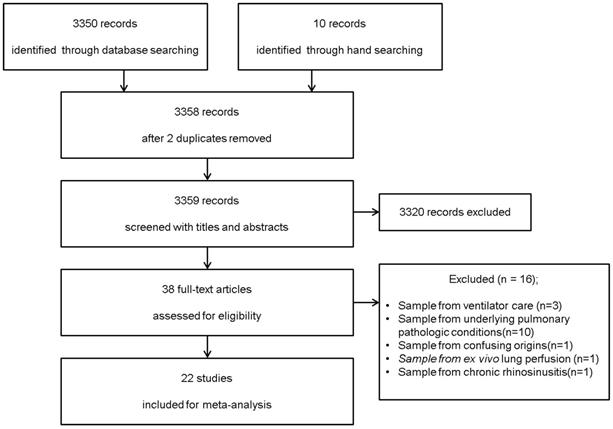 We identified 3,350 potentially relevant studies from the database search (OVID-MEDLINE, EMBASE, and Google Scholar) and 10 studies from a manual search. After excluding 2 duplicates, 3,358 records were screened based on their titles and abstracts. Of these, 3320 studies were excluded because they did not belong in the area of interest. The full texts of the remaining 38 studies were reviewed in detail. Sixteen studies were excluded for the following reasons: 1) control subjects were on ventilator care (n = 3) [24-26]; 2) BAL fluid was obtained from subjects with underlying pulmonary pathologic conditions (n = 10) [27-36]; 3) there was confusion regarding whether the control subjects were healthy or had non-cystic fibrosis with recurrent infections (n = 1); 4) BAL fluid was harvested during ex vivo lung perfusion (n = 1); 5) NAL fluid was obtained from patients with chronic rhinosinusitis (n = 1) [9]. Therefore, 22 studies comprising 485 subjects met the inclusion criteria and were included in this systematic review and meta-analysis (Figure 1). The kappa value for selecting articles between the two reviewers was 0.756.

Description of the Studies

Analysis of HMGB1 concentrations according to location

HMGB1 concentrations in the lower airway

Characteristics of the studies

†Data are presented as the means ± standard deviations or medians (Q1-Q3). 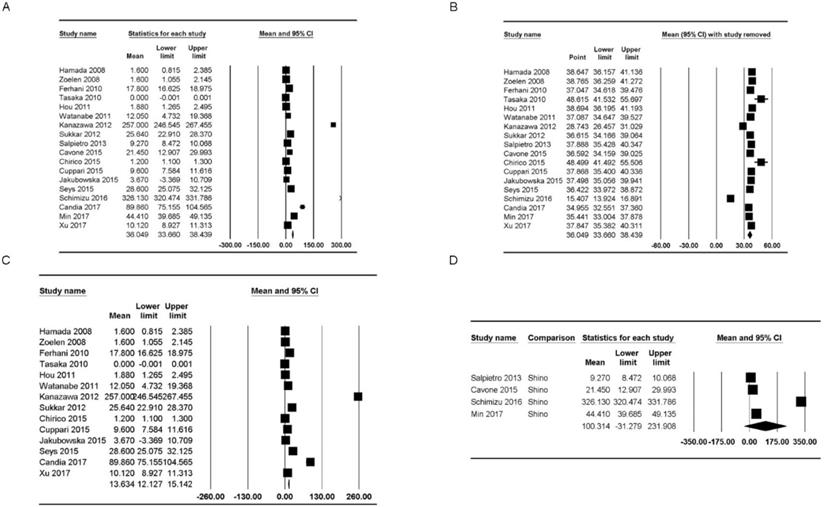 HMGB1 concentrations in the upper airway

Analysis of Hsp70 concentrations according to location

Hsp70 concentrations in the upper and lower airways

DAMPs, such as HMGB1 and Hsp70, are conducive to inflammatory damage associated with inflammatory diseases of the airways [2,49]. Because the concentrations of HMGB1 and Hsp70 can be elevated and have been suggested as potential biomarkers in various diseases, verifying the normal control concentrations of these molecules in the airways is essential to assess their efficacy as biomarkers.

Forest plots of the concentration of healthy subjects of Hsp70 in the upper and lower airways. The figure depicts individual trials as filled squares with sizes relative to the sample size and the 95% confidence interval of the difference as the solid line. The diamond shape indicates the pooled estimate and uncertainty for the combined effect.

This meta-analysis demonstrated different mean concentrations of HMGB1 in induced sputum (17.62 ng/mL) [39,42-44,48] and BAL fluid (6.19 ng/mL) [20,21,23,25,34,38,40,41,45-47]. Sputum analysis represents a non-invasive and cost-effective method potentially useful in clinical practice as a disease-screening procedure [49]. However, because the mean concentration of HMGB1 was higher in sputum than in BAL fluid, a known control level for HMGB1 is necessary before its consideration as a diagnostic biomarker. Additionally, NAL fluid is more safely and easily collected from patients (i.e., via nasal irrigation) relative to procedures involving tissue harvesting or blood sampling. A review described previous studies evaluating the importance of HMGB1 in upper airway inflammatory diseases, such as rhinosinusitis and allergic rhinitis; however, the analyses were performed using nasal tissue [51]. In this analysis, we found only a limited number of studies using NAL fluid [5,8,19,22]. Therefore, clinical studies using NAL fluid and a larger cohort should be performed to analyze the potential significance of HMGB1 and Hsp70 concentrations as non-invasive and efficacious biomarkers for diagnosing upper airway diseases. Furthermore, standardized sampling method for airway fluid collection should be set to get control reference range for these potential biomarkers in regional area.

Additionally, the concentration of healthy subjects of extracellular HMGB1 (ng/mL) were higher than those of Hsp70 (pg/mL) in both airways. Both HMGB1 and Hsp70 are ubiquitous proteins; therefore, the determination of their DAMP-specific functions as inflammatory modulators is potentially important. Interestingly, a study by Tasaka et al. [34] was the only one to report failure to detect HMGB1 in BAL fluid from healthy controls, though they detected HMGB1 in other groups of patients, such as those with autoimmune disease, malignancy, and acquired immunodeficiency syndrome. Moreover, sputum analysis by another study revealed HMGB1 concentrations ranging from 0 ng/mL to 45.2 ng/mL [38]. This large concentration range could be the result of the excessive dilation of target samples or instability of the sampling method; therefore, standardized sampling methods are required.

There are limitations to this meta-analysis. First, compared with studies involving pathological conditions, studies evaluating the control concentration of HMGB1 and Hsp70 in regional airways are very limited, especially, in case of Hsp70 in upper airway. Therefore, the relatively small sample size of the included studies might have influenced the heterogeneity of the results. As interaction between HMGB1 and Hsp70 has been reported in previous study [54], large population study considering HMGB1 and Hsp70 at the same time might reveal true control concentrations. Second, in some studies, the authors did not provide original data regarding the actual concentrations. Although we attempted to contact the authors to obtain this original data, we were unsuccessful in some instances. In those cases, we extracted the data regarding the HMGB1 and Hsp70 concentrations using Plot Digitizer. Thrid, we did not separate Hsp70 into subtypes owing to the small sample size of the enrolled studies [47]; however, we note that Hsp70 is among the most commonly studied members of the Hsp family and can be sub-grouped accordingly [55]. Furthermore, the levels of other Hsps might be worth evaluating in the context of this analysis. Finally, we did not evaluate the effect of smoking history as only a few studies supplied this information [20,30,34,38-40,42,43,48]. Taylor et al. [56] suggested that smoke exposure could influence the concentration of HMGB1. Also, specific information of enrolled population such as racial differences or obesity was not considered in this study. Therefore, the effect of specific characteristics such as smoking history, racial difference, and obesity on healthy subjects' of HMGB1 and/or Hsp70 concentration in regional airways should be evaluated further.

Overall, in this study, although the concentration of healthy subjects of these proteins varied in the upper and lower airways, the levels of both were higher in the upper airway than in lower airway, and the concentration of healthy subjects differed according to the age and sampling procedure. These findings support the further evaluation of these proteins as biomarkers for airway-related diseases.

This research was supported by a National Research Foundation of Korea (NRF) grant funded by the Korean government (MSIP) (NRF- 2017R1A1A1A05000760 to HJM), and the Chung-Ang University Research Grant in 2019 (to HK). The funding organizations had no role in the design and conduct of the study; collection, management, analysis, and interpretation of the data; preparation, review, or approval of the manuscript; and decision to submit the manuscript for publication.