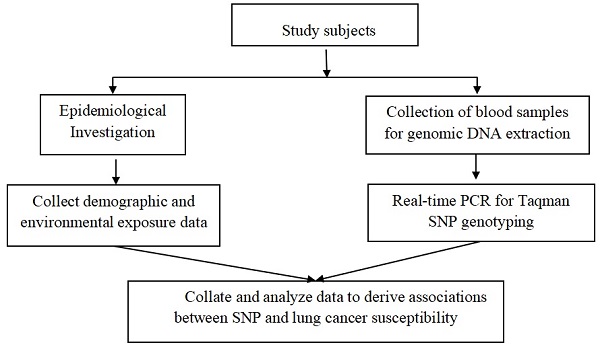 Results: The findings of the study showed that rs3200401 was significantly associated with the risk of non-small cell lung cancer (NSCLC) and lung squamous cell carcinoma (LUSC). Compared with homozygous CC genotype, CT heterozygous genotype decreased risk of NSCLC (Pa = 0.034) and LUSC (Pa = 0.025). In addition, no statistical association was detected between rs619586 and lung cancer susceptibility. The interactions between genes and cigarette smoking were discovered via crossover analysis. However, there were no remarkable gene-environment interactions in additive and multiplicative model.

Conclusion: Rs3200401 in lncRNA MALAT1 was associated with the susceptibility of non-small-cell lung cancer and lung squamous cell carcinoma. The gene-environmental (cigarette smoking) interactions were not notable.

In recent years, a very important factor causing human death was malignant tumors. In particular, the incidence and mortality of lung cancer are always at the forefront [1-3]. The global data (GLOBOCAN 2018) predicted that the number of cases in Asia accounted for nearly half of all new malignancies (18.1 million) worldwide, and nearly 70% of cancer deaths are Asian [4]. Cigarette smoking is one of the environmental risk factors leading to lung cancer. But it is estimated that half of all new cases were non-smokers or smokers who quit many years ago [5]. Therefore, smoking cannot fully explain the cause of the disease. Other studies had shown that genetic factors also play a crucial role in the process of lung cancer [6-13].

LncRNA MALAT1 located at 11q13, which is also known as NEAT2 (nuclear-enriched abundant transcript 2). MALAT-1 was first discovered in a study of non-small cell lung cancer [23]. Since the discovery of MALAT1, it had played an important role in the occurrence, development, metastasis, drug resistance and clinical treatment of the disease [16, 24-30], especially in lung cancer. Moreover, many papers had reported the risk of MALAT1 polymorphisms and diseases susceptibility [31-44]. However, few studies have investigated about MALAT1 polymorphisms and the risk of lung cancer. Therefore, the study recruited Chinese Northeast Han Population as the research objects and performed a case-control study to explore the association between MALAT1 polymorphisms and susceptibility of lung cancer.

The Institutional Review Board of the China Medical University approved the case-control study which was carrying out in Shenyang, Liaoning Province. All the subjects were from the Chinese Northeast Han Population. Cases were from several hospitals in Shenyang. Inclusion and exclusion criteria of the cases were mentioned in our previous studies [39, 45-47]. And the healthy controls were from medical examination centers of hospital. Both cases and controls who smoke more than 100 cigarettes a lifetime were defined as smokers. After signing the informed consent form and filling out the personal information questionnaire, all participants were collected 5mL of venous blood and stored in the -20 ℃ environment for the next step of DNA extraction.

The method of screening two SNPs was the same as the previous research [48]. The minimum allele frequencies (MAF) of the two SNPs (rs619586, rs3200401) were more than 0.05 in Chinese Han population (CHB). Genotyping were conducted by a Real-Time Polymerase Chain Reaction (PCR) with the TaqMan assay. 10% of the samples were randomly selected for repeated experiments, and the genotyping results were consistent.

The data were performed by SPSS software 20.0 (IBM SPSS, Inc., Chicago, IL, USA). The distributions among differences with cigarette smoking, age and gender were assessed by Chi-square test (χ2) and student t-test. Goodness-of-fit χ2 was used to compute the value of Hardy-Weinberg equilibrium (HWE) in the control group. Logistic regression analysis was performed to analysis the experimental data (Indicators: odds ratios (ORs) and 95% confidence intervals (CIs)). And the two indicators were adjusted by gender, age, and cigarette smoking. The interactions were described by additive and multiplicative models. P-value <0.05 (two-sided) was defined as statistically significant.

Distribution of demographic variables in lung cancer and controls.

Interactions between SNPs and Cigarette Smoking

The association of the two SNPs with lung adenocarcinoma and lung squamous cell carcinoma risk.

Crossover Analysis of Interaction Between the two SNPs and cigarette smoking with lung Cancer and non-small Cell lung cancer risk.

Multiplicative interaction between the two SNPs and cigarette smoking exposure 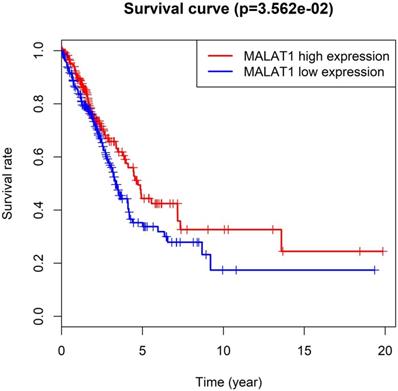 MALAT1, also known as NEAT 2, was competitive endogenous RNA (ceRNA) involved in various molecular processes [49]. Particularly, MALAT1 was a predictive marker for metastasis development in lung cancer [13]. A study discovered lncRNA-MALAT1 participates in NSCLC progression by targeting miR-202 [8]. Furthermore, increased levels of lncRNA MALAT1 could promote brain metastasis of lung cancer by inducing EMT [7]. High expression of MALAT1 promoted the progression of non-small cell lung cancer through the ERK / MAPK signaling pathway [6]. Interestingly, the results of the Cancer Genome Atlas (TCGA) analysis showed that the high expression of MALAT1 in lung adenocarcinoma has a higher survival rate than the low expression in Figure 1 (54 normal / 497 LUAD tissues). These differences required a series of experiments to verify.

To obtain more accurate results, OR and 95% CI were adjusted by age, gender, and cigarette smoking. At the same time, we strictly control the standards of each step. However, this study also had some inadequacies with all similar articles. Factors such as selection bias, sample size, and statistical power may affect the results of our study. Functional mechanism experiments would be needed to verify this result in the future.

The polymorphisms rs3200401 in MALAT1 was associated with the risk of non-small cell lung cancer and lung squamous cell carcinoma in Chinese Northeast Han population. The gene-environmental (cigarette smoking) interactions were not notable.

Thanks for all the participants and funding support agencies.

Ethics Approval and Consent to Participate

The Institutional Review Board of China Medical University approved the study. Subjects in the study signed informed consent forms before participating.