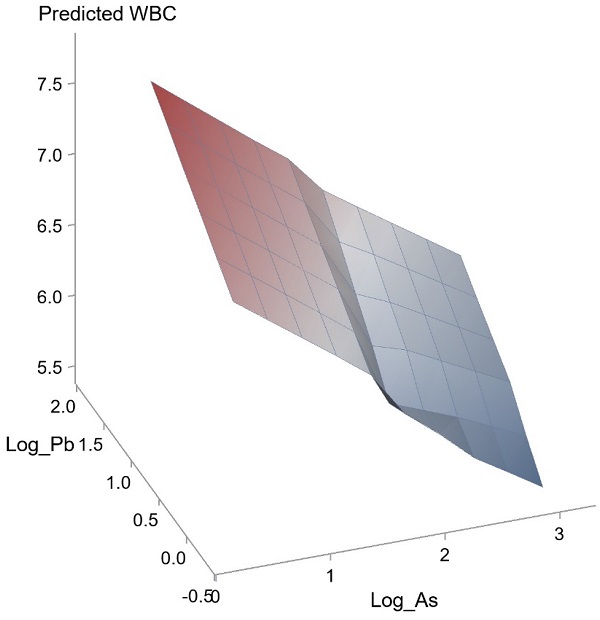 Lead (Pb), manganese (Mn), copper (Cu), arsenic (As), and cadmium (Cd) are among the most common heavy metal pollutants found in industrial countries. For example, the emergence of the endemic “Blackfoot disease” in southwestern Taiwan in the early 20th century which caused peripheral microvascular disease manifesting as progressive gangrene of the feet, was found to be caused by high environmental concentrations of As [2]. In addition, another study found higher levels of mercury and Cd in Taiwanese subjects than in other populations [3], and Cd has been associated with renal damage, cardiovascular disease, impaired neural function, and osteoporosis [4].

Exposure to heavy metals can be through the intake of water, rice and fish [5]. Lifelong exposure to heavy metals can result in multiple organ failure, which is related to dysregulation of immune function and genomic instability. Interestingly, different levels of heavy metals can exert opposite effects on immune function [6]. The immunomodulatory effect of heavy metal poisoning has been explored in animal studies [7-9], however associations between some heavy metals and immune responses in humans are still unclear. Therefore, the aim of this study was to investigate the relationships among heavy metals including blood Pb and urine Cd, Cu, nickel (Ni), As, chromium (Cr) and Mn with white blood cell (WBC) and eosinophil count in the general population in southern Taiwan. The effects of interactions among these heavy metals on WBC and eosinophil count were also explored.

Subjects living in southern Taiwan who participated in a health survey from June 2016 to September 2018 were enrolled in this study. The survey was promoted through advertisements. A total of 2447 participants (977 males and 1470 females) were included in this study, with a mean age of 55.1±13.2 years. All participants signed informed consent forms before being enrolled into this study, which was approved by the Institutional Review Board of Kaohsiung Medical University Hospital (number: KMUHIRB-G(II)-20190011).

Measurements of Heavy Metals in Urine and Blood

The statistical analysis was performed with SPSS version 19.0 for Windows (SPSS Inc. Chicago, USA). Percentages, means±standard deviations, or medians (25th-75th percentiles) were used to describe eosinophil count, triglycerides and the seven heavy metals. The participants were classified into three groups according to the tertile of WBC count as follows: tertile 1, < 5.24*103/μL; tertile 2, 5.24-6.49*103/μL; and tertile 3, ≥ 6.49*103/μL. One-way analysis of variance (ANOVA) followed by Bonferroni-adjusted post hoc test were used for multiple comparisons among groups. Multivariable linear regression analysis was used to identify associations between the heavy metals and WBC and eosinophil count. The natural logarithm was used for all heavy metal measurements. A generalized linear model was used to examine the effects of interactions among the studied heavy metals on WBC and eosinophil count. The LOESS procedure (a nonparametric technique used to estimate regression surfaces) was applied to illustrate the synergistic effects of heavy metals on WBC and eosinophil count using SAS software (version 9.4, SAS Institute, Cary, NC, USA). A p value of less than 0.05 was considered to indicate a statistically significant difference.

Comparison of clinical characteristics among participants according to WBC tertile

Associations among the Heavy Metals and WBC Count

Associations among the Heavy Metals and Eosinophil Count

Values expressed as unstandardized coefficient β and 95% confidence interval (CI). Abbreviations are the same as in Table 1.

Values expressed as unstandardized coefficient β and 95% confidence interval (CI). Abbreviations are the same as in Table 1. 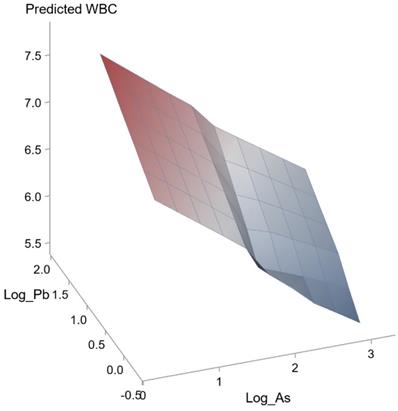 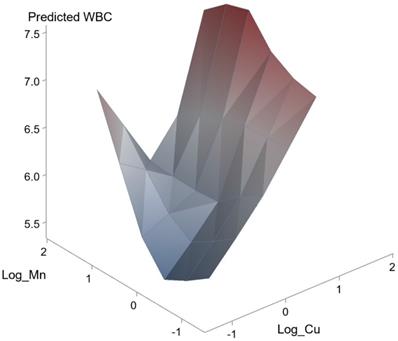 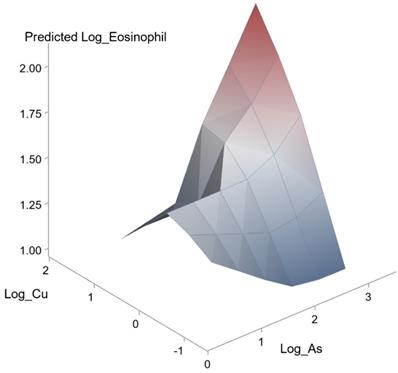 In this study, we investigated associations between immune function and heavy metals among 2,447 Taiwanese participants. Overall, the results showed that high concentrations of Pb and Cu were associated with a high WBC count, and those high concentrations of Pb, As, Cu and Cd were associated with a high eosinophil count. In addition, the results showed positive interaction effects between Pb and As and Mn and Cu on WBC count, and As and Cu on eosinophil count.

There are several important findings in this study. First, a high concentration of blood Pb was correlated with high WBC and eosinophil count. Further, a synergistic effect of Pb and As on WBC count was observed. Pb poisoning is well-known to cause both peripheral and central neurological disorders such as wrist drop, Pb encephalopathy, and impaired coordination [11, 12], which in turn have been associated with immunomodulation [13, 14]. The severity of symptoms has been reported to be dose- and time-dependent, and a level higher than 10 μg/dl in the blood is cause for concern [15]. The role of Pb in immunomodulation has been extensively studied. Struzynska et al. [7] investigated immune responses to Pb poisoning in immature rat brains by continuously injecting 15 mg/kg lead acetate into 15-day-old pups for two weeks. The results showed elevated levels of interleukin (IL)-1β, tumor necrosis factor (TNF)-α, and IL-6 in different areas of the brain, implying increased immunoreactivity under Pb exposure [7]. In another study, Farkhondeh et al. [8] investigated immune reactions to different concentrations of Pb exposure in guinea pigs. In their study, the guinea pigs inhaled 0.1 M, 0.2 M and 0.4 M of aerosol Pb for 1 hour twice a week for two weeks, after which blood samples were collected and analyzed. The results showed elevated levels of total protein, total WBCs, histamine, and eosinophils after Pb exposure, supporting the proinflammatory effect of Pb poisoning [8]. In addition, Hemdan et al. [16] conducted an in vitro study to investigate interactions between Pb exposure and cytokine secretion. The results showed elevated levels of IL-4, IL-6 and IL-10, indicating activation of a T helper 2 cell response and the potential activation of eosinophil production [16]. The results of the present study are consistent with the previous findings that Pb exposure is related to increased WBC and eosinophil count. In addition, our results also suggested that As did not have a significant effect on WBC, but that As and Pb had a significantly positive interaction effect on WBC. This finding suggests that Pb may have a synergistic effect with As on immune activity, which may be caused by the dual effects of Pb and As on increasing eosinophil count.

Another important finding of this study is that a high concentration of Cu was associated with high WBC and eosinophil count. Further, synergistic effects of Cu and Mn on WBC, and Cu and As on eosinophil were observed. Several studies have explored the association between Cu poisoning and immune function [17, 18]. Acute Cu intoxication, defined as oral intake > 10 mg Cu/L, can disrupt the gastrointestinal system [19]. Ude et al. investigated the cytotoxicity of Cu2+ in an in vitro study[20], in which they exposed undifferentiated Caco-2 intestinal cells to Cu(II) oxide (CuO) nanomaterials and Cu(II) sulfate (CuSO4) for 24 hours and then evaluated the effects. The results showed that both CuO nanomaterials and CuSO4 stimulated the secretion of IL-8 and impaired the viability of the undifferentiated Caco-2 cells [20]. Their experiment suggests that Cu intoxication may play a role in immunomodulation. Another study by Ude et al. [21] explored the effects of CuO nanomaterials and CuSO4 on inflammatory mediators in an in vitro intestinal cell model. The results showed stimulation of reactive oxygen species (ROS), IL-8 secretion, and the heme oxygenase-1 gene, further suggesting an interaction between Cu and immune function [21]. Our study is the first to provide clinical evidence showing a significant association between an elevated Cu level with both WBC and eosinophil count. In addition, this is the first clinical study to show significant synergistic effects between Cu and Mn on WBC, and Cu and As on eosinophil count. A possible explanation for these findings is that Cu intoxication leads to an increase in proinflammatory mediators and subsequent activation of immune responses, and that Cu may have synergistic effects with other heavy metals on immune function. Mn has been associated with neuroinflammation. [22], suggesting that it could cause an immune response. This could explain how the synergistic effect between Mn and Cu increased the WBC count. Moreover, since Cu and As had positive interaction effects on eosinophil count, our results show that two metals can have a synergistic effect on eosinophil count.

Another important finding of this study is that a high concentration of As was associated with a high eosinophil count. Exposure to As can lead to dysfunction of multiple organ systems, and even cancer [23]. Blackfoot disease, an endemic vascular disease and a major health concern in southwest Taiwan in the early 20th century, was found to be caused by chronic As exposure through polluted water consumption [24]. In addition, many animal studies have shown that As poisoning can impair the immune system. Nayak et al. [9] conducted a study in which zebrafish embryos were exposed to 2 to 10 ppb of sodium arsenate. After exposure, snakehead rhabdovirus was used to infect the zebrafish, and analysis of their immune reactions showed impaired innate immune function [9]. Other studies have suggested that As poisoning may affect T cell differentiation [25, 26] and cell apoptosis [27, 28]. However, little research has been conducted on the effect of As on eosinophil count. Chatterjee et al. [29] studied 120 children aged five to 15 years, of whom 68 were from As-contaminated areas and 52 were not. Analysis of cytogenic damage showed a significantly higher eosinophil count [29]. Our findings are consistent with previous studies, in that As poisoning in Taiwan was also significantly associated with an elevated eosinophil count.

The final important finding of this study is that a high concentration of Cd was associated with a high eosinophil count. Cd exposure can occur through contaminated water, contaminated food, smoking, and occupational settings [30, 31]. Cd exposure has been associated with bone degeneration [32], renal dysfunction [33, 34], impaired liver function [35, 36], cardiovascular disease [37], and malignancy [38]. Several studies have explored the effects of Cd on cell apoptosis, autophagy, and ROS production [39], however few studies have explored its immunomodulation effects. Hu et al. reported Cd-induced proinflammatory activity in mouse placenta and human trophoblast cells after treatment with CdCl2, including elevated levels of TNF-α, IL-8 and IL-6 messenger RNA [40]. In addition, Paniagua et al. conducted an in vitro study to explore the mechanisms of CdCl2 and the relationship with preeclampsia [41]. In their experiment, JEG cells were treated with CdCl2 under different concentrations for 24 hours, and the results showed a dose-dependent increase in IL-6 through an ROS-associated mechanism. Our study is the first to show clinical evidence of an association between Cd and an elevated eosinophil count, indicating the potential role of Cd in allergic reactions that may be related to increased levels of proinflammatory mediators [41]. Future studies are needed to investigate the association between Cd and immune function.

The main strength of this study is that we enrolled a large number of participants to explore the relationships among heavy metal and immune function. However, there were also several limitations. First, only single measurements of metal concentrations were made. Second, we used total As in urine as a measure of the exposure to the toxic form of inorganic As. Although total urine As can be measured quickly and is thus suitable when processing many samples, it cannot reflect differences in As metabolism and uptake between subjects. Nevertheless, total urine As is still used clinically and considered to be an acceptable biomarker to assess exposure to inorganic As. In addition, the participants were not asked about the environment near their homes, such as the presence of chemical plants, plastic factories, thermal power plants, gas stations, oil refineries and incinerators, which may have affected the heavy metal concentrations. Third, future studies should include data on differentiated WBC count to further investigate impaired innate and acquired immune systems. Finally, as this was a cross-sectional study, causal relationships and long-term clinical outcomes could not be ascertained. Long-term prospective studies with serial heavy metal measurements and immune function assessments are needed to verify our results.

In conclusion, in our analysis of a health survey of subjects residing in southern Taiwan, heavy metals such as Pb, As, Cu, and Cd were significantly associated with increased WBC and elevated eosinophil count. Further, synergistic effects of Pb and As and Mn and Cu on the association with WBC count, and As and Cu on the association with eosinophil count were observed. Our results show that heavy metals can have interaction effects on immune function, and offer clinical evidence of the immunomodulation effect of heavy metal exposure.