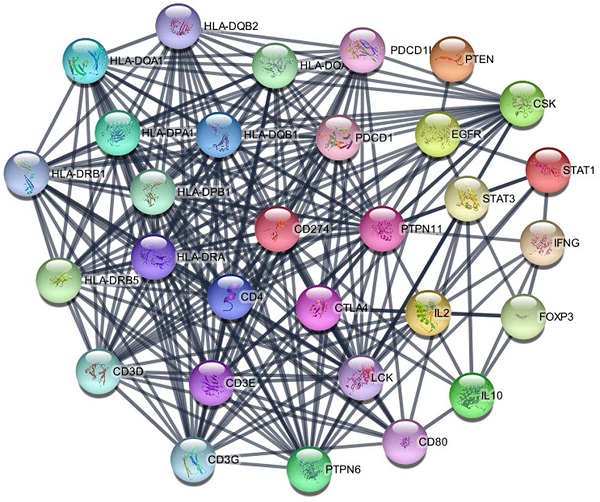 Methods: The pancreatic cancer datasets were downloaded from the Cancer Genome Atlas (TCGA) and the Oncomine to obtain the PD-L1 gene expression profile and clinical information. Bioinformatics methods were used to analyze the correlation between the expression level of PD-L1 gene in pancreatic cancer and clinicopathological indicators, as well as its influence on prognosis. GSEA and WGCNA analysis was performed to predict the possible pathways of PD-L1 gene regulation in pancreatic cancer. TIMER and MCP-counter were used for PD-L1 with immune infiltration. The genes interact with PD-L1 were also investigated by STING and immunoco-precipitation combined with mass spectrometry analysis (IP-MS).

Programmed death ligand 1 (PD-L1) is a 40 kDa transmembrane protein, encoded by CD274 gene. The expression of PD-L1 can be induced in tumor and other tissues by inflammatory factors. When activated, PD-L1 suppresses the immune system in cancer, pregnancy, tissue transplantation, and autoimmune diseases [6].At present, the correlation between PD-L1 gene and pancreatic cancer still needs to be further studied.

This study intends to explore the expression of PD-L1 gene in pancreatic cancer tissue and its clinical significance based on the Cancer Genome Atlas (TCGA) and Oncomine database. In addition, we will also analyze the relationship between PD-L1 and immune cell infiltration. Potential PD-L1 related proteins and pathways were also analyzed in this study.

The RNA-sequencing data and corresponding patient clinical information of 177 pancreatic cancer tissue samples were downloaded from the TCGA database (https://cancergenome.nih.gov/), among which 169 patients had matching mRNA expression profiles and survival data.

Gene Set Enrichment Analysis (GSEA) software was used to study the correlation between PD-L1 gene expression level and gene sets in Kyoto Gene and Genome Encyclopedia pathway[7]. A continuous phenotype was established according to the expression level of PD-L1 genes. The Pearson correlation coefficient between PD-L1 and the reference gene set was calculated by the default weighted enrichment statistic, and gene sequencing was conducted according to the correlation coefficient. The number of random combinations was set to 1000, and the normallized enrichment score (ES) and normallized enrichment score (NES) were calculated, with standardized P < 0.01 and false discovery rates (FDR) < 0. 05 as significant enrichment.

The co-expression gene and enrichment analysis were applied to WGCNA package of R software, which revealed the correlation between genes [8]. Because the genes with little expression variation usually represent noise, we filter the most variable genes (SD > 1.2) and construct a network. The power of β was set to 5 to ensure a scale-free network. The minimum number of module genes was set to 30. The hierarchical cluster tree summarizes the gene modules of different colors. GO analysis was performed using KOBAS [9].

Using STING database to analyze PD-L1 genes and related proteins. The tree diagram of PD-L1 related protein network was constructed with the Cytoscape software. The confidence score cut-off was set to 0.8. The hub scores of the genes in the PPI network were calculated using the cytoHubba app in Cytoscape software. The top nodes were ranked by degrees.

To systematically analyze the infiltration of immune cells in pancreatic cancer, we employed the TIMER as a comprehensive resource (https://cistrome.shinyapps.io/timer/). We conducted a series of analysis on the expression of PD-L1 in pancreatic cancer and its correlation with the abundance of immune infiltrates. These immune infiltrates include B cells, CD4+ T cells, CD8+ T cells, neutrophils, macrophages, and dendritic cells via gene modules.

Differences in PD-1 PD-L1 expression between histologic grades. The datasets were from TCGA (A) and Oncomine (B). 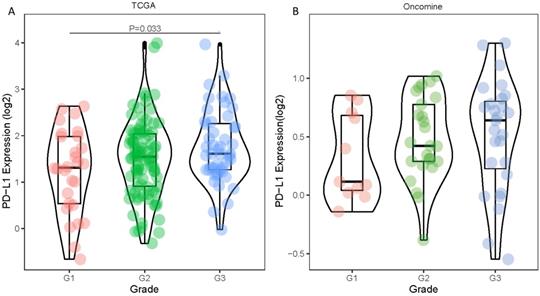 To identify the binding proteins of PD-L1, ASPC1 cells were transfected with pcDNA3-Flag vector, Flag-tagged PD-L1. Lysates were immunoprecipitated with Flag-agarose, and then binding proteins were eluted with 2% SDS. Immunoprecipitates were digested with trypsin at 37 °C overnight. Peptides were extracted with 50% acetonitrile/5% formic acid, followed by 100% acetonitrile. Peptides were dried to completion and resuspended in 2% acetonitrile/0.1% formic acid. The peptides were subjected to NSI source followed by tandem mass spectrometry (MS/MS) in Q ExactiveTM Plus (Thermo) coupled online to the UPLC. GO enrichment analysis was performed using KOBAS.

SPSS 22.0 statistical software and R (https://www.r-project.org/) were used for data analysis. Measurement data were expressed as X ± s, and independent sample t-test and paired t-test were used for comparison between the two groups. Survival analysis was performed by Kaplan-Meier method and log-rank test. Cox proportional hazard regression model was used to analyze the risk factors affecting the prognosis of patients, and the risk ratio (HR) and 95% confidence interval (95%CI) were calculated. P < 0.05 was considered statistically significant. The criteria for GSEA to determine significance enrichment were P < 0.01 and error discovery rate (FDR) < 0.05.

Statistical tabulation analysis of data in TCGA and Oncomine database showed that the expression of PD-L1 was correlated with the pathological grade of tumors. As shown in Figure 1A, by analyzing the TCGA data, we found that the expression of G3 tumors was significantly higher than that of G1 tumors (P=0.033). Similar results were obtained by analyzing the Oncomine datasets. The PD-L1 expression showed an increasing trend with higher pathological grade (Figure 1B). The expression level of PD-L1 gene showed no statistically significant differences between age, gender, pathological stage and TNM stage (all P values were > 0.05) (Table 1).

Correlation between PD-L1 gene and prognosis of pancreatic cancer patients

Relationship between the expression level of PD-L1 gene and the survival time of pancreatic cancer patients. The datasets were from TCGA (A) and Oncomine (B).

The co-expression genes of PD-L1 were analyzed by WGCNA. When the soft threshold β value is set at 5, the connections between genes are distributed in a scale-free network (Figure 4A). A total of 44 modules were obtained by WGCNA analysis (Figure 4B). PD-L1 belongs to Salmon module. We ended up with 226 genes associated with PD-L1. Then, all 226 PD-L1-related genes were selected for enrichment analysis. PD-L1 correlated genes mainly enriched in biological process of inflammatory response, signal transduction, immune response and cell surface receptor signaling pathway (Figure 4C).

Using Microenvironment Cell Populations-counter, we analyzed the relationship between PD-L1 and immune cell population based on transcriptome data. The results showed that PD-L1 was mainly associated with monocytic lineage (r =0.5) (Figure 6A-B).

The PD-L1 associated PPI network was established with 31 nodes and 269 edges (Figure 7). The PPI network showed that some genes had close relationship with PD-L1, for instance, PTPN11, LCK, CD3G, CD3D, CD3E, CD4, PTPN6, PDCD1, HLA-DRA and HLA-DRB1. The top 10 hub genes were screened according to their degree values, as shown in Table 4. 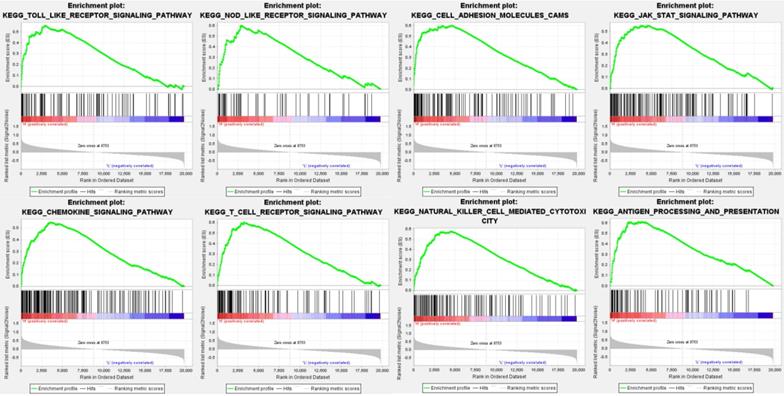 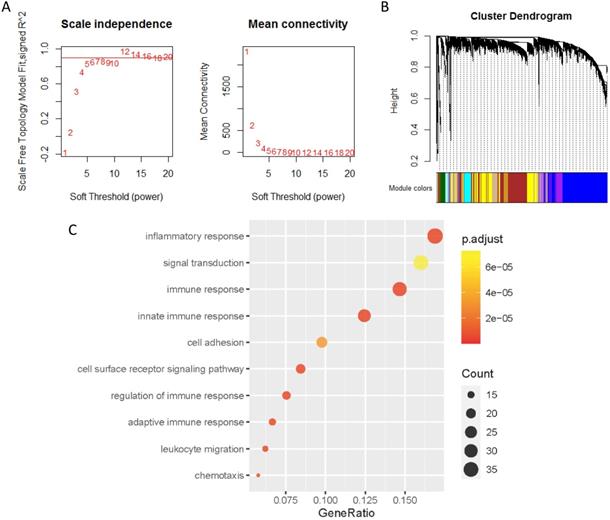 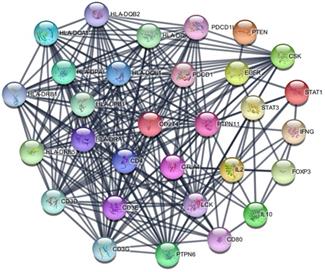 The degree value of the top 10 hub genes

Previous studies have shown that PD-L1 has immune-modulatory function. PD-L1 can inhibit T cell proliferation and cytokine secretion, and negatively regulate lymphocyte activation [12]. PD-L1 can be expressed on the surface of tumor [13]. By binding to PD-1 on the surface of T cells, it induces apoptosis, incapacity and depletion of T cells, and then inhibits the activation, proliferation and anti-tumor function of tumor antigen-specific CD8+T cells to achieve tumor immune escape [14]. According to the correlation analysis of PD-L1 with immune cell populations, we found that PD-L1 were mainly related with monocytic lineage. Data analysis based on TIMER also found a significant correlation between PD-L1 and macrophage infiltration. The interaction of PD-L1 with immune infiltration is a promising research direction in the future. 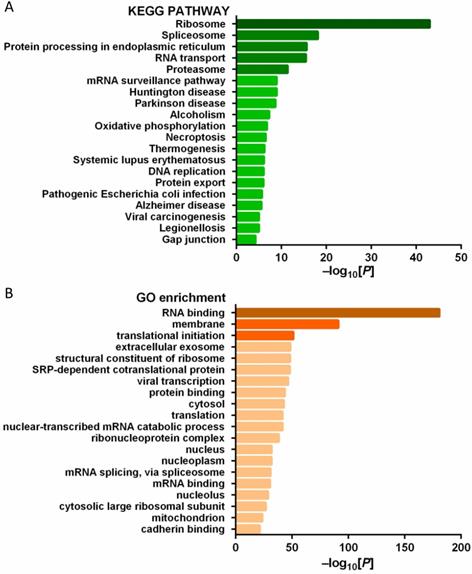 Many clinical studies have attempted to use PD-L1 mAb for the treatment of a variety of tumors, and found that some tumors expressed PD-L1 highly, but the efficacy of mAb was poor. For example, in a phase II clinical study on immunotherapy of pancreatic cancer, although 12% of patients had high PD-L1 expression (more than 25% of tumor cells expressed PD-L1), However, PD-L1 inhibitor therapy did not achieve ideal objective remission rate [15]. Monoclonal drugs can specifically block the binding of PD-L1 on tumor cell membrane to T cell PD-1, but cannot block the action of PD-L1 in tumor cells. The high expression of PD-L1 in pancreatic cancer is not effective with monoclonal antibody treatment, suggesting that PD-L1 has a tumor-promoting regulatory mechanism independent of PD-1. Previous studies mostly focused on the PD-L1/PD-1 axis, believing that the function of PD-L1 is mainly to bind with PD-1 and act on T cells. Due to the short intracellular segment of PD-L1, few scholars have studied PD-L1 mediated signal transduction in tumor cells [6]. However, a recent study found that PD-L1 has the function of regulating RNA degradation [16]. This is consistent with the results of this study. Using PD-L1 as bait protein, we identified a number of potential PD-L1 interacting proteins through immunoprecipitation combined with mass spectrometry analysis. Because the cells used were pancreatic cancer cell lines without mesenchymal cells, all the interacting proteins identified were expressed by tumor cells. Using KEGG and GO analysis, we found that the genes corresponding to these proteins were enriched in RNA binding, ribosome, spliceosome and other biological processes or pathways. This finding suggests that PD-L1 may have a certain function as a signal molecule, which is worthy of further study.

This study focused on pancreatic cancer, but there are still some potential implications for additional types of cancer. Previous studies have reported that PD-L1 is correlated with the prognosis of breast cancer and colorectal cancer, which is consistent with the results of our study [11, 17]. We also found that PD-L1 is associated with immune cell infiltration in the tumor microenvironment, which has been confirmed in head and neck squamous cell carcinoma [18]. Finally, we found that PD-L1 binding proteins are enriched in the biological process of RNA binding. This result also coincides with a previous study based on colorectal and breast cancer cells [16].

Although this study provides clues and basis for in-depth discussion of the role of PD-L1 gene in pancreatic cancer, the occurrence and development of tumor is a complex regulatory process coordinated by multiple genes, and the specific mechanism of PD-L1 gene's involvement in the development of pancreatic cancer through the above pathways remains to be further clarified by follow-up studies.

In conclusion, this study revealed that PD-L1 gene is involved in the occurrence and development of pancreatic cancer as a pro-oncogene through the use of relevant bioinformatics methods, which is helpful to improve the monitoring strategy for the recurrence of pancreatic cancer patients after treatment, thus providing a new idea for early diagnosis and early treatment in clinical practice.