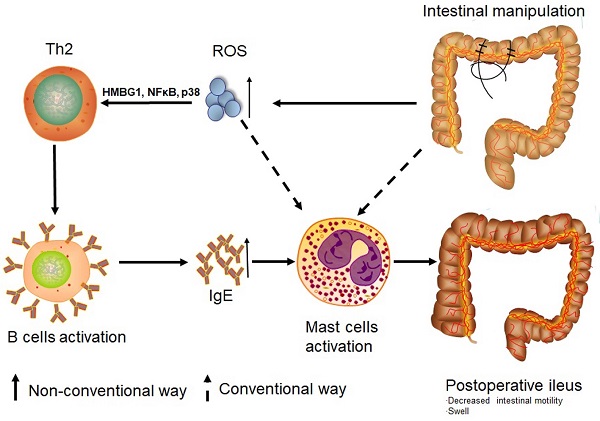 Rationale: Postoperative ileus (POI) is a frequent complication arising after gastrointestinal surgery but pathogenesis of POI is still not fully understood. While Th1 immune cells are implicated in POI, the involvement of Th2 cells has not yet been clarified. Given the impact of reactive oxygen species (ROS) in the regulation of Th1 and Th2 balance, we hypothesized that not only Th1 but also Th2 immune response can be involved in the development of experimental POI.

Methods: The intestinal transit test was performed using carbon gum arabic. Electron microscopy was employed to assess tissue morphology and the presence of immune cells. Cytokines, IgE and ROS were measured. Immune cells from Peyer's patches were analyzed by Flow Cytometry and toluidine blue staining was used for detection of mast cells. Transcriptional factors were analyzed by Western blot.

Conclusion: Th2 immune response can be involved in the activation of mast cells in POI, which was associated with ROS mediated activation of NF-κB and p38 MAPK signaling pathway.