Aims: IgA nephropathy (IgAN) is the most prevalent primary glomerulonephritis worldwide. We conducted this study to explore the relationship between serum bilirubin and renal outcome of patients with IgAN.

Methods: A total of 1492 biopsy proven IgAN patients were recruited and divided into two groups according to their median serum bilirubin concentration: the low bilirubin group (serum bilirubin≤9.7umol/L, n=753) and high bilirubin group (serum bilirubin>9.7umol/L, n=739). Basic clinical characteristics were assessed at the time of renal biopsy and the relationships between serum bilirubin and the combined endpoints were analyzed. The combined endpoints were defined as a 50% decline in estimate glomerular filtration rate (e-GFR), end-stage kidney disease (ESKD), renal transplantation and/or death. In addition, propensity score matching (PSM) was then performed to improve balance and simulate randomization between patients in different groups. Kaplan-Meier survival analysis was applied to explore the role of serum bilirubin in the progression of IgAN. Three clinicopathological models of multivariate Cox regression analysis were established to evaluate the association of serum bilirubin and renal prognosis of IgAN.

Conclusion: Serum bilirubin level may be negatively associated with the progression of IgAN.

Immunoglobin A nephropathy (IgAN) is featured by IgA diffusely depositing in the kidneys, which is the most prevalent primary glomerulonephritis worldwide. Nearly 15-40% of IgAN patients will progress to end stage renal disease (ESRD) within 20 years [1] .It is quite meaningful to identify risk factors related to the progression of IgAN. Early intervention of these factors may delay the development of IgAN. It is reported that the pathogenesis of IgAN is associated with oxidative stress [2-4]. The dynamic balance between oxidation and antioxidation has been destroyed in patients with IgAN [4]. It was reported that intrarenal immunoreactivity of heme oxygenase-1(HO-1) was increased in IgAN [5], which can degrade heme to produce carbon monoxide, iron and biliverdin (BV), which is reduced to bilirubin by biliverdin reductase [6]. Therefore, serum bilirubin is regarded as a powerful endogenous antioxidant. Many studies have clarified the role of serum bilirubin in diabetes mellitus, renal transplantation, stroke, cardiovascular and metabolic disease [7-9]. However, there still lack of research on the relationship between serum bilirubin and IgAN. Whether the level of serum bilirubin could be another predictor of progression of IgAN remains unknown. To clarify these issues, we conducted this study.

Biopsy-proven IgAN patients from West China hospital of Sichuan university between May 2009 and September 2019 were enrolled in this study. The Inclusion criteria were: (1) patients confirmed as IgAN by renal biopsy; (2) patients were followed up for at least 6 months or reached the endpoint of study; (3) patients ≥14 years old. The exclusion criteria applied were as follow: (1) patients with systemic disease, such as systemic lupus erythematosus (SLE), Henoch-Schönlein purpura (HSP), liver cirrhosis or disorder of liver function, malignancy etc.; (2) patients without complete renal biopsy or clinical data. Patients were followed up in the out-patient department of West China Hospital or by regular phone calls. The study was approved by the Ethical Committee of West China Hospital of Sichuan University. Informed consent was obtained from each patient or legal guardians prior to treatment.

Treatment regimens were decided by patients and their doctors according to the clinical and pathological features of the patients. All patients received optimal support treatment including full dose of ACEI/ARB. Glucocorticoids were used when there was persistent proteinuria (>1g/d) after optimal support treatment, 0.5-1mg/kg prednisone daily and tapering down gradually within 6-8 months. Immunosuppressants would be considered in patients with impaired kidney function (Scr>1.5 mg/dl) or rapidly progressive kidney function decline. Immunosuppressants included cyclophosphamide (2mg/kg daily for 3 months), mycophenolate mofetil (1-2g daily for 6-8 months), tacrolimus (0.03-0.05 mg/kg daily for 6-8 months) or cyclosporin (3-5 mg/kg daily for 6-8 months).

Participants were divided into two groups according to their median baseline serum bilirubin concentration: the low-bilirubin group (serum bilirubin≤9.7umol/L, n=753) and high-bilirubin group (serum bilirubin>9.7umol/L, n=739). To lessen the selection bias between different groups in this study, propensity score matching (PSM) was performed to adjust for sex, ALT, TG, TC, T, C, eGFR at a 1:1 ratio. PSM was conducted by “Match It” R package and the “nearest neighbor matching” method. A caliper of 0.18 propensity score standard deviation was used to match. Two-tailed p<0.05 was considered statistically significant. Categorical data were described as percentages and analyzed using the Chi-square tests. Continuous variables were expressed as mean ± SD or median (first-third interquartile range) and analyzed with the ANOVA, Student's t test or nonparametric Mann-Whitney U test. Kaplan-Meier survival analysis was performed using the log-rank test. The effects of clinical manifestations and pathological features on renal outcomes were assessed by mutivariate Cox regression analysis. All statistical analysis was performed by using IBM SPSS statistics 26.0 software.

Flow chart of the study. 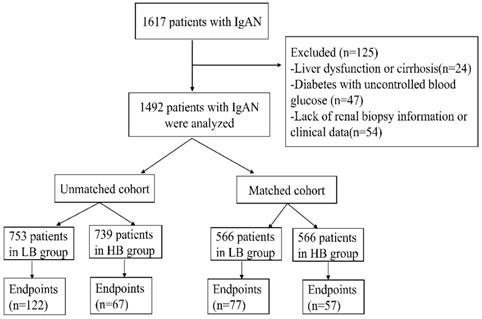 Although the detailed mechanism of IgAN still remains unknown, the role of oxidative stress in the pathogenesis has attracted more and more attention [2, 11, 12]. It was reported that the activation of intracellular signaling in mesangial cells cultured with aberrantly glycosylated IgA and in renal biopsies of IgAN patients basically results in oxidative stress [5]. Advanced oxidation protein products (AOPPs) are considered to be important mediators of inflammation [13, 14], which could activate monocytes to release myeloperoxidase and synthesize reactive oxygen species. Increased AOPPs levels were observed in IgAN patients [4, 13, 15]. Bilirubin, as a powerful endogenous antioxidant, plays an important role in oxidative stress. It can inhibit NADPH oxidase and further inflammatory reaction [9]. However, it is still do not know whether bilirubin has a role in IgAN progression.

In order to simulate randomization and improve balance on baseline variables, propensity score matching analysis was carried out. Multivariate Cox regression analysis was performed with several models consisted of demographics, clinical, pathological indexes and serum bilirubin level, which could contain more confounders to reduce selective bias. The results showed that serum bilirubin level was an independent risk factor in every model in both unmatched and matched cohort. Based on these results, serum bilirubin level could be recognized as a protective factor for long term prognosis of patients with IgAN. Previously, it was reported that serum bilirubin level was associated with the progression of IgAN [16, 17]. However, previous studies did not analyze the pathological changes, moreover, selective bias were not adjusted by PSM. Therefore, the results of this study are more reliable than previous studies.

Many studies focused on the relationship between serum bilirubin levels and some oxidative stress diseases including cardiovascular disease, diabetes, obesity [7-9]. The antioxidative characteristics of bilirubin might protect not only against the progression of CKD but also against loss of residual kidney function (RKF) in PD patients [18]. Elevated bilirubin concentrations were consistently associated with reduced vascular resistance [19, 20], improved eGFR [21], renal tubular function, and slowing of the progression of kidney damage [22]. In the animal experiments, the bilirubin-treated mice showed less fibrosis in the unilateral ureteral obstruction (UUO) model and bilirubin treatment decreased fibronectin expression in tubular epithelial cells [23]. Besides, it is reported that bilirubin interferes with vascular cell adhesion molecule1 (VCAM-1) and intercellular adhesion molecule1 (ICAM-1) to regulate atherosclerotic lesion formation and vascular inflammation both in animal and human models [9, 24]. Furthermore, bilirubin participates in immune response at several levels including modulation of regulatory T cells and T helper type 17 (Th17) cells, inhibition of the Toll-like receptor 4/nuclear factor kappaB signaling pathway, down-regulation of NLRP3 inflammasome [8, 24-26], which has been proved to be very important for IgA nephropathy in a previous study by our team [27].

However, there were still some limitations in our study. First, this was a single center study in China, the patients were mainly Han, Tibetan and Yi Chinese living in the southwest region of China, so it was not known whether our results had distinctive demographic or ethic characters. Second, though we adjusted for potential confounders which were likely to affect the association between serum bilirubin levels and kidney outcomes of IgAN patients, the effect of unadjusted factors such as serum ferritin, haptoglobin and the activity of the hemeoxygenase-1 (HO-1), could not be eliminated in current study. Third, the sample size was limited which may not avoid all bias.

In conclusion, serum bilirubin level may be negatively associated with the progression of IgAN, which could be applied as a novel predictor in clinic. Future multicenter and perspective studies are needed to confirm these findings and to investigate the underlying mechanisms.

The authors thank all of the participants and attending physicians for their contributions.

The datasets generated and/or analyzed during the current study are not publicly available due to privacy policy but are available from the corresponding author on reasonable request.

Additional informed consent was obtained from all individual participants for whom identifying information is included in this article.

This research was approved by the ethical committee of West China Hospital of Sichuan University.