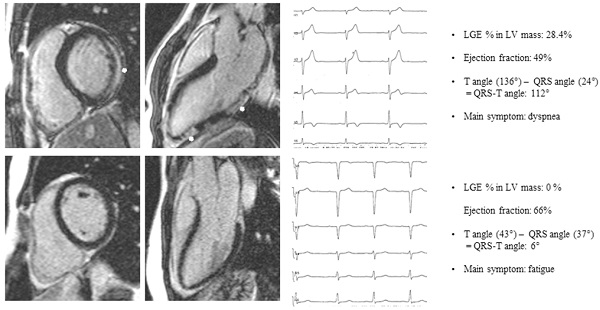 Objective: To investigate the association of a wide QRS-T angle on the surface ECG and late gadolinium enhancement on contrast-enhanced cardiovascular magnetic (CMR) imaging in patients with clinically suspected myocarditis.

Background: Diagnosis and risk stratification in patients with suspected myocarditis is particularly challenging due to a great spectrum of clinical presentations. Late gadolinium enhancement (LGE) visualizes myocardial necrosis and fibrosis in patients with biopsy-proven myocarditis. The presence or absence of late gadolinium enhancements in these patients is prognostically meaningful. The QRS-T angle from the surface ECG, on the other hand, may serve as a simple and easily available risk marker in suspected myocarditis.

Methods: We enrolled 97 consecutive patients that were referred to CMR imaging for a clinical suspicion of myocarditis. All patients obtained a standardized digital 12-lead ECG for the calculation of the QRS-T angle and underwent contrast-enhanced CMR imaging. Patients were divided into two groups according to the absence or presence of LGE on CMR.

Conclusion: A wide QRS-T angle of 90 degrees or more is linked to myocardial fibrosis or necrosis (late gadolinium enhancement) in patients with suspected myocarditis.

Diagnosis and risk stratification in patients presenting with acute myocarditis is especially challenging due to the great heterogeneity of clinical presentation. Disease progression ranges from mild chest discomfort with undisturbed left ventricular function to severe dyspnea and progressive heart failure or even sudden cardiac death [1-4].

The QRS-T-angle can be easily derived from the digital routine surface ECG. It represents the difference in the vectors of depolarization (QRS loop) and repolarization (T wave). Several observational studies in a variety of cardiac diseases have shown that the QRS-T-angle is a strong and independent prognosticator of adverse cardiac events including sudden cardiac death [5, 6].

Aim of this study was to investigate a possible association between an abnormal QRS-T-angle on the routine surface ECG and myocardial necrosis as visualized by LGE in patients with a clinical suspicion of myocarditis.

We prospectively enrolled 97 consecutive patients that underwent CMR at the Cardiovascular MRI Center, Department of Cardiology and Angiology, Elisabeth Hospital Essen, Germany for clinically suspected myocarditis. The indication for CMR was left the discretion of the referring physician, however was strong enough to qualify for CMR imaging. In general clinical presentations were anginal or pericarditic chest pain, symptoms of heart failure such as dyspnea or edema and more unspecific complaints such as fatigue or palpitations. Patients obtained a standardized 12-lead digital ECG on the day of admission at a referring hospital or using a Schiller Cardiovit AT 102 plus®. Computerized values of QRS and T-wave axis were given by the Schiller AT 102 plus® software. The frontal QRS-T-angle was calculated as the absolute difference between the frontal QRS- and frontal T-wave axes. With a value greater than 180°, 360° were subtracted in order to give a continuous variable ranging from 0° to 180°.

Cine and LGE images were evaluated masked to clinical data by two experienced observers. LV function was analyzed by outlining epicardial and endocardial borders on the short axis SSFP sequences. Papillary muscles were excluded from analysis. Left ventricular volumes and ejection fraction were derived from contour summation. The extent of late gadolinum enhancement was assessed on long and short axis contrast images by using the 17-segment model of the LV. To minimize the risk of overseeing LGE areas in short-axis images, long-axis cross correlation was performed routinely.

Baseline, ECG and CMR data stratified according to presence of myocardial fibrosis

Correlation of LGE as percentage of LVmass and the QRS-T angle was analysed using the two-sided non-parametric spearman-rho test. Receiver operating characteristic (ROC) analyses was performed to assess the diagnostic ability of the QRS-T angle greater than 90° to detect myocardial fibrosis in contrast-enhanced CMR. The association of the QRS-T angle and myocardial fibrosis in contrast-enhanced CMR was analyzed using a binary logistic regression model for a continuous variable and using the chi-square test for a categorical variable (QRS-T angle greater than 90°). 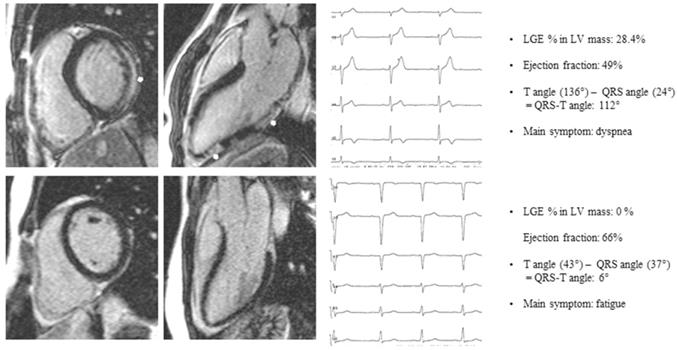 ROC analysis for a QRS-T angle greater than 90°. 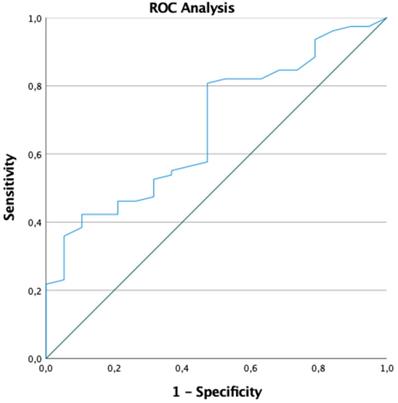 Our study shows that in patients with suspected myocarditis an abnormal QRS-T angle of 90 percent or more relates to myocardial damage on contrast-enhanced CMR.

The QRS-T angle can be readily calculated from every routine surface ECG and may serve as a simple risk marker in various settings [5,6,13,14,15,16,17]. LGE visualizes myocardial necrosis and fibrosis with high spatial resolution which in turn represents the substrate of conduction pathways for re-entrant ventricular tachycardia and predicts cardiac mortality and sudden cardiac death [18]. So far only a few studies linked the QRST-T angle to the presence and extent of LGE in patients with ischemic cardiomyopathy [19], myocardial infarction [20], hypertrophic cardiomyopathy [21] and myocarditis [22].

Nonspecific ST-segment and T-wave abnormalities are common findings in patients with acute myocarditis and in a few cases even pericarditis-like ST-segment elevation occurs, but unfortunately the sensitivity of the electrocardiogram for myocarditis is low (47%) [23]. In 587 patients with myocarditis Fischer et al. found an abnormal ECG in 78 percent [22]; an abnormal ECG, the QRS-T angle and a QRS-T angle of 90 degrees or more were associated with a combined clinical endpoint on univariate analysis. ECG abnormalities were more frequent in patients with LGE. A combination of ECG parameters and LGE showed incremental prognostic power. Study inclusion was based on the diagnostic criteria suggested by the European Society of Cardiology Working Group on Myocardial and Pericardial Disease [24] including clinical presentations, ECG changes, troponine elevation and functional abnormalities on cardiac imaging.

In contrast inclusion in our study was driven by the clinical judgement of the referring physician, however clinical indication was obviously strong enough to justify advanced cardiac imaging. This approach reflects the real world of CMR as the absence of LGE rules out prognostically significant myocarditis [9,10]. No advanced imaging techniques such as T1 mapping [25] were part of our CMR protocol, however advanced techniques are not yet standardized and are available only on a limited number of CMR scanners. In particular non contrast strain-encoded CMR could be of interest in this patient group as recent research indicates a promising role of strain imaging in the risk stratification of patients with heart failure [26]. The concept behind contrast-enhanced CMR in myocarditis patients is that scar by LGE is the pathophysiological substrate of ventricular tachycardia and sudden cardiac death on the one hand and ventricular remodelling and progressive heart failure on the other hand. Against this background the proof of concept of any ECG parameter against LGE on CMR is particularly helpful. The QRS-T angle is such a promising ECG marker as the QRS-T angle can be easily calculated from every routine, digital surface ECG. The QRS-T angle represents the difference between the electrical vectors of depolarization and repolarization, which probably accounts for its prognostic potential in various clinical situations.

Given the diversity of clinical scenarios in patients with myocarditis and the fast, bedside and cheap availability of ECG, any ECG marker that relates to myocardial injury is extremely helpful. A wide QRS-T angle may serve as an additional marker that qualifies for CMR imaging to support initial diagnosis or justify more intensive follow-up. In our study cohort of 97 patients with clinically suspected myocarditis referred to CMR a wide QRS-T angle was linked to myocardial injury (LGE).