The incidence of renal impairment is growing, and the condition is not only a direct threat to health but also an important risk factor for cardiovascular disease [1-3]. Among patients hospitalized for acute myocardial infarction (AMI), renal impairment is also an important predictor of cardiovascular complications, including heart failure, arrhythmia and coronary arterial restenosis [1, 4]. Previous studies have mainly focused on patients with preserved renal function, while patients with renal impairment have either been undervalued or excluded from clinical trials [3, 4]. Additionally, in consideration of comorbidities and contrast-induced nephropathy, patients with renal impairment may be delayed to revasculization or receive less optimal therapies for AMI than those with preserved renal function [3-6]. Given advances in treatment, including prompt coronary reperfusion and guideline-directed medical therapy (GDMT), including antiplatelet agents, beta-blockers, statins and inhibitors of the renin-angiotensin-aldosterone system, the short-term morbidity and mortality for patients with AMI has improved, but the long-term effect on post-AMI cardiac remodeling and survival remains largely unknown [6]. In this five-year longitudinal study, we comprehensively investigated the influence of renal function on drug therapy, post-AMI short- and long-term cardiac structure, cardiac function, and outcomes among AMI patients receiving percutaneous coronary intervention (PCI).

From January 2014 to December 2017, we retrospectively collected information on 643 hospitalized patients with AMI. The diagnosis was validated by two of the following three criteria: (1) history of prolonged ischemic chest pain, (2) evolutionary changes in the ST segment and/or T wave, and (3) dynamic elevation of serum cardiac enzymes such as cardiac troponin and/or creatine kinase-muscle/brain (MB). All studied patients received PCI as reperfusion therapy. Clinical information regarding comorbidities and prescriptions for cardiovascular medications were also obtained. Smoking was defined as current or former and hyperlipidemia as receiving lipid-lowering therapy or either total cholesterol >200 mg/dl or serum triglycerides >150 mg/dl [7]. Serum creatinine and estimated glomerular filtration rate (eGFR) levels were obtained at the time of admission for AMI. Patients were categorized into three groups in accordance with their renal function as eGFR by the Cockcroft-Gault equation (Group 1: severely impaired eGFR<30, Group 2: mildly impaired 30≤eGFR<60, Group 3: potentially at risk 60≤eGFR<90 and Group 4: normal eGFR ≥ 90 ml/min/1.73m2). Patients, who were lost to follow-up, had a poor imaging window, died during the same hospitalization, received coronary bypass surgery or were under dialysis were excluded. Angiographic stenosis was defined as >50% stenosis, and indication for PCI was >70% narrowing of the coronary artery luminal diameter. The median follow-up duration was 41 (interquartile range: 22-60) months. The study was conducted in accordance with the tenets of the Declaration of Helsinki and approved by the Review Board of Chi-Mei Hospital (CV code: 10410-002).

In accordance with the recommendations of the American Society of Echocardiography [8], echocardiography was performed with a 3.5-MHz multiphase-array probe and GE Vivid E9 system (Vingmed Ultrasound AS, Horten, Norway) by the cardiologists in charge. The chamber dimensions (LVEDVi = left ventricular end diastolic volume index; LVESVi = left ventricular end systolic volume index) and left ventricular mass index (LVMi) were measured using the two-dimensionally guided M-mode method, and LV ejection fraction (LVEF) was measured using the biplane Simpson's method. In addition, LV diastolic function-associated parameters, including the transmitral early filling velocity (E) to atrial velocity (A) ratio, were also measured. Echocardiography was performed during hospitalization and within one year post-AMI to evaluate the subsequent changes in cardiac geometry and function.

According to a medical review, the following clinical outcomes were analyzed: cardiovascular mortality, heart failure (HF) requiring hospitalization, recurrent AMI, ventricular arrhythmia, and coronary revascularization owing to stent thrombosis or restenosis. The diagnosis was validated by at least three cardiologists in a blinded manner.

Continuous data are presented as the mean ± standard deviation or median (interquartile range), depending on the distribution. Dichotomous data are presented as numbers and percentages. The chi-squared test or Fisher's exact test was used to compare categorical variables as appropriate. Group differences were analyzed using analysis of variance, including post hoc analysis and multiple testing adjustment. The Kaplan-Meier method with log-rank test was used to compare event-free rates between groups. A univariate Cox regression analysis was performed to evaluate factors associated with mortality. Factors with p <0.1 based on univariate analysis were included in multivariable Cox regression analysis to identify independent risk factors for endpoints. Given that AMI includes ST elevation MI and non- ST elevation MI, as a sensitivity test, we also focused on the analyses of patients diagnosed of ST elevation MI to evaluate whether our findings are consistent in different populations. All analyses were performed using SPSS, version 18 for Windows (SPSS Inc., Chicago, IL, USA). 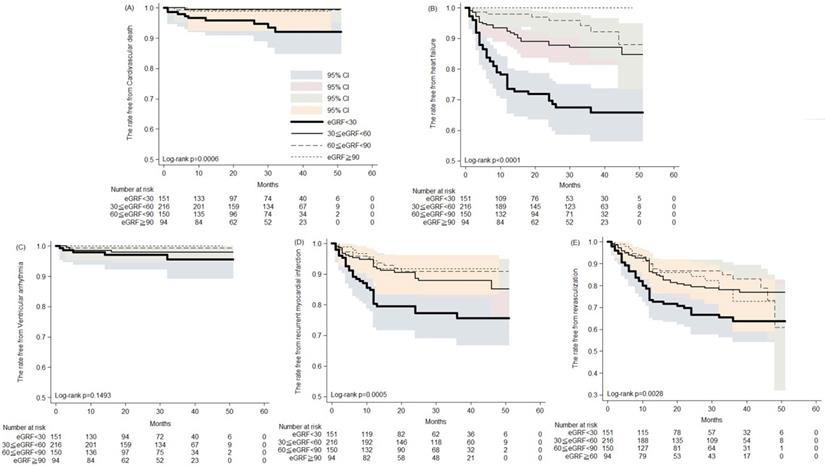 Despite more significant lesions at LAD, it is noteworthy that before discharge, patients with renal impairment received less GDMT. Among patients with severe renal impairment, only 90%, 54.3%, 56.3% and 45.6% were prescribed antiplatelet agents, statins, angiotensin-converting enzyme inhibitors/angiotensin receptor blockers (ACEis/ARBs) and β-blockers, respectively. Conversely, in patients with preserved renal function, the prescription rates were much higher at 100%, 81.9%, 79.8% and 76%, respectively.

Abbreviation as listed in Table 1.

There are some limitations of this study. First, in a retrospective study design, the endpoints were not collected at the same time window after the initial admission while it may introduce a bias in the assessed outcomes. Second, given the limited number of patients diagnosed of ST elevation MI, the Cox regression analysis was not performed in this population. Despite abovementioned limitations, our research indicates an urgent need to improve the quality of care in patients with concomitant AMI and renal impairment [13].

Among patients hospitalized for AMI, renal impairment not only interferes with the clinical decision of GDMT and coronary interventions but also plays a pivotal role in post-AMI cardiac remodeling and cardiovascular outcomes. Our findings highlight the need to pay more attention to AMI patients with renal impairment.