Prediction of lymphovascular space invasion in patients with endometrial cancer 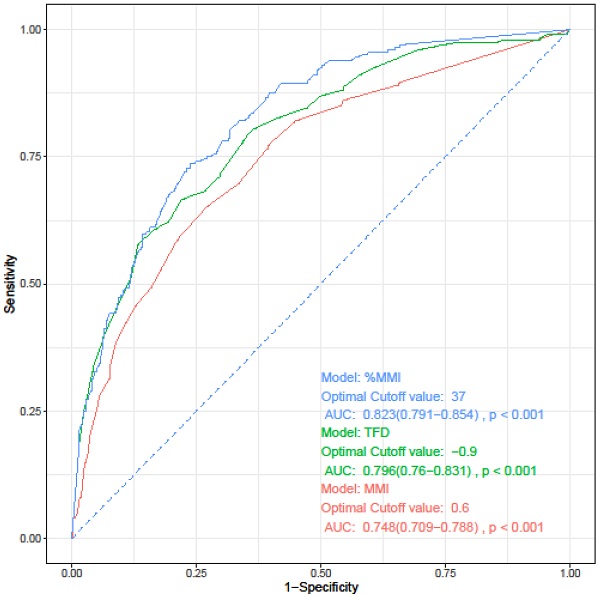 Objective: Predict the presence of lymphovascular space invasion (LVSI), using uterine factors such as tumor diameter (TD), grade, and depth of myometrial invasion (MMI). Develop a predictive model that could serve as a marker of LVSI in women with endometrial cancer (EC).

Methods: Data from 888 patients with endometrioid EC who were treated between January 2009 and December 2018 were reviewed. The patients' data were retrieved from six institutions. We assessed the differences in the clinicopathological characteristics between patients with and without LVSI. We performed logistic regression analysis to determine which clinicopathological characteristics were the risk factors for positive LVSI status and to estimate the odds ratio (OR) for each covariate. Using the risk factors and OR identified through this process, we created a model that could predict LVSI and analyzed it further using receiver operating characteristic curve analysis.

Conclusion: Using the modified risk index of LVSI, it is possible to predict the presence of LVSI in women with endometrioid endometrial cancer. Our prediction model may be an appropriate tool for integration into the clinical decision-making process when assessed either preoperatively or intraoperatively.

Endometrial cancer (EC) is the most common cancer of the female reproductive tract in developed countries [1]. According to the American Cancer Society, 66,570 new cases and 12,940 deaths are expected in the United States in 2021 [2]. In Korea, the incidence of endometrial cancer has been increasing, and it is now the most common gynecological cancer [3, 4].

Surgery is usually the primary treatment for EC, which consists of total hysterectomy and bilateral salpingo-oophorectomy with lymph node assessment [5]. In the past, a full lymphadenectomy, including the pelvic and para-aortic nodes, was recommended in all patients with EC. However, many studies have reported that lymphadenectomy is associated with increased morbidity and no survival benefit in low-risk EC patients [6-8].

Thus, a more selective and tailored lymphadenectomy is recommended to prevent overtreatment.

LVSI, the presence of cancer in lymphatic and/or vascular spaces within the uterine myometrium, is considered an essential prerequisite for lymphatic dissemination [15]. Numerous studies have shown the strong correlation between LVSI, lymph node metastasis, and nodal recurrence [16-19]. As LVSI is a poor prognostic factor in EC, it is important to determine the presence of LVSI during the decision-making process before performing a lymphadenectomy [20, 21]. However, due to the inherent limitations of intraoperative frozen section (IFS) analysis, it is usually difficult to determine the presence of LVSI until the final pathology report is available [22, 23].

Previous studies have reported a positive correlation between the presence of LVSI and other risk factors, such as tumor diameter (TD), grade, and depth of myometrial invasion (MMI) [24-26]. Based on this background information, we considered an indirect method to predict the presence of LVSI, using uterine factors such as TD, grade, and depth of MMI. The objective of this retrospective study was to develop a predictive model that could serve as a marker of LVSI in women with EC.

This retrospective, multicenter study was performed with approval from the Institutional Review Board of the Catholic University of Korea (Approval No. XC21RIDI0051). The requirement for informed consent was waived owing to the retrospective nature of the study. The study was conducted in accordance with the principles of the Declaration of Helsinki.

This study included patients from six different hospitals, who were diagnosed with endometrial cancer and underwent primary surgical treatment, including total hysterectomy, between January 2009 and December 2018. Patients with non-endometrioid type of endometrial cancer, such as serous, clear cell, mixed type, and carcinosarcoma, were excluded. Other exclusion criteria were as follows: patients who did not undergo hysterectomy or received neoadjuvant treatment prior to hysterectomy.

Electronic medical records of the patients were reviewed to collect information such as age, body mass index (BMI), Eastern Cooperative Oncology Group (ECOG) performance status, medical comorbidities such as hypertension or diabetes, and date of the primary surgery. Pathology reports of the primary surgical treatment were reviewed for obtaining the International Federation of Gynecology and Obstetrics (FIGO) stage, FIGO grade, histologic type, TD, depth of MMI, LVSI, and lymph node metastasis. TD was defined as the largest diameter of the tumor. The percentage of myometrial invasion (%MMI) was defined as the deepest point of the myometrial invasion divided by the total uterine wall thickness in the same plane. Patients in whom the exact size of the tumor could not be determined from the pathology report were excluded. The exact size of the tumor could not be determined if the tumor exhibited a diffuse endometrial surface spread or if it was fragmented during the process of removal of the uterus by morcellation during laparoscopic surgery. Patients without an exact percentage of myometrium involvement were also excluded.

We assessed the differences in the clinicopathological characteristics between patients with and without LVSI. Fisher's exact test and chi-square test were used to compare the categorical variables. Continuous variables were compared using the Student's t-test or Mann-Whitney test. We performed univariate logistic regression analysis to determine which clinicopathological characteristics were the risk factors for positive LVSI status. Multivariate logistic regression analysis was subsequently used to estimate the odds ratio (OR) for each covariate. Variables with a P value less than 0.05 in the univariate analysis were included in the multivariate analysis.

Baseline characteristics of the patients in the two study groups.

All values are expressed as the median (range) or number (%). Numbers marked in bold indicate p-values less than 0.05, which is considered statistically significant.* The time period from the date of surgery to the date of last adjuvant treatment administration. LVSI, lymphovascular space invasion; BMI, body mass index; FIGO, International Federation of Gynecology and Obstetrics.

Baseline characteristics of the patients

Development of a prediction model for lymphovascular space invasion

Based on the results of multivariate logistic regression analysis, we developed a simplified LVSI prediction model for clinical use. We defined the “LVSI index” as “TD×%MMI×tumor grade×cervical stromal involvement.” TD (cm) and %MMI were calculated as absolute numbers. In case of tumors with only endometrial surface invasion without myometrial invasion, %MMI was scored as 1, and not as 0. We scored FIGO grade 1 as 1, grade 2 as 1.5, and grade 3 as 4. Absence of cervical stromal involvement was scored as 1 and presence as 2.5. Each score was weighted according to the ORs derived from the multivariate analysis. We calculated the LVSI for all patients in the study group and assessed the diagnostic accuracy using ROC curve analysis. The AUC was 0.839 (95% CI= 0.809-0.869; sensitivity, 74.1%; specificity, 80.5%; negative predictive value, 47.3%; positive predictive value, 8.6%; P < 0.001), and the optimal cut-off value was 200. DeLong's test was used to compare the LVSI and logit models, and showed that the two models were similar (P = 0.584) (Figure 1).

The depth of myometrial invasion is known to be related to both lymphovascular space involvement and prognosis. Three parameters have been proposed for measuring the myometrial invasion: depth of MMI, %MMI, and tumor free diameter (TFD). TFD refers to the distance from the deepest point of myometrial invasion to the uterine serosa [27, 28]. Before developing a prediction model for LVSI, we investigated which of these three indicators best reflects LVSI. We performed univariate and multivariate logistic regression analyses, which were performed separately for each parameter while maintaining other variables as they were. All three parameters were confirmed as independent risk factors for LVSI (data not shown). On performing ROC curve analysis for the three parameters, %MMI was identified as the most useful parameter for predicting LVSI (Figure 2, Table 3). 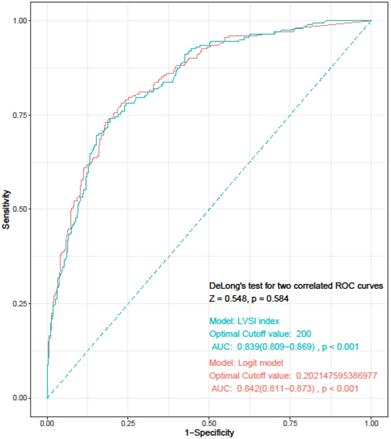 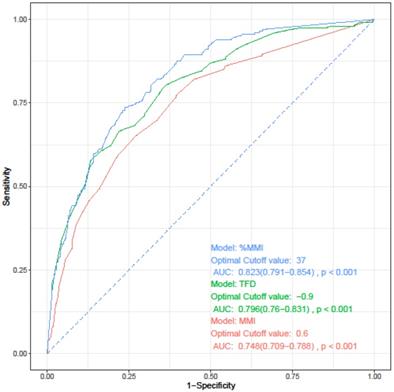 However, our LVSI index is different from that presented by Meydanli et al. First, we included the presence of cervical stromal invasion in the LVSI index as a risk factor. Second, we did not categorize the PTD but scored it as an absolute value. In our study group, the optimal cutoff point of PTD for predicting LVSI was identified as 2.7 cm on ROC curve analysis; however, categorization of patients with PTD of 2.7 cm was not significant in multivariate analysis (OR 1.466, 95% CI 0.933-2.302, P = 0.097). Third, we scored grade 1 tumors as 1, whereas grade 2 and grade 3 tumors were scored as 1.5 and 4, respectively, as described in the methods section. We adopted the “risk of LVSI index” suggested in a prior study into our study group and compared it with our LVSI index. ROC curve analysis and DeLong's test showed that our LVSI index had a higher accuracy than the “risk of LVSI index” for predicting the presence of LVSI (AUC 0.839 vs. 0.825, DeLong's test p = 0.022) (Supplementary Figure 1).

However, the accuracy of IFS analysis for TD, grade, and depth of MMI remains controversial. Karabagli et al. reported the reliability and accuracy of IFS analysis [33]. The IFS results were in agreement with those of permanent section in 89.9 %, 88.6 %, and 100 % cases for grade, depth, and cervical invasion, respectively. On the other hand, in a study performed by Kumar et al., the IFS results were in disagreement with the permanent section results in 35% cases for the grade, 28% for the depth of myometrial invasion, and 13% for cervical involvement [22].

Factors responsible for inaccuracy of IFS analysis include erroneous interpretation, technical artifacts introduced by the frozen section technique, and inadequate sampling [34]. Quinlivan et al. claimed that involvement of pathologists with specific expertise or interest in gynecological pathology in IFS analysis resulted in a higher accuracy rate. Evaluating multiple sections may also decrease the sampling errors [35]. The accuracy of IFS analysis determines the real diagnostic performance of our model in the intraoperative setting.

Our study has several limitations. Firstly, the retrospective design may result in an inherent bias. Secondly, there was a lack of central pathology review. Finally, our findings depend on the final pathology results.

The strength of this study lies in the large number of patients with uniform endometrioid histology. As the clinical applicability of a prediction model is crucial, our model depends on well-known uterine factors obtained from the primary hysterectomy specimen, such as the tumor diameter, grade, and percentage of MMI, which can also be assessed by IFS analysis.

In conclusion, using the modified risk index of LVSI, it is possible to predict the presence of LVSI in women with endometrioid EC. Our prediction model may be an appropriate tool for integration into the clinical decision-making process when assessed either preoperatively or intraoperatively.