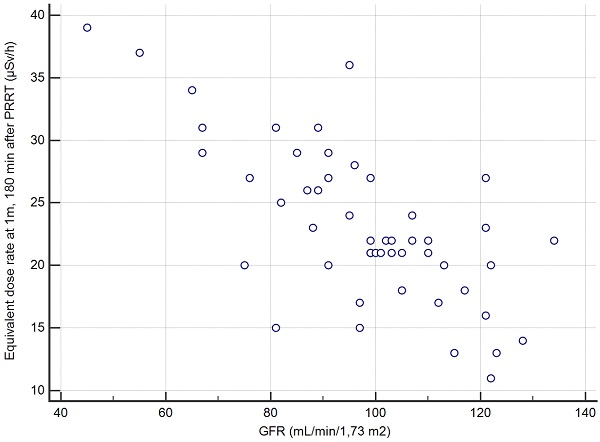 Rationale: Peptide receptor radionuclide therapy (PRRT) with 177Lu-DOTATATE (oxodotreotide) results in external radiation exposure from the patient. In the PREELU observational prospective study, we determined the equivalent dose rate at 1 m of the patient (EDR-1m) for a period following PRRT. The main objective was to predict which patients could be discharged from the hospital at approximately 3 h after the administration of 177Lu-DOTATATE, i.e. at the end of the infusion of amino-acids according to our PRRT protocol. As presenting no undue risk of radiation exposure for the public, those patients could be treated as outpatients or day patients, rather than inpatients.

Methods: We sequentially measured EDR-1m facing the sternum and then the pelvis during 50 PRRT in 24 patients with metastatic neuroendocrine tumours, each 30 minutes after ending administration of Lutathera, over at least 180 minutes.

Results: 180 minutes after the administration of ca. 7400 MBq of Lutathera, EDR-1m was <40 µSv/h in all cases, and <25 µSv/h in 32 cases (64%). After an overnight hospital stay, EDR-1m was <25 µSv/h in all cases. The EDR-1m value measured facing the sternum was the greatest in about one-fourth of paired measurements. In patients whose creatinine clearance was >96 mL/min/1.73m2, the EDR-1m was most likely (predictive value=90%) to drop below 25 µSv/h within 180 minutes after the administration of Lutathera. In 16 patients who benefited from several PRRT cycles, the creatinine clearance did not decrease significantly from one cycle to the next, probably due to the kidney protection by the amino-acid infusion. The patients whose EDR-1m dropped below 25 µSv/h at 180 minutes during their first PRRT cycle were unlikely (predictive value= 88%) to decease during the following two years.

Conclusion: All patients could have been discharged 3 h after administration according to the criterion EDR-1m <40 µSv/h. Using EDR-1m <25 µSv/h as criterion, an extended hospital stay beyond 3 h would have been necessary in around one-third of the PRRT treatments and could be anticipated based on creatinine clearance ≤96 mL/min/1.73m2. EDR-1m <25 µSv/h at 180 min during the first PRRT yielded a strong predictive value on the patient's survival at two years, a finding that should be confirmed in future studies.