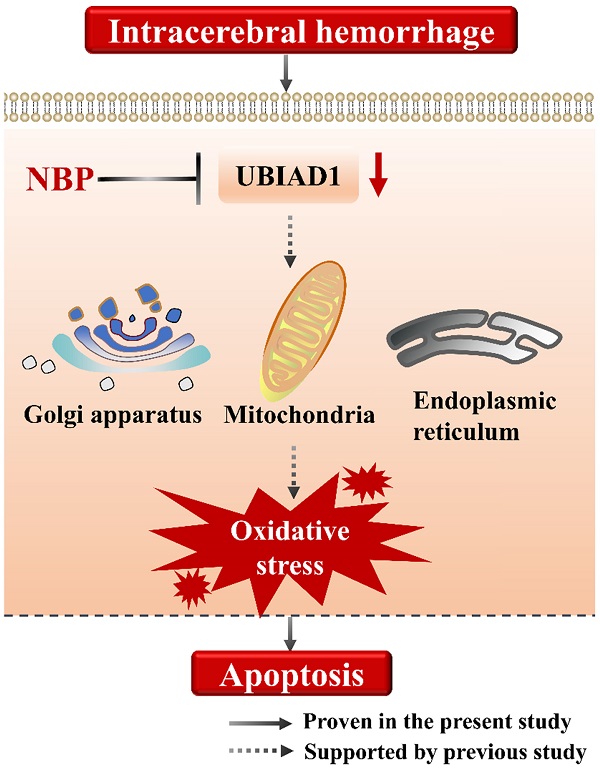 Intracerebral hemorrhage (ICH) is a devastating type of stroke with high morbidity and mortality, and the effective therapies for ICH remain to be explored. L-3-n-butylphthalide (NBP) is widely used in the treatment of ischemic stroke. However, few studies evaluated the therapeutic effects of NBP on ICH. Therefore, the present study aims to evaluate the effects of NBP on ICH and its potential mechanism. The rats were randomly divided into sham-operated group, saline-treated (ICH + saline) group, and NBP-treated (ICH + NBP) group. The ICH model of SD rats induced by IV collagenase was established. The modified Garcia JH score was used to detect the neurological deficit in rats. Western Blot and immunohistochemistry analysis was applied to test the levels of UBIAD1 and caspase-3 expressions in the perihematomal region. The rates of apoptotic cells were detected by TUNEL staining. The results showed that NBP up-regulated the expression of UBIAD1, reduced the apoptotic cells in the perihematomal region, and improved the neurological deficit. Taken together, our study added some new evidence to the application of NBP in ICH treatment.

Intracerebral hemorrhage (ICH), also known as hemorrhagic stroke, is a serious subtype of stroke with high mortality and disability rate [1, 2]. The injury mechanism of ICH can be divided into primary injury and secondary injury [2-4]. Among them, primary injury refers to brain damage caused by the volume effect of hematoma and physical compression. Strategies to reduce primary injury usually include controlling blood pressure or correcting abnormal blood coagulation to prevent further expansion of hematoma or remove or dissolve blood clots through open and minimally invasive surgery. However, apart from the possible benefits of surgical treatment of ICH, the benefits of surgical treatment have not yet been confirmed in clinical trials in the United States. Secondary injury refers to the physiological reaction of hematoma (mainly edema and inflammation) and the toxic effects of blood components. Strategies to reduce secondary injury include anti-inflammatory reactions such as celecoxib and pioglitazone [5]. Reduce the toxic effects of hemoglobin and iron such as iron chelator [6], anti-apoptosis such as citicoline [7]. Although the research and trials on the treatment of ICH are increasing, the mortality rate is still high. Hematoma puncture and drug treatment are currently expected by the public, but these methods are still in clinical trials, so there is an urgent need for new effective treatments and drugs.

L-3-n-butylphthalide (NBP) is a drug independently developed in China. A large number of experiments and clinical studies have confirmed that NBP and its derivatives can reduce infarct size [8], protect mitochondrial damage [9], anti-apoptosis [10], antioxidant stress [11], and promote neurogenesis of newborn neurons [12]. In addition to being used in the treatment of ischemic stroke, NBP has been proved to be effective in other symptoms or diseases, such as dementia [13-15], Parkinson's disease [16], and Alzheimer's disease [17]. Previously, we demonstrate that NBP inhibits the expression of TNF-α and MMP-9, thereby reducing inflammatory reactions, blood-brain barrier damage after ICH [18]. However, the possible molecular mechanism of NBP remains further research.

UBIAD1 (UbiA prenyltransferase domain-containing 1), also known as TERE1 (transitional epithelial response gene 1), is located on chromosome 1p36.11-36.33 [19, 20]. UBIAD1 is are widely found in the brain, lung, heart, liver, kidney, vascular endothelium, colon, bladder, and other tissues. They are indispensable enzymes in the biosynthesis of Vitamin K-2 and CoQ10 [21, 22]. With the deepening of research, more and more attention has been paid to the role of UBIAD1 in cell metabolism and maintaining internal environment stability [23, 24]. UBIAD1 can also regulate the activity of eNOS and play a specific cardiovascular protective role [22, 25]. These studies show that UBIAD1 and its catalytic products play an important role in regulating cell proliferation, apoptosis, and oxidative stress, and these mechanisms are closely related to the mechanism of cerebral ischemia-reperfusion and cerebral hemorrhage injury. Previously, we discussed the expression and role of UBIAD1 in an ischemic stroke model, and it has been confirmed that UBIAD1 overexpression has an obvious protective effect on OGD/R-induced cells in vitro model [26]. However, there is no study to explore the expression and role of UBIAD1 in ICH.

In the present study, the SD rat cerebral hemorrhage model induced by IV collagenase was established. We explored the neuroprotective effect of NBP by measuring the neurological deficit score and cell apoptosis in SD rats after ICH, and further studied the expression and role of UBIAD1 in ICH, which provide a new theoretical basis and direction for the prevention and treatment of ICH.

The experiment follows the 3R principle (reduction, replacement, and refinement) put forward internationally for animal experiments, and conforms to the relevant contents of the guiding opinions on being kind to Experimental Animals. All animal experiment procedures are approved by the Animal Experiment Center of Hunan Provincial People's Hospital. A total of 72 healthy male SD rats (weight: 250-300g) were randomly divided into three groups: a sham-operated group (n=24), ICH group (n=24), and ICH + NBP group (n=24). Each group was further randomly divided into four subgroups, named as 6h, 24h, 72h, and 7d subgroups. ICH model was established by injecting IV collagenase into the brain. and then the SD rats of the intervention group were intraperitoneally injected with NBP (25mg/kg, twice a day) [27], and the other two groups were intraperitoneally injected with the same dose of sterilized normal saline. The animals were killed and brain tissues were obtained at each terminal time point.

Using the double-blind method, the neurological function of the rats in the three groups was evaluated by the modified Garcia JH method before being killed at each corresponding time point. The neurobehavioral study consisted of the following six tests: Spontaneous Activity, Symmetry in the Movement of Four Limbs, Forepaw Outstretching, Climbing, Body Proprioception, and Response to Vibrissae Touch [28]. The minimum neurological score is 3 and the maximum is 18. The lower the score means the more severe the neurological deficit.

The protein was extracted from the tissue around the hematoma with RIPA lysate, and the concentration of the sample protein was detected according to the operation steps of the BCA protein quantitative kit. After the separation gel and concentrated gel are prepared, the sample begins to be electrophoretic and then transferred to a membrane by a transfer apparatus at 300mA for 40 min (caspase3) or 60 min (UBIAD1 and β-actin). The closed membrane was put into the working solution of the primary antibody at 4℃ overnight. Subsequently, the membranes were incubated with the diluted secondary antibodies for 1.5h. Apply ECL chemiluminescence solution (Thermo) evenly on the membranes, incubate for 3 minutes, exposed, and then fixed. The exposed negatives were scanned and protein was visualized by professional grayscale analysis software-quantity one.

The severity of damaged cells around the hematoma was detected by the one step TUNEL apoptosis assay kit (Beyotime Institute of Biotechnology, NanTong, JiangSu, China). Briefly, the paraffin slices were baked in the oven and dewaxed in xylene and alcohol successively. And it placed in sodium borohydride (30min) and Sudan black staining solution (10min), Each sample was added with 50uL endogenous affinity blocking Solution A and B and incubated at room temperature for 20min, and sealed with 5% BSA for 60 minutes, followed by incubation with TUNEL reaction buffer. Being stained by DAPI at 37℃ for 10 min, Finally, the sections were observed by a fluorescence microscope (FluoView FV3000; Olympus Corporation, Tokyo, Japan). In perihematomal region of brain section, we counted the number of DAPI/TUNEL double-positive cells and DAPI-positive cells in 5 regions of each brain section. To evaluate the proportion of injury, we calculated the ratio of DAPI/TUNEL double-positive cells to DAPI-positive cells.

After dewaxing in xylene and alcohol, the paraffin sections were immersed in citrate buffer to repair the antigen, and then 3% H2O2 was added to room temperature for 10 minutes. Then, the sections were incubated with primary antibodies (caspase3, UBIAD1) at 4℃ overnight. The secondary antibody was used for incubation for 30min at 37℃. and then the DAB regent was added and incubation at room temperature for 1-5min. The section images were analyzed by Image-Pro-Plus6.0 software.

3.2. NBP reduces the apoptosis after ICH

3.3. NBP upregulates the expression of UBIAD1 after ICH

3.4. UBIAD1 has an anti-apoptotic effect 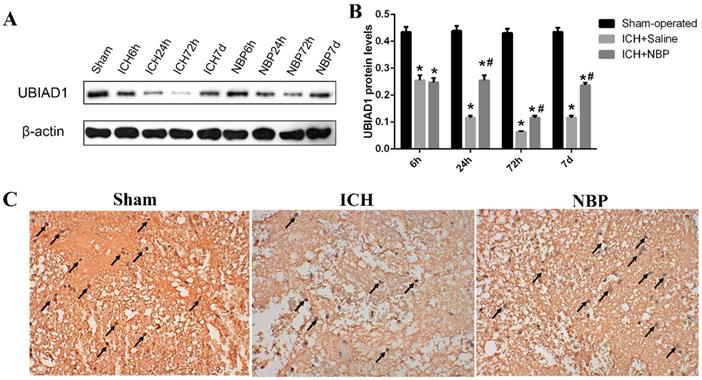 The preclinical studies revealed that NBP exerts neuroprotective effects in ischemic stroke both in vivo and in vitro, partially by promoting angiogenesis [30], increasing BDNF expression [12], promoting dendrite development [31], protecting mitochondrial function [9], inhibiting neuroinflammation [32], and improving brain metabolism [33]. The clinical trials also demonstrated that NBP exerts anti-ischemic effects in patients. According to the results of a multicenter phase 2 and phase 3 randomized controlled clinical trials, NBP was approved by the State Food and Drug Administration of China as a drug for the treatment of ischemic stroke in 2002, which has shown good safety and tolerance. A randomized, double-blind, double-dummy trial suggested the 90-day treatment with NBP could improve outcomes at the third month after acute ischemic stroke [34]. A meta-analysis revealed that the combination of NBP and standard anti-ischemic stroke drugs is more effective than standard drugs for patients with ischemic stroke [35]. However, it is currently uncertain whether or not NBP has a functional role in ICH. Previously, we confirmed that the neuroprotective effect of NBP may be related to inhibiting the expression of TNF-α and MMP-9, and down-regulating oxidative stress and DNA damage after ICH [18]. Meanwhile, other studies suggested that NBP can up-regulated the expression of VEGF and angiopoietins-2 (Ang-2) proteins [36], and decreased the expression of AQP4 [37]. Collectively, the cellular and molecular mechanism of NBP protection in ICH includes promoting neovascularization, attenuating inflammation response, and decreasing brain edema. However, whether other molecular mechanism is involved in the effects of NBP remains elusive.

Collectively, we suggested that the cell apoptosis in perihematomal tissue after ICH could be rescued by NBP administration, the possible mechanism may be related to the up-regulating the expression of UBIAD1 (Figure 6). There were several limitations in this study. First, only modified Garcia JH method applied, which might not be optimal for long-term assessment of neurobehavioral function after ICH. Second, the signaling pathways of UBIAD1 regulating the cell apoptosis in ICH model needs to be further explored. Third, the sample size is small. It would be significant to perform the examination of this treatment in a large cohort for subsequent confirmation.

Our study in an in vivo model provides evidence that NBP exerts neuroprotective effects on ICH.

A schematic representation of the proposed mechanism of NBP therapy in ICH. In the present study, we suggested that the cell apoptosis and down-regulated UBIAD1 after ICH could be rescued by NBP administration. We previously demonstrated that UBIAD1 could attenuated oxidative stress by protecting the mitochondria, Golgi apparatus, and endoplasmic reticulum. Collectively, NBP therapy is a promising approach for the management of ICH. 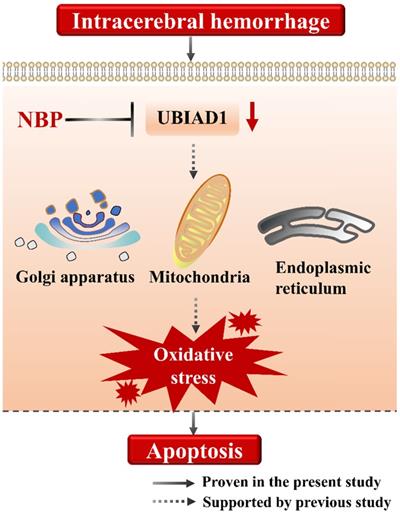 All animal procedures were approved by the Animal Experiment Center of Hunan Provincial people's Hospital.

27. Hu J, Wen Q, Wu Y, Li B, Gao P. The effect of butylphthalide on the brain edema, blood-brain barrier of rats after focal cerebral infarction and the expression of Rho A. Cell biochemistry and biophysics. 2014;69:363-8