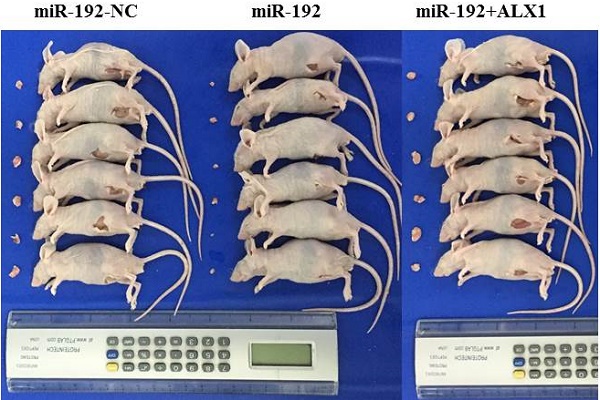 Methods: The methylation status of miR-192-5p in tissue samples and cell lines, was examined using bisulfite sequencing PCR. miR-192-5p expression was also measured. EC cell lines transfected with specifically designed vectors overexpressing miR-192-5p, its target gene ALX1 or both, were constructed. Tumorigenicity of these cell lines were examined by in vitro and in vivo experiments. Dual-luciferase reporter assay were employed to verify the target of miR-192-5p.

Results: The promoter region of miR-192-5p gene was highly methylated and its expression significantly repressed in EC samples. Moreover, a higher level of promoter methylation as well as a lower expression of miR-192-5p, was significantly associated with advanced Federation of Gynecology and Obstetrics stage and shorter disease-free survival in patients with curatively resected EC. Functional studies demonstrated that miR-192-5p overexpression inhibited in vitro tumor progression, in vivo tumorigenicity and the expression of several oncoproteins that was highly related to epithelial-to-mesenchymal transition. ALX1 was verified as a direct target of miR-192-5p and demonstrated to mediate the tumor-suppressive function of miR-192-5p.

Conclusion: miR-192-5p is a tumor suppressor miRNA that is epigenetically silenced by promoter methylation and may serve as a potential prognostic biomarker in EC.