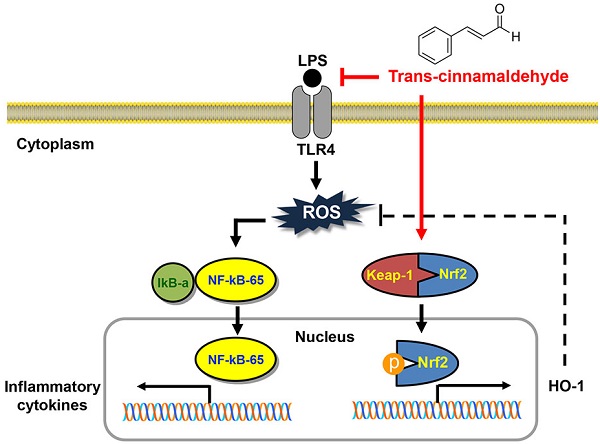 Background: Trans-cinnamaldehyde (tCA), a bioactive component found in Cinnamomum cassia, has been reported to exhibit anti-inflammatory and antioxidant effects, but its efficacy in muscle cells has yet to be found. In this study, we investigated the inhibitory effect of tCA on inflammatory and oxidative stress induced by lipopolysaccharide (LPS) in C2C12 mouse skeletal myoblasts.

Results: tCA significantly inhibited the LPS-induced release of pro-inflammatory mediators and cytokines, which was associated with decreased expression of their regulatory genes. tCA also suppressed the expression of Toll-like receptor 4 (TLR4) and myeloid differentiation factor, and attenuated the nuclear translocation of nuclear factor-kappa B (NF-κB) and the binding of LPS to TLR4 on the cell surface in LPS-treated C2C12 cells. Furthermore, tCA abolished LPS-induced generation of ROS and expression levels of ROS producing enzymes, NADPH oxidase 1 (NOX1) and NOX2. However, tCA enhanced the activation of nuclear translocation of nuclear factor-E2-related factor 2 (Nrf2) and the expression of heme oxygenase-1 (HO-1) in LPS-stimulated C2C12 myoblasts. In addition, tCA showed strong protective effects against NO and ROS production in LPS-injected zebrafish larvae.

Conclusions: Our findings suggest that tCA exerts its inhibitory ability against LPS-induced inflammatory and antioxidant stress in C2C12 myoblasts by targeting the TLR4/NF-κB, which might be mediated by the NOXs and Nrf2/HO-1 pathways.