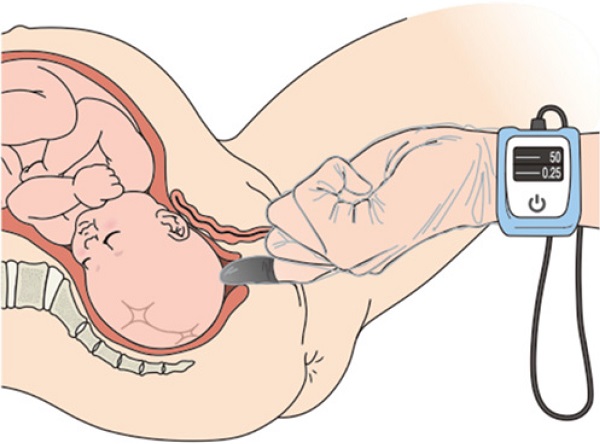 Materials and methods: We enrolled 78 pregnant Japanese women who underwent an elective cesarean section at ≥36 weeks' gestation. After combined spinal and epidural anesthesia were administered to the mother, fetal StO2 levels were measured by tissue oximetry using an examiner's finger-mounted sensor during a pelvic examination immediately before the cesarean section. We measured the neonatal StO2 levels at 1, 3, and 5 minutes after birth and retrospectively compared the fetal and neonatal StO2 levels with the incidence of subsequent diagnoses of neonatal respiratory disorders.

Conclusions: The StO2 values in the RD group were lower than those in the NR group at 3 and 5 minutes after birth, suggesting that neonates with low StO2 levels soon after birth may be predisposed to clinically diagnosed neonatal respiratory disorders.

The 2015 American Heart Association/American Academy of Pediatrics/International Liaison Committee on Resuscitation (AHA/AAP/ILCOR) guidelines recommend the use of pulse oximetry for measuring oxygen saturation (SpO2) during resuscitation because neonatal appearance and skin color (i.e., cyanosis) are poor indicators of neonatal hypoxia [6,7]. However, pulse oximetry does not provide an accurate signal immediately after birth [7-10]. The failure of pulse oximetry to obtain blood oxygen saturation (SpO2) measurements within 5 minutes of life has been pointed out [8,9]. Moreover, van Vonderen [11] reported that during the first 2 minutes after birth, pulse oximetry frequently displays a newborn heart rate that differs from that obtained by a simultaneous electrocardiogram.

In the present study, we hypothesized that fetal and neonatal StO2 levels measured by tissue oximetry using an examiner's finger-mounted NIRS sensor are low among neonates diagnosed with respiratory disorders after low-risk, term cesarean deliveries. This study specifically aimed to longitudinally measure fetal and neonatal StO2 levels (immediately before delivery and 1, 3, and 5 minutes after birth) in low-risk, term elective cesarean sections.

We utilized a novel tissue oximetry system that measures regional StO2 levels noninvasively using the spatially resolved NIRS. The wavelengths of the light from the light-emitting diodes (LEDs) were 770 and 830 nm (KN-15, ASTEM Co., Ltd., Kawasaki, Japan) (Figure 1A). A probe containing a sensor was mounted on an examiner's finger and covered by a sterile polyethylene glove (Singer disposable gloves, Utsunomiya Seisaku Co., Ltd., Osaka, Japan) to protect against infection. Light detectors were located 6 and 8 mm from the LEDs. We determined the oxyhemoglobin, deoxyhemoglobin, and StO2 values by using the spatially resolved NIRS [12]. The novel tissue oximetry device enabled us to noninvasively and immediately measure regional StO2 levels when the examiner touched the finger-mounted sensor to a target region, such as the fetal and neonatal head [15-17]. 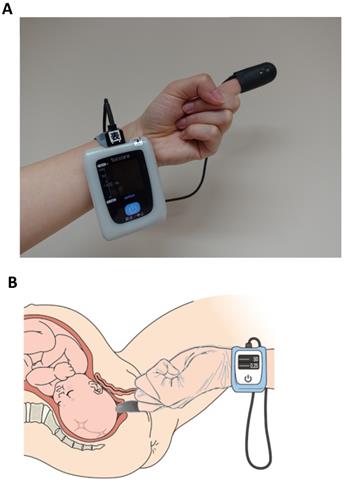 Fetal and neonatal StO2 levels were measured for at least 5 seconds until the values stabilized. The values were measured after the combined spinal and epidural anesthesia was administered to the mother before the cesarean section (Figure 1B) and at 1, 3, and 5 minutes after delivery [15-17]. Because the fetal StO2 levels were measured during an elective cesarean section before the onset of labor, some cervical canals were still immature and partially opened. Therefore, probes mounted on the examiner's finger might have touched the maternal tissues (StO2 levels around 60%) instead of the fetal tissues (around 40%). Therefore, we measured the StO2 levels of the uterine cervix separately and excluded the subjects if the StO2 levels were more than 55% by analyzing the receiver operating character (ROC) curve (Supplementary material). All the subjects were measured by a maternal-fetal medicine specialist (KK). Routine neonatal care was given according to the 2015 AHA/AAP/ILCOR guidelines. Neonates who were clinically determined by neonatal specialists as needing any respiratory support on admission were retrospectively classified as belonging to the group with neonatal respiratory orders (the RD group), whereas the remaining neonates were classified as belonging to the NR group.

This research related to human use complied with all the relevant national regulations and institutional policies, and in accordance with the tenets of the Helsinki Declaration, was approved by the authors' institutional review board. The Ethics Committee of the Hamamatsu University School of Medicine (Registration number 19-048) approved this study, and all participants provided written informed consent.

After screening 78 mothers for eligibility, we subsequently enrolled 35 mothers (Figure 2). Among the 35 neonatal cases, 7 were retrospectively classified as having a neonatal respiratory disorder (RD group), whereas the remaining 28 were categorized as having no such disorder (NR group). We compared the fetal and neonatal StO2 of both groups (Table 1, Figure 3A). Neonatal StO2 values were obtained in all 35 neonates; however, fetal StO2 values were only obtained in 28 neonates (RD group, n = 6; NR group, n = 22). Perinatal background, such as maternal age, gestational weeks, birth weight, umbilical arterial pH, and Apgar scores, were similar between the RD and NR groups. Notably, 85.7% of neonates in the RD group required resuscitation, including continuous positive airway pressure, positive pressure ventilation, oxygen supplementation, and/or intubation, but only 17.9% of those in the NR group required resuscitation (Table 1).

There were no statistically significant differences in fetal StO2 values or neonatal StO2 values at 1 minute after birth between the two groups (Table 1, Figure 3A). 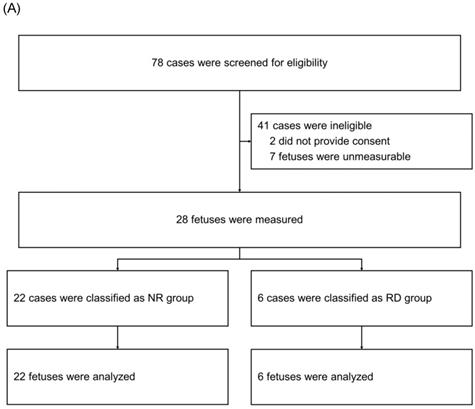 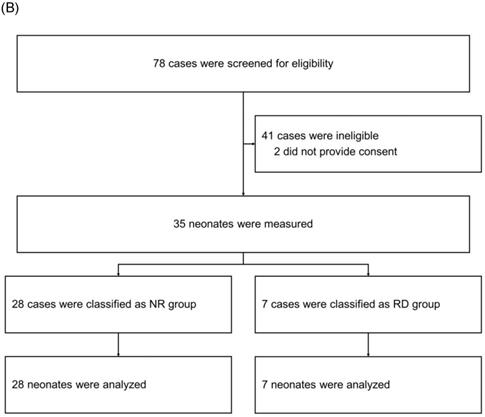 The 2015 AHA/AAP/ILCOR guidelines recommend the use of conventional pulse oximetry during resuscitation; however, pulse oximetry takes several minutes to obtain a reliable signal, especially immediately after birth [7-10]. Therefore, this method is not considered diagnostically useful because it remains unclear whether neonatal oxygenation levels during the first several minutes after birth as measured by pulse oximetry are reliable. Watanabe et al. [17] demonstrated that reliable StO2 levels measured by tissue oximetry (KN-15) could be obtained earlier than SpO2 levels measured by conventional pulse oximetry. We recently reported the ability to measure neonatal StO2 at 5 minutes after vaginal delivery [16], but in the present study, we successfully measured neonatal StO2 in all cases at 1, 3, and 5 minutes after cesarean birth. In the previous studies using tissue oximetry (KN-15), the mean or median value of StO2 at 5 minutes after vaginal delivery was approximately 55% [16,17], which was similar to the median value of 54.0% at 5 minutes after cesarean delivery in the current study's NR group. Meanwhile, the reference ranges for neonatal SpO2 in cesarean births were lower than those in vaginal births [9,19,20]. The reference value for SpO2 at 5 minutes after cesarean birth was reportedly 85% (60%-94%) [20]. Similar devices using NIRS have also been used for measuring neonatal oxygenation immediately after birth; however, not all the values obtained by such devices have been reliable [21-23]. Median values for the cerebral tissue oxygen saturation index (NIRO-200NX, Hamamatsu Photonics K.K., Hamamatsu, Japan) and for the regional cerebral tissue oxygen saturation (INVOS 5100, Somanetics Corp, Troy, MI, USA) were 65.6% and 66.8%, respectively. These values were higher than the StO2 values [22,23].

In this study, the neonatal StO2 values measured at 3 and 5 minutes after birth were significantly lower in neonates clinically diagnosed with subsequent neonatal respiratory disorders than in those without respiratory disorders. As mentioned, elective cesarean delivery at term is a risk factor for developing neonatal respiratory disorders such as TTN and respiratory distress syndrome as compared with vaginal delivery at term [1,2]. However, TTN has had no established criteria for diagnosis and continues to be diagnosed multilaterally according to clinical findings such as tachypnea and respiratory distress and imaging findings such as chest radiograph and ultrasonography [4,5,24,25]. In a previous study, there were no significant differences in neonatal SpO2 values at 10 minutes after birth between neonates with TTN and those in a control group [26]. The present findings suggest that the cutoff values of 43% (3 minutes), and/or 45% (5 minutes) might be useful in identifying newborns at high risk for developing subsequent neonatal respiratory disorders after cesarean delivery (Figure 4). A large multicenter study is necessary to reconfirm the cutoff values. The present findings suggest that the assessment of StO2 within 5 minutes after birth might provide guidance to help improve neonatal resuscitation, especially after an elective cesarean section. We have no clear explanation as to why fetal StO2 values in the RD group were higher than those in the NR group.

The present study, however, has some limitations. First, neither the neonatal SpO2 nor the partial pressure of arterial oxygen was available because the subjects were scheduled for low-risk elective cesarean sections. Second, some newborns in the RD group required resuscitation, including supplemental oxygen and positive pressure ventilation, while fewer newborns in the NR group required resuscitation, thereby possibly affecting the difference in StO2 levels. The StO2 values were measured independently by the author and concealed from the clinicians. Third, we only enrolled cases of elective cesarean section; therefore, further studies are necessary in cases of emergency cesarean section and vaginal delivery. Moreover, the present subjects underwent elective cesarean section without any clinical findings of nonreassuring fetal status. Our research group is conducting an ongoing study of the predictive value of low StO2 before an emergency cesarean section in cases of nonreassuring fetal status.

Tissue oxygen saturation (StO2) values measured in fetuses and neonates who were subsequently diagnosed with or without respiratory disorders (RD and NR groups, respectively) at 1, 3, and 5 minutes after delivery. Fetal StO2 values were not significantly different between the 2 groups. At 3 and 5 minutes after delivery, the NR group had significantly higher StO2 values than the RD group (panel A). StO2 values measured in the NR group increased significantly (panel B), whereas those in the RD group did not change significantly (panel C). Box plots represent the lowest datum that is still within 1.5 interquartile range (IQR) of the lower quartile, the lower quartile, the median, and the upper quartile; the highest datum was still within 1.5 IQR of the upper quartile. Gray boxes represent the RD group, and the white boxes represent the NR group. P values were calculated using the Welch t-test or the Friedman test, and the Wilcoxon signed-rank test for post hoc analysis adjusted with the Holm method. 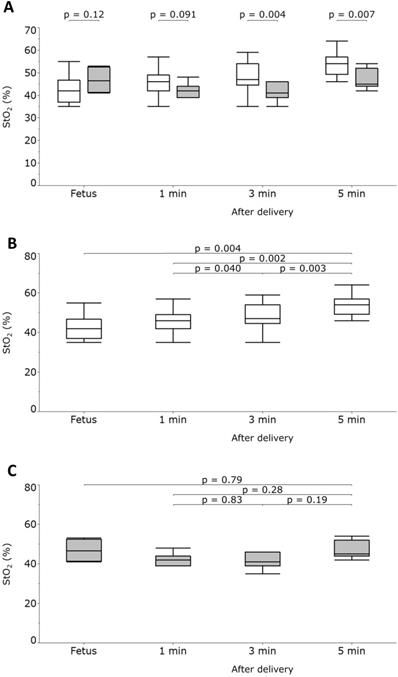 Receiver operating characteristic (ROC) curve analysis of neonatal tissue oxygen saturation (StO2) values measured at 3 minutes (panel A) and 5 minutes (panel B) after birth. The cutoff values of 43% and 45% for distinguishing neonates who were and were not subsequently diagnosed with respiratory disorders were obtained by calculating the maximal Youden's J statistic in ROC curve analysis. The areas under the curve were 0.821 and 0.849 for the 43% and 45% cutoff values, respectively.

In conclusion, neonatal StO2 data were obtained in all cases after scheduled cesarean delivery. Neonatal StO2 values measured at 3 and 5 minutes after birth were significantly lower in neonates who were subsequently diagnosed with neonatal respiratory disorders than in those who were not, suggesting that neonates with low StO2 levels soon after birth might be predisposed to subsequent clinically diagnosed neonatal respiratory disorders.