Results: In total, 110 and 38 patients were assigned to open surgery and MIS groups. After a medical follow-up of 42.1 months, the groups showed similar survival outcomes (recurrence rate, DFS, and OS). However, in patients with tumor size >2 cm, recurrence rate was significantly higher in MIS group (22.5% vs 0%; p=0.008). And in patients with tumor size >2 cm, MIS group showed significantly poorer DFS than open surgery group (p=0.017), although OS was similar between the two groups (p=0.252).

In 2018, the prior 2014 International Federation of Gynecology and Obstetrics (FIGO) staging system for cervical cancer was revised. Stage IB disease is now divided into 3 substages and lymph node status is incorporated into stage IIIC disease [5].

This retrospective cohort study was performed with approval from the institutional review board of The Catholic University of Korea (No.VC20RISI0080). Informed consent was waived for this study considering its retrospective nature.

We excluded patients with any of the following characteristics from our analysis: (1) underwent incomplete surgical staging; (2) underwent fertility-sparing surgery, or vaginal total hysterectomy; (3) received radiation therapy or neoadjuvant chemotherapy prior to surgery; (4) had histologic types other than squamous cell carcinoma, adenocarcinoma, or adenosquamous carcinoma; and (5) had insufficient clinical and/or pathologic data. Following the revised 2018 FIGO staging, we excluded patients with pathologically confirmed parametrial invasion, which is stage IIB, and pelvic and/or para-aortic lymph node metastasis, which is stage IIIC.

In our patients, after surgery, adjuvant therapy was selectively implemented according to the stage and presence of risk factors such as involvement of resection margin, LVSI, stromal invasion, and tumor size. The uterine manipulator was used during the surgery on case by case basis. The diagnosis of cervical cancer was confirmed histologically in all patients before surgery. Patients diagnosed with cervical cancer commonly underwent preoperative magnetic resonance imaging (MRI) and/or positron emission tomography-computed tomography (PET-CT) and/or computed tomography (CT) to assess the local tumor extent, lymph node metastasis, and distant spread.

The clinicopathologic characteristics of the patients are presented in Table 1.

Clinopathological characteristics of patients according to surgical approach

No differences were found between conventional laparoscopy and robotic surgery (Table 3).

Survival outcomes in study population. All patients. (A) disease-free survival, (B) overall survival 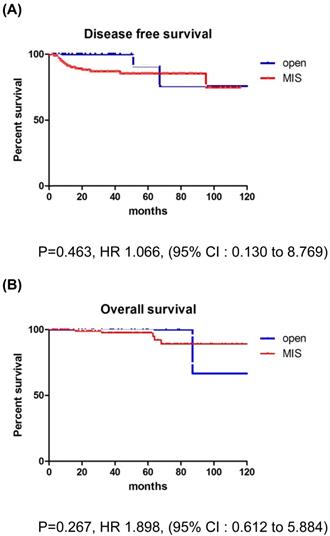 Factors associated with oncologic survival outcomes according to surgical approach 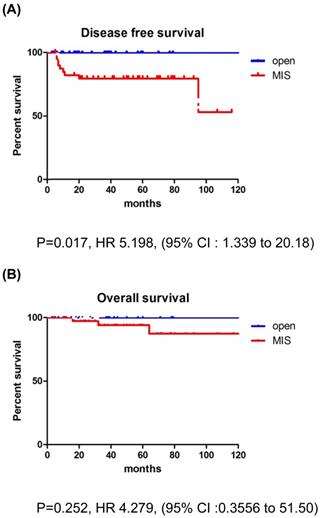 The use of MIS in gynecologic oncology has gradually increased since the first report in 1992 [14]. Compared to open surgery, MIS is superior in terms of reduced operative morbidity and postoperative complications [15]. Additionally, in numerous retrospective studies, MIS showed comparable survival outcomes [10, 11, 16, 17]. However, these results were completely contradicted by the LACC trial [12]. Although there are some controversies surrounding the results of the LACC trial, this is the only randomized clinical trial comparing survival outcomes between MIS and open surgery [18, 19]. The unexpected results from the LACC trial led the NCCN and ESGO to change the treatment guidelines for early stage cervical cancer, which influenced the treatment protocol at many centers [6, 13].

In this hospital-based retrospective analysis, we compared the oncologic outcomes of MIS and open surgery for the treatment of early stage cervical cancer. In our overall cohort, we observed some differences in clinicopathologic characteristics between the two groups. The majority of patients in MIS group were in stage IB1, whereas they were in stage IB2 in the open surgery group. Among the intermediate risk factors, tumor size and the rate of deep stromal invasion were significantly different between the two groups. This led to a significant difference in the rate of adjuvant treatment.

In our overall cohort, which included tumors of all size, both DFS and OS showed comparable outcomes between the groups. These findings contradict the results of the LACC trial. However, in patients with tumor size >2 cm, our results were consistent with the results of the LACC trial; the MIS group showed a significantly higher recurrence rate and worse DFS than the open surgery group.

In our overall cohort, the recurrence rates were 5.3% in the open surgery group and 13.6% in the MIS group. Recurrence rates were higher than those in the LACC trial in both groups. In the LACC trial, recurrence rates were 2.2% and 8.5%, respectively [12]. The different results can be explained as we had included patients in stage IIA2 and IB3 with bulky tumor mass. In patients with tumor size >2 cm, 9 of 40 patients (22.5%) in the MIS group experienced recurrence. Conversely, no recurrence was found in the open surgery group. Stump recurrences were more frequent among recurrences in the MIS group in the overall cohort. Further, in patients with tumor size > 2 cm, 8 of the 9 recurrences occurred in the vaginal stump. Higher recurrence rates in the MIS group and high rates of stump recurrence can be explained by several factors. The first factor is the use of uterine manipulator. This might cause a breakdown of the tumor and promote dissemination. Second, intracorporeal colpotomy can cause tumor exposure and promote dissemination. In our study, a uterine manipulator was used on case by case basis, and intracorporeal colpotomy was used in most cases. These surgery- or surgeon-related factors may cause an increased risk of recurrence in the MIS group. Kanao et al. reported a no-look no-touch technique to prevent intraoperative tumor spillage. The no-look no-touch technique includes the following measures: First, creation of a vaginal cuff; second, manipulation of the uterus without insertion of a uterine manipulator; third, minimal handling of the uterine cervix; and last, bagging the specimen. They compared the surgical and oncologic outcomes of total laparoscopic radical hysterectomy with the no-look no-touch technique to abdominal radical hysterectomy; surgical outcomes were superior in the former technique, and oncologic outcomes were similar in both techniques [20].

Our study has several limitations. First, due to the retrospective study design, there may have been inevitable issues such as selection bias. Second, the sample size may have been insufficient to properly compare DFS and OS between the two groups. Third, due to the surgeon's affinity for MIS, the rate of MIS was extremely high. Fourth, variations in technique, expertise, and outcomes among surgeons were not considered. Fifth, operative morbidity according to the surgical approach was not evaluated.

In conclusion, in patients with tumor size >2 cm, MIS was associated with higher recurrence rates and poorer DFS than open surgery. Thus, this retrospective study supports the results of the LACC trial. However, in patients with a tumor size ≤2 cm, MIS did not seem to compromise oncologic outcomes. Thus, MIS should be performed in highly selected patients with careful implementation of the surgical technique. Additionally, before making a decision on the route for radical hysterectomy, the results of the LACC trial should be informed to every patient.