Incidence and treatment of adult femoral fractures with osteogenesis imperfecta: An analysis of a center of 72 patients in Taiwan

Methods: We enrolled 72 patients with OI who were older than 18 years at MacKay Memorial Hospital between January 2010 and December 2018. Femoral fracture incidence, non-union rate, and treatment modality were analyzed.

Conclusion: Adults with OI tended to develop femoral fractures and non-unions. Adults with type 4 OI were particularly at high risk for non-unions in shaft fractures with conservative treatment.

Osteogenesis imperfecta (OI) is a rare connective tissue disease characterized by increased bone fragility and is also known as brittle bone disease. In addition, 90% of patients with OI have mutations in the COL1A1 or COL1A2 gene, which encodes for alpha-1 and alpha-2 chains in type 1 collagen [1]. Fractures and skeletal deformation are easily seen in patients with OI because bone tissue is mainly composed of type 1 collagen [2]. OI is also characterized by blue sclerae, dentinogenesis imperfecta, hyperlaxity, hearing loss, and short stature [3-5].

According to clinical variability and pattern of inheritance, Sillence classification has four OI types (types 1-4) (Table 1) [6]. Additional types have been added later, and type 5 is accepted worldwide. Type 1 is the mildest form of OI, and patients usually have blue sclerae and frequently have dentinogenesis imperfecta. Type 2 is a perinatal lethal form. Type 3 is the most severe (non-fatal) form of OI with multiple fractures, progressive deformity, and short stature. Patients are often wheelchair bound. Type 4 has a variable degree of deformity with normal sclerae. Patients with type 4 OI have increased fracture risk. The most frequent type in OI is type 1. Type 5 is characterized by mild to severe weak bones. Progressive calcifications of the interosseous membrane of forearm and lower leg are observed. Some patients also develop hyperplastic callus formation after fractures [3]. Bone fragility and fracture risk increase in the following order: Type 1 < Types 4, 5 < Type 3 < Type 2 [7].

This retrospective study was conducted in the OI expert clinic for adults at MacKay Memorial Hospital, Taipei, Taiwan. Patients with OI with a femoral fracture at age 18 years or older were retrieved from January 2010 to December 2019. We excluded patients with an osseous primary tumor, metastatic disease, or prednisone use due to an increased fracture risk. Radiographs were taken due to recent bone fracture or localized pain, suggesting possible fracture. All patients (n=72) were confirmed the diagnoses by molecular analysis. Molecular diagnosis was performed using a combination of Sanger sequencing and targeted resequencing directed to scan the entire coding sequence. The publicly available databases DGV (Database of Genomic Variants), DECIPHER (Database of Chromosomal Imbalance and Phenotype in Humans Using Ensembl Resources), OMIM (Online Mendelian Inheritance in Man), PubMed, ClinVar and the UCSC Genome Browser were used to compare the present findings with previous reports and evaluate the morbidity of the candidate gene. 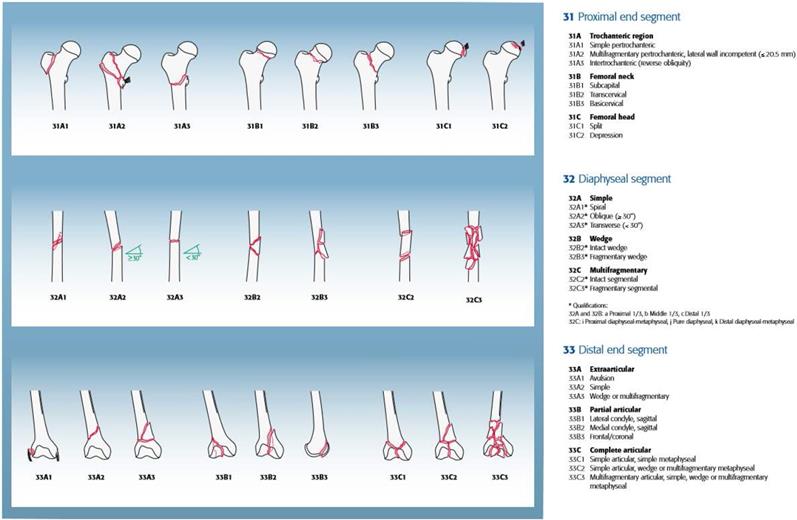 A descriptive study was conducted because this study contains a relatively small number of subjects. Descriptive statistics were used to analyze the results using SPSS version 22.0 (SPSS, Inc., Chicago, IL). Categorical variables were expressed as percentage, and metric variables as mean and standard deviation.

Influence of treatment on healing rate 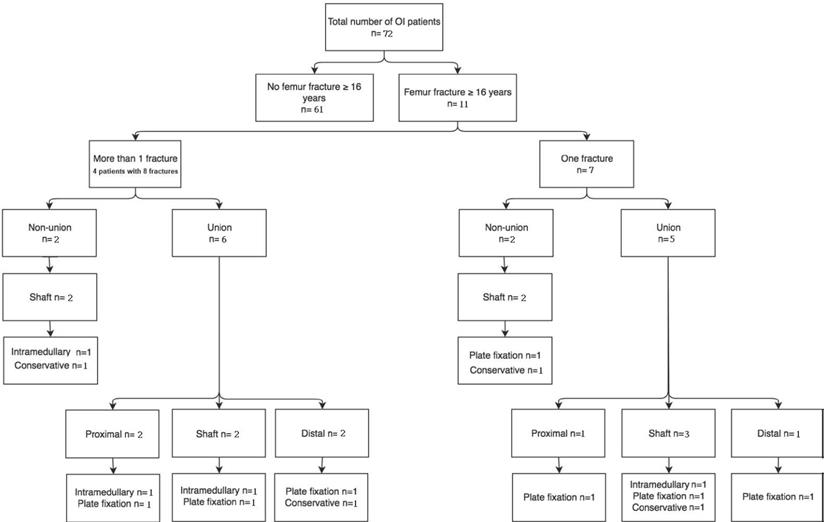 A 33-year-old type 4 OI female suffered a left shaft femur fracture with plate fixation treatment in December 2015, resulting in union. (a) Just finished operation in December 2015 (b) Follow up in August 2016. 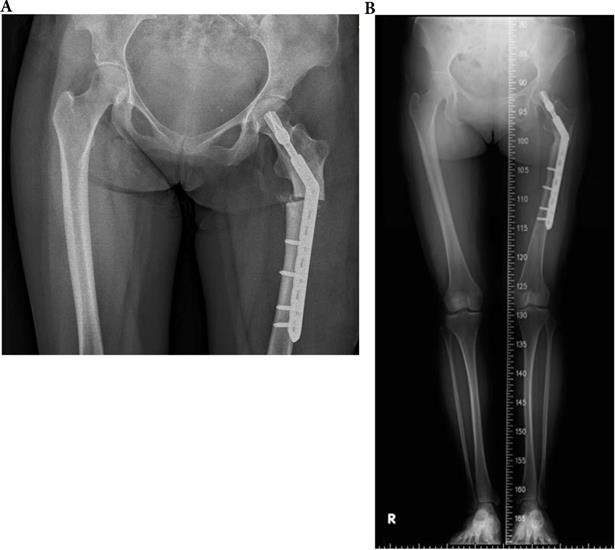 A 71-year-old female patients with type 4 OI had right midshaft femoral fracture with intramedullary nailing treatment in November 2014, which resulted in union. (a) Pre-operation fracture picture (b) Follow up in May 2016. 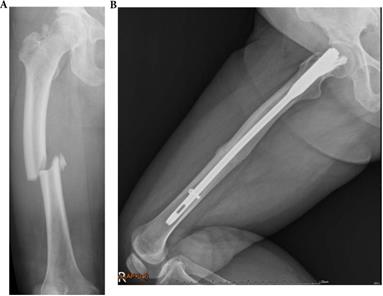 A 23-year-old female with type 4 OI had left distal femoral fracture with intramedullary nailing treatment in July 2016, which resulted in union. (a) Two weeks after operation (b) Follow up in July 2017. 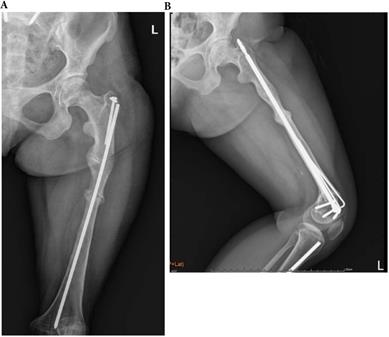 Data are presented as mean ± standard deviation or number of patients and percentages of group.

A 61-year-old type 4 OI female suffered a right midshaft femur fracture with intramedullary nailing treatment in August 2018, resulting in non-union. (a) Pre-operation fracture picture (b) Follow up in December 2019. 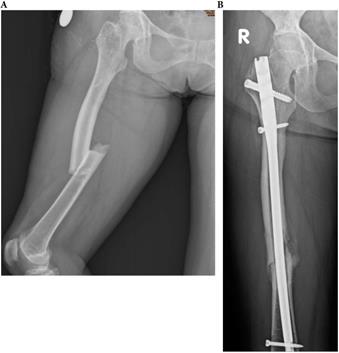 A 29-year-old type 3 OI female suffered a right shaft femur fracture with intramedullary nailing treatment in March 2012, resulting in non-union. (a) Just finished operation in March 2012 (b) Follow up in April 2013. 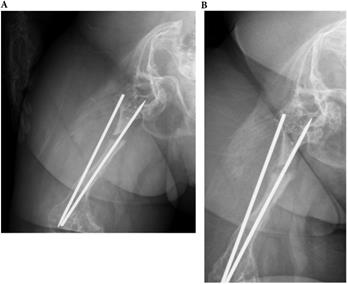 Data are presented as mean ± standard deviation or number of patients and percentages of group.

This is the first study describing the incidence and non-union rate of femoral fractures in adults with OI in Taiwan. Some smaller studies compared outcomes between different treatments in children with OI. Chiarello et al. compared the outcomes between surgical and conservative treatments of 29 children with long bone fragility fractures. They reported a slightly lower non-union and delayed-union rates under surgical treatment [21]. Enright and Noonan described femoral and tibial fractures with bone plating in four children with type 3 OI, which resulted in high complication rates [22]. Agarwal and Joseph and Gamble et al. found a 15%-20% prevalence on non-union fracture in a heterogeneous group of children with OI over a 10-14-year period [23-24]. However, the number of patients is small, and the results could not be extrapolated to adults, whereas it is 7.3 times higher non-union rate compared with adults with non-OI than in children with non-OI [25].

Although our study revealed new insights on the incidence of femoral fractures and non-union in adults with OI, it also has limitations in analyzing for non-union. There are many causative factors for non-union, including bisphosphonate use, DXA scans, smoking status, nutritional deficiency, vitamin D deficiency, mobilization status, metabolic disease, or endocrine pathology [26]. We were unable to adjust these confounders due to lost data of these factors. Furthermore, 34 patients (47.2%) received bisphosphonate treatment after the diagnosis of OI in our study and all patients with femur fractures using bisphosphonate. It might cause that non-union fractures turn to union fractures even if under conservative treatment. Additionally, in our patients with femur fractures (n=11), 9 patients had femoral implants (nail or plate) before the diagnosis of OI. This may influence the number of fractures in adult life. Moreover, we also needed more patients' data to strengthen the results due to the limited number of fractures.

Although this study has its limitations, we could state that adults with OI have a high tendency for non-unions with conservative treatment in femoral shaft fractures. We recommend surgical treatment for shaft fractures according to our data. We suggest intramedullary nailing in the surgical treatment for femoral shaft fractures despite the fact that our study results in no definite consensus. Intramedullary nailing is the standard treatment for femoral shaft fracture in adults with non-OI. Its advantages include optimal mechanical stability, efficient load transfer, minimization of stress concentration, early mobilization of hip and knee, preservation of soft tissues, fracture hematoma, and periosteal blood supply [17, 27-29]. Karadimas et al. reviewed the complications of intramedullary nails in non-OI femoral fracture. They reported a non-union rate of 1%-14.1% [30]. Excluding the study by Noumi et al., which only included open fractures, the non-union rates decreased to 1%-7.6% [31-32]. We could use a smaller nail in cases with anatomical abnormalities. It is also practical to use a humeral nail in cases of narrow intramedullary canal with a wedge osteotomy, if necessary. Patients' care should be personalized based on their characteristics, type of fracture, anatomical situation, and pre-existent materials. Caring for these patients with centralization and multidisciplinary work-up is needed (orthopedic surgeon, anesthetist, rehabilitation specialist, physiotherapist, occupational therapist, internist, geneticist, and radiologist).