Introduction: In recent years, there has been an increasing number of people who feel sleep-deprived owing to sudden changes in the social environment. Patients prescribed benzodiazepine-based hypnotics (BZ drugs) also develop movement disorder action and memory disorders as adverse events (AEs), and they have further problems such as dependency and tolerance because of long-term use. Therefore, the use of non-benzodiazepine-based hypnotics (Z-drugs) is recommended for patients with insomnia. However, as AEs have also been reported for Z-drugs, it is important to identify these when switching hypnotics.

Methods: To understand AEs to be noted when switching from BZ drugs to Z-drugs, we evaluated the differences in AEs developed by both these drugs using volcano plots and safety signals. For this, data registered in the Japanese Adverse Drug Event Report database were used.

Conclusion: AEs related to falls and bone fractures are expected to be more strongly onset in BZ drugs than in Z-drugs, which are said to have less muscle relaxant action. However, there was no particularly significant difference in this parameter between the two drug classes. Understanding the difference between these AEs of Z-drugs and BZ drugs is important for the proper use of hypnotics.

In recent years, the number of people who experience sleep deprivation owing to a sudden change in the social environment is increasing, and 4% to 6% of Japanese adults routinely use hypnotics [1]. In particular, the number of benzodiazepine-based hypnotics (BZ drugs) used in Japan is higher than that used overseas.

BZ drugs act on benzodiazepine receptors in the brain and exert hypnotic action by enhancing the activity of the γ-aminobutyric acid (GABA) system, which has an inhibitory potential on the central nervous system. BZ drugs are less likely to cause fatal damage owing to the suppression of the respiratory center compared with barbiturates, which act on the same GABA receptor and are widely used in clinical practice [2]. The use of BZ drugs also leads to adverse events (AEs) such as movement disorders and memory disorders; furthermore, their long-term use is associated with problems such as dependency and tolerance. Therefore, the “Clinical Guidelines for Proper Use of Hypnotics and Drug Withdrawal” of The Japanese Society of Sleep Research state that the quality of evidence is “moderate” and the recommendation is “weak.” It recommends the use of non-benzodiazepine-based hypnotics (Z-drugs) for patients who experience sleeplessness [2]. However, as AEs have also been reported for Z-drugs, it is important to identify these when switching hypnotic drugs.

Safety signals based on the principle of disproportionality in the difference between the ratio of AEs reported is used as an index of detection. Safety signals can detect unknown AEs at an early stage, and numerous risk assessments based on this have been reported [3-5]. There are several algorithms for signal detection [6-11]. Furthermore, in recent years, the use of various data mining methods has been proposed [12-15]. Among them, a method of visualizing the relationship between the OR and the statistically significant difference between the AEs of each group when comparing reported AEs among groups is often used [12, 13]. Known as the volcano plot [16], it is often used in the field of bioinformatics to visually understand the tendency of gene expression, and in recent years, it has also been utilized in the field of pharmacovigilance because it can easily evaluate the tendency of AE occurrence [12, 13]. Therefore, we evaluated the differences in AEs associated with BZ drugs and Z-drugs using the volcano plot and safety signals with the data from the Japanese Adverse Drug Event Report (JADER) database.

We created a dataset based on JADER database published in May 2020. The Japanese authority the Pharmaceuticals and Medical Devices Agency that owns these data does not permit its direct sharing. Therefore, we cannot make this data available and it can be accessed directly from the website: http://www.info.pmda.go.jp/fukusayoudb/CsvDownload.jsp (in Japanese only).

JADER is divided into four files and published, but they were combined based on the identification code into one dataset. This study excludes cases with age or gender deficiencies. The dataset for analysis contained 565,454 cases.

Definitions of suspected drugs and AEs

Suspected drugs were defined as BZ and Z-drugs. However, as Z-drugs are manufactured only as short-acting type of drugs, in this study, only ultra-short acting and short-acting BZ drugs were analyzed.

AEs to be investigated were defined as all AEs caused by BZ drugs and Z-drugs registered in JADER database. An AE is registered in the JADER database as the preferred term of the Medical Dictionary for Regulatory Activities/Japanese version (MedDRA/J); version 23.0. In this study, the target AE was defined as the high-level term (HLT). 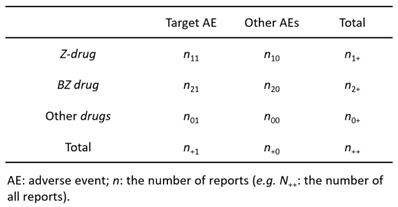 According to previous reports [12,13], we created a 3 × 2 table based on the presence or absence of Z-drugs, BZ drugs, and the target AE of each hypnotic (Figure 1). We calculated the OR and performed the Fisher's exact test. A volcano plot was prepared using the natural logarithm of OR (Eq. 1) as the abscissa and the common logarithm of p-value reciprocal obtained using the Fisher's exact test as the ordinate, showing the relevance of each hypnotic and AE.

However, OR cannot be determined, if a 0 cell exists in n11, n10, n21, and n20, and if the frequency is low, the estimation becomes unstable. Therefore, we corrected this bias by adding 0.5 to all cells (the Haldane-Anscombe 1/2 correction).

The proportional reporting ratio (PRR) [6] is a detection index used by the Medicines and Healthcare Products Regulatory Agency and the European Medicines Agency.

The following replacements were made to calculate the PRR and χ2.

In this study, to comprehensively compare the trends of AEs between Z-drugs and BZ drugs, volcano plots were created and the OR for each AE and statistically significant differences were compared (Figure 2).

The “Clinical Guidelines for Proper Use of Hypnotics and Drug Withdrawal” of The Japanese Society of Sleep Research recommend the use of Z-drugs and not BZ drugs for sleep disorders [2]. However, AEs have also been reported for Z-drugs, and these require attention. Therefore, for the purpose of identifying AEs to be noted when switching from BZ drugs to Z-drugs, a comparison between the AEs associated with both these drugs was conducted using volcano plots.

The results of volcano plots demonstrated that 12 AEs (HLTs) associated with Z-drugs showed a significant difference. Of these, six AEs (HLTs) were detected by PRR: Suicidal and self-injurious behaviour, Deliria, Parasomnias, Cortical dysfunction NEC, Psychiatric symptoms NEC, and Overdoses NEC; most of these were AEs related to the psychoneurotic system.

We noted that 20 AEs (HLTs) tended to occur with the onset of BZ drugs. Of these, five AEs (HLTs) were detected via PRR: Non-mechanical ileus, Ocular signs and symptoms NEC, Decreased physical activity levels, Myopathies, and Elevated triglycerides. Most of these were AEs related to physical symptoms.

Of the five AEs (HLTs) that tended to occur with the use of BZ drugs and for which the safety signal was detected, Ocular signs and symptoms NEC (Z-drugs PRR: 4.13 vs. BZ drugs PRR: 16.13) also occurred with the use of Z-drugs (with signal detection). The remaining four AEs (HLTs) were detected only for BZ drugs.

Thus, using volcano plots, the difference in the tendency of AE onset between the two drugs was clarified. This study revealed six AEs that should be noted when switching from BZ drugs to Z-drugs. Most of these were AEs related to the psychoneurotic system, which may be the caused because of the effect of Z-drugs on the brain. 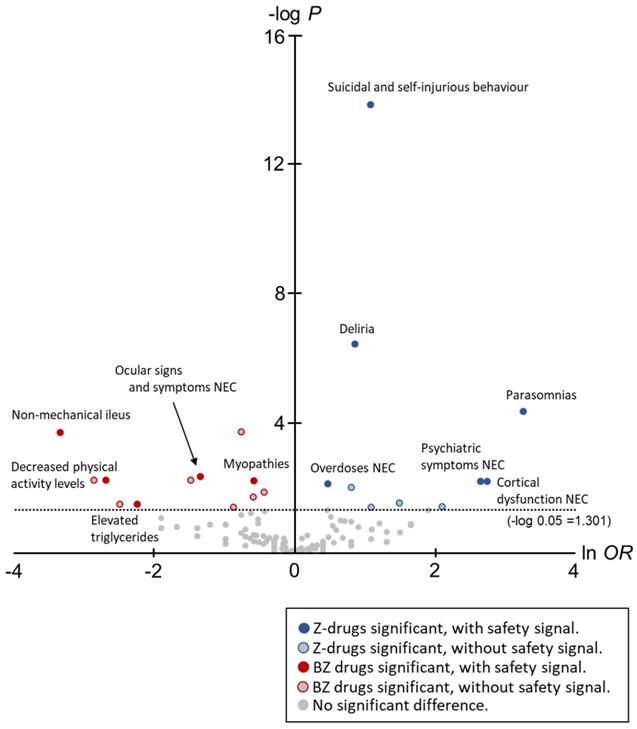 Adverse events with significantly different onset, and their signal scores.

The mechanisms by which Z-drugs cause complex sleep behaviors (e.g., parasomnia) are not completely understood. Z-drugs selectively bind to the GABA alpha-1 subunit, which results in hypnotic effects without the anticonvulsant and myorelaxant effects associated with BZ drugs [18]. The maintenance of slow-wave sleep may increase the likelihood of parasomnia induced by Z-drugs, especially compared with that induced by BZ drugs, owing to their less muscle-relaxing effect. In contrast to Z-drugs, BZ drugs reduce slow-wave sleep [19]. These theories are also supported by the results of this study. Therefore, when switching from BZ drugs to Z-drugs, it is necessary to pay close attention to parasomnia.

Although differences in reporting ratios are often used to detect the safety signals of AEs as a disproportionality analysis, the detected safety signals are known to be subject to reporting bias (e.g., Weber effect [26], notoriety effect [27], and ripple effect [27]). Naturally, these reporting biases are also unavoidable in the volcano plot analysis, as these biases are attributable to the case series when the database (JADER) was created.

In this study, to understand the AEs that should be noted when switching from BZ drugs to Z-drugs, the differences between the AEs that onset with BZ drugs and Z-drugs were evaluated using volcano plots and safety signals using JADER. The volcano plot revealed 12 characteristic Z-drug-induced AEs. Of these, there were six AEs for which signals were detected. Parasomnias, Cortical dysfunction NEC, and Psychiatric symptoms NEC were detected only in Z-drugs, safety signals of Suicidal and self-injurious behaviour, Deliria, and Overdoses NEC were also detected in BZ drugs, but the safety signal strength was much higher with the Z-drug. Therefore, attention should be paid to the onset of these AEs when switching from BZ drugs to Z-drugs. Understanding the difference between these Z-drug- and BZ drug-related AEs is important for the proper use of hypnotics.

This study was supported by JSPS KAKENHI Grant Number 19K20731.

2. Okumura Y, Psychotropic medicine use that may be inappropriate from clinical epidemiological research:4 points to keep in mind. Monthly IHEP, 2016; 249: 21-9