Bacteria response to their environment by producing some compounds which are used in cosmetic and pharmaceutical applications. Some probiotics can regulate immune response and modulate the symptoms of several diseases. Bacteria affect skin response to skin care products. Bacteria are thought to play an important role in acne incidence, skin moisture, and nutrient metabolism, but only a few studies have focused on the extracts of Lactobacillus plantarum in skin care. In this study, we identified that L. plantarum-GMNL6 enhanced collagen synthesis and the gene expression of serine palmitoyltransferase small subunit A. Meanwhile, L. plantarum-GMNL6 reduced the melanin synthesis, the biofilm of Staphylococcus aureus, and the proliferation of Cutibacterium acnes. Information from clinical observation during the ointment for external face use in people displayed that the syndromes of skin moisture, skin color, spots, wrinkles, UV spots, and porphyrins were improved. The diversification of human skin microbiomes was affected by smearing the face of volunteers with L. plantarum-GMNL6. Understanding the potential mechanisms of the action of L. plantarum-GMNL6 in dermatologic conditions promotes the development of care products.

Some products of bacteria with anti-oxidative activity have been show to play an important role in skin care. Bacteria can produce some compounds in response to environmental stress. These compounds of bacteria are generally used in medicine, cosmetics, even in sports [1]. Some probiotics have immunomodulatory activities and modulate the symptoms of several diseases [2]. Previously, the extracts of Rhodobacter sphaeroides inhibited inducible nitric-oxide synthase expression in activated macrophages, and reduced inflammation in colitis model [3]. The probiotics are complementary and alternative medicines and is used for promoting health [4]. Some specific probiotic strains, including Bifidobacterium, Saccharomyces, Enterococcus, Bacillus, and Lactobacillus, have been demonstrated for health benefits [5]. Recently, Lactobacillus had been reported to ameliorate symptoms of diabetes in human studies [6]. Lactobacillus also reduced neuropsychiatric disorders, regulated blood pressure, provided physiological benefits, and exerted anti-inflammatory effects [7]. The pigmentary disorders and melanoma are abnormal melanogenesis is a feature of many human skin diseases. The wrinkles, melasma and age spots are often observed in skin lighterers in European. In Asia, the care products are used to make skin whiter and moisture [3]. Some probiotics is able to serve as a potential care products. Probiotics such as lactobacillus have been demonstrated to modulator skin symptoms [8]. L. plantarum is effective for alleviating atopic dermatitis symptoms in adults owing to its immunomodulatory effects [9]. L. plantarum against UVB-induced photoaging in human dermal fibroblasts and hairless mice [10]. Meanwhile, L. plantarum possesses various pharmacological properties, such as anti-cancer and anti-colitis [11].

We focused on the screening of skin care function from various probiotics for enhancing collagen synthesis and the gene expression of serine palmitoyltransferase small subunit A (SPTSSA). In this study, we sought to investigate that L. plantarum-GMNL6 play a role in maintenance skin and wanted to develop L. plantarum-GMNL6 as skin care products for the management of skin conditions.

HS68 cells were seeded to 6 well plate (2×105 cells/well), and treated with various heat-killing bacteria (5×108 cells/ml) after 24 h. The cell extracts were collected, RNA was extracted and converted into cDNA, and the serine palmitoyltransferase small subunit A (SPTSSA) and the β-actin were quantified by real-time-PCR analysis.

L. plantarum-GMNL6 was incubated overnight at 37℃. The cells were disrupted using an ultrasonic disruptor (ultrasonic instrument model W-220F) and then centrifuged. After centrifugation, the bacteria were reconstituted with a mixture of chloroform-methanol-water (1:1:0.9), and the aqueous phase containing LTA was collected. The solution was then injected onto Octyl-Sepharose CL-4B column (Sigma) and Q-Sepharose column. The LTA was purified, and stored at -20℃.

The lactic acid bacteria were collected by centrifugation. After washing three times with PBS, 50 g of lactic acid bacteria (wet weight) was broken by an ultrasonic breaker to prepare a crude extract. After centrifugation at 8,000 rpm for 30 minutes, the supernatant was collected and then washed three times with PBS, and centrifuged (8,000 rpm, 30 minutes, 4 ° C), and this procedure was repeated three times. Finally, the precipitates were reacted with 100 mg / ml RNase and 50 mg/ml DNase for 18 h, and then 200 mg/ml trypsin was added, and then reacted at 37℃for 18 h. The precipitates were treated with 5% trichloroacetic acid (TCA). The TCA extract was dried to prepare a peptidoglycan powder.

The B16F10 cells were harvested and washed twice with PBS. The pelleted cells were lysed in cold lysis buffer (20 mM sodium phosphate pH 6.8, 1% Triton X-100, 1 mM PMSF, and 1 mM EDTA). After centrifugation at 15 000 g for 15 min, the melanin pellets were dissolved in Soluene-350 (Perkin-Elmer, Waltham, MA, USA) for 15 min at 100 ℃. The absorbance at 400 nm was measured [12]. The protein content in each sample was determined by bicinchoninic acid (BCA) protein assay (Pierce Biotechnology, Rockford, IL, USA).

S. aureus was incubated overnight at 37℃. The different concentrations of LTA were treated in to 96 well that had been incubated S. aureus (2 ×107 cfu/ well) for 24 hours. The supernatant was removed and washed twice with PBS. The biofilm was fixed with ethanol for 15 min and stained with 0.1% crystal violet. Then, crystal violets were dissolved in acetic acid. The absorbance at 590 nm was measured.

All data were expressed as mean ± standard deviation (SD). The unpaired, two-tailed Student's t test was used to determine differences between groups. Any P value less than 0.05 is regarded statistically significant.

In order to find out the optimal probiotics, the various potentially probiotics were treated with HS68 cells by using collagen synthesis and the gene expression of serine palmitoyltransferase small subunit A (SPTSSA) assays. As shown in Figure 1A, the collagen synthesis was significantly increased after E. faecium and L. plantarum-GMNL6 treatment. The collagen and ceramide are involved in skin rejuvenation. Ceramide is a lipid that exists in the intercellular space of skin cells. The sphingosine and fatty acid constitute ceramide which is the most important and highest proportion of lipids of the skin, with a total content of about 40-50% of the intercellular lipids. Ceramide distributed in the intercellular space and closely maintains the lipid integrity to form a natural waterproof membrane. Ceramide prevents the evaporation of water, allows the keratinocytes to lock in moisture. Serine palmitoyltransferase is the rate-limiting step in ceramide biosynthesis. L. plantarum-GMNL6 had the best ability to stimulate the gene expression of SPTSSA compared with other probiotics (Fig. 1B). Dependent on the two assays, L. plantarum-GMNL6 was selected in the subsequent analyses.

The potential components of L. plantarum-GMNL6 involved the beneficial effects on skin care

Effects of various probiotic on skin health. HS68 cells were treated with various probiotics (5× 108 cells/ml) after 24 h. (A) The supernatant was collected and then analyzed collagens. (B) The cell extracts were collected, RNA was extracted and converted into cDNA, and the serine palmitoyltransferase small subunit A (SPTSSA) and the β-actin were quantified by real-time-PCR analysis. 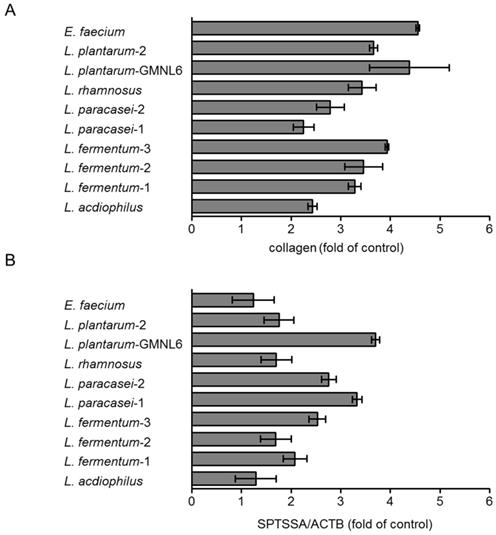 The collagen synthesis, the gene expression of SPTSSA, melanogenesis, and biofilm formation were measured after lipoteichoic acid (LTA) and peptidoglycan (PGN) of L. plantarum-GMNL6 treatment. Effect of LTA and PGN on (A) cellular collage synthesis and (B) the gene expression of SPTSSA. (C) Effect of lipoteichoic acid (LTA) and peptidoglycan (PGN) on cellular melanin content. (D)The inhibition of biofilm formation of S. aureus was measured after LTA and PGN treatment. (n = 6, data are mean± SD. * P < 0.05, # P < 0.01). 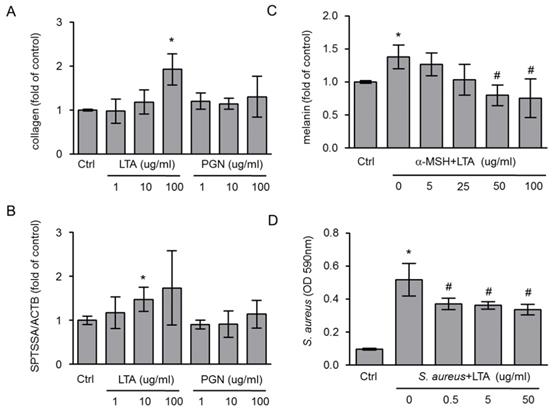 Recruitment of participants and the study design. The cream containing probiotics or not was performed a total of 2 months. All participates were requested to collect data by using Corneometer® CM 825, Skicon 200 EX® Derma-Spectrometer, and VISIA®.

The effects of Lactobacillus plantarum-GMNL6 on human skin health. 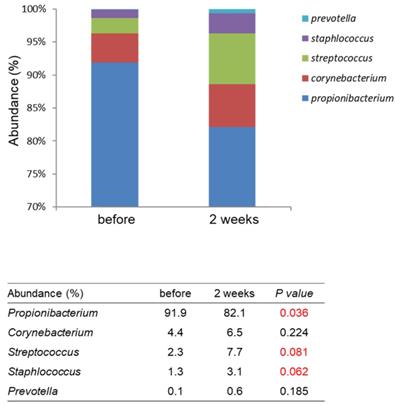 a: comparing with baseline in left face; P < 0.05 was considered statistically significant.

b: comparing with baseline in right face; P < 0.05 was considered statistically significant.

The effects of Lactobacillus plantarum-GMNL6 on human skin health.

a: comparing with baseline in right face; P < 0.05 was considered statistically significant.

Probiotics are considered important roles in skin health, wellbeing, and microbiome-associated skin disease. Therefore, we explored the possibility that probiotics associated with skin health. Supplementation of the L. plantarum-GMNL6 to cell improved the collagen synthesis and moisturizing. Although probiotic cell wall components have been demonstrated to be related to probiotic function [15], very few evidences proposes that they contribute for skin care. In the present study, the LTA of L. plantarum-GMNL6 was involved in improvement of skin condition, including collagen synthesis, moisturizing, melanogenesis, and anti-biofilm formation. In human studies, some people have been facing a lot of ordeals at skin condition. After two months L. plantarum-GMNL6 treatment, we observed that some skin conditions had been improved in human.

Unlike LTA from other Gram-positive bacteria, LTA from L. plantarum-GMNL6 acts as cosmetic regulator substance. In accordance with previous observations, the LTA of Lactobacillus has multi-functions, including anti-inflammatory, improvement of diarrhea, and blood glucose control [7]. Previously, we found that an extract of R. sphaeroides inhibited proinflammatory cytokines and enhanced mucosal immune balance in a dextran sodium sulfate (DSS)-induced colitis model [3, 16]. We also demonstrated the extract of R. sphaeroides as an anti-melanogenic agent with the capacity to ameliorate α-MSH induced-hyperpigmentation [17].

This work was supported by Higher Education Sprout Project, Taiwan.