Recurrence is a major problem for prostate cancer patients, thus, identifying prognosis-related markers to evaluate clinical outcomes is essential. Here, we established a fifteen-miRNA-based recurrence-free survival (RFS) predicting signature based on the miRNA expression profile extracted from The Cancer Genome Atlas (TCGA) database by the LASSO Cox regression analysis. The median risk score generated by the signature in both the TCGA training and the external Memorial Sloan-Kettering Cancer Center (MSKCC) validation cohorts was employed and the patients were subclassified into low- and high-risk subgroups. The Kaplan-Meier plot and log-rank analyses showed significant survival differences between low- and high-risk subgroups of patients (TCGA, log-rank P < 0.001 & MSKCC, log-rank P = 0.045). In addition, the receiver operating characteristic curves of both the training and external validation cohorts indicated the good performance of our model. After predicting the downstream genes of these miRNAs, the miRNA-mRNA network was visualized by Cytoscape software. In addition, pathway analyses found that the differences between two groups were mainly enriched on tumor progression and drug resistance-related pathways. Multivariate analyses revealed that the miRNA signature is an independent indicator of RFS prognosis for prostate cancer patients with or without clinicopathological features. In summary, our novel fifteen-miRNA-based prediction signature is a reliable method to evaluate the prognosis of prostate cancer patients.

Prostate cancer (PCa) causes a heavy health burden for men around the world, accounting for more than 350,000 cancer-specific deaths, and it was the fifth leading cause of cancer in 2018 [1]. Approximately 5% of PCa patients have advanced type PCa or metastases at the time of diagnosis [2]. For advanced PCa, initial hormonal therapy can inhibit the progression of PCa in most patients by decreasing the function of the testosterone and androgen receptor (AR) signaling pathway; however, these patients tend to develop castration-resistant prostate cancer (CRPC), and approximately 10-20% of these patients arrive at this stage in the first five years after diagnosis [3, 4]. For patients over 75-years-old, the incidence rate of metastasis increases to 48% at the time of diagnosis, and PCa-specific death is also as high as 53% [5].

A class of non-coding RNAs that are 17-25 bp in length that could impact protein-encoded genes through binding to the 3' untranslated region of mRNA are named as microRNAs (miRNAs). Approximately half of the mRNAs' expression could be modified with miRNAs through this mechanism [6-11]. Numerous articles have reported that miRNAs could participate in the process of normal cell physiology, including cell differentiation, apoptosis, proliferation, and cell cycle arrest [12-14]. In addition, miRNAs are also involved in the extensive process of tumorigenesis in various cancers, such as pancreatic cancer, brain glioma, cervical cancer and prostate cancer [15-20]. With the application of gene sequencing in tumors, miRNAs have been considered novel biomarkers in the prediction of prognosis and drug resistance [21-25], and integrating multiple miRNAs could be more effective and lead to a better prediction than single miRNAs [16, 23, 26-29].

In the current study, our purpose was to establish a multiple-miRNA-based signature to predict the recurrence risk of PCa patients, to help the clinician develop treatment plan.

The miRNA profile and clinical information of PCa patients from TCGA database was download through UCSC Xena HUGO probeMap (https://xenabrowser.net/datapages/). The expression level of miRNA is described as log2 (RPM+1). A total of 491 patients with recurrence-free survival (RFS) information were selected. The MSKCC cohort, also known as GSE21032, was downloaded from the Cbioportal (http://cbio.mskcc.org/), which included miRNA profile (normalized log2 miRNA expression data), and matched clinicopathological features of 105 PCa patients. MSKCC cohort was prepared as the external validation dataset.

Establishment of the Prognosticate Signature

Kaplan-Meier curves were performed to compare the RFS outcome between the high- and low-risk patients determined by the miRNA-based signature. The ROC curve was plotted with the R package “pROC”. The predictive value was assessed by the area under the ROC curve (AUC). In addition, nomogram ROC analysis was used to synthesize the miRNA-based signature with the clinicopathological features, as well as the laboratory test results. In addition, the Kaplan-Meier plot and log-rank analyses were used to determine the survival difference between high- and low-risk subgroups, and the univariate Cox analysis was used to generate the hazed ratio (HR) and 95% confidential interval (95% CI) among high- and low-risk subgroups.

miRNA target genes were predicted based on the R package “multiMiR”, which combines the predict results from miRecords, miRtarbase, and Tarbase databases [31-33]. Pathway enrichment analysis was performed using the R package “clusterProfiler”. The downstream genes, which were targeted by at least eight miRNAs were enrolled to establish the miRNA-mRNA interaction network, which was subsequently displayed by the Cytoscape software (San Diego, CA, USA) [34].

The miRNA expression profile derived from the TCGA dataset was set as the training cohort, while the external validation cohort was extracted from the MSKCC database. The detailed clinicopathological features of two cohorts were presented in Table 1. In addition, we also performed hierarchical grouping analyses for the TCGA cohort. According to a five-tiered risk features provided by the Cambridge Prognostic Group (CPG) classification for non-metastatic PCa patients, the patients were assigned to TCGA-group-1 and TCGA-group-2 subgroups [35] (Table 1).

Clinicopathological features of prostate cancer patients enrolled in each cohort

Validation in Subgroup of Patients Stratified by Hierarchical Grouping 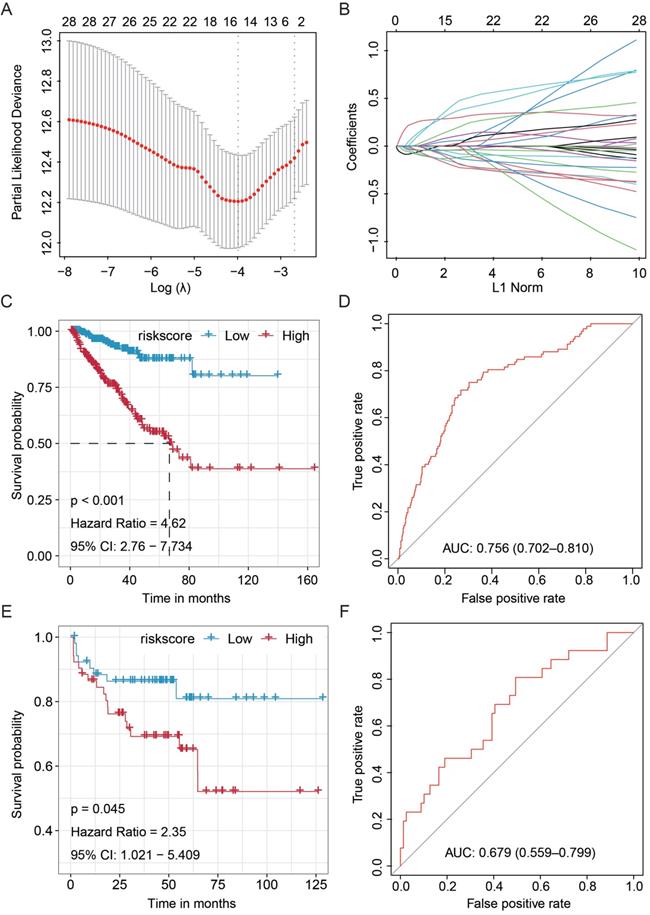 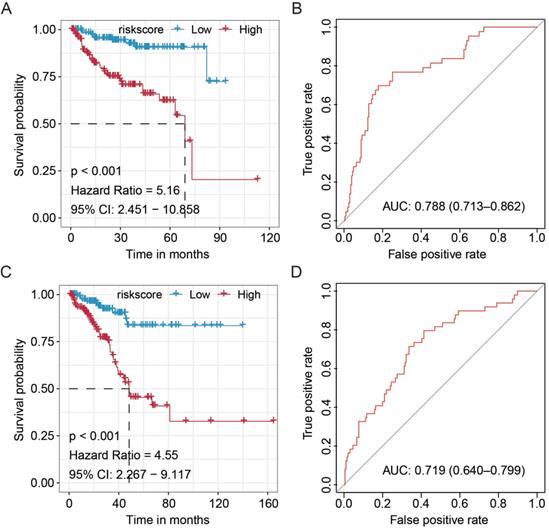 Regulatory network of the fifteen miRNA markers and their trustable target genes. MiRNAs were highlighted in red. We filtered out genes that were targeted by at least eight miRNAs to construct the miRNA-mRNA network. 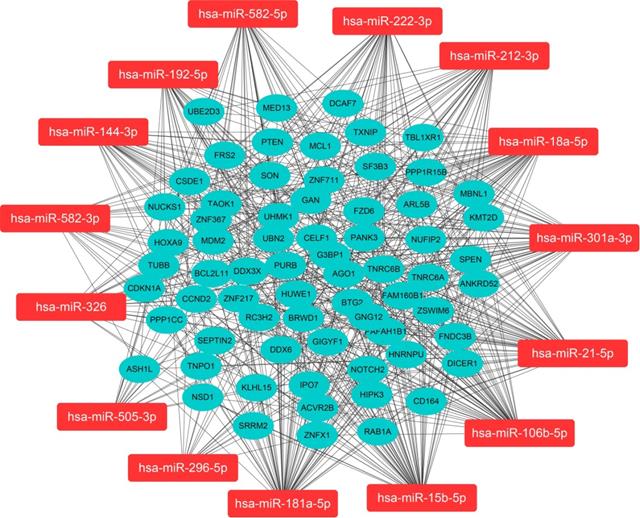 Functional enrichment for the targeted genes of the enrolled fifteen miRNAs. 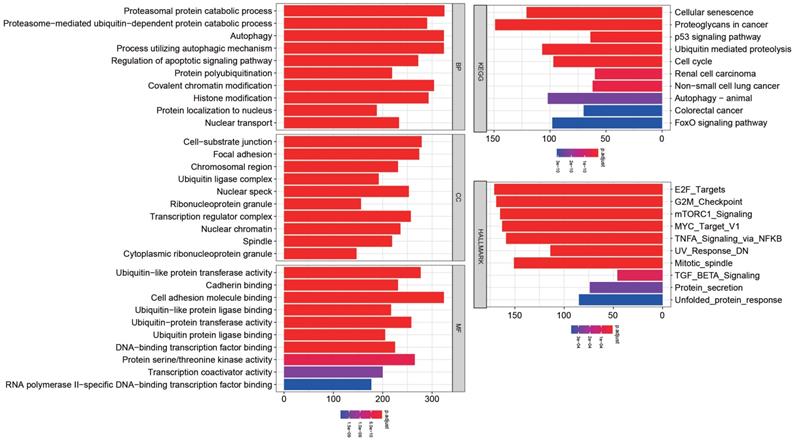 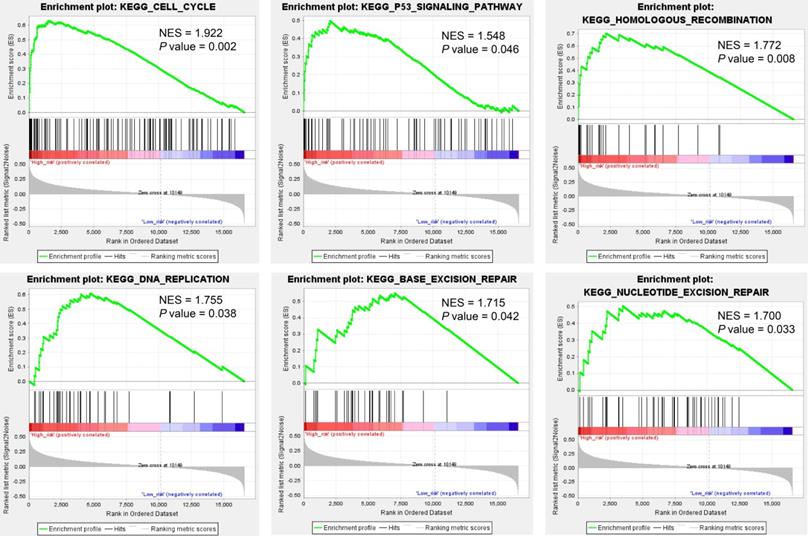 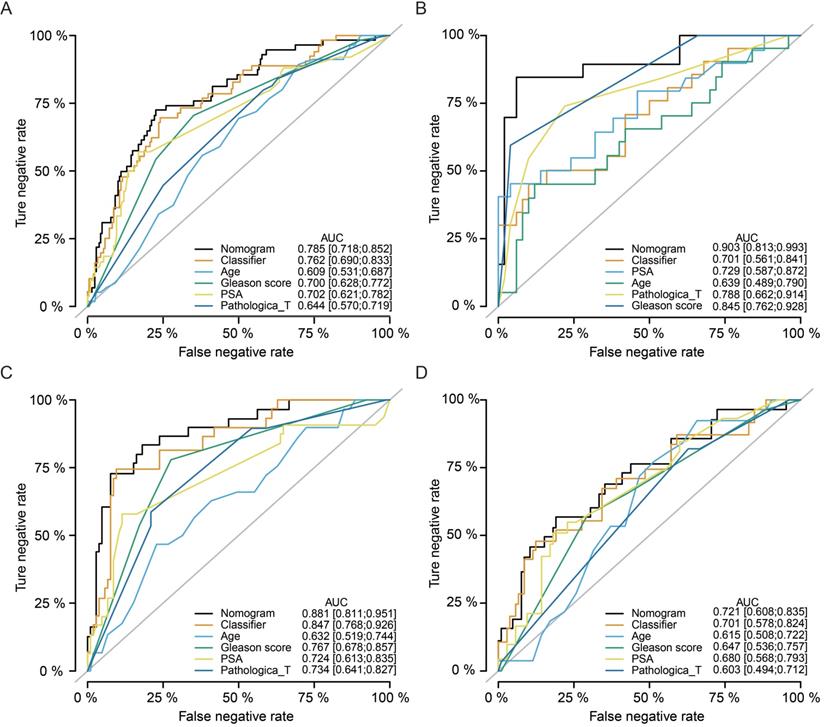 We further performed stratified survival analyses to evaluate the prognosticate values of our risk model in different subgroups. According to Fig. 7, in general, the miRNA signature could distinguish the recurrence risk for different age populations (≤ 60 or > 60) and Gleason score populations (≤ 7 or > 7). Although the novel miRNA signature could only indicate the recurrence risk in patients whose PSA was lower than 10 ng/ml (P < 0.001) subgroup, the tendency was satisfied in PSA > 10 ng/ml subgroup, and the failed statistical analyses were potentially due to limited sample size.

In the United States, PCa accounts for the majority in newly diagnosed cases and ranks as the third-leading cause of cancer-specific death [37]. At an early stage, most PCa patients could benefit from curative treatment and acquire a relatively good prognosis; however, advanced PCa patients tend to have poor prognoses due to recurrence or distant metastases [38]. Thus, the identification of biomarkers to predict the prognosis of PCa patients is warranted, which could clinically benefit the decision-making process. Nevertheless, few effective biomarkers that could be used for prognosis prediction are currently available. 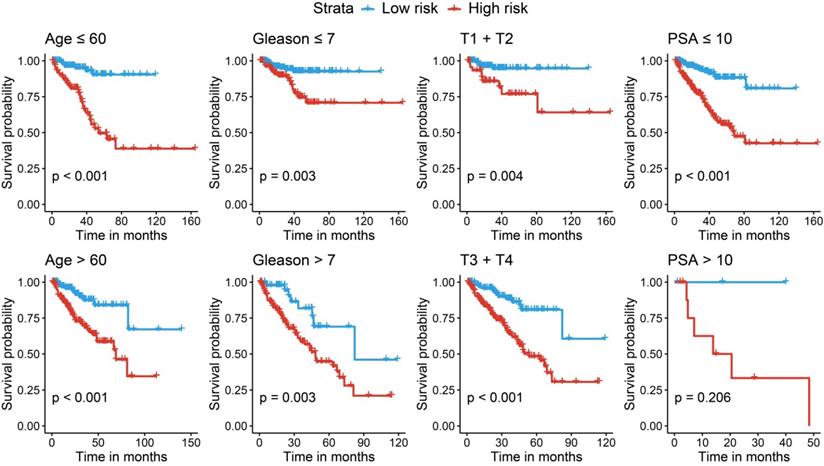 Multivariate Cox analysis among the risk score and clinical features

It is clear that miRNAs play pivotal roles among various cellular processes and are also involved in the initiation and progression of various cancers [39]. Here, we established and validated a stable fifteen-miRNA-based signature that could be used to predict the prognosis of PCa patients. The results showed that this classifier effectively assigns PCa patients into high- or low-risk groups, and found that the patients categorized in the high-risk group were more likely to have unfavorable RFS rate. These results were confirmed in the external MSKCC validation cohort. The multivariate analysis found the classifier was an independent risk factor for recurrence of PCa, and even better than Gleason score, PSA level, and pathological T grade. Nomogram analyses found that the classifier adds value to the currently available staging system. In addition, the targeted genes were predicted by three online databases, and the functions of these downstream genes were annotated by GSEA, KEGG, and GO analyses. All these results prove the clinical significance of the miRNA-based signature and predict the underlying mechanisms of how these miRNAs influence the tumor progression.

He et al. [40] found that the increased expression of hsa-miR-21-5p suppresses the proliferation and migration of colon cancer cells in vivo and in vitro, which means the overexpression of hsa-miR-21-5p may promote the prognosis of cancer patients. Elevated expression of hsa-miR-222-3p has been reported in diverse cancers, and it promotes the proliferation, invasion, metastasis, and immune escape of cancer cells [41]. Cheng et al. [42] found that hsa-miR-222-3p serves as an independent risk factor in the recurrence of prostate cancer. Fang et al. [43] found that high expression of hsa-miR-582-3p is associated with unfavorable prognosis of lung cancer patients, and it maintains the stem cell-like traits of lung cancer by activating Wnt/β-catenin signaling. Chen et al. [44] established a miRNA-based prognostic signature and the higher expression of hsa-miR-326 is linked to unfavorable overall survival among non-small cell lung cancer (NSCLC) patients. Zou et al. [45] demonstrated that suppressing miR-192-5p expression regulates lung cancer cell proliferation, migration, and invasion by negatively regulating TRIM44 expression. Similar results are obtained by Zheng et al. [46] that miRNA‑192 plays an oncogenic role in colon cancer, and simvastatin inhibits cancer cell growth by activating miR-192. Li et al. [47] found that downregulation of miR-181a-5p is observed in aggressive breast and colon cancers, and it inhibits the migration and angiogenesis via downregulation of MMP14; furthermore, the role of miR-181a-5p is consistent in prostate cancer study [48]. For miR-144-3p, researchers found that it promotes the growth and metastasis of papillary thyroid carcinoma by targeting the PAX8 gene [49]. While for other candidates, few studies report their expression and function in cancers, or their prognosis effects are not completely consistent with previous publications.

Highlighted, it is interesting to explore the differences between high- and low-risk PCa populations. GSEA analysis suggested that the differential expressed genes were mostly enriched in Cell Cycle, Oocyte Meiosis, Base Excision Repair, Homologous Recombination, DNA Replication, Spliceosome, Nucleotide Excision Repair, and P53 Signaling Pathways. Cancer is demonstrated as uncontrolled cell proliferation attributing to aberrant activities of various cell cycle-related proteins; thus, regulators of the cell cycle process are considered as therapeutic targets in cancers [50]. For example, PARP inhibitors are highly successful used in treating BRCA1/BRCA2-mutant tumors. DNA replication has been proved to play a critical role in tumor cell proliferation. Mutations in DNA replication genes could cause hereditary forms of colorectal, breast, ovary, and skin cancers [51-54]. P53 is regarding as an extraordinary multifunctional protein, which participates in the regulation of cell cycle, differentiation, immune response, DNA repair, etc. [55-59] In addition, the localization of p53 at active replication forks and the p53-dependent effects on DNA elongation indicates that the p53 protein involves in the DNA replication process [60, 61]. Combined these results, dysregulation of DNA replication and cell cycle processes were potential causes of tumor progression. For other significantly enriched pathways, many reports also indicated their significance in cancer progression. Our results present a novel genetic aspect of prostate cancer recurrence, which will benefit to the personalized treatment for these patients.

Overall, we establish a novel fifteen-miRNA-based RFS prediction signature for PCa patients, which can successfully classify PCa patients into low- and high-risk groups and predict their prognosis. The novel miRNA signature is a reliable tool to assess the prognosis of PCa patients. Currently, our center is ongoing to collect PCa tissues and serum samples and would validate these findings in the near future.

Z.B. and X.H. designed this experiment. Y.C., J.M., X.F. and M.Z. performed the research and analyzed the data. Z.B., M.Z. and J.M. wrote the manuscript, and then L.Z., J.Z. and C.L. revised the manuscript. All authors read and approved the final manuscript.

55. Uehara I, Tanaka N. Role of p53 in the Regulation of the Inflammatory Tumor Microenvironment and Tumor Suppression. Cancers. 2018 10(7)