Background: X-inactive specific transcript (Xist) is a lncRNA, which plays a significant role in X-chromosome inactivation, regulates cell proliferation in tumor cells, and inhibits apoptosis in acute myocardial infarction. On the other hand, miR-7a-5p is involved in cardiomyocytes injury in myocardial ischemia/reperfusion. However, their roles in LPS-induced damage remain unclear.

Objectives: This study aimed at using siRNA transfection and lentivirus infection to regulate the expression of xist and miR-7a-5p, and to evaluate their effects on LPS-induced myocardial damage.

Method: Mice cardiomyocytes (MCM) cells were divided into six groups, namely the control group, the LPS group, the LPS + lncRNA- group, the LPS + lncRNA+ group, the LPS + miRNA- group, and the LPS + miRNA+ group. Quantitative real-time PCR (qRT-PCR) was performed to assay for the RNA expressions of xist, miR-7a-5p, peroxisome proliferator-activated receptor-γ coactivator-1α (PGC-1α), and recombinant mitochondrial transcription factor A (Tfam) in all the groups. The ATP level was determined using the adenosine triphosphate (ATP) assay kit according to the manufacturer's instructions. Flow cytometry was performed to estimate the level of apoptosis and proliferation in cells in each group.

Conclusions: In this study, we established that down-regulation of xist and mir-7a-5p reduces apoptosis in response to LPS.

Sepsis has been recognized as a leading cause of human diseases and death among critically ill patients [1]. Severe-sepsis-associated mortality rates range from 34% to 56% [2]. Myocardial dysfunction is common in severe sepsis, and microcirculatory and mitochondrial dysfunctions play an essential role in the development of severe sepsis [3,4]. Currently, the pathogenesis of sepsis-induced myocardial damage remains unclear, and thus its treatment remains a challenge. Findings from previous studies indicate that various inflammatory and non-coding RNA are involved in sepsis-induced myocardial damage through modulation, and the latter has received increased research attention in recent years [6,7].

Long noncoding RNAs (lncRNAs) are a class of RNA that are longer than 200 nucleotides, and with no protein-coding potential [8]. They modulate gene expression at different levels, including chromosome reconstruction, transcription, and post-transcription [9]. LncRNAs play various critical biological functions such as acting as signaling, decoy, guide, and scaffold molecules [10]. For instance, they participate in the modulation of the occurrence and development of various cardiovascular diseases [11]. LncRNA NEAT1 relieves sepsis-induced myocardial injury by modulation the TLR2/NF-κB signaling cascade [12]. In rat models with acute myocardial infarction, the knockdown of xist represses myocardial cell apoptosis by modulating miR-449 [13]. Xist is a 17-kb lncRNA that regulates X chromosome inactivation in mammals resulting in equivalence in gene dosage between the XX female and the XY male [14]. In recent studies, xist has been shown to target corresponding miRNAs and regulate the pathological process of various diseases. Xist protects cardiomyocyte hypertrophy by targeting miR-330-3p and modulates myocardial infarction by targeting miR-130a-3p†[15]. However, the mechanism of xist in sepsis -induced myocardial damage remains unclear.

Transfection was performed using the Nanofusion version 2.0 Transfection kit (Biomedicine, China), according to the manufacturer's instructions. Xist and mir-7a-5p inhibitors or mir-7a-5p mimic were transected at a final concentration of 60 uM for 6 hours, and the old media replaced with complete media. Cell transfection lasted for 48 hours.

The old medium was replaced with fresh medium containing 6 µg/ml polybrene, then added the virus suspension, and incubated at 37ºC for 4 hours. About, 2 ml fresh medium was added to dilute polybrene and the cells used for further experiments, within 48 h after transfection. The LPS + lnc RNA + group was established using the lentivirus infection.

Determination of cell apoptosis and proliferation

Cell apoptosis and proliferation were assessed using flow cytometry (FCM) (BD Biosciences, United States). The MCM cells were collected after transfection for 48 hours and washed twice using PBS. The cells were harvested using trypsin without EDTA and collected after centrifugation at 2000rpm for 3 minutes. Subsequently, the cells were washed using ice-cold PBS, the cells collected, and added into the apoptosis analysis solution. Apoptotic cells were labeled using Annexin V-FITC and propidium iodide (PI) (E-CK-A217, Elabscience) following the manufacturer's instructions. Similarly, flow cytometry was used to estimate cellular proliferation. The cells in different groups were incubated at a final concentration of 10 µM BrdU for 1 hour. The cells were harvested and re-suspended at a density of 2×107 cells/ml. The cells were fixed and permeabilized, the medium removed, the medium and BrdU incorporated. The newly synthesized DNA was quantified by flow cytometry (grouped as follows: Control, LPS, LPS+ lncRNA-, LPS+ lncRNA+ / Control, LPS, LPS+ miRNA-, LPS+ miRNA+).

Sample preparation: The medium was removed, and a total of 200 µl of lysate was added to a six-well plate. After lysis, the cells were centrifuged at 12,000 rpm for 5 min at 4°C. To prepare a standard curve, the ATP standard solution was used. Specific concentrations used were 0, 0.1, 0.3, 1, 3 and 10 μM. (See Supplementary Materials1.). The working solution for ATP testing was prepared by taking an appropriate amount of ATP detection reagent and dilute with the ATP detection reagent diluent at a ratio of 1:9 and the procedure was carried out on the ice. To determine the ATP concentration, 100 μL of ATP detection working solution was added to the well and incubated at room temperature for 3-5 min, so that all the background ATP was consumed. About 20 μL of the sample or standard was added to the test well, quickly mixed using a gun, and at least 2 seconds apart, a luminometer was used to measure the RLU value.

Total RNA was isolated from the cells using the TRIzol reagent according to the manufacturer's instructions. MRNA expression was evaluated by quantitative real‐time PCR using SYBR Green (ABI, USA). The mRNA expression levels of xist, mir-7a-5p, PGC-1α, and Tfam were quantified. The primer sequences of these genes are shown in Table 1. The PCR conditions were set as follows; 95ºC for 30s, 95ºC for 5s, and 60ºC for 30-34s, a total of 40 cycles. All the samples were analyzed in triplicates. The relative expression levels of the genes were calculated using the 2-ΔΔCt method.

Proteins were extracted from the protein lysate, and their concentrations determined using the BCA kit (Takara, Japan). The protein samples were mixed with the buffer in a 4:1 ratio, the protein concentration kept constant at 3.2 μg/μl, and Western blotting performed. Protein samples (64 μg) were separated using a 4-20% gradient SDS-PAGE gel. The samples were incubated overnight at 4ºC (rabbit anti-rat, PGC-1a, Tfam concentration were 1:1000-2000, 18-24 hours). The next day, the samples were incubated with the secondary antibody (1:1000) for 1 hour. The reaction time was 1 minute and the chemiluminescence detection reagent (reagent A: reagent B = 1:1) was used.

Data were analyzed using the Statistical Product for Social Sciences (SPSS; version 20.0). The data were presented as mean ± standard deviation (SD). For the ATP level and q-PCR assays, the results were analyzed using a one-way analysis of variance. P-value <0.05 was considered statistically significant.

Establishment of the sepsis cell model

The morphology of the myocardial cells cultured was evaluated under an ordinary optical microscope (100×). (See Supplementary Materials 2 for details). 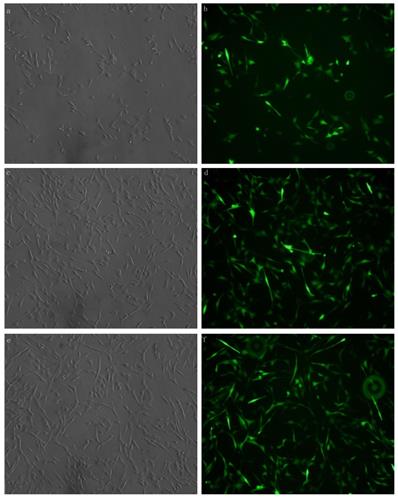 Effects of xist and mir-7a-5p on the myocardial cells

The correlation between non-coding RNA and PGC-1α 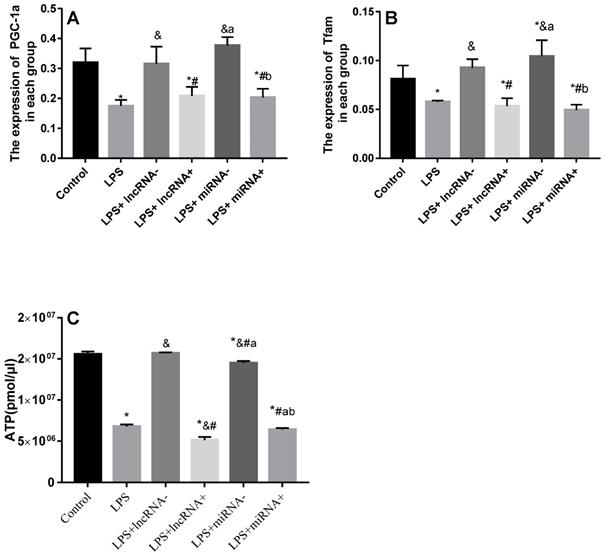 Xist plays an essential role in the proliferation, migration, apoptosis, and differentiation of various human cells [26]. Findings from a recent study posit that xist in myocardial cells is up-regulated after myocardial infarction, and knockdown of xist protects against cell death induced by myocardial infarction [15]. Moreover, xist is significantly up-regulated after spinal cord injury [27]. PGC-1 α is a transcription coactivator, which interacts with many transcription factors involved in energy metabolism [28]. Numerous types of miRNAs regulate mitochondrial function in various ways; for instance, Microrna-130b regulates mitochondrial biosynthesis via the PGC-1 α/Tfam axis [28]. However, no studies have been conducted exploring the relationship between xist and the PGC-1 α pathway. In this study, increased xist expression was found to be associated with reduced PGC-1α and Tfam expression, and decreased ATP levels. This implies that repressing the expression of xist improves the expression of ATP, and provides insights for the treatment of sepsis. However, there are still some limitations to this study. Presently, the underlying mechanism between xist and PGC-1α remains unclear. The differences in ATP content may be driven by differences in cellular apoptosis. Therefore, further studies are needed to provide a better understanding of the relationship between xist and PGC-1 α pathway.

Reciprocal regulation between Xist and mir-7a-5p 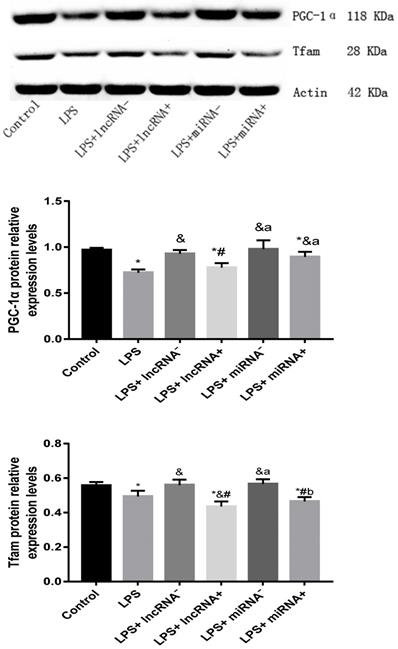 This work is supported by the Department of Pediatric, The Second Affiliated Hospital & Yuying Children's Hospital, Wenzhou Medical University.

This work was supported by the Medical and Health Research Project of Zhejiang Province of China [grant no. 2019311934]; Wenzhou Public Welfare Science and Technology Projects [grant no. Y20180009].