Background: Sesamin is a major bioactive compound in sesame seeds and has various biological properties, including anti-inflammatory and anticancer activities. Here, we explored whether sesamin activates p53, which is widely inhibited in cervical cancer cells, thereby inducing p53-mediated apoptosis.

Results: Sesamin (75 and 150 μM) clearly inhibited SiHa and HeLa cell proliferation in a dose-dependent fashion, but did not affect the proliferation of Hs68 cells. Meanwhile, sesamin increased the sub-G1 phase ratio and apoptosis, up to approximately 38.5% and 37.8%, respectively. Furthermore, sesamin induced p53 phosphorylation at serine-46 and serine-15 and upregulated the levels of PUMA, Bax, and PTEN, while inhibiting AKT phosphorylation at serine-473. Inhibition of p53 by pifithrin-α significantly reduced the levels of PUMA, Bax, and PTEN but restored AKT phosphorylation in SiHa cells exposed to sesamin. Pifithrin-α also reduced apoptosis and restored the proliferation of HeLa and SiHa cells exposed to sesamin.

Conclusions: These findings indicate that sesamin inhibits cervical cancer cell proliferation, and its mechanism may be attributed to the induction of p53/PTEN-mediated apoptosis. This suggests that sesamin might be useful as an adjuvant in promoting anti-cervical cancer treatments.

Although chemotherapy has obvious effects on malignant cancer cells, it also has inevitable cytotoxicity on normal cells and may result in chemoresistance. In the last few years, natural compounds with potential anticancer activity isolated from dietary plants and medicinal herbs have been increasingly and extensively investigated [8]. Sesamin is a sesame lignan with a sesamin content of only 0.5-1.2% in sesame seeds. Mounting evidence has shown that sesamin has various properties, including antioxidant and anticancer activities.

TP53 is an important tumor suppressor gene, and its various mutant forms are widely found in most human tumors. However, in cervical cancer, p53 may be inactivated by binding to viral proteins, rather than through TP53 mutations. Notably, TP53 mutations are rarely found in cervical cancer, but more than 90% of cervical cancers are infected with human papillomavirus (HPV) [9]. The HPV E6 protein interacts with cellular proteins, E6-AP and p53, and promotes p53 degradation through the ubiquitin-dependent proteolytic system, which may result in p53 dysfunction in HPV-infected cervical tissues [10]. Thus, it has been suggested that p53 activation may be a potential anticancer strategy for the treatment of cervical cancer. In this study, we aimed to explore the antiproliferative effects of sesamin on cervical cancer cells, with an emphasis on the p53-mediated apoptotic cascade. Cell proliferation and cell cycle distribution were determined using the CCK-8 assay and flow cytometry, respectively. Protein expression and phosphorylation were assessed using western blotting. The involvement of p53 in the proapoptotic cascade was evaluated using a specific inhibitor.

Cell viability was assessed by using a Cell Counting Kit-8 (CCK8, Sigma-Aldrich). Briefly, cells were cultured in 96-well plates at an initial density of 3×103 per well, and then incubated with the indicated concentration of sesamin for 24 or 48 h. After the incubation, 10 μL CCK-8 solution was added to each well, and the plate was incubated at 37oC for 4 h, then the absorbance at 450 nm was measured using a microplate reader (Molecular Devices, Sunnyvale, CA, USA). The cell viability was presented as mean ± standard deviation at percentage of control.

Cells were maintained in the serum-free culture medium for 16 h prior to treatments, to synchronize cell cycle, then treated with sesamin at the indicated concentrations for 24 h in the culture medium. After the treatments, cells were detached by incubation of trypsin, fixed with 70% ethanol, washed with PBS, then reacted with propidium iodide (PI, 20 μg/mL) for 30 minutes in dark. After the reaction, the cells were subjected to cell cycle distribution analysis using a flow cytometer (BD Biosciences, San Jose, CA, USA). Ten thousand cells were counted for cell cycle distribution quantitation using CellQuest Pro software (version 5.1, BD Biosciences).

Cells were grown to approximate 80% confluence, treated with DMSO, sesamin, or pifithrin-α following sesamin for 24 h, and the cells were collected for cell apoptosis assessment by using an annexin V-FITC apoptosis detection kit (APOAF, Sigma-Aldrich) according to the manufacturer's instructions. Briefly, cells were washed with cold PBS, and then reacted with Annexin V- FITC and PI (20 μg/mL) in the dark for 20 min. Apoptotic cells were analyzed immediately by BD FACScan flow cytometer (BD Biosciences) with CellQuest pro 5.1. For each sample, the fluorescence of 10,000 cells was gated and counted. The degree of apoptosis was presented as a percentage of the annexin V positive and PI-negative (annexin V+/PI-) cells.

After treated with sesamin at the indicated concentrations for 24 h, the cells were washed with PBS, detached by trypsin incubation, collected, and then lysed with the RIPA buffer containing protease and phosphatase inhibitors for crude protein extraction. The crude proteins were separated using SDS-polyacrylamide gel electrophoresis, then transferred onto an Immobilon P PVDF membrane (Merck Millipore, Billerica, MA, USA). The membranes were blocked with 5% skimmed milk for 1 h, and then incubated with primary antibodies against human p53, phosphorylated p53 at serine 15 [p-p53(S15)], p-p53(S46), PUMA, Bax, PTEN, p-AKT(S473), and β-actin at 4°C for 16 h. After the incubation, the membrane was washed with PBST (PBS containing 0.5% Tween-20), and then incubated with the peroxidase-conjugated secondary antibody (Santa Cruz Technology, Santa Cruz, CA, USA). Antibody complex was detected using chemiluminescence development reagent (GE Healthcare, London, UK), and the resulting chemiluminescent signals were acquired and quantitated using a Luminescent Image Analyzer LAS-4000 mini (GE Healthcare).

Sesamin reduces the proliferation of HeLa and SiHa cells, but not Hs60 cells

Effects of sesamin on cell proliferation of human cervical cancer cell HeLa and SiHa and normal dermal fibroblast Hs60. Cells were treated with sesamin at 15, 30, 75, 150, or 300 μM for 24 h (upper panel) or 48 h (lower panel), and then the cell proliferation was determined using CCK-8 assay. Quantitative data were presented as mean ± SD. Three independent experiments were performed for statistical analysis. *, **, and ***, P<0.05, 0.01, and 0.005 as compared to DMSO control.

Based on the observation that remarkable sub-G1 accumulation was clearly induced in SiHa cells in response to sesamin, the effects of sesamin on the apoptotic cascade in SiHa cells were further investigated. As shown in Figure 3A, sesamin clearly increased p53 protein levels and induced p53 phosphorylation at serine 15 [p-p53(S15)] and serine 46 [p-p53(S46)], in a dose-dependent manner. In addition, PUMA and Bax, the important effectors involved in p53-mediated apoptosis, were also upregulated by sesamin.

Sesamin interfered cell cycle progression and induced apoptosis of human cervical cancer cell HeLa and SiHa. Cells were treated with sesamin at 75 or 150 μM for 24 h, followed by staining with (A) PI for cell cycle distribution, or (B) PI/Annexin V for cell apoptosis assay, and then analyzed using flow cytometry. Quantitative data were presented as mean ± SD. Three independent experiments were performed for statistical analysis. **, and ***, P<0.01, and 0.005 as compared to DMSO control. 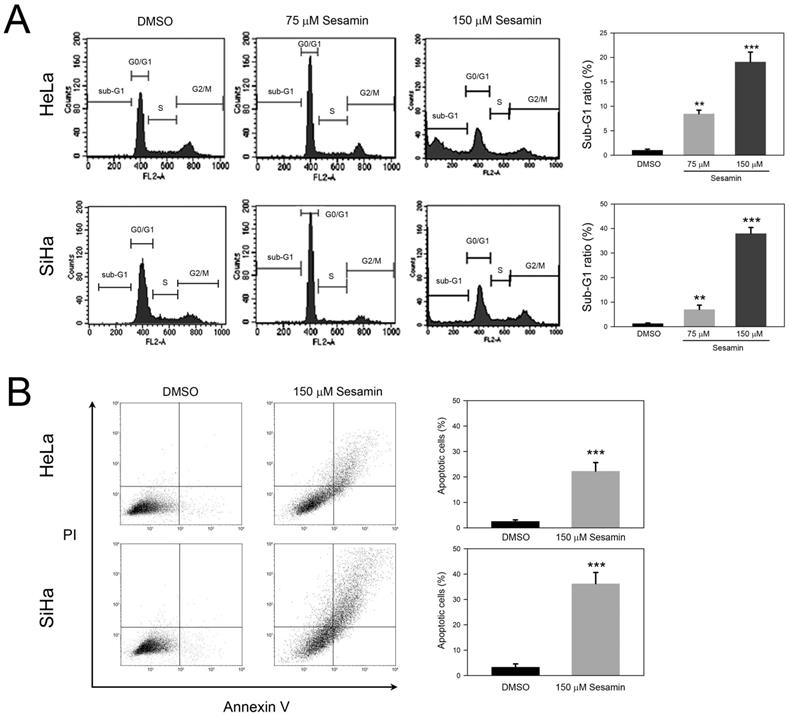 Sesamin induced p53 activation, upregulated expression of PUMA, Bax, and PTEN, and inhibited AKT activation in SiHa cells. Cells were treated with sesamin at 75 or 150 μM for 24 h, collected, and then lysed for protein extraction and the subsequent Western blotting. Protein and phosphorylation level were detected using specific antibodies against (A) p53, phosphorylated p53, PUMA, and Bax; and (B) PTEN, AKT, and phosphorylated AKT. Chemiluminescence signal of β-actin was used as internal control. Molecular weights of signals were indicated. Three independent experiments were performed for statistical analysis. *, and **, P<0.05, and 0.01 as compared to DMSO control. 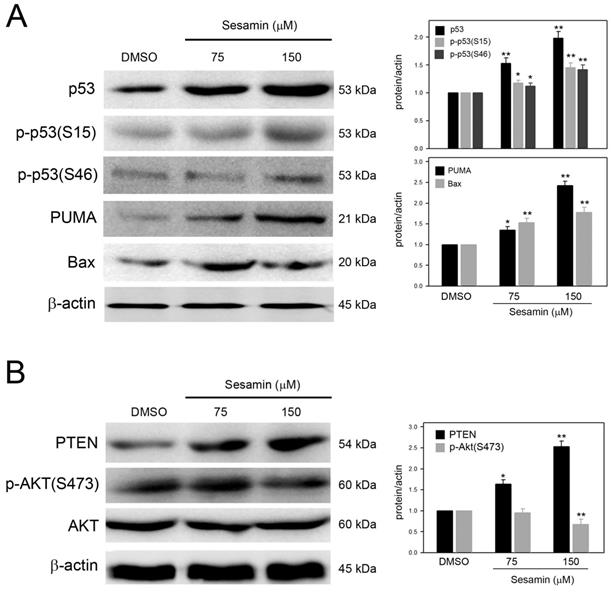 Epidemiological studies have shown an inverse relationship between the intake of botanical foods and the incidence of several cancers [11-13]. Consuming dietary plants benefits cancer prevention, in addition to supplementary treatment with phytochemicals that possess various biological activities, including apoptosis induction, cell cycle regulation, tumor suppressor gene activation, oncogenes inactivation, the suppression of tumor proliferation and progression, and the inhibition of angiogenesis, tumorigenesis, and metastasis. Dou et al. reported that sesamin can lead to apoptosis and inhibit the migratory potential of HeLa cells by inducing ER stress and autophagy [14]. Similarly, our results show that sesamin can disrupt cell cycle progression and inhibit the proliferation of human HeLa and SiHa cervical cancer cells by inducing p53 activation, which indicate that sesamin may have potential anticancer activity against human cervical cancer.

Involvement of p53 activation in sesamin-induced apoptotic cascade in SiHa cells and sesamin-induced cell apoptosis of HeLa and SiHa cells. Cells were pretreated without or with pifithrin-a at 30 μM for 2 h, and then treated with sesamin at 150 μM for 24 h. The treated cells were collected, and then (A) lysed for protein extraction and the subsequent Western blotting using specific antibodies as indicated; (B) stained with PI/Annexin V for apoptosis assay; and (C) reacted with CCK-8 for cell proliferation assay. Chemiluminescence signal of β-actin was used as internal control. Molecular weights of signals were indicated. Quantitative data were presented as mean ± SD. Three independent experiments were performed for statistical analysis. *, **, and ***, P<0.05, 0.01, and 0.005 as compared to DMSO control. # and ###, P<0.05 and 0.005 as compared to sesamin alone.

It is estimated that approximately 99.7% of cervical cancers carry integrated HPV DNA in the host genome [21]. During HPV infection, two major HPV oncoproteins, E6 and E7, may induce transformation and promote tumorigenesis by binding to p53 and pRb, thereby enhancing the ubiquitin-dependent proteasomal degradation of p53 and dysregulation of cell cycle progression [22, 23]. To fully abolish p53 activity, E6 also promotes degradation of the p53 downstream apoptosis inducer Bax [24] and inhibits FADD and pro-caspase 8 [25-27]. Our findings reveal that sesamin not only activates p53 by phosphorylating serine 15 and serine 46, but also upregulates the levels of PUMA and Bax, which suggests that sesamin might inhibit the binding of E6 to Bax, thereby reducing Bax degradation. In addition, these findings also indicate that the p53-mediated PUMA/Bax axis plays an important role in the anti-proliferative effect of sesamin on cervical cancer cells.

16. Agarwal ML, Agarwal A, Taylor WR, Stark GR. p53 controls both the G2/M and the G1 cell cycle checkpoints and mediates reversible growth arrest in human fibroblasts. Proceedings of the National Academy of Sciences of the United States of America. 1995;92:8493-7

23. Heck DV, Yee CL, Howley PM, Munger K. Efficiency of binding the retinoblastoma protein correlates with the transforming capacity of the E7 oncoproteins of the human papillomaviruses. Proceedings of the National Academy of Sciences of the United States of America. 1992;89:4442-6