Conclusions: Chuanxiong Rhizoma might take part in the treatment of DN through pathways associated with steroid hormone, estrogen, thyroid hormone and IL-17. KCNH2, NCOA1, KDR, ADRB2 and NR3C2 were proved to be the hub targets, which were closely related to corresponding active ingredients of Chuanxiong Rhizoma.

Diabetic nephropathy (DN) is a common microvascular complication of diabetes mellitus (DM), which is also the most chronic complication of DM with high risk of disability and difficulty in curing [1]. About 20% ~ 40% of diabetic patients are accompanied with DN [2] and suffer from increased risk of developing into end-stage renal disease (ESRD) [3]. Although many therapies have been tested in animal models, there is still a lack of effective therapeutic drugs for DN since the pathogenesis of DN is very complex, which has not yet been fully understood.

Traditional Chinese medicine (TCM) has been used in the treatment of DN for years [4]. Chuanxiong Rhizoma is one of these TCMs, which was originally used in the treatment of brain and heart diseases [5]. Isolated from the alkaloid of Chuanxiong Rhizoma, tetramethylpyrazine has multiple pharmacological effects including anti-oxidation, improving microcirculation, and inhibiting the production of glycation [6]. Many studies have revealed that Chuanxiong Rhizoma could inhibit the damage of endothelial cell [7] and the proliferation of vascular smooth muscle cell [8]. It could also reduce IL-6, IL-8 and TNF-α level in serum to reduce inflammation [9]. Chuanxiong injection has also been proved to provide protective effects on patients with DN through improving renal function and reducing urine protein level [10, 11]. However, the mechanism of Chuanxiong Rhizoma in DN has not yet been fully studied.

Currently, network-target and multiple-component-therapeutics have been increasingly recommended in the study of TCM [12]. Based on high throughput data and highly-developed algorithm, computational efforts have revolutionized the study of TCM in the ingredient identification and the target prediction. Machine learning approach has also been developed to explore the potential new interpretation of Meridians in TCM [13].

Using complex network and visualization technology, network pharmacology can display multiple targets, multiple pathways and multi-target synergy of TCM in the treatment of many diseases, which could also provide new ideas and effective measures for TCM mechanism research. In addition, multi-database exploration could facilitate mechanism understanding and drug repurposing [14]. In this study, we performed a network pharmacology research focus on Chuanxiong Rhizoma to explore the possible mechanism of its functions on DN, and provide a solid theoretical basis for further study.

Based on the Traditional Chinese Medicine Systems Pharmacology Database and Analysis Platform (TCMSP) [15] and DRUGBANK database [16], we acquired active ingredients of Chuanxiong Rhizoma by according to the strict drug screening criteria: oral bioavailability (OB) ≥ 30% and drug-likeness (DL) ≥ 0.18. The DRUGBANK database provides accurate and reliable prediction of the target proteins corresponding to chemical small molecules of active ingredients. Gene symbols of corresponding target proteins could be acquired from the uniprot database [17]. The action targets associated with DN were also screened from the comparative toxicogenomics database (CTD) [18]. Common target genes of Chuanxiong Rhizoma and DN were then obtained using Venn diagram. The flow diagram of this study was shown in Figure 1.

Flow diagram of the research. 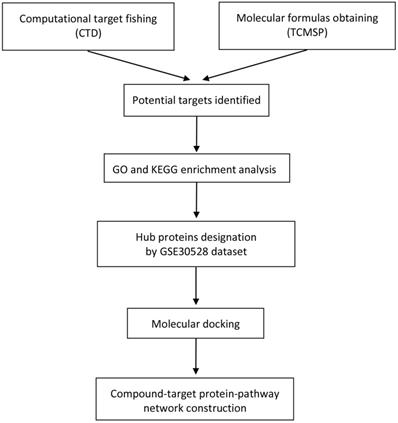 Based on the interactions of target proteins and genes, we performed Gene ontology (GO) biological process analyses and Kyoto Encyclopedia of Genes and Genomes (KEGG) pathway enrichment analyses to predict the potential function of target proteins. The clusterProfiler package in R was used for statistical analysis and visualization of functional profiles for genes and gene clusters [20].

We searched “diabetic nephropathy” in the CTD database and found 18652 DN-related genes. Ultimately, Venn diagram summarized 28 common targets both associated with DN and Chuanxiong Rhizoma (Fig. 3A) for further analysis. Target protein interaction network of Chuanxiong Rhizoma from STRING was shown in Figure 3B. 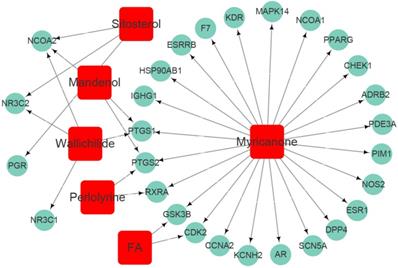 Characteristics of the seven active ingredients of Chuanxiong Rhizoma

Based on GSE30528 dataset, 1366 DEGs associated with DN were identified, which were shown as green plots in Figure 4A, including five targeted genes: KCNH2, NCOA1, KDR, NR3C2 and ADRB2 (red plots in Fig. 4A). Further analysis revealed that gene signatures of KCNH2, NCOA1, KDR and NR3C2 were significantly lower in DN glomeruli tissues when compared to controlled normal glomeruli tissues, while gene signature of ADRB2 was significantly higher in DN glomeruli tissues (Fig. 4B). The corresponding five target proteins were designed as hub proteins with ligand-protein interaction diagrams (Fig. 4C) for further molecular docking analysis.

With the help of SystemsDock, we successfully combined KCNH2, NCOA1, KDR and ADRB2 to Myricanone with docking scores from 4.61 to 6.28. What more, NR3C2 also displayed good binding scores with Wallichilide and Sitosterol (8.13 and 8.34, respectively, Fig. 4D), revealing good binding forces to active compounds of Chuanxiong Rhizoma.

As one of the major causes of ESRD around the world, DN is closely associated with cardiovascular and cerebrovascular diseases and increased mortality of DM patients [26]. DN is characterized by proteinuria and changes in renal ultrastructure, and the prognosis of patients with DN is poor, especially for patients with ESRD. Due to the limitations in the understanding of DN, currently, there is still a lack of accurate treatment strategies specifically targeting at DN in addition to controlling blood sugar, blood lipid levels and hypertension. 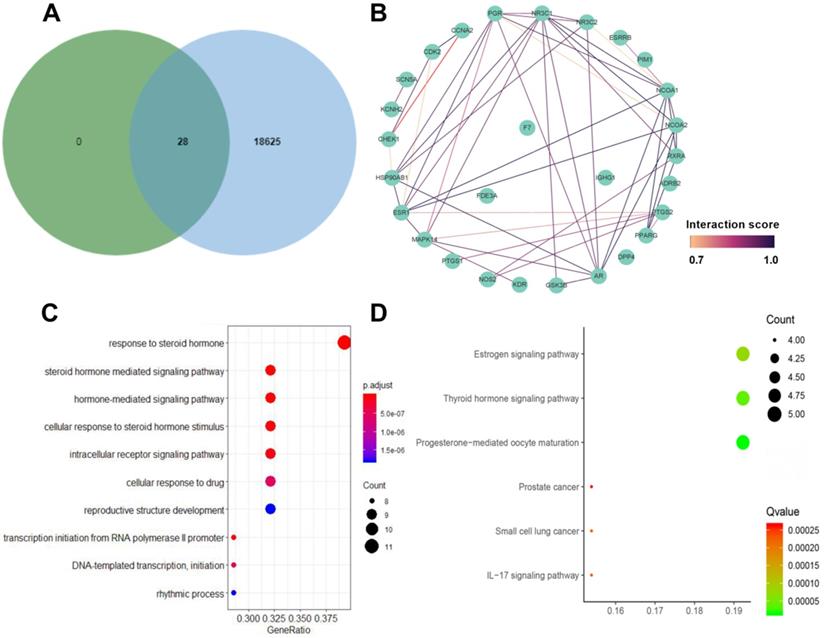 In this study, we carried out a network pharmacology research focus on Chuanxiong Rhizoma to further explore its potential mechanisms on DN. By applying GO biological process analyses, the special targets of Chuanxiong Rhizoma were significantly enriched in hormone-mediated signaling pathway, response to steroid hormone, and other pathways related to reproductive structure development. Previous studies suggested that steroid hormone might play a vital role in the pathogenesis of DN in DM patients [27-29]. Estradiol could inhibit the transcription of type IV collagen and reduce the expression of collagen through activating tyrosine kinase 2 and inhibiting the synthesis of TGF-β to alleviate fibrosis in DN patients [30]. Our study revealed that Chuanxiong Rhizoma might target at steroid hormone in the treatment of DN.

KEGG pathway enrichment analyses suggested that Chuanxiong Rhizoma was associated with estrogen signaling pathway, thyroid hormone signaling pathway and IL-17 signaling pathway in the treatment of DN. Estrogen has been reported to act on renal protection by up-regulating the level of endothelial NO synthase and inhibiting the synthesis of inducible NO synthase to maintain normal renal function [31, 32]. DN patients are often accompanied by hypothyroidism and low triiodothyronine syndrome. Serum free triiodothyronine acts as a key predictor of prognosis in patients with DN [33]. In addition, thyroid hormone replacement therapy could reduce the risk of cardiovascular diseases in DN patients with hypothyroidism [34]. Recently, the relationship between IL-17 and DN has attracted more and more attentions from the researchers. Patients with DN are reported to have elevated levels of IL-17 in their peripheral blood [35]. Here, with the help of network pharmacology analysis, our study revealed that Chuanxiong Rhizoma might take part in the treatment of DN through pathways associated with estrogen, thyroid hormone and IL-17. 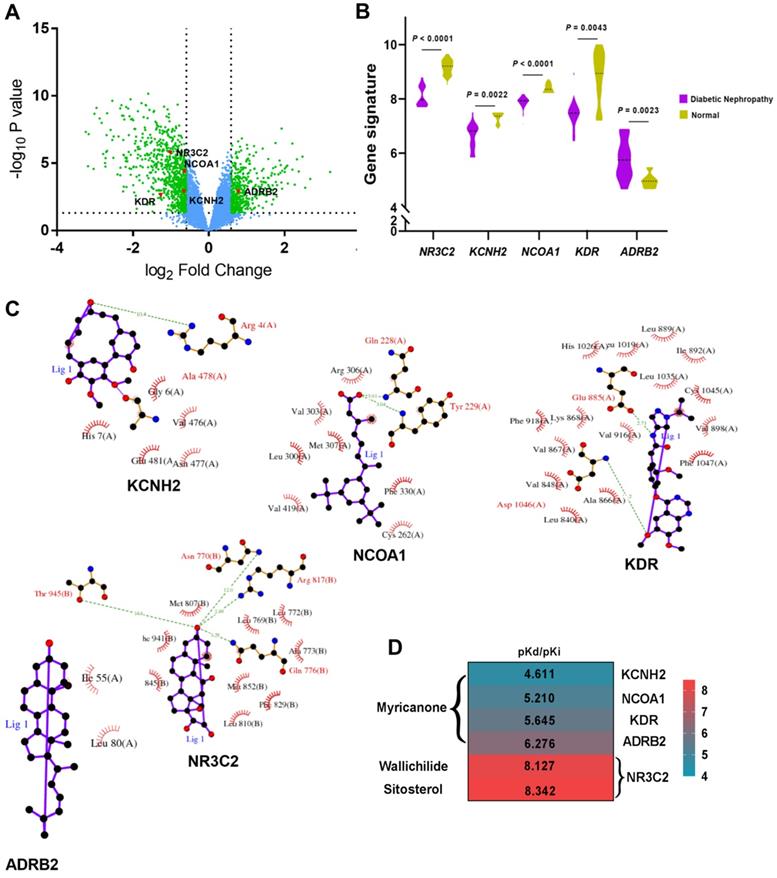 In our study, KCNH2, NCOA1, KDR, ADRB2 and NR3C2 are closely related to corresponding active ingredients of Chuanxiong Rhizoma with favorable molecular docking scores, indicating good binding relationships between compounds and target proteins. Among the hub targets, KCNH2 is involved in ventricular cardiac muscle cell action potential repolarization, while NCOA1 is enriched in thyroid hormone signaling pathway and estrogen signaling pathway. ADRB2 regulates beta-2 adrenergic receptor (β2AR), which has been reported to act on inhibiting of macrophage function [36] and be involved in LPS-induced activation of THP-1 cells [37]. Agonists of β2AR are involved in the regulation of macrophage activation in diabetic cardiovascular and renal complications [38]. 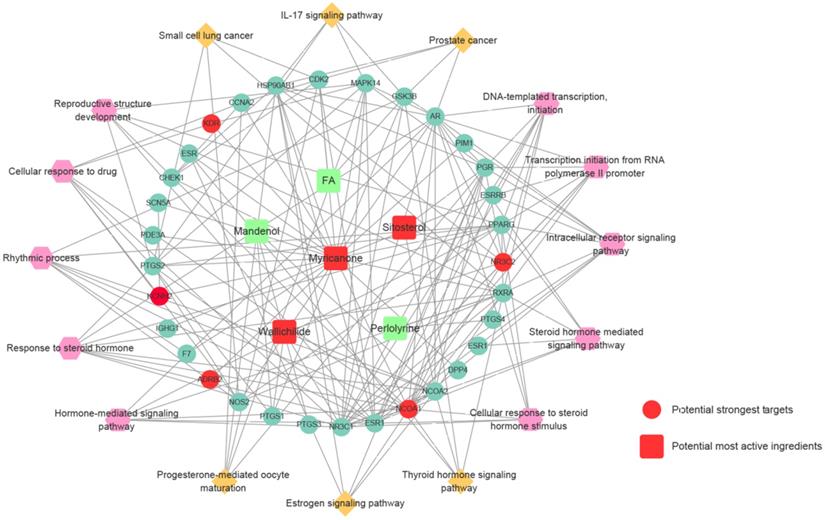 There are still some shortcomings in our study. Firstly, we just explored the potential functional mechanism of Chuanxiong Rhizoma on DN, without analyzing the mutual interferences of drug components. Secondly, this study failed to perform stratification analysis of different pathological stages of DN. Finally, the key targets and pathways we obtained have not been experimentally verified. Further molecular mechanism researches and clinical validations are still needed to be carried out in future work.

Chuanxiong Rhizoma has been proven to play a role in the treatment of DN. Through network pharmacology analysis, our study revealed that Chuanxiong Rhizoma might take part in the treatment of DN through pathways associated with steroid hormone, estrogen, thyroid hormone and IL-17. KCNH2, NCOA1, KDR, ADRB2 and NR3C2 were proved to be the hub targets, which were closely related to corresponding active ingredients of Chuanxiong Rhizoma through molecular docking. However, further molecular mechanism researches and clinical validations are still needed in the future.

The data and materials generated or analyzed during this study are available from the corresponding author on reasonable request.

H-SS and C-ST conceived and designed the research methods. L-ZL and W-YH collected the data. C-ST analyzed the data. H-SS wrote the paper. H-SS and C-ST contributed equally to this work. W-Y supervised this research. All authors read and approved the final manuscript.