Methods: HCC patients within Milan Criteria and without taking anti-platelet drugs were selected in the study. MTT assay, colony formation assay, transwell assay, tube formation and western blot were used to evaluate the effect of platelet lysates on HCC cells in vitro. Lung metastatic assay was performed in vivo.

Conclusions: Platelet lysates from HCC patients after RFA promoted the proliferation, migration, invasion and vasculogenic mimicry of HCC cells, which indicated that RFA in combination with anti-platelet drug may be used to improve the prognosis of HCC.

Hepatocellular carcinoma (HCC) is a major cause of cancer-related mortality worldwide [1]. Ablative therapies, in particular, radiofrequency ablation (RFA) are commonly considered a curative option for patients whose tumors are not amenable to resection [2]. The recurrence rate of HCC within Milan criteria undergoing RFA is 8-26% in three years [3]. Furthermore, tumor progression including rapid growth or metastasis in HCC after RFA could happen.

Platelets play important roles in tumorigenesis, contributing to inflammation, angiogenesis and metastatic dissemination of tumor cells [4]. Circulating platelets contain numerous proteins, including growth factors, chemokines and proteases, which are synthesized by megakaryocytes or absorbed from the blood by the platelets themselves [5]. Platelets may become activated systemically or within the tumor, potentially resulting in release of platelet content into the circulation [6]. Up to 40% of HCC patients have portal vein thrombosis at time of diagnosis, which indicated platelets are activated in HCC [7]. The aggregation of blood platelets around cancer cells protect these cells from the immune system and facilitate their circulation in the bloodstream and their adhesion at potential sites of metastasis [8]. In addition, tumor-associated platelets can release several permeability factors and enzymes that assist metastatic tumor cells to engraft at distant sites [9].

RFA induced tumor cell dissemination in patients with colorectal liver metastases [10]. RFA also increased the circulating tumor cells in patients with primary or metastatic lung tumors [11]. Radiofrequency catheter ablation has become standard treatment for the cure and prevention of atrial fibrillation [12]. However, thromboembolic events could occur as a complication of the procedure. RFA could indeed favor intra-atrial thrombogenesis through activation of the coagulation cascade related to both catheter placement- and radiofrequency-induced tissue injury. Importantly, platelet activation consequent to atrial endocardial injury likely also plays a significant role in initiating the mechanisms eventually leading to thrombosis [13]. However, whether platelets in HCC after RFA promote tumor progression has not been elaborated. In contrast to the heterogeneity displayed by tumor cells, platelets are relatively invariable, and targeting them is potentially, promising method of inhibiting metastasis.

The study was approved by the ethical committee of Beijing Chao-yang Hospital, the approval number was 2015-科-28, and the need to obtain written informed consent was waived. HCC patients within Milan Criteria and without other severe and serious organ disease, taking anti-platelet drugs and receiving chemotherapy or interventional therapy in our hospital were selected in the study. Milan criteria were defined as one tumor ≤5 cm, or two or three tumors with each tumor ≤3 cm without any vascular invasion or metastasis as observed by computed tomography.

In each patient, 5 ml blood samples were collected before RFA and 24 hours after RFA. Blood from patients was drawn directly into two plastic tubes containing 3.8% buffered sodium citrate. Samples were spun at 200 g for 15 min at ambient temperature to obtain platelet-rich plasma (PRP). The PRP was transferred to a clean tube and recentrifuged (500 g for 15 min at ambient temperature). The platelet was used to evaluate the effect of platelet lysates on HCC cell in vitro and in vivo.

Hep3B or HCCLM3 cells were trypsinzed and seeded into 96-well plates at a density of approximately 3 × 103 cells per well. After 24 h, adherent cells were treated with platelet lysates. After 24 h, 48 h and 72 h incubation, MTT reagent was added to the cells (0.5 mg/ml), and cells were then incubated for 4 h at 37°C. The cells media were removed and 150 μl DMSO were added to each well followed by gentle shaking of the plates to dissolve the formazan crystals. The optical density (OD) was then measured using an automated ELISA plate reader at 570 nm.

Briefly, 6-well dishes were seeded with 1 × 103 viable cells and allowed to grow for 24 h. The cells were then incubated in the presence of platelet lysates in DMEM with 2% FBS for 2 weeks. The colonies obtained were washed with PBS, fixed in 4% paraformaldehyde for 20 min at room temperature and then washed with PBS followed by staining with crystal violet.

HCC cells were collected and cell lysis was performed by using RIPA lysis buffer including protease and phosphatase inhibitors on ice. The extracted protein was quantified by bicinchoninic acid quantification assay. Then, the total cellular proteins were subjected to SDS-PAGE gel and transferred to nitrocellulose membranes. The membranes were blocked with 5% non-fat milk for 1.5 h and then incubated with respective primary antibody overnight at 4°C. Following washing three times with TBST for 10 min, the membranes were incubated with the appropriate HRP-conjugated secondary antibody for 1.5 h at room temperature. The bands were captured with SuperSignal West Pico substrate (Thermo scientific, Rockford, IL, USA).

Cell migration assays were operated by a modified Boyden chamber (Costar-Corning, New York, USA). Hep3B or HCCLM3 cells (2 × 104 cells per well) and platelet lysates were added into the upper chamber, and 600 μl DMEM with10% FBS were added into the lower chamber. The chambers were incubated for 24 h. After removing the filter inserts and the cells on the upper side of the filter, the migrated cells on the lower chamber were stained with crystal violet for 20 min, washed with PBS, and captured. Migration was assessed by counting the number of stained cells from 5 random fields.

For cell invasion assay, each insert needed was precoated with Matrigel. The others steps were similar to cell migration assay.

Growth factor-reduced Matrigel (10 mg/ml; BD Biosciences) was thawed overnight at 4°C, and 70 μl was added to each well of a 96-well plate and allowed to solidify for 30 min at 37℃. Hep3B or HCCLM3 cells (2 × 104) were incubated with platelet lysates for 4 h. Capillary tube formation was observed. Total length and number of junctions of the tubes were quantified using ImageJ software and the Angiogenesis Analyzer plugin of the capillary-like structures.

Hep3B-Luc2-tdT cells were treated with platelet lysates for 24 h, and cells (1 × 106 cells) were collected, suspended in 100 μl PBS and injected through tail vein. Three weeks after the injection, the mice were sacrificed and the lung tissues were isolated for in vivo Imaging System (Carestream Health, Inc.). The number of visible tumors on lung surface was counted.

All values are expressed as the mean ± SD. The data were analyzed using Student's t test or the ANOVA test. A P value of <0.05 was considered statistically significant. GraphPad Prism8 (GraphPad Software Inc., San Diego, California, USA) was used for these analyses.

Platelets have been recognized as key player in the regulation of tumor metastasis and angiogenesis [14]. In the present study, platelet lysates from HCC patients after RFA could promote the proliferation, migration, invasion and vasculogenic mimicry of HCC cells, which indicated that anti-platelet therapy may prevent recurrence and metastasis in HCC after RFA. 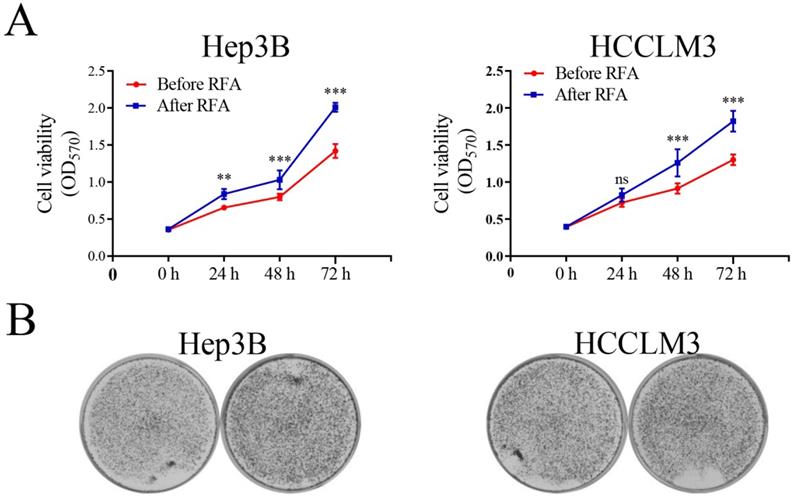 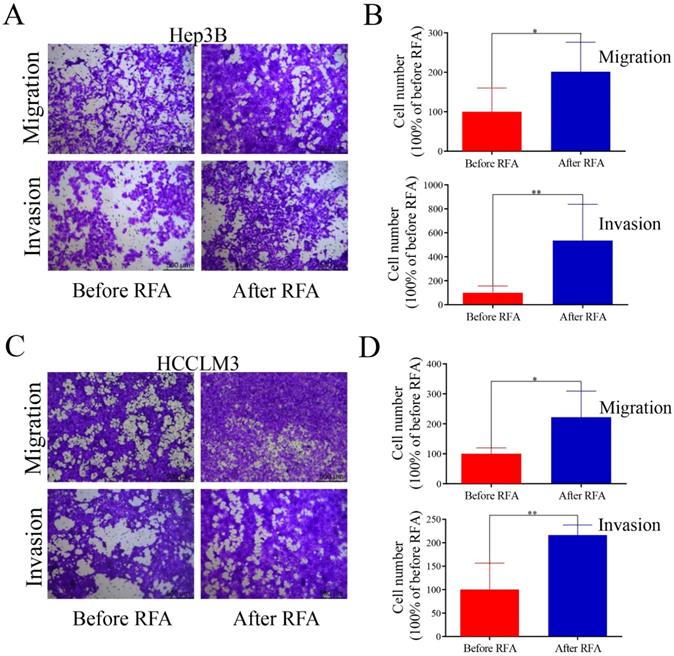 Increased platelet activation has been reported in many types of cancer, and activated platelets participate in the progression of the tumor [15-17]. Following activation, platelets release extracellular vesicles and granule containing exosomes, microparticles and pro-angiogenic protein, which promote tumor growth, metastasis and angiogenesis. In the field of HCC and platelets most researches focused on the prognostic role of platelet to lymphocyte radio or platelet count in HCC [18]. One study demonstrated that no differences in the basal and agonist induced platelets activation status between patients with or without HCC [19]. However, another study suggested that anti-platelet therapy could prevent hepatitis B virus-associated HCC [20]. Platelets extracts also decreased doxorubicin-mediated growth inhibition and apoptosis induction in HCC cells [21]. Platelet extracts induced growth, migration and invasion in HCC in vitro [22]. Platelet releases promoted the proliferation of HCC cells by suppressing the expression of KLF6 [23]. In our study, we found that platelet lysates from HCC patients after RFA could promote proliferation, colony formation, migration and invasion in vitro, which indicated that anti-platelet therapy may be used to prevent the progression of HCC after RFA.

Platelet lysates from patients after RFA facilitate vasculogenic mimicry of HCC cells. Tube formation was performed to evaluate the effect of platelet lysates on vascular mimicry in HCC cells. (A, C) Representative in vitro capillary network formation of HCC cells treated with platelet lysates from patients before or after RFA in Hep3B and HCCLM3 cells. (B, D) Quantitative analysis of the mean number of tube-like structures formed using ImageJ in Hep3B and HCCLM3 cells. Data are presented as mean ± SD. * P<0.05. 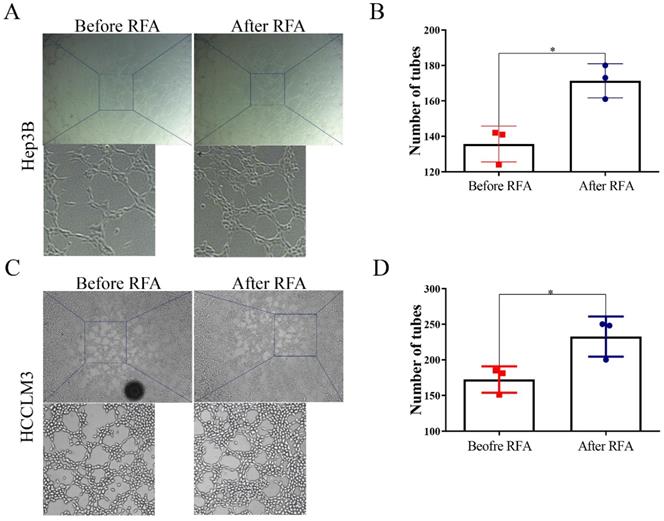 Platelet lysates activate the Akt, ERK1/2 and Smad3 signaling pathways in HCC cells. We also investigated the associated mechanism involved in the process. The expression of p-Akt, p-ERK1/2, snail and E-cadherin was examined in Hep3B (A) and HCCLM3 cells (B) after treatment with platelet lysates from patients before and after RFA using western blot. (C, D) The expression of p-Smad3 was examined in Hep3B and HCCLM3 cells. (E) The statistical results in the expression of E-cadherin, p-Akt, snail and p-ERK1/2 were shown. (F) The statistical results in the expression of p-Smad3 were shown. Data are presented as mean ± SD. * P<0.05; ** P<0.01; ns, no significance. 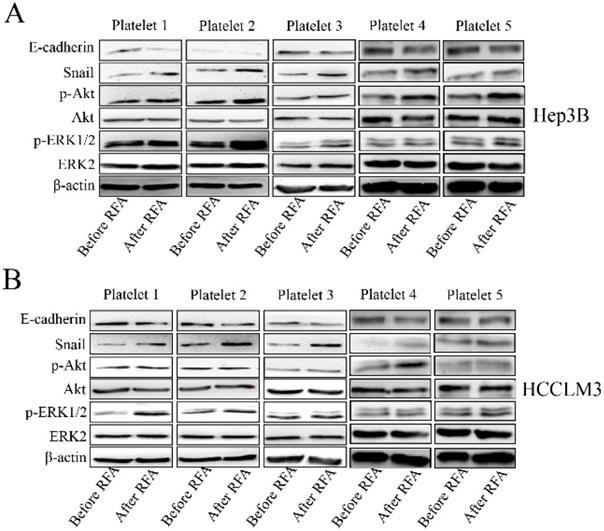 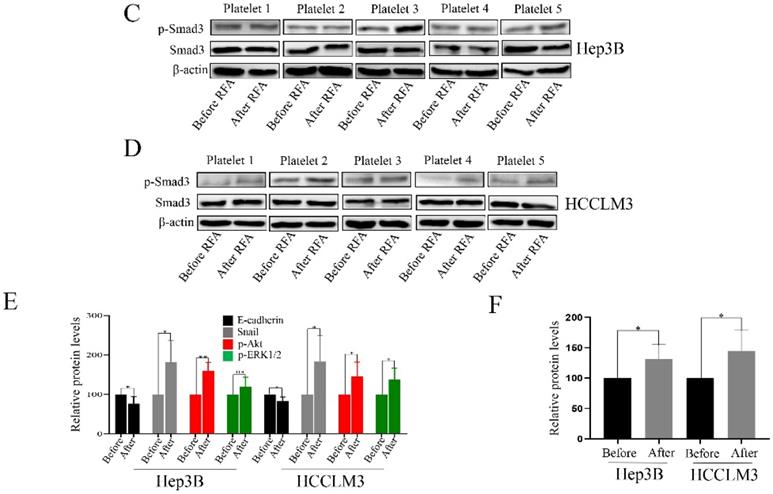 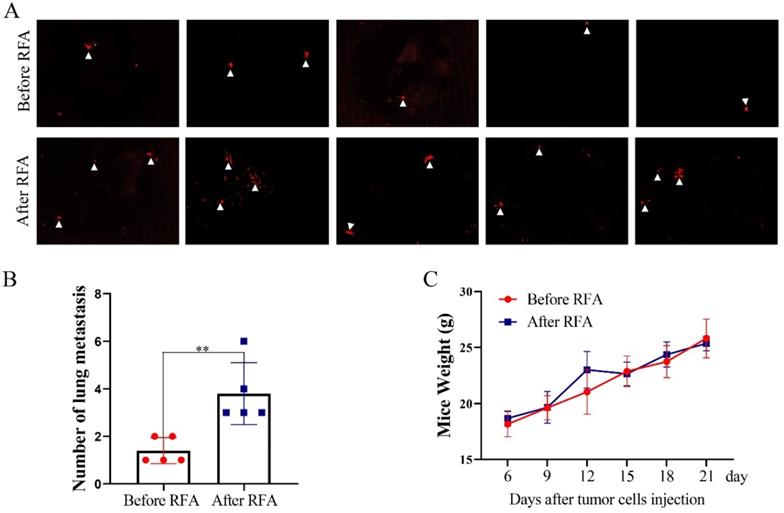 Anti-platelet therapy, especially for aspirin, has shown a promising chemo-preventive agent for many cancer, including colorectal cancer, esophagus cancer, gastric cancer, pancreatic cancer, breast cancer and prostate cancer [30-35]. Anti-platelet therapy has also shown protective effects against HCC in preclinical studies and reduces the risk of HCC in chronic hepatitis B [36]. Anti-platelet therapy is associated with a better prognosis of patients with hepatitis B virus-related HCC after liver resection [37]. Meanwhile, aspirin in combination with TACE could improve overall survival in patients with unresectable HCC [38]. The inverse associated between aspirin use and liver cancer was also demonstrated [39]. One study demonstrated that aspirin as an anti-inflammation drug could inhibit the rapid progression of residual hepatic VX2 carcinoma following RFA [40]. However, in the study, the authors considered that inflammation induced by thermal destruction of the tumor following RFA was the key cause of rapid progression of residual tumor, and aspirin was regarded as an anti-inflammation drug. Our results found that platelet lysates could promote tumor progression in HCC after RFA, therefore aspirin maybe also play the role partly as an anti-platelet drug in the above study. All the results indicated that RFA may combine with anti-platelet drug to prevent the recurrence and metastasis of HCC in the process of RFA.

In conclusion, platelet lysates from HCC patients after RFA promoted the proliferation, migration, invasion and vasculogenic mimicry of HCC cells, which indicated that RFA in combination with anti-platelet drug may be used to improve the prognosis of HCC.

This work was supported by Grants 81502650 and 81572957 from the National Natural Science Foundation of China, Grant QML20190306 from Beijing Hospitals Authority Youth Program and Grant 2019 from Capital Medical University Incubating Program.