The anti-cancer mechanisms of Radix Sophorae Flavescentis were investigated in 5637 bladder cancer cells. Radix Sophorae Flavescentis extract (RSF) (50‑400 µg/ml) inhibited the proliferation of 5637 cells and increased sub‑G1 phase ratios. RSF‑induced cell death was associated with the down-regulation of B‑cell lymphoma 2 (Bcl‑2) and the up-regulation of Bcl‑2 X‑associated protein (Bax). RSF also activated caspase‑3 and -9 and regulated the activations of mitogen-activated protein kinases (MAPKs). In addition, RSF increased intracellular reactive oxygen species (ROS) levels and depolarized the mitochondrial membrane potential. These findings suggest RSF induces apoptosis in 5637 bladder cancer cells and that it has potential use as a novel anti-cancer drug for bladder cancer.

Bladder cancer is one of the most common cancers in the world in the top 10 and is diagnosed with approximately 550,000 new cancers each year [1]. Also, it is difficult to treat because it easily metastasizes and reoccurs [2]. Until now, chemotherapy has been viewed as the most effective way of treating bladder cancer [3]. However, chemotherapy damages normal tissues and has serious side-effects in bladder cancer patients. Therefore, novel anti-cancer drugs with limited effects on normal cells are required [4,5].

Traditional medicine is widely used to treat cancer because it has fewer complications and side effects and is higher quality of life [6,7]. Radix Sophorae Flavescentis is an herb that is used in traditional Chinese medicine to treat and prevent various diseases [8]. In particular, this shrub has anti-cancer effects, for example, it has been reported to induce the apoptosis of laryngeal cancer Hep2 cells [9], esophageal cancer TE‑8 cells [10], PC‑3 prostate cancer cells [11], and gastric cancer cells [12].

Apoptosis provides an important key to cancer treatment strategies, and the signaling pathway associated with cancer cell growth is viewed as a major target for cancer treatment [13,14]. However, relatively little is known about the anti-cancer efficacy of Radix Sophorae Flavescentis and even less is known of the mechanisms responsible for its effects. In the present study, we investigated the anti-cancer mechanisms of an ethanolic extract of Radix Sophorae Flavescentis in 5637 bladder cancer cells.

5637 cells were seeded onto 12‐well plates at a density of 3 × 104 cells/well. Cell viabilities were determined using an MTT assay (Sigma-Aldrich, St. Louis, MO, USA). 5637 cells were treated with MTT solution and incubated for 2 h at 37°C, following which, absorbance was measured at 570 nm.

Induction of a mitochondria-dependent pathway by RSF in 5637 cells 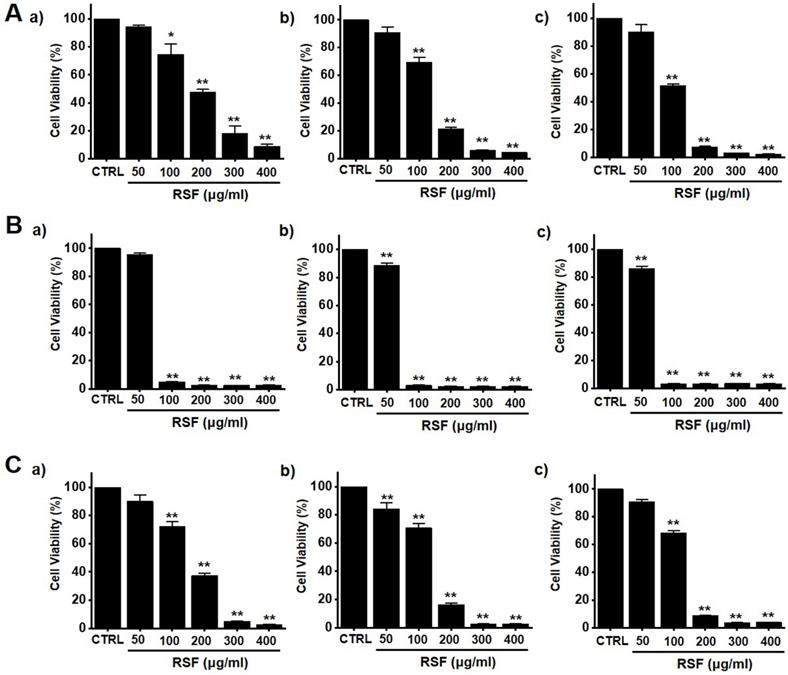 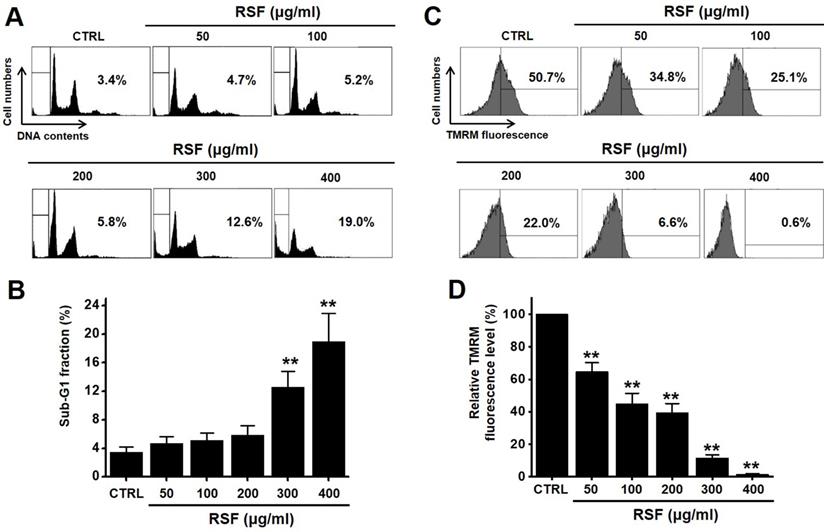 Caspase activations by RSF in 5637 cells

Caspases are important mediators of apoptosis via the intrinsic and extrinsic apoptotic pathways. These induce the activation of cytoplasmic endonucleases, which cleaves various substrates, such as poly (ADP‑ribose) polymerase (PARP). Furthermore, the cleavage product of PARP functions as a sign of apoptosis [18]. RSF dose-dependently increased the activities of caspase -3 and -9, and zVAD-fmk (a broad-spectrum caspase inhibitor) suppressed these activities (Fig. 4A). Also, western blot showed RSF gradually down-regulated the expressions pro-caspase-3 and -9, gradually up-regulated the active forms of caspase-3 and -9, and up-regulated PARP protein levels (Fig. 4B). When 5637 cells were co-treated with z-VAD-fmk and RSF for 24 h, z-VAD-fmk suppressed RSF-induced apoptosis (Fig. 4C). These results indicate that RSF-induced apoptosis was dependent on caspase activation in 5637 cells.

Effect of RSF on intracellular ROS generation in 5637 cells

Since ROS play a key role in apoptosis, we investigated whether RSF generates ROS in 5637 cells. DCF-DA (a fluorescent dye) was used to check the involvement of ROS in RSF-induced apoptosis. Flow cytometry showed RSF significantly increased ROS levels in 5637 cells (Fig. 7).

Caspase activations by RSF in 5637 cells. (A) RSF dose-dependently increased the activities of caspase -3 and -9. (B) 5637 cells were treated with RSF. Membranes were probed with the indicated antibodies, and GAPDH was used as the internal control. (C) In addition, zVAD-fmk (a pan-caspase inhibitor) pretreatment suppressed RSF-induced reductions in cell viability. Results are presented as means ± SEMs. *p<0.05. **p<0.01. GAPDH was used as the loading control. RSF, ethanolic extract of Radix Sophorae Flavescentis; CTRL, control. 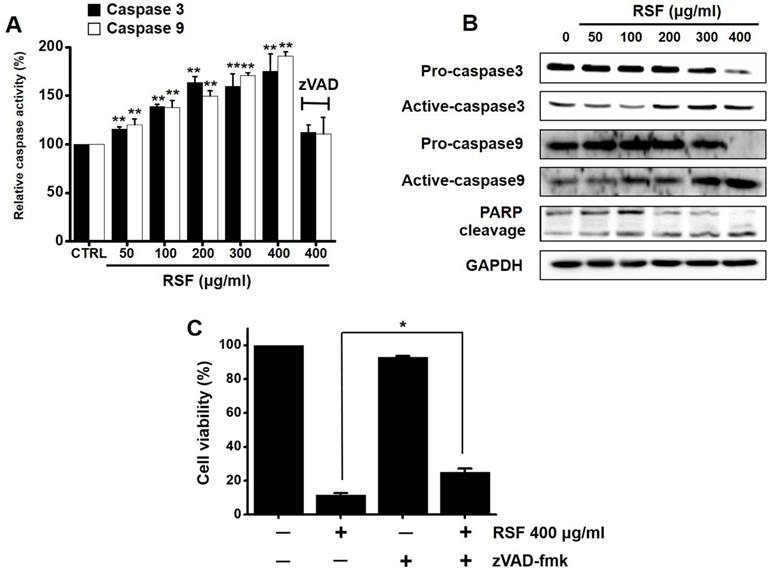 Effect MAPK pathway inhibitors on the effects of RSF in 5637 cells. Cell viabilities were determined using the MTT assay after co-treating cells with RSF plus (A) SP600125 or (B) PD98059. Results are presented as means ± SEMs. *p<0.05. **p<0.01. #p<0.05 between treatments. RSF, ethanolic extract of Radix Sophorae Flavescentis; CTRL, control. 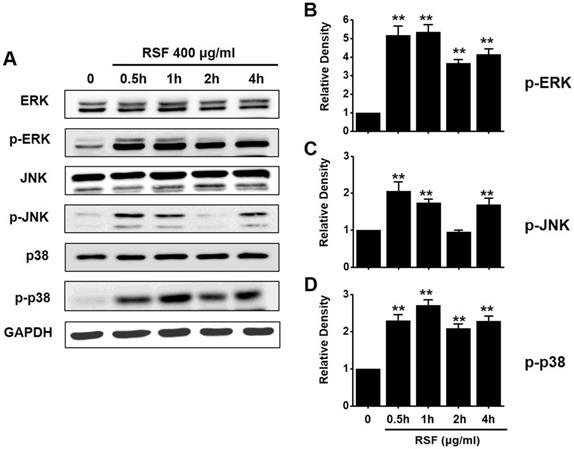 Traditional medicines have recently been accepted as useful complementary and alternative treatments for cancer-related diseases [19]. Radix Sophorae Flavescentis has received much attention because of positive research findings on its anti-cancer efficacy and has also been widely used in traditional medicine for cancer [9-12]. Furthermore, the present study demonstrates that an ethanol extract of this herb (RSF) induces the apoptosis of 5637 bladder cancer cells.

Apoptosis plays a crucial role in normal cell development [20]. Somewhat surprisingly, although apoptosis is known to play a major role in anticancer therapy, its clinical relevance remains unclear [21]. There are two major apoptotic mechanisms: an internal mitochondrial mechanism and an external death receptor mechanism [22]. The internal signaling pathway causes apoptosis and mitochondrial signals that react directly with intracellular organelles [23,24]. On the other hand, the external signaling pathway initiates apoptosis via receptor-mediated interactions [25]. In the present study, BCl-2 and survivin proteins significant decreased when RSF was treated with 5637 cells, while Bax was increased significantly. BCl-2 is an antiapoptotic protein that exhibits oncogenic potential by controlling the intrinsic apoptotic pathway. Our study indicates the decrease in BCl-2 expression in the use of RSF, suggesting that RSF might have the ability to promote apoptosis in 5637 cells. The change in the survivin levels further proves this result. Inhibitor of apoptosis protein (IAP) acts as a control of programmed cell death and apoptosis [26]. Survivin is another member of the IAP family of antiapoptotic protein [27]. Survivin protein functions to inhibit apoptotic pathway and negatively regulates apoptosis of the cells [27-29]. Survivin interacts with caspase-3 and 7, an effector caspases of apoptotic pathway [27-29]. In our study, RSF reduces the degree of Survivin and, therefore, RSF may be a powerful inducer of apoptosis in 5637 cells. The proteolytic system, which involves caspases, is a central component of apoptosis [30,31]. In the present study, RSF gradually up-regulated the active forms of caspase-3 and -9 and gradually down-regulated the expressions of pro-caspase-3 and -9. In addition, RSF gradually up-regulated the activities of caspase-3 and -9, and these increases were suppressed by zVAD-fmk, which also suppressed RSF-induced cell death. In Fig. 3, the non-treated cells showed PARP cleavage and caspase activation. It is thought that AGS cells themselves are weak and may be caused by cell stress. Also, we think the band may look strong due to the relative difference in density. However, in this experiment, the RSF treatment effect is more obvious than non-treatment, so we think the RSF effect is clearly present. These observations indicate that RSF-induced 5637 cell apoptosis via caspase-dependent death receptor signaling and mitochondria pathways in 5637 cells.

MAPKs are involved in intracellular action mechanisms during proliferation, differentiation, stress responses, and apoptosis [36]. Furthermore, MAPK pathways, such as those of ERK1/2, p38 MAPK, and JNK, have been implicated in chemotherapy and particularly in drug toxicity [36,37]. In the present study, we found that RSF activated the ERK, p38, and JNK pathways and reduced 5637 cell survival. In addition, the inhibition of MAPK signaling by PD98059 or SP600125 protected 5637 cells from RSF induced cell death, which suggests the activation of MAPK cascades acts to prevent the proliferation of 5637 cells.

In conclusion, the present study shows RSF inhibits 5637 cell growth and increases the proportion of cells in the sub‑G1 phase. In addition, RSF‑induced apoptosis was found to be associated with the down-regulation of BCl‑2 or survivin and the up-regulation of Bax. Furthermore, RSF activated caspase‑3 and -9 and MAPK cascades and increased intracellular ROS levels. We hope that this research provides an opportunity to develop a cure for bladder cancer.

The present study was supported by a Korean National Research Foundation (NRF) Grant funded by the Korean Government (MSIP) (Grant no. 2014R1A5A2009936).

31. Xue M, Ji X, Xue C. et al. Caspase-dependent and caspase-independent induction of apoptosis in breast cancer by fucoidan via the PI3K/AKT/GSK3β pathway in vivo and in vitro. Biomed Pharmacother. 2017;94:898-908