The main precipitant of glucocorticoid-associated femoral head osteonecrosis is widely accepted to be an ischemic-hypoxic event, with oxidative stress also as an underlying factor. Mitochondrial DNA is more vulnerable to oxidative injury than the nucleus, and mitochondrial transcription factor A (TFAM), which plays roles in its function, preservation, and regulation is being increasingly investigated. In the present study we focused on the impact of TFAM on the relation between the oxidative injury induced by the addition of glucocorticoid to a hypoxic environment and osteocytic cell necrosis. Using cultured osteocytes MLO-Y4 in a 1% hypoxic environment (hypoxia) to which 1µM dexamethasone (Dex) was added (Dex(+)/hypoxia(+)), an immunocytochemical study was conducted using 8-hydroxy-2'-deoxyguanosine (8-OHdG), an index of oxidative stress, and hypoxia inducible factor-1α (HIF-1α), a marker of hypoxia. Next, after adding TFAM siRNA, TFAM knockdown, cultured for 24h, and mitochondrial membrane potential were measured, they were stained with ATP5A which labels adenosine triphosphate (ATP) production. Dex was added to MLO-Y4 to which TFAM had been added, and cultured for 24h in hypoxia. The ratio of dead cells to viable cells was determined and compared. Enhanced expression of 8-OHdG, HIF-1α was found in osteocytes following the addition of glucocorticoid in a hypoxic environment. With TFAM knockdown, as compared to normoxia, mitochondrial function significantly decreased. On the other hand, by adding TFAM, the incidence of osteocytic cell necrosis was significantly decreased as compared with Dex(+)/hypoxia(+). TFAM was confirmed to be important in mitochondrial function and preservation, inhibition of oxidative injury and maintenance of ATP production. Moreover, prevention of mitochondrial injury can best be achieved by decreasing the development of osteocytic cell necrosis.

Although glucocorticoids can be extremely effective therapeutic agents, their diverse side effects are widely known and feared. Glucocorticoid-induced osteonecrosis is one such condition that assumes an intractable course once it occurs. It is widely known that the cause of glucocorticoid-associated femoral head osteonecrosis is an ischemic-hypoxic event. Since the establishment of prophylactic measures and elucidation of the underlying pathophysiology are important issues, various investigations relying on animal experiments have been conducted [1,2], despite which the details of the underlying pathogenetic mechanisms remain elusive. One limitation of research using animal models is that diverse environmental factors may become intricately intertwined with each other in a complex fashion. This may influence and even change the nature of the condition being studied, thereby further interfering with elucidation of the pathophysiological mechanisms. In other words, grasping the underlying pathophysiology in only a single dimension is insufficient. Meanwhile in vitro it is possible to verify and examine the occurrence of injury at the cellular level. Moreover, by using cultured cells in a hypoxic environment to which glucocorticoid has been added, it is possible to create a state similar to that seen in an osteonecrosis animal model, with recently such in vitro studies being increasingly reported [3-5]. Oxidative stress has been implicated in the pathogenesis of this condition, which has prompted the prophylactic use of antioxidants in a number of studies [6,7]. Peroxidation has also been demonstrated to exert an adverse effect on mitochondrial DNA in vivo [8].

MLO-Y4 (kerafast, Boston, USA) murine cultured osteocytic cells, which have been used previously, were cultured [16]. The cells were plated on type I collagen-coated dishes (BD Biosciences, Bedford, USA) and cultured in α-minimal essential medium (α-MEM) supplemented with 2.5% (v/v) FBS, 2.5% (v/v) FCS, streptomycin (100 μg/ml) and penicillin(100units/ml) [17]. Then for the hypoxia experiments, the cells were incubated for 24h in a CO2/tri-gas incubator (Astec, Fukuoka, Japan) set at a mixture of 5% (v/v) CO2 and 1% (v/v) O2 balanced with N2 [5].

MLO-Y4 cells seeded in a type I collagen-coated 4-chamber culture slide (BD Biosciences, Bedford, USA) were cultured overnight. It has been reported that osteocytic cells in the osteonecrosis animal model in which they are cultured in a hypoxic environment to which glucocorticoid is added share the same environment as their natural in vivo one [5]. To conduct a study under the same conditions, cells were exposed under normoxia (20% O2) or hypoxia (1% O2) in the presence or absence of 1μM dexamethasone (Dex) (MSD, Tokyo, Japan) for 24 hours (Dex(-)/normoxia, Dex(-)/hypoxia(+), Dex(+)/normoxia, Dex(+)/hypoxia(+)) [3,5]. In addition, 100nM TFAM (LifeSpan BioSciences, Seattle, USA) was added to Dex(+)/hypoxia(+) and cultured for 24h (TFAM(+)) [13,14]. Viability assays were then performed using an Apoptotic/Necrotic Cells Detection Kit (PromoKine, Heidelberg, Germany) according to the manufacturer's instructions, and the percentages of apoptotic/necrotic cells relative to the total cell number were determined. In the viability assays, apoptotic cells can be detected by staining with fluorescein-labeled annexin V (green fluorescence) and necrotic cells by that with Ethidium homodimer III, a highly positively charged nucleic acid probe, which is impermeant to live cells and early apoptotic cells, but stains necrotic cells and late apoptotic cells (entering into secondary necrosis) with red fluorescence. Fluorescence-positive cells were evaluated by phase contrast and fluorescence (470 nm and 530nm LED modules) microscopy using Axiovert.A1 FL-LED (Carl Zeiss, Jena, Germany).

To determine whether mitochondria were preserved, mitochondrial membrane potentials were measured. Cultured cells were stained with Mito Tracker Red CMXRos (Therno Fisher Scientific, MA, U.S.A) at a final concentration of 200nM in culture medium at 37°C under 20% O2 and 5% CO2 for 30 minutes. Cells were then fixed with 4% paraformaldehyde; nuclei were stained with 4', 6-diamidino-2-phenylindole (DAPI).

Mitochondrial DNA sustained injury due to the TFAM knockdown, culminating in apoptosis [19], and so to identify the cause of the apoptosis JC-1 staining was conducted. Culture cells in 6-well plates at a density of 5 × 105 cells/ ml in a CO2 incubator overnight at 37 °C. 200μl of the JC-1 staining solution (JC-1 Mitochondrial membrane potential assay, Cayman, Ann Arbor, U.S.A) was added into each well. Samples were incubated in a CO2 incubator at 37°C for 30 minutes. After incubation, images were acquired using the BZ-X700 (KEYENCE, Tokyo, Japan). Viable cells were detected as red and apoptotic cells as green.

To confirm the loss of mitochondrial function, we stained for the presence/absence of adenosine triphosphate (ATP) production, which is a major component of mitochondrial function. Also, since oxidative injury has been implicated in the osteonecrosis animal model [2], we performed immunocytochemical studies of the oxidative stress marker 8-hydroxy-2'-deoxyguanosine (8-OHdG) as well as hypoxia inducible factor-1α (HIF-1α), an index of hypoxia. Cultured cells were fixed in 4 paraformaldehyde, washed in phosphate buffered saline (PBS), and permeabilized with 0.3% Triton X-100 in PBS. Nonspecific binding was blocked by incubating sections with 10% bovine serum albumin (Dako Cytomation, Santa Clara, CA) in PBS for 15 minutes. They were incubated with anti-ATP synthase (ATP5A) (Proteintech, IL), anti-8-OHdG (Abcam, Cambridge, U.K), and anti-HIF-1α (Abcam) antibody for 2 hours at a concentration of 10.0, 5.0, or 5.0 µg/ml, followed by a fluorescent-labeled secondary antibody (Alexa 488, Therno Fisher Scientific) and by DAPI for 30 minutes. After washing, a prolong diamond antifade mountant (Therno Fisher Scientific) was added, and cover slips were mounted. Images were acquired using Zeiss-LSM710. For ATP5A, cultured cells were labeled with the first antibody after labeling with the mitochondrial membrane potential-dependent probe.

All quantified results were expressed as the mean ± SD. Statistical significance in the comparison of apoptosis or necrosis between the control and each of the experimental groups was analyzed with Dunnett's multiple comparisons test. P values less than 0.05 were accepted as statistically significant. The statistical analysis was performed using StatView J-5.0 software (SAS Institute, Cary, USA). 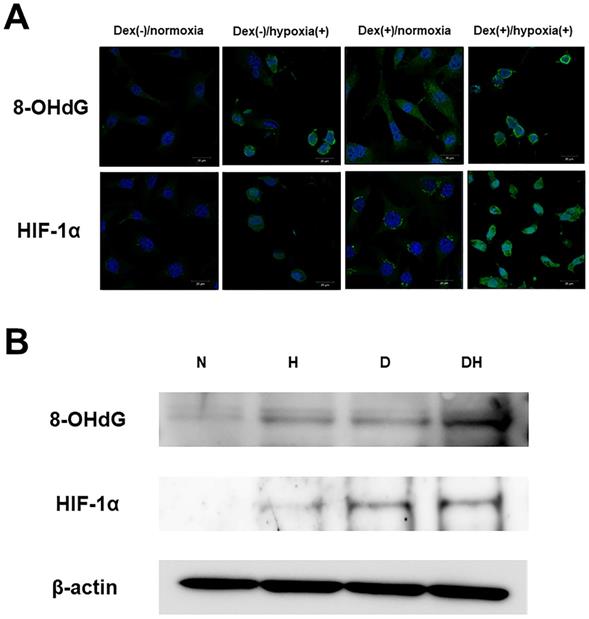 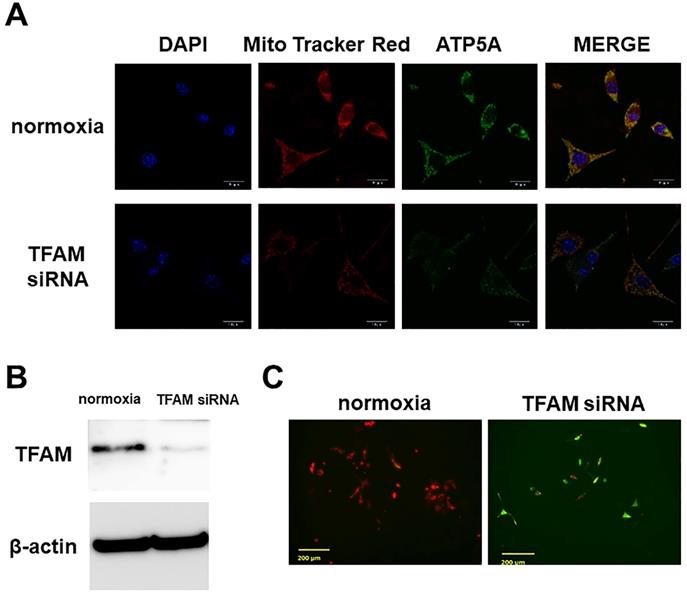 Tissue hypoxia and tissue oxidative stress have been documented in earlier studies to play significant roles in the development of glucocorticoid-induced osteonecrosis [2]. In hitherto conducted osteonecrosis-related research using osteocytes cultured in a hypoxic environment with addition of glucocorticoid, angiogenesis-osteogenesis coupling injury (A-O injury) in vivo has been reproduced in vitro, with a significant increase in osteocytic cell necrosis also documented [5]. In the present investigation, the expression of 8-OHdG was enhanced in an environment the same as that of osteocytes. In this way, it was confirmed that severe oxidative injury could be induced just like in an osteonecrosis animal model subjected to hypoxia and glucocorticoid administration. Furthermore, it was confirmed from the state of HIF-1α expression that osteocytes are exposed to even greater hypoxic stress with the combination of hypoxia and glucocorticoids than with exposure to either stressor alone. Because HIF-1α suppresses the oxidative phosphorylation reaction by mitochondria, it is known to inhibit mitochondrial function and induce cell death [20-22]. Namely, A-O injury itself is thought to cause cell death in osteocytes thereby creating a worst case scenario.

In this experiment, our attention was drawn to mitochondria that are very adversely impacted by diverse stresses including oxidative injury, and TFAM which plays roles in the preservation and repair of mitochondrial DNA. Under in vivo conditions, intraosseous TFAM has been shown to decrease following glucocorticoid administration [11]. Since TFAM is originally present intracellularly, by knocking down TFAM with siRNA, the performance of TFAM in the osteocytic cells themselves could be confirmed. It has been suggested that exhaustion of the supply of TFAM in osteocytic cells threatens the preservation and survival of their mitochondria, with ATP production also ceasing. Namely, the TFAM present in osteocytic cells must be regarded as an essential factor for the preservation of mitochondria and cells.

In the heart failure model, inducing overexpression of cardiomyocyte TFAM has been reported to inhibit mitochondrial oxidative stress, and to improve cardiac function by suppressing pathologic cardiac hypertrophy [13,14]. In the present experiment as well, by inducing overexpression of TFAM in osteocytic cells cultured in a hypoxic environment to which glucocorticoid was added, inhibition of oxidative injury and mitochondrial dysfunction were confirmed. In the osteonecrosis animal model, both oxidative injury and mitochondrial injury have been implicated [2,11]. The results of the present study implicated oxidative injury in the creation of a state that culminated in the development of osteocytic cell necrosis. Moreover, since the addition of TFAM suppressed the development of osteocytic cell necrosis, we concluded that mitochondrial dysfunction is deeply implicated in this process. This means that to prevent osteocytic cell necrosis, inhibition of oxidative and hypoxic injuries due to stress, as well as minimizing the mitochondrial functional injury associated with these injuries are of great importance. At present, various experiments focusing on prevention are underway. From now on studies focusing on preservation of mitochondrial function too will be needed, while clinically strategies to help preserve mitochondrial function in osteocytes should also be actively pursued.

Oxidative stress and hypoxia marker expression and number of osteocytic cell deaths after TFAM addition to osteocytes subjected to glucocorticoid administration in hypoxic environment. TFAM was added to Dex(+)/hypoxia(+) and cultured for 24h (TFAM(+)). A. Immunofluorescent staining of 8-OHdG and HIF-1α with the addition of TFAM. With the addition of TFAM, the expression of both 8-OHdG and HIF-1α was inhibited. Each five independent experiments were carried out. (Scale bar: 20 µm) B. Graph indicates the percentages of apoptotic and necrotic cells in the indicated conditions. The numbers of apoptotic or necrotic cells were counted and related to the total number of cells. Columns and bars indicate means and S.D. respectively (n=5). C. Immunofluorescent staining of apoptotic and necrotic cells using an Apoptotic/Necrotic Cells Detection Kit as described in Materials and Methods. With addition of TFAM a significant decrease in the number of osteocytic cell deaths was noted as compared with Dex(+)/hypoxia(+) (*p<0.01). (Scale bar: 100 µm). 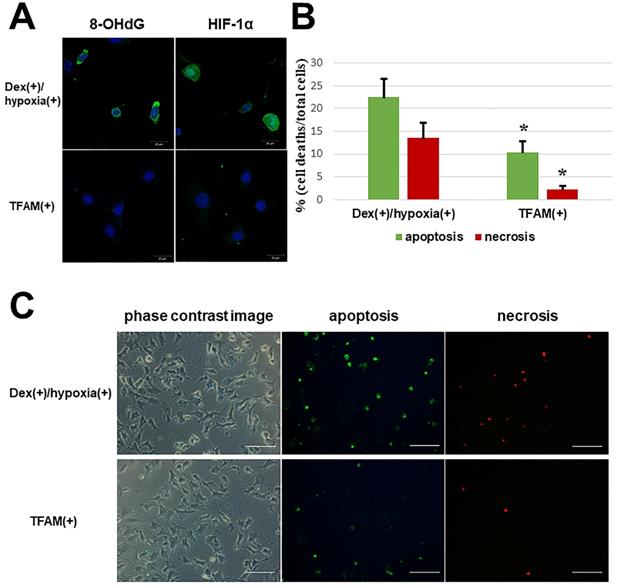