Expression, Regulation and Function of MicroRNAs in Multiple Sclerosis

MicroRNAs (miRNAs) are single-stranded 19-25 nucleotide-long RNAs and have an important role in post-transcriptional gene silencing. It has been demonstrated that miRNAs are dysregulated in patients with multiple sclerosis (MS). For instance, miR-21, miR-142-3p, miR-146a, miR-146b, miR-155 and miR-326 were up-regulated in both peripheral blood mononuclear cells (PBMCs) and brain white matter lesions from MS patients and mouse model as well. These up-regulated miRNAs may be used as a signature for MS and play critical roles in MS pathogenesis. Moreover, miR-15a, miR-19a, miR-22, miR-210 and miR-223 were up-regulated in both regulatory T cells (Tregs) and other samples such as plasma, blood cells, PBMCs and brain white matter tissues from MS patients, suggesting that these up-regulated miRNAs and Tregs may also play a role in MS pathogenesis. Contrarily, other miRNAs such as miR-15a, miR-15b, miR-181c and miR-328 were down-regulated in MS. Drugs such as interferon-β and glatiramer acetate for MS treatment may regulate miRNA expression and thus have benefits for MS patients. The dysregulated miRNAs such as miR-155 and miR-326 may be used as diagnostic markers and therapeutic targets for MS.

Multiple sclerosis (MS) is an autoimmune disease that severely affects people worldwide. MS disease onset usually occurs in young adults, and it is more common in women than men [1, 2]. It hasbeen estimated that a lifetime risk for MS is one out of 400 [1]. MS was discovered about a hundred and fifty years ago; however, neither the etiology nor the mechanism of the disease is fully understood. Moreover, there is also no cure for the disease. The current available treatments have only modest effects and therefore, there is greater need not only for the treatment of MS but also for the understanding the mechanisms of development of the disease.

MicroRNAs (miRNAs) are single-stranded 19-25 nucleotide-long RNAs and have an important role in post-transcriptional gene silencing by base pairing with target mRNAs. Recent research has demonstrated that miRNAs are involved in several crucial biological functions, as well as, in a broad spectrum of human diseases such as neurological disorders [3]. It has been reported that miR-29b was up-regulated in memory CD4+ T cells from the peripheral blood of MS patients, however, miR-29b expression was inhibited significantly upon T cell activation in MS patients [4], suggesting that miRNA expression was dysregulated in MS patients and may contribute to MS pathogenesis. Thus, research on the expression, regulation and function of miRNAs in MS has attracted much attention in recent years (Fig. 1). In this paper, we reviewed the recent progress in understanding the roles of miRNAs in MS pathogenesis, and specific miRNAs as biomarkers and therapeutic targets for MS. 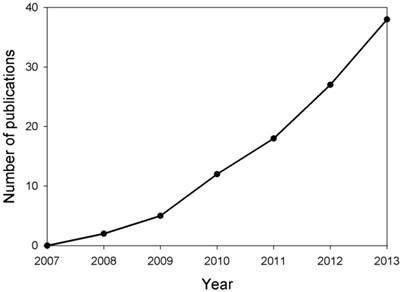 Expression of miRNAs in MS

Abnormal expression of miRNAs in Peripheral Blood and Plasma

Unusual expression of miRNAs in B Cells and monocytes

In one study, miR-155 expression was shown to be significantly increased in peripheral circulating CD14+ monocytes from patients with MS as compared with monocytes from control donors [25].

Dysregulation of miRNAs in Brain

Studies showed that miR-181c and miR-633 were up-regulated, whereas miR-922 was down-regulated in the cerebrospinal fluid of MS patients as compared with other neurologic diseases [32].

miRNAs in bold were those expressed in Treg cells and other samples including brain, blood cells, PBMC and plasma.

miRNAs in bold and italics were those expressed in PBMCs and other samples including brain, plasma and EAE mice.

miRNAs in bold were those expressed in PBMCs and brain lesions of MS patients.

miRNAs in bold and italics were those expressed in three different samples including blood, B cells and T cells or blood, plasma and T cells.

Regulation of miRNAs in MS

Natalizumab is a monoclonal antibody against α4-integrin and is used in the treatment of MS patients [41]. miRNA microarray analysis found that 10 miRNAs including miR-19b, miR-106b, miR-142-5p, miR-150, miR-191, miR-383, miR-551a and miR-598 were up-regulated in B lymphocytes of peripheral blood samples from RRMS patients 6 months after natalizumab treatment as compared with untreated RRMS patients [24]. In addition, 2,3,7,8-tetrachlorodibenzo-p-dioxin (TCDD), an activator for aryl hydrocarbon receptor, could induce anti-inflammation and increase miR-132 expression in EAE mice, and thus suppress EAE [42]. The results suggest that non-immune modulated drugs may also regulate miRNA expression in MS and could potentially be used in the treatment of MS patients.

Function of miRNAs in MS

As indicated above, while most studies have shown altered expression of miRNA during MS, the significance of this is unclear. It has been shown that miRNAs are involved in several crucial biological functions and human diseases such as neurological disorders [3]. Thus, it is not surprising that dysregulated miRNAs play an important role in MS and EAE development. It has been reported that miR-18b and miR-599 may play a role at the time of relapse and miR-96 may be associated with remission of RRMS patients [43].

It has been shown that the up-regulation of miR-124 in the hippocampi was associated with demyelination in the brain of patients with MS [30]. Other studies revealed that miR-34a, miR-155 and miR-326 increased in active multiple sclerosis lesions and decreased CD47 expression, leading to macrophage release from inhibitory control and phagocytosis of myelin [28]. The results suggest that specific miRNAs may have a critical role in demyelination, which contributes to MS pathogenesis.

The dysfunction of the blood-brain barrier (BBB) was reported to be associated with the pathogenesis of MS and down-regulation of miR-125a-5p was involved in the regulation of immune cell efflux and tightness of endothelial cells in the BBB [45], suggesting that miR-125a-5p may play a role in MS.

Our data analysis discovered that miR-21, miR-142-3p, miR-146a, miR-146b, miR-155 and miR-326 were up-regulated in both PBMCs and brain white matter lesions from MS patients and EAE mice as well (Table 1). It has been documented that miR-21 promoted IFN-γ and IL-17A production in T cells, which were responsible for Th1 and Th17 development, targeted programmed cell death protein 4 (PDCD4) and thus inhibited apoptosis [47]. miR-142-3p not only inhibited IL-10 expression in CD4+ T cells [48], but also targeted D1 dopamine receptor in the brain and suppressed neuronal growth and development [49]. miR-146a was positively correlated with IL-17 production by inhibiting target gene IRAK1 [50] and regulated inflammation in human neurological disorders by targeting IL-6 and COX-2 [51]. miR-146b may have anti-inflammatory activity by activating the NF-κB pathway [52] and inhibiting proinflammatory cytokine and chemokine production [53]. It has been demonstrated that miR-155 promotes Th1 and Th17 cells and miR-326 increases Th17 cells, leading to severe disease in MS patients and EAE mice [9, 14]. Potential gene targets of miR-21, miR-142-3p, miR-146a, miR-146b, miR-155 and miR-326 include transcription factors (such as STAT1, STAT4, and FoxP3), chemokines, cytokines (such as IFN-γ, TNF-α, TGF-β, IL-2, IL-6 and IL-17), cell apoptosis regulators and growth factors (Fig. 2). Therefore, these up-regulated miRNAs may play critical roles in MS pathogenesis (Fig. 2 and Table 3). 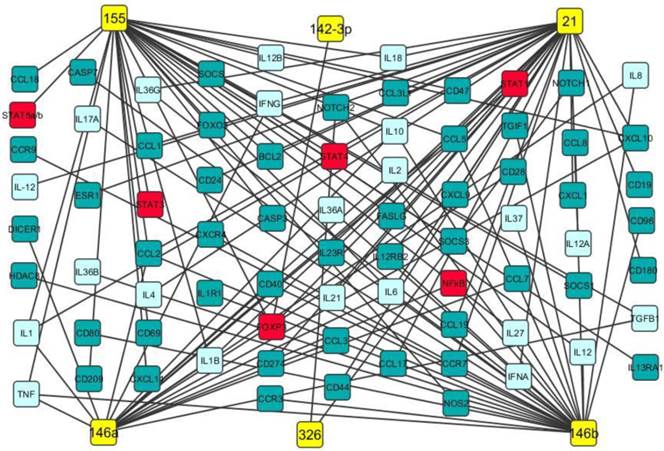 Functions of dysregulated miRNAs in patients with multiple sclerosis

It has been shown that the expression of miR-20a-5p and miR-7-1-3p decreased in the blood of patients with MS and thus miR-20a-5p and the other validated miRNAs may be used as biomarkers for MS [5]. miR-92a-1*, miR-145 and let-7 family of miRNAs increased significantly in the plasma of patients with MS [7], whereas miR-15b, miR-23a and miR-223 were down-regulated in the serum samples from patients with MS as compared with normal controls [10]. The results suggest that circulating miRNAs may be used as blood biomarkers to diagnose MS.

Our data analysis demonstrated that miR-21, miR-142-3p, miR-146a, miR-146b, miR-155 and miR-326 were up-regulated in PBMCs and brain white matter lesions from MS patients (Table 1). Therefore, it is possible that these up-regulated miRNA may be used as diagnostic markers for MS (Table 3). 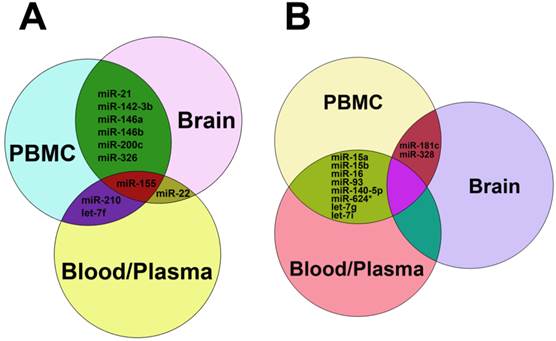 Studies have demonstrated that suppression of miR-155 expression could inhibit the development of Th1 and Th17 cells, resulting in the decrease of disease severity in mice with EAE [9]. Furthermore, anti-miR-155 treatment significantly inhibited EAE development [54]. It has been demonstrated that miR-155 expression increased significantly in patients with MS [25-27].Therefore, miR-155 may be a good therapeutic target for MS.

It has been shown that down-regulation of miR-125a-5p was responsible for the BBB dysregulation associated with MS, and thus miR-125a-5p may be used in the recovery of BBB function for effective treatment of MS [45].

Studies showed that miR-124 expression increased in the demyelinated brain hippocampi from patients with MS [30, 31], suggesting that miR-124 may play a role in the pathogenesis of MS and could be a therapeutic target for MS patients.

miRNAs were firstly identified in the early 1990s [55]. Recently, studies have demonstrated that miRNAs have multiple functions in negative gene regulation and play important roles in most biological processes [56-58]. In patients with MS, reports have shown that miR-27b, miR-128 and miR-340 inhibit IL-4 expression, suppress Th2 development and induce a shift from Th2 to Th1, leading to MS pathogenesis (Fig. 4). miR-21, miR-155 and let-7e promote Th1 and Th17 development, miRNA-21 increases the expression of both IFN-γand IL-17, miR-146a increases IL-17 expression, miRN-326 promotes Th17 development, and miR-142-3p inhibits IL-10 expression, which contribute to MS pathogenesis. miR-23b suppressed IL-17 expression and thus inhibited MS pathogenesis. These dysregulated miRNAs may be used as therapeutic targets for MS (Fig. 4). Therefore, studies on the expression, regulation and function of miRNAs in patients with multiple sclerosis will provide the unique insights for the development of specific miRNAs as diagnostic markers and therapeutic targets for multiple sclerosis in the future (Table 3, Figs. 3 and 4). 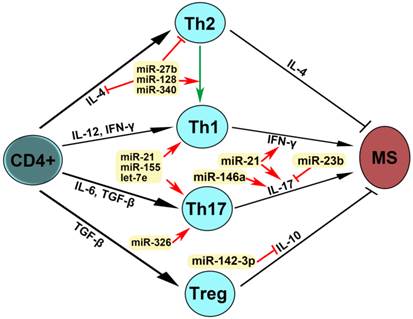 This work was supported by a grant (#81341037 to JZ) from the National Natural Science Foundation of China and “Taishan Scholar” Special Fund (#109, 2012 to JZ) from the Shandong Government, China.

27. Junker A. Pathophysiology of translational regulation by microRNAs in multiple sclerosis. FEBS Lett. 2011;585:3738-46

32. Haghikia A, Hellwig K, Baraniskin A. et al. Regulated microRNAs in the CSF of patients with multiple sclerosis: a case-control study. Neurology. 2012;79:2166-70