The Ratio of Second to Fourth Digit Length (2D:4D) and Coronary Artery Disease in a Han Chinese Population

Background: The association between index finger to ring finger length ratio (2D:4D) and cardiac disorders has been reported, however it has not been discussed in terms of coronary artery disease (CAD). We investigated whether 2D:4D could be used as a marker for predisposition to CAD as assessed by coronary angiography in Chinese men and women.

Methods: This study included 1764 persons divided into 4 groups, 441 cases with CAD and 441 persons without CAD as control in each sex of the same age. Finger lengths were measured twice for both hands using electronic calipers. Student t test was used to detect the difference of 2D:4D among groups. The receiver operator characteristic curves (ROCs) were used to detect the diagnostic effect of 2D:4D for CAD.

Conclusions: The present study showed an association between high 2D:4D ratio and CAD in both hands in men. There were no significant differences in mean 2D:4D between women with CAD and controls.

Coronary artery disease (CAD) is rapidly increasing in prevalence across the world [1,2]. Therefore, it would be useful to identify a group of simple and reliable indicators for the identification of the persons at risk of CAD in the earlier stages in order to enable appropriate health interventions.

Testosterone has demonstrated effects on insulin resistance, obesity, myocardium, coagulation, inflammation, vasodilation, and endothelial function as reviewed by Choi [3]. High androgen levels have historically been linked with an increased risk for coronary artery disease (CAD) [4,5], although the relationship is controversial [6].

It is believed that unbalanced exposure to prenatal testosterone or estrogen may be relate to the aetiology of series of phenomena and disorders including left-handedness, autism, dyslexia, migraine, stammering, ventricular septal defect, pulmonary stenosis and patent ductus arteriosus [7-10].

CAD is sexually dimorphic, such that it is more prevalent in males. There is also a sexual dimorphism in the ratio of the length of the 2nd digit (index finger) and the 4th digit (ring finger) (2D:4D) in humans [11,12,13]. Manning et al [13] suggested that the 2D:4D ratio is a marker for testosterone and oestrogen levels towards the end of the first trimester of pregnancy. The 2D:4D may therefore be a predictor of fertility, and the pattern of differentiation of the central nervous system. During past decades, the relationship between 2D:4D and sex steroids related diseases including infertility, gastric cancer, breast cancer and prostate cancer have been discussed in several ethnic groups [13-16].

Researchers in China indicated that men showed significantly smaller 2D:4D ratios than women in both hands as in other ethnic groups [17,18], higher 2D:4D of the right hand was associated with lower fertility in infertile males [17] and 2D:4D was negatively correlated with handgrip strength in males but not in females [19].

As for CAD, four studies have shown a significant positive association between 2D:4D and atherosclerotic diseases. Manning et al [20] found a negative relationship between 2D:4D ratio and age at first MI, that is men with low 2D:4D ratio tended to have their first MI's later in life than men with high 2D:4D ratios. Fink et al [21] reported a significant positive correlation between 2D:4D and neck circumference for men but not for women after controlling for body mass index, they thus suggested a predisposition for men towards CAD via 2D:4D as proxy to early sex-steroid exposure. A study including 50 men and 50 women in Greece reported that in men with MI, 2D:4D ratios were significantly higher than the respective ratios in healthy men, but no significant differences were observed in the ratios between women with MI and healthy women. It was proposed that 2D:4D may be a useful biomarker for predisposition to MI in Greek men, but not in Greek women [22]. Consequently, Ozdogmus et al [23] reported a study of 100 heterosexual male autopsies whose mean age was 21.4 years. They found that the high 2D:4D ratio of right hand was related to the atherosclerotic plaque development of the right coronary artery.

In the previous CAD related studies, relatively young male patients were included [20,23], only patients with myocardial infarction were selected [20,22], and surrogate risk factors for CAD were used [21]. Mean 2D:4D differs across ethnic groups. However, the link between 2D:4D ratio and CAD in the Chinese population has not yet been reported in the literature [24].

The present study is aimed to determine the association of 2D:4D ratio with CAD, and to investigate whether it could be regarded as an indicator to identify CAD in early development.

The present work was designed as a cross-sectional study. We recruited 441 subjects with CAD in each sex from consecutive hospitalized cases in the center of cardiology in our hospitals. The controls consisted of 441 subjects without CAD, but with similar age and basic clinical characteristics in each sex. The patients excluded from the study were as previously reported [13,16,30,31], they included individuals with former hand lesions, infertility, endocrinopathies, chromosomal abnormalities, non-hetrosexuals, left-handers, and those with breast cancer, prostate cancer and other cardiac problems. Written informed consent was obtained and the study was approved by our institutional review board.

CAD was defined by definite myocardial infarction with any degree of stenosis, or >50% stenosis in more than one epicardial branch as revealed by coronary angiography. Subjects without CAD were those without stenosis in any branch. Study interpretation on severity of coronary artery stenosis was conducted by 2 expert readers. Traditional risk factors for CAD such as diabetes mellitus, hypertension, hypercholesterolemia, hypertriglyceridemia and smoking were defined as we previously described [2].

The index finger and ring finger lengths were measured on the palmar surface of hands from the basal crease proximal to the palm to the tip of the finger using vernier calipers measuring to 0.01mm as described by Manning [21].

Data were expressed as mean ± standard deviation. P values of <0.05 was regarded as being statistically significant. Comparison of the variables between groups was carried out using student t test for numerical variables. Cohen's d was used to calculate effect sizes of group differences. ROCs mode were used to detect predicting performance of 2D:4D ratios for CAD. All statistical analysis was conducted using SPSS (Statistical Package for Social Sciences, release 19.0) for Windows.

The difference in 2D:4D ratios

There was no significant difference between each individual's first and second measurements of each digit length (p>0.05). A significant difference of 2D:4D between right and left hand were observed only in men in both control and CAD groups. On the right hand in the control group and on both hands in the CAD group, the 2D:4D ratios were higher in women than in men (all, P < 0.001). In men with CAD, 2D:4D were higher than men in the control group (right hand Cohen's effect size d = 0.91, left hand d = 0.29; both hands, P < 0.001), but this was not observed in women (Table 1).

The correlation between ratios of 2D:4D and age

The ROCs analyzing digit ratio and CAD in male 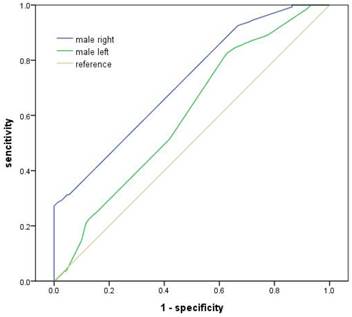 2D:4D ratio in men and women with and without CAD (mean±SD)

The sex difference in the ratio of 2D:4D such that male subjects have lower 2D:4D than female subjects has be widely studied. [25-28] Development biology research has shown that the relative finger lengths are determined by in utero concentrations of sex steroid before birth at around week 13 of gestation, with 2D:4D negatively related to testosterone and positively associated with estrogen. [26,27] Inspired by this phenomenon, Manning et al suggested that 2D:4D may correlate with risk of myocardial infarction (MI). From then on, there have been in total four studies which linked CAD with 2D:4D. [20-23]

The present study shows that the 2D:4D is positively correlated with CAD in men. This is consistent with the findings of Manning and Ozdogmus [20,23] in which a low 2D:4D men tended to have their first MI's later in life than men with high 2D:4D ratios and a higher 2D:4D ratio was significantly related to the incidence of fatty streaks and atherosclerosis calcification of the right coronary artery. Also in accord with Fink and Kyriakidis [21,22] who found a correlation between 2D:4D and neck circumference or MI in men but not in women, we showed that the same correlation between 2D:4D and CAD existed only in men. The ROCs analysis showed that area under the curve of 2D:4D was 0.72 in right hand and 0.60 in left hand in male. This suggested again the discriminating effect of 2D:4D for CAD, especially in male right hand.

As for the sex difference in 2D:4D, Manning et al reported in Europe [21,27] that the mean male 2D:4D ratio was significantly lower than mean female 2D:4D in left-hand and right-hand 2D:4D. In accordance with the data in China [18,29], we found that men showed significantly smaller 2D:4D ratios than women in right and left hands. The ROCs analysis showed that the optimal cutoff point of digit ratio for CAD discrimination in male was 0.9505 in both hands with sensitivity 0f 57.8% and specificity of 68% in right hand, and 50.8% and 58.7% in left hand. In addition, Manning reported that 2D:4D ratio in right hand was lower in males than in females and this was significant for Uygur, Han Chinese and Jamaican samples, with the Oriental Han showing the highest mean 2D:4D, followed by the Caucasian Berbers, Uygurs and Afro-Caribbean individuals [24]. For 2D:4D difference between persons with and without CAD, this study was consistent with work done in Greece, as 2D:4D was higher in men with CAD than men in control group (both hands, P < 0.001), but the trends were not observed in women [22]. Regarding the influence of age on the 2D:4D ratio, our results were in agreement with previous report in different nations, that is the 2D:4D ratio was fixed at birth and showed little change during the life span [12,22].

Although both male and female sex hormones have been well-documented to be able to influence vascular biology and to play an important role in coronary artery disease [3-5,34-37], the steroid theory was not echoed by other studies. Yang found that 2D:4D ratios, measures of masculine characteristics, and salivary testosterone showed no significant associations with one another in both male and female [18]. Hauner detected no relationship between sex hormone concentrations and coronary artery disease assessed by angiography in men [38].

Since the circulation levels of sex hormone are not consistently related with CAD, another possibility was put forward. Alevizaki reported that the length of the poly glutamine stretch of the transactivation domain (CAG repeat) of the androgen receptor inversely affects androgen activity and the shorter CAG repeat of the androgen receptor gene is associated with more severe CAD [39]. Zheng et al [40] showed that the 2D:4D ratio in mice is controlled by the balance of androgen to estrogen signaling during a narrow window of digit development. Androgen receptor activity is higher in digit 4 than in digit 2, and inactivation of androgen receptor decreases growth of digit 4, which causes a higher 2D:4D ratio. These results suggest that the sensitivity to androgens may play an important role in the increased frequency of CAD in males.

It is undoubtedly the case that more studies are needed to elucidate the real causal relationship and the underlining mechanisms between 2D:4D ratios and CAD.

The present findings of positive correlations between 2D:4D ratio and CAD in males suggests that high 2D:4D ratio is predictive of CAD and may be used in diagnosis and in early life-style intervention in Chinese men.

The authors would like to thank Mr. Tianran Wu from Melbourne University of Australia to read through the manuscript and give some valuable suggestions.

5. Lerner DJ, Kannel WB. Patterns of coronary heart disease morbidity and mortality in the sexes: a 26-year follow-up of the Framingham population. Am J Cardiol. 1986;111:383-90

7. Geschwind N, Galaburda AM. Cerebral lateralization biological mechanisms,associations, and pathology: I. A hypothesis and a program for research. Arch Neurol. 1985;42:428-59