Ribavirin is one of the major agents used in combination therapy with interferon for chronic hepatitis C, but is often associated with hemolytic anemia as a serious adverse event. Employing metabolome analysis, we demonstrated that the concentrations of intermediate metabolites produced by glycolysis and the pentose phosphate cycle in patients' erythrocytes were significantly decreased after administration of ribavirin. Our findings suggest that hemolysis associated with ribavirin is triggered by an energy crisis and consequent oxidative stress, thus having implications for the prevention of such hemolysis.

Hepatitis C virus (HCV) is the major causative pathogen of chronic liver diseases with a risk of progression to cirrhosis and hepatocellular carcinoma. Currently, ribavirin is one of the major agents used in combination therapy with interferon for chronic hepatitis C. During this treatment, however, patients sometimes suffer ribavirin-induced hemolytic anemia as an adverse event, necessitating discontinuation of the therapy or reduction of the dosage of anti-viral agents (1, 2).

The mechanism of the hemolysis induced by ribavirin has not been clearly determined, but oxidative stress and subsequent membrane fragility of erythrocytes have been suggested to play an important role (3,4). After administration, ribavirin is converted to its phosphorylated form within the cell using adenosine triphosphate (ATP). However, phosphorylated ribavirin is not converted back to the dephosphorylated form because erythrocytes lack the enzymes necessary for dephosphorylation. Thus, the level of ATP in cells is reduced as a result of ribavirin phosphorylation (4, 5). The metabolic system in erythrocytes consists of glycolysis and the pentose phosphate cycle, for which ATP is essential. The pentose phosphate cycle begins with glucose-6-phosphate (G6P), which is the first intermediate metabolite produced by glycolysis, and thus it interacts with glycolysis closely. It has been hypothesized that deficiency of ATP causes impairment of the glycolytic system, thus triggering an energy crisis within erythrocytes, and inducing oxidative stress, leading to membrane fragility through impairment of the pentose phosphate cycle.

In the present study, to investigate changes in the intermediate metabolites of glycolysis and the pentose phosphate cycle in erythrocytes, we carried out the metabolomics analysis of erythrocytes from patients with chronic hepatitis C, who had received antiviral therapy with pegylated interferon plus ribavirin. It was anticipated that this approach would help to clarify the mechanism responsible for ribavirin-induced hemolysis.

Eight patients with chronic hepatitis C (4 men and 4 women, aged 54.1±11.6 yr, mean±standard deviation) were treated with pegylated interferon plus ribavirin in accordance with the Japanese standard guideline for treatment of chronic hepatitis C (6). Erythrocytes were collected from the patients before and one week after the start of treatment, separated from whole blood by centrifugation, and resuspended in normal saline solution at a concentration of 400×106/μl. For disruption of the erythrocyte membranes, 20 μM methanol solution was added to 40 μl of erythrocyte suspension. The samples were dissolved in 200 μM 3-aminopyrrolidine and trimesate. The levels of intermediate metabolites in erythrocytes were measured by capillary electrophoresis-time-of-flight mass spectrometry (CE-TOFMS) as reported previously (7-9). Informed consent was obtained from all patients, and the study was approved by the institutional ethics committee. Wilcoxon matched-pairs signed rank test was used for statistical analysis, and differences at p < 0.05 were considered to be significant.

Hemolytic anemia induced by ribavirin is one of the serious adverse events associated with therapy for chronic hepatitis C (1, 2). The erythrocyte count observed in this study showed a significant reduction at 2 weeks after the start of ribavirin administration (452.0±43.9×106 /μl vs. 421.7±52.4×106 /μl : pretreatment vs. 2 weeks after treatment, mean±standard deviation, p=0.028). The drop in the erythrocyte count progressed and became 388.1±58.0×106 /μl at 4 weeks after the start of ribavirin administration. Although the mechanism of this hemolysis has not been precisely clarified, a reduction of ATP due to ribavirin phosphorylation has been suggested (10). A recent study showed that ribavirin-induced anemia is primarily due to the effect of the drug on guanosine triphosphate, consequently leading to a reduction of ATP in erythrocytes (11). To clarify this mechanism, we focused on the levels of intermediate metabolites of glycolysis and the pentose phosphate cycle in erythrocytes.

The changes in the levels of intermediate metabolites belonging to the glycolytic system and the pentose phosphate cycle in erythrocytes between samples collected before and after ribavirin administration are shown in Table 1. As ribavirin was taken up by erythrocytes, ATP was consumed for its phosphorylation, and as erythrocytes lack the enzymes necessary for ribavirin dephosphorylation, ATP deficiency progressed and eventually inhibited the glycolytic system. Here we found that the levels of the intermediate metabolites of glycolysis in erythrocytes, including G6P, fructose-6-phosphate, 2, 3-diphosphoglyceric acid and 3-phosphoglyceric acid, were significantly lower one week after ribavirin administration than before the start of treatment. This suggested that the energy metabolism of erythrocytes had been impaired by ribavirin. 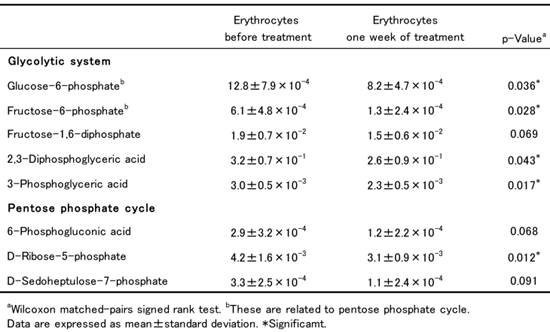 The single nucleotide polymorphisms (SNPs) of inosine triphosphatase (ITPA) gene are shown to be strongly associated with ribavirin-induced hemolytic anemia in chronic hepatitis C (12). Further studies are needed to investigate a relation between SNPs of ITPA gene and levels of intermediate metabolites for glycolytic system and pentose phosphate cycle in a larger cohort of patients. In the treatment of chronic hepatitis C, adequate doses of ribavirin are closely associated with viral clearance, and prevention of both viral breakthrough and emergence of resistant variants (2). For achieving the maximum effect of antiviral therapy, strategies for anemia management during ribavirin administration are essential. The results of this study suggest that some form of medication strategy for both the energy crisis and oxidative stress caused by ribavirin may be important for prevention of erythrocyte hemolysis.