Relationship between Plasma Fibrinogen Levels and Pulmonary Function in the Japanese Population: The Takahata Study

Methods: Totally, 3,257 men and women aged ≥40 years who participated in a community-based annual health checkup in Takahata, Japan, from 2004 to 2006, underwent spirometry, and their plasma fibrinogen levels were determined.

Long-term exposure to cigarette smoke can induce many pulmonary diseases. Chronic obstructive pulmonary disease (COPD) is one of the most common respiratory disorders resulting from habitual smoking (1). COPD is a disorder characterized by chronic inflammation, not only in the respiratory system, but in the entire body, because inflammatory mediators are thought to spillover from the lung(s) into the rest of the body (2). The impact of COPD on the risk of mortality and chronic disability is serious, and preventative measures that can forestall the development of COPD are needed.

Fibrinogen is an essential protein in the clotting cascade (3), and the plasma level of fibrinogen can be altered by various diseases. Furthermore, evidence suggesting that fibrinogen is a regulator of inflammation in disease is increasing (4) and circulating fibrinogen has, in recent studies, been identified as a potential biomarker for COPD (5). However, even though the plasma level of fibrinogen in patients with obstructive ventilatory disorder has been investigated, these levels have not yet been clearly determined in the patients with restrictive pulmonary disease such as pulmonary fibrosis. Intravascular coagulation is thought to be involved in the pathogenesis of idiopathic pulmonary fibrosis (6), and the results of experiments that use gene-targeted animal models suggest that fibrinogen is also involved in the pathogenesis of pulmonary fibrosis (7-9).

This study was part of the Molecular Epidemiological Study of the Regional Characteristics of 21st Century Centers of Excellence (COE) Program and the Global Centers of Excellence Program in Japan (13-19). The Ethics Committee of Yamagata University School of Medicine approved the study, the study was conducted in accordance with the Declaration of Helsinki and all the participants gave written informed consent prior to enrollment.

Data were collected during an annual community health checkup, for which, all residents aged ≥40 years in Takahata town in northern Japan were invited. From 2004 through 2006, 3,520 men (n = 1,579) and women (n = 1,941) were enrolled in the study, and all of them underwent spirometry. We excluded the data of 263 subjects because their spirometry results did not meet the study's specified criteria. Finally, our final sample set comprised the data of 3,257 subjects (1,502 men; 1,755 women) for statistical analysis. Subjects used a self-report questionnaire to document their medical histories, smoking habits, current use of medications, and clinical symptoms. The lifetime consumption of cigarettes was expressed as the Brinkman index (BI; number of cigarettes per day × years of smoking) (16,17).

Blood samples were taken from the antecubital vein of subjects who had been overnight-fasting, and the samples were immediately transferred to chilled tubes. Plasma fibrinogen was measured according to the clotting method. Study subjects were grouped in quartiles based on fibrinogen measurements.

Forced vital capacity (FVC) and forced expiratory volume in 1s (FEV1) were measured using standard techniques, with subjects performing FVC maneuvers on a CHESTAC-25 part II EX instrument (Chest Corp., Tokyo, Japan), according to the guidelines of the Japanese Respiratory Society (JRS) (20). Data were expressed as a percentage of predicted values or as a ratio (%FVC, %FEV1 and FEV1/FVC) (17). Administration of bronchodilators was not allowed prior to spirometry. For each subject, the highest value from at least 3 FVC maneuvers was used in our analysis. The results were assessed by 2 pulmonary physicians, who visually inspected the flow-volume curves and excluded subjects with inadequate data, as defined by the JRS criteria (20). Subjects' pulmonary functions were classified as follows: normal, %FVC ≥ 80% and FEV1/FVC ≥ 0.7; restrictive, %FVC < 80% and FEV1/FVC ≥ 0.7; obstructive, %FVC ≥ 80% and FEV1/FVC < 0.7; and mixed disorder, %FVC < 80% and FEV1/FVC < 0.7.

Median (inter-quartile range) of the plasma fibrinogen level was 325 mg/dL (283-378 mg/dL) in men and 320 mg/dL (range, 287-371 mg/dL) in women. Table 1 shows the characteristics of subjects according to quartiles of fibrinogen. In both men and women, the mean age increased in accordance with the quartile increase in fibrinogen. The mean body mass index (BMI) of men decreased in the highest quartile, while the mean BMI of women increased in accordance with the quartile increase in fibrinogen. Compared with the lowest quartile, the BI of men increased in the highest quartile in men. Percentages of current smoker were not significantly different among these quartiles both men and women. Because the smoking rate in the Japanese population in 2005 was approximately 39.3% among males and 11.3% among females, the smoking rate in this study population seems to be lower than those of Japanese general population (21). In men, the %FVC did not differ between the fibrinogen quartile ranges, but the %FEV1 and FEV1/FVC decreased in accordance with an increase in fibrinogen quartiles. In women, the %FVC and %FEV1 decreased in the highest quartile when compared with the values recorded for the third quartile, while the FEV1/FVC did not differ among fibrinogen quartiles.

Characteristics of the subjects according to the quartile range of fibrinogen.

Values are means (SD) or percentage. Differences among each quartile were evaluated by one-way analysis of variance followed by Tukey's method or chi-square test. 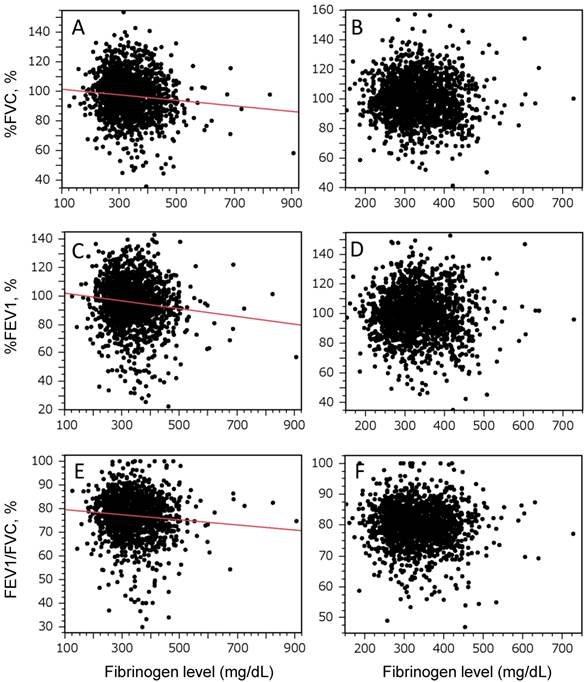 Mean fibrinogen concentration relative to the type of spirometric disorder

Fibrinogen concentrations were not available in 383 men and 387 women.

Values are presented as mean (SD) or percentage. Differences among each group were evaluated by one-way analysis of variance followed by Tukey's method or chi-square test.

In restrictive ventilatory disorders, %FEV1 is known to be decreased, and in an effort to avoid any potential effects of lung restriction on %FEV1, we performed a multiple linear regression analysis in which the data from male subjects with pure restrictive disorder were excluded. In that analysis, fibrinogen was still predictive for %FEV1 (Table 3C).

Unlike previous reports (10), we could not show that baseline plasma fibrinogen levels are predictive of an annual decline in pulmonary functions in men (data not shown). We do not know the precise reason for this difference, and we speculate that it could be related to ethical differences or a lack of statistical power related to the number of male subjects in the second spirometry follow-up of the study (n = 147) (16). Further studies may be required to ascertain whether plasma fibrinogen levels could be predictive of pulmonary function decline in Japanese individuals.

Fibrinogen is an acute phase protein in plasma, which converts thrombin into fibrin in the blood coagulation cascade (26). A study that investigated single nucleotide polymorphisms (SNPs) of the fibrinogen beta chain-coding gene failed to demonstrate an association between SNPs or related phenotypes and the risk of COPD (27). In addition, a genome-wide study with COPD patients reported that SNPs of fibrinogen-related genes are not associated with the development of COPD (28-34). Therefore, elevated levels of fibrinogen in the subjects with impaired pulmonary function are likely a reflection of disease status rather than a causal factor. It is known that plasma levels of fibrinogen are elevated in inflammatory diseases (35,36), and COPD is well recognized as a disease of systemic, chronic, and low-grade inflammation because inflammatory mediators spill over from the lungs into circulation (2). Therefore, many of our study subjects with airflow limitations may well have had systemic, chronic, and low-grade inflammation. This inflammatory response likely resulted from the activation of the same inflammatory pathways that are activated in COPD and the direct toxic effect of cigarette smoking. This, in turn, could explain the elevation of plasma fibrinogen levels in our male subjects. The plasma fibrinogen levels in patients with exacerbated COPD were significantly higher than in those with stable COPD, and plasma fibrinogen levels could thus serve as a useful biomarker for the evaluation of exacerbated COPD (37).

The present study had several limitations, mainly because it was not a hospital-based study. Further, the lack of information regarding chest radiography findings, the final diagnosis, and consumed medication, which could have affected fibrinogen levels, might be potential limitations. Additionally, there is a possibility of sampling bias, because subjects could have participated in the present study because of their socioeconomic circumstances.

This study was supported by a grant-in-aid from the Global COE Program of the Japan Society for the Promotion of Science, and grants-in-aid for Scientific Research from the Ministry of Education, Culture, Sports, Science and Technology, Japan (19590880, 20590892, and 23390220).

This study was approved by the institutional ethics committee and all participants gave written informed consent.