Adhesion formation is a common complication of abdominal surgery, with approximately 93% of patients developing intra-abdominal adhesions after abdominal surgery [1]. Adhesion formation causes symptomatic complications, such as small bowel obstruction, chronic pelvic pain, and infertility [2]. In addition, 5.7% of all readmissions are directly related to adhesions and 3.8% require further surgery [3], with the difficulty and duration of such surgeries being markedly increased [4,5]. Thus, patient quality of life is significantly affected by adhesion-related problems. The high recurrence rate of small bowel obstruction and the high cost of adhesion-related problems are serious issues [6,7].

Numerous anti-adhesion agents have been developed, but few are commercially available. Furthermore, only a few anti-adhesion agents can be used during laparoscopic surgery. Therefore, we developed a novel powdered anti-adhesion material (novel powder) that can be administered during laparoscopic surgery. Recently, this novel powder was used as a hydrogel glue sealant to prevent alveolar air leakage and as a drug vehicle to prevent graft infection in animal model studies [13,14]. In these studies, the novel powder showed good compatibility and did not cause severe inflammation that can lead to adhesion formation. Aldehyde dextrans are often used as crosslinkers in hydrogels, and their cytotoxicities are as low as 1/1000 of the cytotoxicities of formaldehyde and glutaraldehyde. ε-Poly(L-lysine) is used as a food additive and its cytotoxicity is extremely low [15]. We newly developed an anti-adhesion material by changing the proportion rate of the aldehyde group of this material to control the degradation speed and make it suitable for an anti-adhesive function. We also changed the gel to a powder for administration under laparoscopic surgery. In this study, we investigated the anti-adhesive effects of our novel powder, in comparison with other commercially available anti-adhesion materials.

The novel powder is composed of a Schiff base formation of aldehyde dextran and ε-poly(L-lysine) [14,15]. Briefly, 20 g of dextran (70 kDa; Meiyo Sangyo Co., Ltd., Aichi, Japan) was dissolved in 80 ml of distilled water. Two grams of sodium periodate dissolved in 40 ml of water was then added to the dextran solution. Oxidation was allowed to proceed at 50°C for 1 h, followed by dialysis and air-drying. Next, 0.5 g of succinic anhydride was added to 20 g of aqueous ε-poly(L-lysine) (25 w/w%, 4 kDa; Chisso Corp., Tokyo, Japan) and stirred at 50°C for 1 h to induce acylation. During the process of air-drying and crushing, ε-poly(L-lysine) was recovered with 12 mol% of its amino groups acylated. Nine grams of aldehyde dextran (-CHO content=0.23/sugar unit) and 1.0 g of ε-poly(L-lysine) powder were then mixed and crushed into a fine powder composed of granules of <0.1 mm. This powder could be immediately gelled by addition of water, requiring approximately 1 week to hydrolyze and degrade completely in vitro. The powder was administered via an application device made of glass and a rubber bulb (Fig. 1).

Seprafilm® (Genzyme Corporation, Cambridge, MA) and Interceed® (Ethicon, Inc., Somerville, NJ) were also used in this study for comparisons of the anti-adhesive effects.

Device used for application of the novel biodegradable powder. 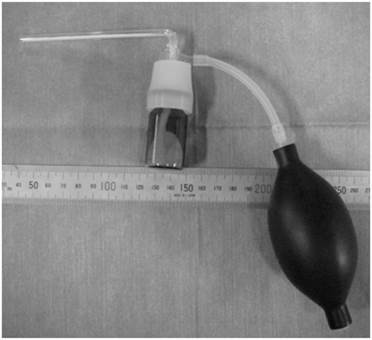 Male Sprague-Dawley rats (Kyudo Corporation, Kumamoto, Japan) weighing 276-486 g and aged 8-12 weeks were used in this study. The animals were kept under standard conditions, fed standard rat food, and given tap water ad libitum. The Nagasaki University Graduate School of Biochemical Sciences Animal Experimentation Committee approved the experiments and all procedures were performed in accordance with the Animal Care Guidelines of the National Institutes of Health.

After inhalation of diethyl ether, the animals were anesthetized by intraperitoneal administration of 50 mg/kg pentobarbital sodium. Abdominal wall resection and cecal abrasion were performed as described elsewhere [16,17]. Briefly, the animals underwent a 5.0-cm midline incision under sterile conditions. A 2.5×2.0-cm segment of the parietal peritoneum directly anterior to the cecum was excised sharply from the abdominal wall, including a superficial layer of the underlying muscle, at 1 cm lateral to the midline incision (Fig. 2A). The epigastric artery and vein were electrocauterized to minimize hemorrhaging. The defect was then abraded by 20 strokes of a toothbrush. The cecum was also abraded by 20 strokes of a toothbrush, such that a homogeneous surface of petechial hemorrhage was created (Fig. 2B). After the cecum was returned to the abdomen, the midline incision was closed in two layers with 5-0 vicryl and 5-0 nylon.

Since many previous reports have chosen days 7 and 28 to evaluate the behaviors of anti-adhesion materials in the abdominal cavity and during the wound healing process of a damaged area [18-21], the animals were euthanized on days 7 and 28 after surgery to evaluate the adhesion severity, adhesion area, and gross and pathological appearances.

After evaluations of the adhesion severity and adhesion area for each anti-adhesion material on days 7 and 28, abdominal wall defect areas with no adhesions were excised and immersed in 10% formalin. Hematoxylin-eosin and Masson-trichrome staining were performed to evaluate the regeneration of the peritoneum and the foreign body reactions to the anti-adhesion materials. 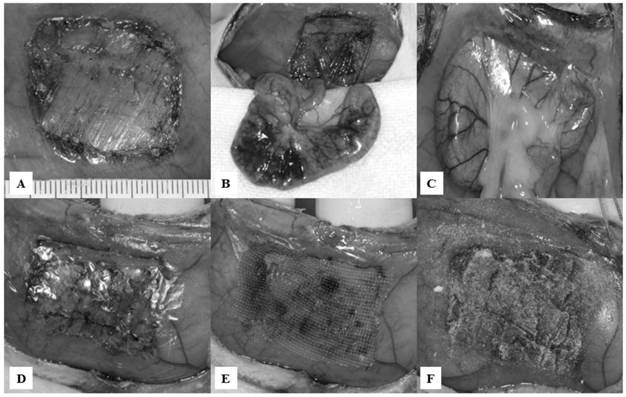 StatView for Windows (SAS Institute, Cary, NC) and Microsoft Office Excel 2010 (Microsoft Corporation, Redmont, WA) were used for statistical analyses. The Kruskal-Wallis rank test and post-hoc comparisons (Scheffe and Steel-Dwass) were performed to compare the different treatments and determine p-values for differences in the data. Values of p<0.05 were considered to indicate statistical significance.

There was no mortality caused by the anti-adhesion materials and none of the animals showed weight loss after the day of the initial surgery. 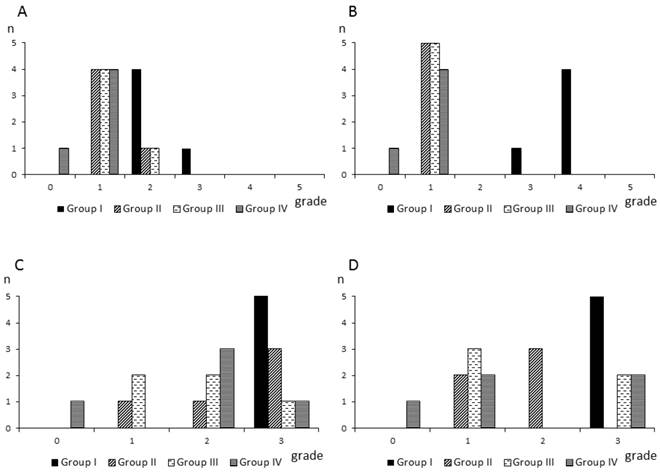 In the non-adhesion areas of the abraded cecum, we did not observe any changes in the gross appearance compared with the non-abraded cecum near the abraded cecum sites on either day 7 or day 28. A pathological study revealed that the mesothelial cells composing the cecal serosa had fully regenerated. There were no differences among the anti-adhesion materials. 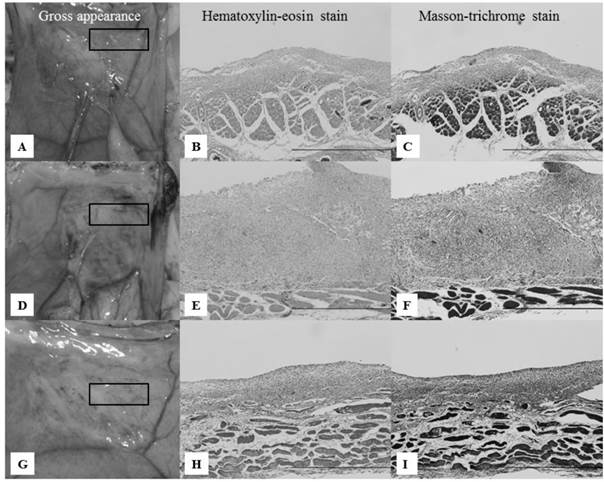 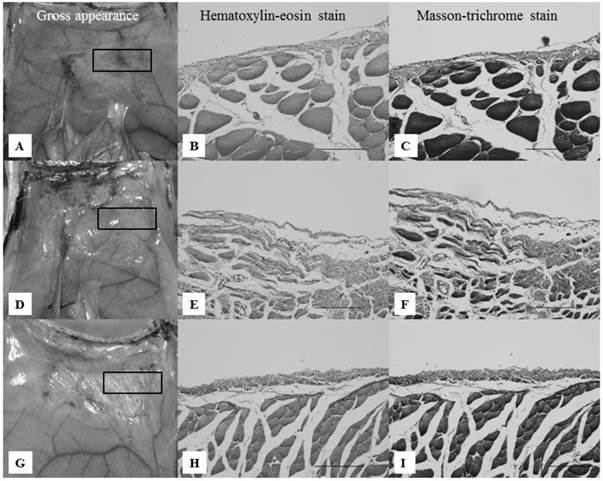 Research to date has confirmed three main methods for preventing the formation of postoperative adhesions [10]: reduction of peritoneal trauma by using minimally invasive surgical procedures, such as laparoscopic surgery; prevention of fibrin formation with pharmacological agents, such as heparin or tissue plasminogen activator; and reducing contact between organs and intra-abdominal contents by using biodegradable barriers such as Seprafilm®. Of these approaches, the use of biodegradable barriers is the best studied. However, no single approach has been wholly satisfactory in reducing adhesions [25].

Seprafilm® has been associated with anastomotic leakage [26,27]. Furthermore, Seprafilm® is difficult to place in the peritoneal cavity because the sheets are not deformable and readily become stuck when wet. After these films become stuck in an inappropriate location, they are difficult to move to the correct position. To overcome these issues, surgeons have created unique methods for administering Seprafilm® into the abdominal cavity via a laparoscopic trocar [30-32]. However, these approaches are not addressed in the product labeling, and require much time and effort. Interceed® can be used in laparoscopic surgery, but has reduced anti-adhesive effects in the presence of blood and is easily moved because of its lower adhesive qualities [18]. These weak adhesive qualities may result in Interceed® sheets moving away from the correct location. Adept® can also be used in laparoscopic surgery, but causes abdominal discomfort and abdominal distension as a result of its administration dosage (1,000 ml) [29].

For prevention of adhesion formation in various fields of surgery, a powdered material has two advantages compared with sheet and liquid materials. First, a powder can be administered in both open and laparoscopic surgery settings. Administration of the novel powder via a laparoscopic trocar using longer nozzles would be as simple and accurate as using other laparoscopic forceps. Furthermore, the novel powder can be administered to all regions that can be reached by the nozzles, even in the pelvic cavity. However, further studies are necessary to evaluate laparoscopic devices for powder application. Second, only a minimal dose is necessary, because it is easy to administer the powder locally at the desired site to prevent adhesion formation.

Postoperative adhesion formation has been characterized as an excess fibrin deposition resulting from an imbalance between fibrin deposition and fibrin degradation. The excess fibrin deposition forms a fibrin bridge between injured tissues and neighboring organs. Adhesion formation occurs within the first few days after surgery, with reperitonealization starting at 24 h and finishing at 7-10 days after the initial surgery or injury. Therefore, the ideal anti-adhesion material needs to preserve the structure for 1 week [35]. Seprafilm® and Interceed® are both known to remain at the target site for approximately 1 week. Thus, 1 week for complete hydrolyzation is a practical degradation speed for anti-adhesion materials.

In the present study, multiple layers of inflammatory cells and a few mesothelial cells were observed in all groups on day 7, while the anti-adhesion materials had largely disappeared. On day 28, all groups showed complete regeneration of the mesothelial cells composing the peritoneum. There were no differences in the wound healing process among the commercial anti-adhesion materials and the novel powder. In addition, group I showed strong adhesion severity on day 28, compared with day 7. Since adhesion severity increases gradually after adhesion formation, it is important to prevent the adhesion formation as early as possible [35].

The adhesion model used in this study involves the induction of petechial hemorrhage from the abraded cecum. The fact that the differences among the anti-adhesion materials were not significant with regard to the adhesion scores suggests that hemorrhaging adversely affects Interceed®, as previously reported [18], as well as Seprafilm® and the novel powder. Group III demonstrated thick brownish-red tissue on the abdominal wall defect sites, and a pathological study of this tissue revealed more inflammatory cells compared with the other materials. The brownish-red color was caused by the presence of hemostasis from the abraded cecum [36]. As Interceed® itself is thicker than Seprafilm® and the novel powder, the residuum of Interceed® on day 7 was thicker than those of the other materials. The foreign body response to Interceed® may have been stronger than those to Seprafilm® or the novel powder. This could explain why the layer of inflammatory cells was thicker with Interceed® than with the other anti-adhesion materials. The present results in the abdominal cavity suggest that this variation in the level of inflammatory cells did not have much influence on the adhesion severity.

In conclusion, our novel powder showed equivalent efficacy to other commercially available anti-adhesion materials. Pathologically, it was completely degraded within 1 week. This novel biodegradable powder has the potential to reduce postoperative adhesions, even in laparoscopic surgery.

9. Audebert AJ, Gomel V. Role of microlaparoscopy in the diagnosis of peritoneal and visceral adhesions and in the prevention of bowel injury associated with blind trocar insertion. Fertil Steril. 2000;73:631-5