Hypoxia Enhances Stemness of Cancer Stem Cells in Glioblastoma: An In Vitro Study

Glioma is a major tumor in the central nervous system and accounts for 35-50% of intracranial tumors in adults. In addition, malignant glioma accounts for about 60% of glioma [1]. Currently, surgical intervention is still the major strategy for the treatment of glioma, with adjuvant radiotherapy, chemotherapy and biotherapy. However, the therapeutic efficacy is still unsatisfactory. In Department of Neurosurgery, standard therapy in combination with chemotherapy and/or radiotherapy may achieve a mean survival time of 14.6 months [2].

In recent years, increasing evidence confirms that cancer is a disease with involvement of stem cells. It is the large amount of cancer stem cells (CSCs) that promote growth of cancer and facilitate invasion, recurrence and metastasis of cancers [3]. In the light of the important role of CSCs in occurrence and development of cancers, CSCs may have promise to become an idea target in the treatment of cancers. However, more studies are required to elucidate the growth and differentiation of cancer cells, especially the interaction between cancer cells and microenvironment of cancers.

Hypoxia is an important feature of malignancies including glioma. Previous work focused on the effect of hypoxia on angiogenesis and energy metabolism in cancers, and less attention has been paid to the influence of hypoxia on growth and differentiation of cancer cells, especially the cancer stem cells [4]. On the basis of previous studies, we hypothesized that hypoxia played important roles in regulation of growth and differentiation of CSCs. The present study aimed to investigate the interaction between CSCs and microenvironment in cancers, which may help to understand the mechanism underlying the regulation of differentiation of CSCs. Our findings may be beneficial for identifying factors targeting the hypoxia and CSCs in cancers, which may provide experimental evidence for the targeted therapy of gioblastoma.

Isolation, identification and culture of CSCs

The isolation of CSCs and CD133-positive cancer cells was done with magnetic activated cell positive sorting (MACS) according to previously described [5]. In brief, fresh cancer tissues were obtained and washed. Necrotic tissues and blood were removed. Then, cancer tissues were cut into blocks (1×1×1 mm3) followed by digestion in trypsin and centrifugation. The corresponding cells were harvested and grown in serum free medium containing bFGF and EGF. Then, primary neurospheres were collected and subjected to flow cytometry to collect CD133 positive and CD133 negative cancer cells followed by further culture.

U87 cells were incubated in normoxia or 1% O2. At different time points, cells were collected and subjected to flow cytometry to detect the cell cycle.

MACS is a newly developed method for sorting cells. With this method, marker of target cells binds to the microbeads and these cells were sorted under a magnetic condition. In our previous studies, CD133 positive CSCs and gioblastoma derived endothelial cells were successfully sorted with this method [5,6]. The CD133 microbeads and goat anti-mouse IgG microbeads were purchased from Miltenyi, Germany.

MTT assay was employed to detect the growth of glioma cells and the growth curve was delineated. Logarithmic phase cells were collected, and the concentration of the cell suspension was adjusted to 5000 cells per well (The edge wells of the plate are filled with aseptic PBS buffer). The cells were incubated at 37ºC, 5% CO2 until cells cover the bottom of the well (a flat-bottom 96-well plate), and then the cells were cultured under normoxic or hypoxic conditions. 20 ul of the MTT solution was added to each well (5mg/ml, 0.5%MTT) and the cells were continued to culture for 4h. After the incubation, the supernatant was discarded and 150 ul Dimethyl sulfoxide was added to each well, and the culture plate was shaked at low speed for 10min until crystal dissolved completely. The ELISA reader was used to measure the absorbance at 570nm.

U87 neurospheres in serum free medium were maintained on the polylysine pre-coated coverslips for 2 h followed by staining with GFAP or OCT4 and the subsequent observation under a laser confocal microscope. These cells were positive for GFAP, but negative for OCT4. After incubation of U87 cells in a hypoxic environment for 48, staining of GFAP, OCT4, nestin and SOX2 was done followed by observation under a laser confocal microscope. Cells positive for GFAP reduced, but they were positive for OCT4, nestin and SOX2.

At different time points, the total protein was extracted from U87 cells and then subjected to SDS-PAGE and transferred onto nitrocellulose filter (Bio-Rad). The membrane was blocked in 5% non-fat milk and then incubated with mouse anti-human CA IX, Oct-4, Sox-2 or GFAP polyclonal antibody (Abcam, UK) or mouse anti-human β-actin monoclonal antibody (Sigma). Enhanced chemiluminescence (Pierce, Rockford, IL) was employed for visualization. Total RNA was extracted with Tripure method and real-time quantitative PCR was employed to detect the mRNA expression of OCT-4, SOX-2 and GFAP.

Statistical analysis was done with STATA 12.0. Data were expressed as mean ± standard deviation. Comparisons between two groups were done with t test. A value of P<0.05 was considered statistically significant.

Effect of hypoxia on morphology of glioma cells 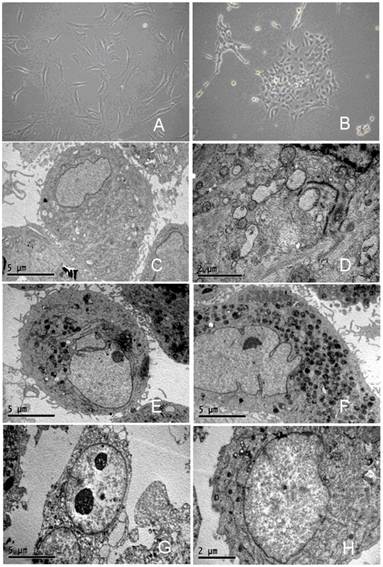 MTT assay was employed to detect the growth of glioma cells and the growth curve was delineated. Figure 2A displayed the growth curve of U87 cells and x02GBM. Results revealed that hypoxia could slightly inhibit the growth of cancer cells without significant difference. Figure 2B displayed the cell cycle. Results indicated that treatment with 1% O2 for 2, 12 and 24 h had no influence on the cell cycle. However, after treatment with 1% O2 for 48, the cells in G0/G1 phase significantly increased when compared with the control group (P<0.05), and those in the G2/M phase markedly reduced (P<0.01). The changes in cell cycle were similar to those above.

Effect of hypoxia on colony forming efficiency of glioma cells

Effect of hypoxia on migration of glioma cells

Effect of hypoxia on markers of CSCs and their differentiation

Effect of hypoxia on CD133 expression

After treatment with 1% O2 for 48 h, CD133 expression was detected. When compared with the control group, hypoxia significantly increased the CD133 expression and the number of CD133 positive cells elevated markedly (Figure 5C). For x01GBM, the proportion of CD133 positive cells was 4.38±0.95 (n=3) in the control group and 15.90±1.38 (n=3) after hypoxic treatment for 48 h showing significant difference between two groups (P<0.01; Figure 5A-C). 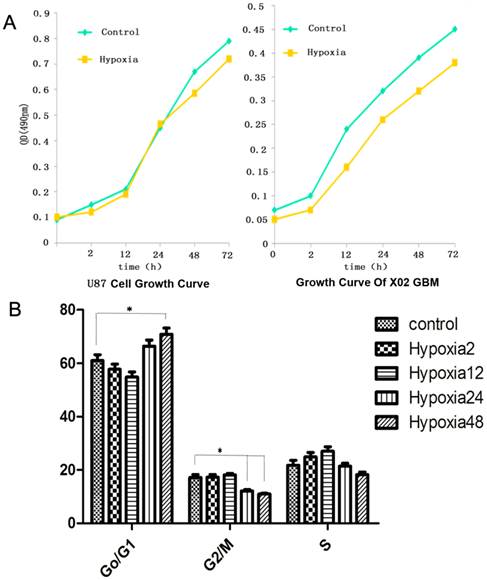 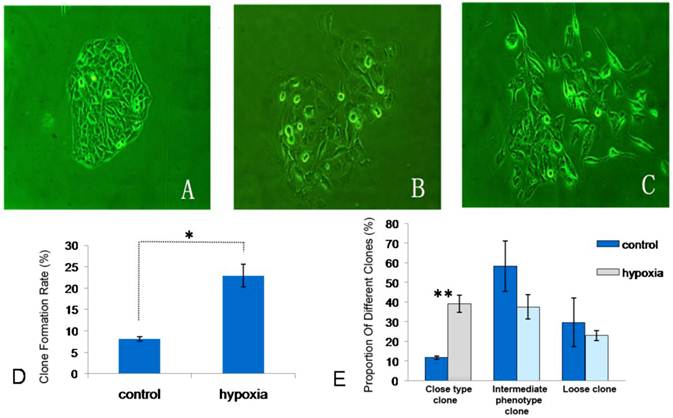 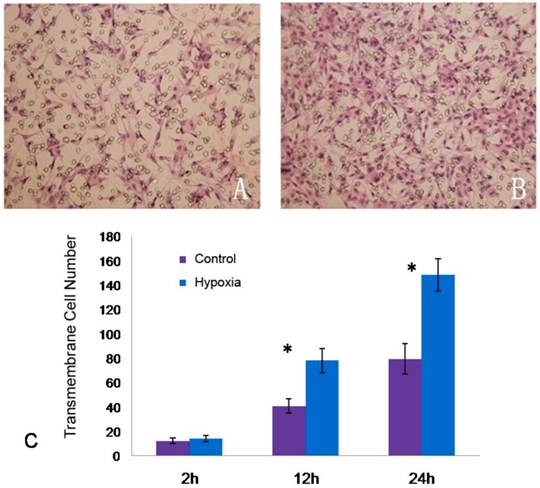 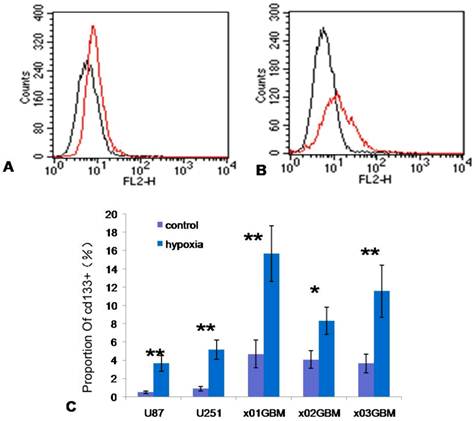 Detection of markers of CSCs and their differentiation by immunofluorescence staining 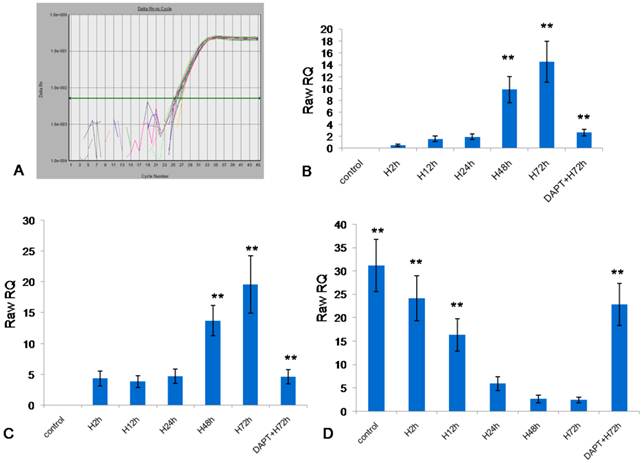 Double immunofluorescence staining showed up-regulation of markers of stem cells (OCT-4, SOX-2) and down-regulation of GFAP in U87 cells. A-D: U87 cells in control group; E-L: U87 cells after hypoxic treatment for 48 h. 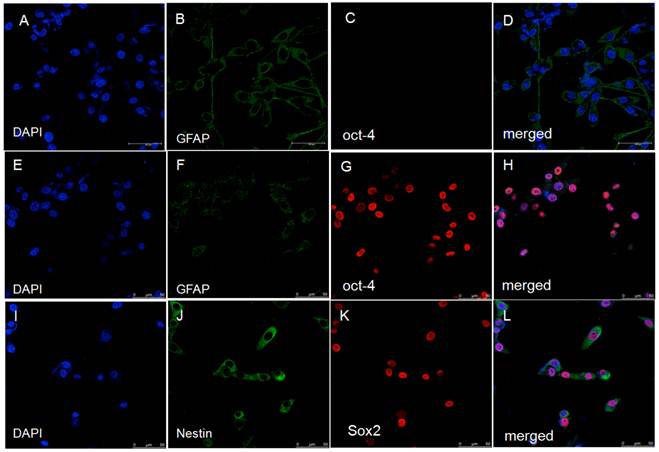 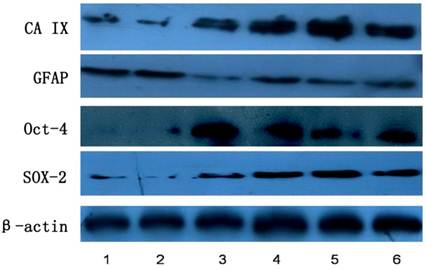 Hypoxia is a common physiological and pathophysiological phenomenon. A series of complicated mechanisms are developed in human body to accommodate hypoxia. For example, glycolysis increases to compensate the energy deficiency due to compromised oxidative phosphorylation under the hypoxic condition [7]; angiogenesis increases under the hypoxic condition to increase the blood vessel density and subsequently elevate the oxygen supply; systemic hypoxia may increase the expression of erythropoietin as a physiological response to accommodate the hypoxic environment. In addition, hypoxia is also a common pathology. For example, hypoxia is a common phenomenon in cancers [8].

Taken together, our findings comprehensively demonstrate that hypoxia elevates the stemness of glioma cells in vitro, but in vivo studies are required and the specific mechanism underlying this effect is still poorly understood. In our future studies, in vivo studies and those on mechanism of this effect will be conducted aiming to identify the target for the treatment of glioma. Currently, the studies on CSCs are still in its infancy stage, and more studies are needed to elucidate the interaction between CSCs and their microenvironment.

The study was supported by National Natural Science Foundation of China (30872649).