The mechanisms involved in diabetic neuropathic pain are complex and involve peripheral and central pathophysiological phenomena. Proinflammatory tumour necrosis factor α (TNF-α) and TNF-α receptor 1, which are markers of inflammation, contribute to neuropathic pain. The purpose of this experimental study was to evaluate the effect of curcumin on diabetic pain in rats. We tested 24 rats with diabetes induced by a single intraperitoneal injection of streptozotocin and 24 healthy control rats. Twelve rats in each group received 60 mg/kg oral curcumin daily for 28 days, and the other 12 received vehicle. On days 7, 14, 21, and 28, we tested mechanical allodynia with von Frey hairs and thermal hyperalgesia with radiant heat. Markers of inflammation in the spinal cord dorsal horn on day 28 were estimated with a commercial assay and Western blot analysis. Compared to control rats, diabetic rats exhibited increased mean plasma glucose concentration, decreased mean body weight, and significant pain hypersensitivity, as evidenced by decreased paw withdrawal threshold to von Frey hairs and decreased paw withdrawal latency to heat. Curcumin significantly attenuated the diabetes-induced allodynia and hyperalgesia and reduced the expression of both TNF-α and TNF-α receptor 1. Curcumin seems to relieve diabetic hyperalgesia, possibly through an inhibitory action on TNF-α and TNF-α receptor 1.

Diabetes mellitus is a chronic metabolic disorder related to insulin deficiency and can involve many organs. Diabetic neuropathy is a common complication that affects sensory neurons, motor neurons, and the autonomic nervous system. Diabetic pain is one of the most common symptoms of diabetic neuropathy and is characterised by spontaneous pain, hyperalgesia, and paraesthesias [1, 2]. The mechanism that underlies diabetic pain is complicated. The pathogenesis of hyperglycaemia-related diabetic neuropathy involves multiple mechanisms, including oxidative and nitrosative stress, activation of nuclear factor-κB (NF-κB), and mitochondrial dysfunction [3-5]. Several lines of clinical and experimental evidence indicate, however, that neuroinflammation is an important factor in the process of central sensitization, which has been associated with the activation of glial cells [6-8]. Various studies have shown that glial cells, particularly microglia, are activated in uncontrolled hyperglycaemic conditions in the spinal cord [9-10]. After undergoing phenotypic changes, activated microglia release various proinflammatory cytokines, including interleukin 1β (IL-1β) and tumour necrosis factor α (TNF-α), which have been implicated directly in the induction of neuropathic pain [9]. Although the role of microglia and their pharmacological modulation are poorly understood, the expression of proinflammatory cytokines in the dorsal horn of the spinal cord is thought to contribute to the pathogenesis of diabetic neuropathy.

Counteracting the proinflammatory effects of microglia-produced cytokines may be one means of treating diabetic neuropathy. Curcumin is a naturally occurring polyphenolic pigment extracted from the Curcuma longa, which has antitumor, antioxidant, and anti-inflammatory properties [11]. What's more, curcumin is well absorbed and has good tissue penetration, including through the blood-brain-barrier [12]. We investigated whether the anti-inflammatory actions of this agent would attenuate hyperalgesia in a diabetic rat model and explored the mechanism or mechanisms involved.

We obtained 48 male Sprague-Dawley rats (200-250 g) from the Experimental Animal Centre of the Fourth Military Medical University. The animals were housed under standard laboratory conditions, were maintained on a 12-h light-dark cycle, and had free access to food and water. The experimental protocols were approved by the Institutional Animal Ethics Committee of the Fourth Military Medical University.

We induced diabetes in 24 rats by administering one dose of streptozotocin prepared in citrate buffer (pH 4.4, 0.1 M). The streptozotocin was injected intraperitoneally at a dose of 65 mg/kg. Twenty-four age-matched control rats were administered an equal volume of citrate buffer vehicle. Forty-eight hours after the injections, we confirmed diabetes by collecting blood samples through the tail vein. Plasma glucose levels were estimated with a commercial blood glucose analyser (Accusoft, Roche Diagnostics, Laval, QC, Canada). Rats with fasting plasma glucose levels higher than 300mg/dL were deemed to be diabetic and were included in the study. Body weight and plasma glucose levels were recorded twice weekly for the duration of the study.

Diabetic and control rats were randomly selected and divided into four groups of 12 animals each. Twelve diabetic rats and 12 control rats received oral curcumin treatment (60 mg/kg) daily from day 3 to day 28. The remaining 12 diabetic rats and 12 control rats were treated with curcumin vehicle (0.5% w/v sodium carboxymethylcellulose) over the same time period. Drug and vehicle were prepared immediately before administration and were delivered in a constant volume of 5 mL/kg body weight.

Paw withdrawal thresholds were measured with the up-down testing paradigm 1 day before injection of streptozotocin or vehicle and on days 7, 14, 21, and 28 after injections. Rats were placed in cages with mesh floors and covered with transparent plastic boxes. They were allowed to acclimatize to their surroundings for a minimum of 20 min in a temperature-controlled room (25ºC) before being tested. Von Frey hairs in log increments of force (0.38, 0.57, 1.23, 1.83, 3.66, 5.93, 9.13, and 13.1 g) were applied for a duration of 4-6 s to the region between the foot pads in the plantar aspect of the hind paw. Abrupt paw withdrawal, licking, and shaking were taken to be positive responses.

To assess nociceptive responses to thermal stimuli, we placed rats in animal holders with gentle restraint and applied radiant heat to the plantar surface of the test paw; a cut-off time of 20 s was used to prevent tissue damage. The thermal withdrawal latency from the radiant heat was recorded with a plantar test (Hargreaves' method) analgesia metre (IITC Life Science, Woodland Hills, CA, USA). Abrupt paw withdrawal, licking, and shaking were taken to be positive responses.

Rats were sacrificed with an overdose of inhalational isoflurane on day 28. The spinal cords were separated quickly and stored at −70ºC until they were ready to be processed for biochemical estimations. The spinal cord lumbosacral enlargement (L5) was homogenized in lysis buffer that contained 50 mM tris(hydroxymethyl)aminomethane (pH 8.0), 150 mM sodium chloride, and 1% 4-nonylphenyl-polyethylene glycol (Nonidet P-40, Sigma-Aldrich, USA). The homogenate was centrifuged at 5000 x g for 15 min at 4ºC for isolation of total supernatant protein. Protein concentration was determined with Pierce BCA Protein Assay Kit (Thermo Scientific Pierce Protein Biology Products, Rockford, IL, USA) according to the instructions of the manufacturer. TNF-α concentration was measured with a rat TNF-α kit (R&D Systems, Minneapolis, MN, USA), and the results were plotted on a standard curve.

We used Western blot analysis to measure expression of TNF-α receptor 1 in the spinal cord dorsal horn samples. The protein extracts were separated on 7.5% polyacrylamide gels by electrophoresis and transferred onto polyvinylidene difluoride membrane. After the membranes were incubated in blocking buffer (5% nonfat milk in Tris-buffered saline with Tween 20 [TBST]) for 1 h at room temperature, they were incubated overnight at 4ºC in the presence of antibody to TNF-α receptor 1 (1:500 in 5% nonfat milk in TBST). Protein weights were measured against Precision Plus protein standards (Bio-Rad, Hercules, CA, USA). After being washed in phosphate-buffered saline with Tween 20, the membrane was incubated with a secondary antibody coupled to horseradish peroxidase (1:2000) for 2 h at room temperature. Proteins were visualized by chemiluminescence with ECL detection reagent (GE Healthcare-Amersham, Pittsburgh, PA, USA). The membranes were reprobed with antibody to β-actin for use as an internal loading control.

All data are presented as mean and standard error of the mean (SEM). Differences between and within groups were compared with one-way analysis of variance (ANOVA). We also used pair-wise comparisons between groups, performed with the Student-Newman-Keuls post hoc test. Statistical significance was set at p < 0.05. All analyses were carried out with SPSS version 13.0 (SPSS Inc., New York, NY, USA).

By day 28, paw withdrawal thresholds to von Frey hair stimulation were significantly lower in diabetic rats than in control rats, indicating the presence of mechanical allodynia. However, allodynia was less in diabetic rats treated with curcumin than in those treated with vehicle. Paw withdrawal thresholds did not differ significantly between the control groups during the entire observation period, irrespective of curcumin treatment (Fig. 1A). 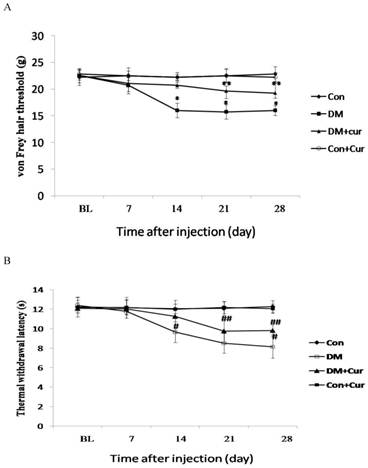 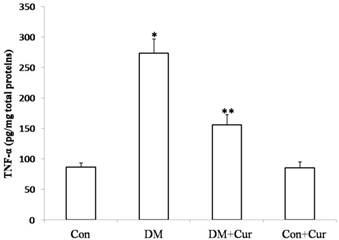 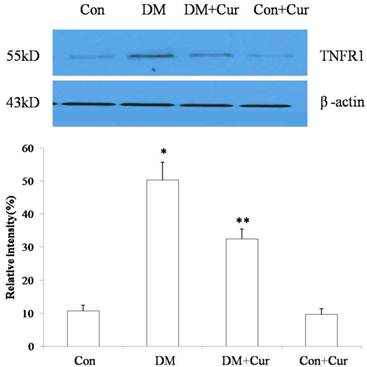 Evidence indicates that hyperglycaemia has toxic effects on neurons because of increased intracellular glucose oxidation, which leads to an increase in production of reactive species [13,14]. TNF-α concentration in spinal cord dorsal horn are elevated in several neuropathological disorders associated with hyperalgesia [15, 16]. In our study, rats with streptocotozin-induced diabetes had significantly elevated blood glucose levels, decreased body weights, and reduced pain threshold compared with control rats. In diabetic rats treated with curcumin pain, the decrease in pain threshold was substantially less than that in diabetic rats treated with vehicle.

Previous preclinical studies have demonstrated an association between elevated TNF-α levels and altered pain behaviour [7, 17]. In the family of proinflammatory cytokines, TNF-α is regarded as a trigger for a cytokine signalling cascade [18]. Interaction between TNF-α and TNF-α receptor 1 leads to the activation of NF-κB, which in turn induces transcription of genes that encode inflammatory and other pain-related mediators, such as TNF-α, interleukin 6, and cyclooxygenase 2[19].

The results of this study indicate that the expression of TNF-α and TNF-α receptor 1 in spinal cord dorsal horn increases in a diabetic rat model. Treatment with curcumin seems to lessen mechanical allodynia and thermal hyperalgesia through downregulation of TNF-α and TNF-α receptor 1 expression. Further investigation is warranted to explore the effects of curcumin on diabetic pain.

The authors declare that there are no conflicts of interest.

22. Sharma S, Chopra K, Kulkarni SK. Effect of insulin and its combination with resveratrol or curcumin in attenuation of diabetic neuropathic pain: participation of nitric oxide and TNF-alpha. Phytother Res. 2007;21:278-283