Objective: To determine the role of laparoscopy in diagnosis and surgical treatment of perforated Meckel's diverticulum (MD) in adults.

Methods: Between July 2003 and July 2011, fifteen patients were seen with perforated MD. Eleven were male and four were female. The median age was 38 years (range, 21-68). All patients presented with a sudden onset of pain. Among them 9 had a past medical history of bloody stools and /or chronic recurrent abdominal pain. 2 were preoperatively diagnosed with perforated MD confirmly and 4 suspiciously, 9 with perforated acute appendicitis. All 15 patients underwent exploratory laparoscopy.

Results: 4 patients with broad-base(≧ 2 cm) and 2 patients with narrow-base(<2 cm) whose perforative site was near the base underwent laparoscopically assisted extracorporal bowel segment resection, the other 9 patients with narrow-base(<2 cm) underwent laparoscopically intraabdominal wedge resection of the MD. No intraoperative or postoperative complications occurred. The median hospital stay was 4 days (range, 2-7days). The histopathologic studies showed heterotopic gastric mucosa (HGM) in 10 cases (66.7%). All patients recovered uneventfully.

Conclusion: To patients with sudden abdomen pain mimic acute appendicitis accompanied by a past medical history of bloody stools and/or chronic recurrent abdominal pain, proferated MD should be kept in mind as a differential diagnosis. Laparoscopy is a safe and effective surgical modality for diagnosis of proferated MD and has a therapeutic role that results in an excellent cosmetic result.

Meckel's diverticulum (MD), first described in 1808, results from failure of complete obliteration of the vitelline duct. It is a common anomaly of the small intestine that occurs in approximately 2% of the population, often found incidentally at the time of abdominal exploration [1,2]. The complications associated with MD include inflammation, perforation, hemorrhage, intussusception, volvulus, intestinal obstruction, and malignant transformation. The total lifetime complication rate has been reported to be around 4% [3,4]. Most patients with MD are asymptomatic, but in those that develop symptoms, it has been estimated that more than 50% are less than 10 years of age [1, 6-7]. Perforation, a rare uncommon complication of MD in adults, is often caused by diverticulitis, which occurs in 12.7% to 30.9% of cases [8]. Perforated MD presents a diagnostic as well as a therapeutic challenge. Conventional diagnostic methods including plain abdominal radiographs, abdominal ultrasound, technetium 99mTc pertechnetate scintigraphy, angiography, and exploratory laparotomy have several limitations [9]. The aim of this study is to review our experience using laparoscopy in the management of perforated MD.

Between July 2003 and July 2011, 15 patients were seen with perforated MD in the Second Hospital of Shandong University. 11 were male and 4 were female. The median age was 38 years (range, 21-68). All patients presented with a sudden onset of peri-umbilical or right lower quadrant pain. Among them 9 had a past medical history of bloody stools and /or chronic recurrent abdominal pain. Physical examination showed abdominal rigidity, guarding to palpation in the peri-umbilical area and right lower quadrant in these 15 patients. On laboratory tests, white blood cell count of all the 15 patients exceed 14.6×109/L with higher neutrophil granulocyte ratio, and 7 of the 9 patients presented with bloody stools showed hypochromic anemia. In all patients with bloody stools and /or chronic recurrent abdominal pain, upper and lower gastrointestinal endoscopy were done in past but failed to find the source of bleeding. A technetium 99mTc pertechnetate scan was performed in five patients with bloody stools, only 2 patients had ectopic uptake in the right lower quadrant. All of the 15 patients underwent ultrosound examnination and 12 showed free fluid and among them 4 with normal appendix ultrasonographic characteristics, 8 of the 15 patients underwent Computed Tomography scan of abdomen and pelvis which showed free fluid.

As to preoperative diagnosis of the 15 patients, 2 were diagnosed with perforated Meckel's diverticulum confirmly and 4 suspiciously, 9 with perforated acute appendicitis. All 15 patients underwent exploratory laparoscopy. General anesthesia was utilized. Pneumoperitoneum was created by open Hasson's technique using a 10-mm port to a pressure of 12 mmHg. Through this port, a 10-mm telescope was used for initial visualization of the whole abdomen. Two 5-mm accessory ports were inserted n the left and right lower abdomen. Our procedure started with complete visualization of the whole abdomen and then identification of the ileocecal segment. The terminal ileum was examined stepwise from ileocecal junction proximally using atraumatic grasping forceps. If an perforated MD with narrow-base(<2 cm, Fig. 1) was identified, a 12-mm trocar was placed through the right accessory port for replacement of the 5-mm one, allowing the right port for the application of Endo Linear cutter stapler (Endo LCS), exteriorization of MD, and extraction of the specimen. Laparoscopically intraabdominal wedge resection of the MD was performed by firing Endo LCS across the bowl wall near the base of MD. To perforated MD with broad-base (≧2 cm, Fig. 2) or perforated-base (Fig. 3), a laparoscopically assisted extracorporal bowel segment resection with end-to-end anastomosis was performed. Before terminating the procedure, the resected diverticulum was opened and carefully inspected for confirmation of complete removal of ectopic gastric mucosa. 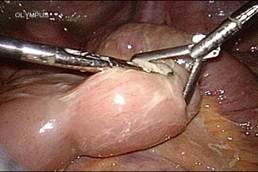 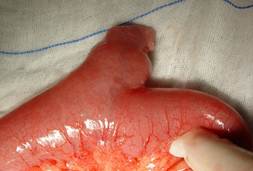 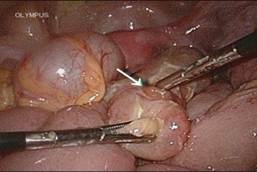 The distance from the diverticulum to the ileocecal valve, in our study, was from 40 to 95cm with the mean of 62cm. All of the diverticula were detected on the antimesenteric border of the ileum. The length and the base diameter was 3.6±1.2cm (range, 3- 8cm) and 1.7±0.9cm (range, 1 to 4cm), respectively. 4 patients with broad-base(≧ 2 cm) and 2 patients with narrow-base(<2 cm) whose perforative site was near the base underwent laparoscopically assisted extracorporal bowel segment resection, the other 9 patients with narrow-base(<2 cm) underwent laparoscopically intraabdominal wedge resection of the MD. The mean operative time for laparoscopic wedge bowel resection of the MD was 52 minutes, whereas the mean operative time for laparoscopically assisted bowel segment resection was 68 minutes. No intraoperative or postoperative complications occurred. The median hospital stay was 4 days (range, 2-7days). The histopathologic studies showed heterotopic gastric mucosa (HGM) in 10 cases (66.7%%) and no pancreatic tissue or colonic mucosa, no ectopic tissues were found in the other 5 patients. All patients recovered uneventfully and were discharged 1 to 2 days after the procedure. All patients remained well at follow-up.

Fewer than 10% of symptomatic MD are diagnosed preoperatively [5]. In general, upper and lower gastrointestinal endoscopy play no role as they are inaccessible to ileum suffering from MD. CT and sonography are usually of little value because distinction between a diverticulum and intestinal loops is usually difficult. Radionuclide scans (99mTc-pertechnetate) may diagnose MD when uptake occurs in ectopic gastric mucosa or by identifying the site of gastrointestinal bleeding. But accuracy, reported to be around 90% in pediatric series [10], drops to only 46% in the adult group [11]. HGM and the posittive 99mTc pertechnetate scan was found in only 10 and 2 (out of 5) patients in our series, respectively. Furthermore, perforated MD often presents as acute abdomen, doctors might not have sufficient time to take various diagnostic measures. The correct diagnosis is usually confirmed by operation. Laparoscopic surgery is propitious to avoid not only negative exploratory laparotomies for patients with false-positive radionuclide scan but also delayed surgical treatments for patients with false-positive scan [12]. Our 15 patients obtained definite diagnosis by diagnostic laparoscopy, and then received timely treatment safely.

Length and width of the diverticulum are also felt to be determinant in symptomatology. Mackey et al found that symptomatic diverticula were more likely to be 2 cm or greater in length [2]. It had been felt that broad-based diverticula were less likely to be symptomatic because of a lower risk of obstruction. Mackey et al did not find any correlation between width and symptomatology [2]. In our series, 11 cases with narrow-base (<2 cm) and the diverticulum,s length of all patients were more than 2 cm with MD diverticulitis, Hence we infer that long diverticula with narrow-base(<2 cm) are more predisposed to perforation.

MD diverticulitis, clinically undistinguishable from acute appendicitis, occurs in about 20% of patients. As in acute appendicitis, diverticular obstruction results in distal inflammation, necrosis, or even perforation, leading to abscess or peritonitis. Ulceration of ectopic gastric tissue, ingestion of foreign bodies, Littre's hernia, tumors such as leiomyosarcoma, lymphatic sarcoma, and poorly differentiated stromal tumor were also pathologies leading to perforation [13]. In our fifteen patients, perforation was secondary to diverticulitis but not other pathologies. Among them 9 had manifestation of bloody stools and /or chronic recurrent abdominal pain in past medical history.

The management of incidental MD remains controversial. Most published reports opponent to incidental diverticulectomy have included only patients undergoing diverticulectomy or bowel resection through laparotomy [14]. Prophylactic diverticulectomy laparoscopically was believed to be a safe procedure in face of potential risk of future complications and the higher morbidity associated with complicated MD [15]. There is general agreement that symptomatic MD should be resected by either open or laparoscopic procedures. As to perforated MD in operation, to survey the small intestine beginning from the ileocecal valve is necessary, especially when the appendix looks normal. Laparoscopic treatment of MD has been increasingly reported with techniques including intraabdominal wedge resection or extracorporeal/intracorporeal bowel segment resection [16]. Compared to conventional open procedures, laparoscopy is a safe diagnostic and the therapeutic tool that can decrease the time spent for diagnosis and theoretically avoids the morbidity and mortality of a delayed diagnosis while keeping costs at a minimum.

The key procedural step in Meckel's diverticulectomy is to achieve complete resection of MD along with the ectopic epithelium and peptic ulcers on the adjacent ileum. Emergency procedures have to be performed for cases with perforated MD and the pathologists may be often absent for frozen section of the specimen to assess the gastric mucosa of the presence of malignancy. HGM cannot reliably be detected intraoperatively, although a mass may be palpated. Certainly, if the diverticulum is associated with hemorrhage from an adjacent ulcer, or if it is broad based, a bowel resection is indicated [21]. Because the presence of functioning HGM is often associated with bleeding, perforation due to acid secretion [22] and even ectopic mucosal tumor [23], It is our contention that re-operation should be done in case of residual functioning HGM. MD is a “hot-spot” where adjusted risk of cancer was at least 70 times higher than any other ileal site [24]. Under the condition of Meckel's diverticulum cancer (MDC) proved by pathologist postoperatively, a second selective operation should be considered according to the type of tumor and the extent of primary resection. For example, simple diverticulectomy is incomplete for MD-associated gastrointestinal stromal tumor (GIST) [13]. In our series, no residual gastric mucosa or MDC was found.

In conclusion, perforated MD often presents as acute abdomen and its preoperative diagnosis is difficult. To patients with sudden abdomen pain mimic acute appendicitis accompanied by a past medical history of bloody stools and/or chronic recurrent abdominal pain, perforated MD should be kept in mind as a differential diagnosis. Exploratory laparoscopy decreases the time spent for diagnosis and theoretically avoids the morbidity and mortality of a delayed diagnosis. Diagnostic laparoscopy has played a keystone in reaching the definite diagnosis, and accordingly, a definite treatment of our 15 patients safely in emergency. We can conclude that laparoscopy is a useful tool in the diagnostic as well as therapeutic treatment of perforated MD in adults.