A Case Report on Eosinophilic Meningitis Caused by Angiostrongylus cantonensis

A previously healthy 24-year-old man presented to our hospital with a headache of three days duration on April 3rd, 2009. The patient was a cooker working in Jilin Province, China. Three days before hospitalization, the patient had a fever (37.5-38ºC), and a continuous headache with nausea but no vomiting. He had no myotonia or convulsion. He was referred to the Neurology Department with a headache of unknown cause and was examined by routine tests. A lumbar puncture revealed an opening pressure of 240 mmH2O. CSF was colorless and transparent and had 730 x 106/L white blood cells, 0.73 g/L protein, 1.80 mM glucose and 125.4 mM chloride. Testing of CSF gave the following results: eosinophils 34%, lymphocytes 60%, and monocytes 6%. Indirect hemagglutination assay with blood serum and CSF was negative. The patient was treated for viral meningitis with anti-viral and anti-inflammatory drugs such as acyclovir and dexamethasone for six days. After the treatment, the patient's headache was relieved and body temperature was normal. He was dismissed from our hospital at his request. He has had no headache or fever since he left the hospital. Upon a follow-up examination on April 16th, 2009, the lumbar puncture showed a pressure of 180 mmH2O. The CSF was colorless and transparent and contained 1520 × 106 white blood cells, 1.26 g/L protein, 1.70 mM glucose, and 124.8 mM chloride. It was also determined that there were 28% eosinophils, 7% lymphocytes and 2% neutrophils. He was then referred to the Neurology Department with a diagnosis of meningitis for the second time.

The patient had worked for two years in a seafood restaurant as a cooker. He liked to eat raw seafood and before becoming ill he frequently ate snail.

The patient had no defect in speech. Binoptic papillas showed clear boundaries. The eye movement was normal in all directions. There was no nystagmus. The patient had no signs of meningeal irritation and no cranial nerve damage. Muscle strength, tonus and sensation were normal. The jerk reflexes of his limbs were symmetrical and pathological reflex was negative.

Multiple lumbar punctures revealed that eosinophil levels were higher than the normal range (up to 34%; see Figure 1), consistent with eosinophilic inflammation. Hematological testing revealed increasing numbers of eosinophils (Table 1). Liver and renal functions were normal. Erythrocyte sedimentation rate was also within the normal range. The patient was negative for the human immunodeficiency virus, syphilis, cysticercosis and stool examination. A head computed tomography (CT) scan did not show any evidence of abnormality. The CSF was negative for acid-fast staining and Indian-ink staining, and did not carry cysticercus or herpes simplex virus antibodies.

Since the patient had intracranial hypertension, we treated him by cerebral dehydration to reduce intracranial pressure. He was also treated with 10 mg/d of dexamethasone (a synthetic glucocorticoid hormone) and fluid infusion. Afterward the number of eosinophils was reduced, shown by hematological testing and examinations of CSF (Table 1). The amount of dexamethasone was gradually decreased. The patient felt better and had no headache, dizziness or fever. He was dismissed from our hospital after 15 days when he was back to normal status.

An image of hematoxylin and eosin staining of the patient's CSF, ×200. 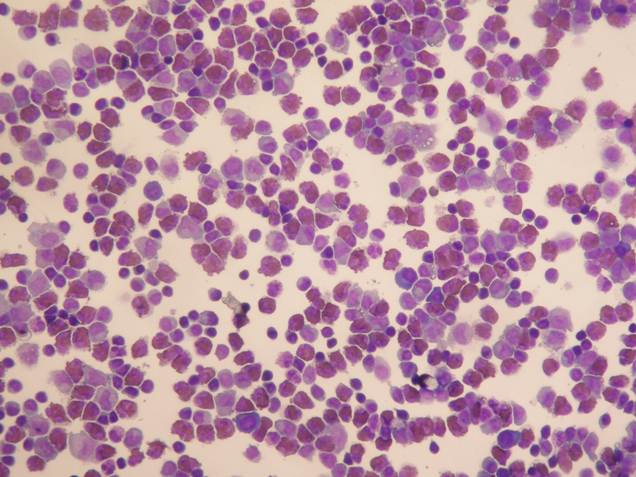 Biochemical and ctylogic analysis of the patient's CSF and Hematological analysis.

The clinical stages of eosinophilic meningitis include a latent stage lasting 3 to 36 d (average 15 d), with no obvious clinical signs. The symptoms of the following prodromal stage are mild, and may include fever, headache, dizziness, abdominalgia, diarrhea and lack of strength. In some patients, the symptoms can resolve without any treatment. At the next, acute stage, patients have severe fever and headache with nausea, vomiting and abnormal sensations of the skin (e.g., numbness, pain, tingling, burning). Some patients have stiff neck, numbness of face or limbs, photophobia and diplopia. Symptoms at the acute stage may last from one week to 2 months or even longer. In the recovery stage, symptoms start to resolve and patients gradually regain normal status. Recovery can last for several weeks, depending on the individual. Some measurements (such as eosinophils counts, CSF pressure, positive head MRI signals and lung shadow) and mildly abnormal sensations could last longer.

Angiostrongyliasis is very rare in northern China2, including Jilin province where our hospital is located. In addition, since the larvae die shortly after they reach the central nervous system, it is very unlikely to find definitive evidence (namely the larvae) in CSF. An immunological diagnosis method has been developed but has not been widely adopted3. Gnathostoma infection is another cause of eosinophilic meningitis4. In Cuba, Ecuador and other countries they are using reibergrams to help as an auxiliary tool in the diagnosis5. Therefore, we had limited experience with this disease. However, the patient was a cooker and he liked to eat raw fish and raw snail, which are potential vectors of A. cantonensis. Based on this and the examinations, we diagnosed that the patient had angiostrongyliasis.

The standard treatment for eosinophilic meningitis caused by A. cantonensis infection has been controversial6. Angiostrongyliasis is usually treated with albendazole. An adrenal cortical hormone combined with dehydration and neurotrophic therapy can also be used. Combined therapy with albendazole and dexamethasone has also been shown to be effective7. Sometimes there was no difference in the duration or severity of illness in patients treated with analgesics alone, analgesics and glucocorticosteroids, or analgesics and antibiotics8. The patient described here responded well to dexamethasone. We also gave him with dehydration treatment. The patient was completely recovered after 15 days of treatment. In conclusion, we were able to diagnose and successfully treated a patient with eosinophilic meningitis caused by A. cantonensis, based on clinical signs and his eating habits. The management of the patient was effective.

Although A. cantonensis and its vectors are endemic to Southeast Asia and the Pacific Basin, globalization has allowed its spread and more travelers encounter the parasites9. It is not a common disease in North China and it could be that the disease is spreading as it happens in South America5. In order to prevent misdiagnosis, for patients with a high number of eosinophils in blood and CSF, physicians should consider angiostrongyliasis and differentiate it from diseases such as cerebral cysticercosis and tubercular meningitis.