The Relationship between Serum Uric Acid and Spirometric Values in Participants in a Health Check: The Takahata Study

Background: Tissue hypoxia induces the degradation of adenosine triphosphate, resulting in the production of uric acid (UA). Patients with chronic obstructive pulmonary disease (COPD) have been reported to have high serum levels of UA (sUA), compared with control subjects. However, the relationship between sUA levels and spirometric measures has not been investigated in detail in a general population.

Methods: Subjects aged 40 years or older (n = 2,917), who had participated in a community-based annual health check in Takahata, Japan, in 2004 and 2005, were enrolled in the study. These subjects performed spirometry, their blood pressure was measured, and a blood sample was taken.

Conclusion: FVC %predicted and FEV1 %predicted were significantly associated with sUA levels in a general population.

Tissue hypoxia has been reported to induce the degradation of adenosine (3,4). This results in the release of purine intermediates and end products of purine catabolism, such as uric acid (UA) (5). Elevation of serum UA (sUA) levels has been observed in hypoxic subjects, including patients with COPD (6-8). However, sUA levels are also influenced by other clinical factors such as gender, body mass index (BMI), daily intake of alcohol, blood pressure (BP), and renal function, as indicated by serum creatinine (sCr) concentration (9-11).

Garcia-Larsen et al. performed a population-based investigation to examine the relationship between oxidative stress-related biomarkers, oxidant status and asthma and atopy in young adults aged 22-29 years. That study demonstrated that there was no relationship between plasma UA and lung function (12). However, these relationships were only investigated in a population of young adults, and the association between sUA levels and pulmonary function in the general population remains to be elucidated.

In this study, we examined the relationship between spirometric measures and sUA levels in a general population participating in an annual health check in Takahata, Japan.

This study formed part of the Molecular Epidemiological Study, utilizing data from the Regional Characteristics of 21st Century Centers of Excellence (COE) Program and the Global COE Program in Japan. Details of the study methodology have been described elsewhere (2,13). The study was approved by the institutional ethics committee and all participants gave written informed consent.

This study utilized data from a community-based annual health check, in which all inhabitants of Takahata town (population 26,026) in northern Japan, who were aged 40 years or older, were invited to participate. This region has a resident population of 15,222 adults aged 40 years or older (7,109 males and 8,113 females). Since employees in public institutes and many companies are examined annually in the health check program organized by local health centers, they usually do not participate in the health checks organized by local government authorities such as Takahata town. The health checks organized by local government cover farmers, employees in smaller companies, self-employed persons, housewives, and retired persons. Four thousand two hundred and eighty-two adults aged 40 years or older participated in this health check program from June 2004 through November 2005, and 1,380 males and 1,735 females (a total of 3,165 subjects) agreed to be enrolled in the study. Two hundred and forty-eight subjects were excluded from the analysis because of unsatisfactory spirometry data that did not meet the Japanese Respiratory Society (JRS) criteria (14). Data for a total of 2,917 subjects (1,325 males, 1,592 females) was entered into the final statistical analysis (2). This study is a secondary analysis of previously published epidemiological data demonstrating an increased prevalence of airflow limitation among cigarette smokers from the same population (2).

Systolic and diastolic blood pressures (BPs) were measured using a mercury manometer placed on the right arm of subjects who had been resting in the sitting position for at least 5 min before the measurement. Measurements were performed twice, and mean BP was calculated as diastolic BP plus 0.33 x (systolic BP minus diastolic BP) (15). Fasting blood samples were taken from the antecubital vein and the blood was immediately transferred to chilled tubes.

Measurements of PaO2 by arterial blood gas analysis or of oxygen saturation by pulse oximetry were not performed in this health check program. Because this study was performed using data from the health check program, information on chest X-ray findings and the final diagnosis for each subject were not available.

Differences in the characteristics of male and female subjects

Differences in smoking index and ethanol intake between males and females were assessed for statistical significance using the Mann-Whitney U test.

In females, OR and 95% CI for smoking index could not be obtained by the analyses using the computer software. 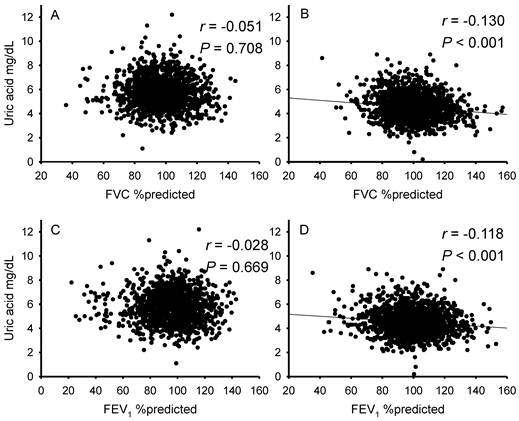 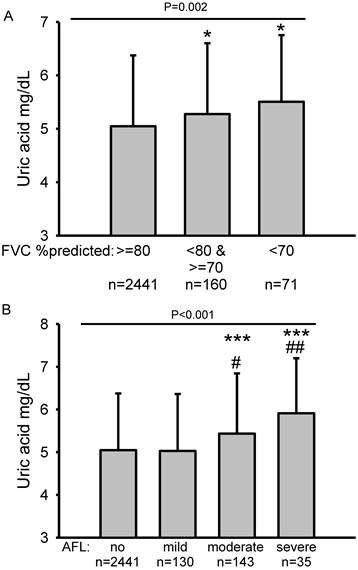 UA is the end-product of purine degradation (16). Excessive intake of foods containing purine bases (17), alcohol consumption (18), renal dysfunction (19), and genetic disorders of purine metabolism, such as hypoxanthine-guanine phosphoribosyltransferase deficiency (Lesch-Nyhan syndrome) (20) and adenine phosphoribosyltransferase deficiency (21), result in elevation of sUA levels. In addition, other demographic and clinical factors, such as gender, BMI, smoking index, BP and serum glucose levels, are known to be associated with serum levels of UA (9-11). Therefore, careful consideration of these factors is required when assessing the relationship between pulmonary function and UA levels.

UA is a biomarker of xanthine oxidase activity, which is known to be an important source of reactive oxygen species (22,23). Several investigators have reported that elevated UA levels were associated with worsening of cardiovascular disease, heart failure and COPD (6,24-26). In Japanese patients receiving home oxygen therapy, mortality was reportedly high among those with high sUA levels (27). In addition, positive associations were demonstrated between UA and inflammatory markers such as C-reactive protein and interleukin-6 (28). These findings suggest that systemic UA levels are associated with oxidative stress and inflammation in vivo. UA activates leukocytes through the NALP3 inflammasome (29). Activated leukocytes express selectins and adhere to endothelial cells, where they secrete various pro-inflammatory cytokines and chemical mediators, resulting in vessel wall damage and atherosclerosis.

In contrast to these cytotoxic properties, UA is known to be involved in the elimination of reactive oxygen species (ROS) (30,31). Therefore, UA appears to function as a double-edged sword in vivo. While UA is a pro-inflammatory molecule for endothelial cells, it functions as a powerful antioxidant in the upper airways (32). Indeed, patients with hypouricemia due to a genetic disorder affecting uric acid transporter 1 sometimes experience acute renal failure after strenuous exercise (33). The mechanism of renal dysfunction after exercise is thought to involve a reduced capacity for eliminating ROS (34,35). Therefore, the roles of UA in vivo are not simple due to this dual function. The crystalline form of UA is reported to be a strong inducer of inflammation, and hyperuricemia contributes to the formation of UA crystals (29). Thus, there may be optimal levels of UA to ensure homeostasis of ROS levels in mammalian tissues.

First, UA levels have been shown to be increased in hypoxic states. Elsayed et al. demonstrated that experimentally-induced hypoxia resulted in substantially higher UA concentrations in lung perfusate and lung tissues of animals, as compared with either normoxia or hyperoxia (5). Therefore, it has been suggested that pulmonary hypoxia promotes purine catabolism, leading to increased production of UA. Unfortunately, measurements of PaO2 or oxygen saturation were not performed in the health check program, and this was not a hospital-based clinical research study. Although the lack of this data is a limitation of the present study, multiple linear regression analysis revealed that pulmonary function was a significant determinant of serum UA levels, independently of age, gender, BMI, smoking index, alcohol consumption, BP, glucose levels, and renal function. However, it is still open to question whether low grade hypoxia, as observed in a general population, can affect serum UA levels, because in this study, the percentage of subjects with severe impairment of pulmonary function was not high.

Third, cigarette smoke is an important risk factor for many lung diseases, including COPD and pulmonary fibrosis. As cigarette smoke contains many toxic and highly oxidative compounds, oxidative stress is increased in the alveolar spaces of the lungs of smokers, due to the formation of ROS such as superoxide anion and hydrogen peroxide by alveolar macrophages (38-40). This oxidative stress induces lung inflammation, and eventually causes remodeling of the airways as a result of tissue damage. Chronic pulmonary inflammation and elevated oxidative stress in the alveolar spaces contribute to the pathogenesis of chronic respiratory diseases, such as COPD and pulmonary fibrosis, and cause chronic damage to the lung structure. sUA levels may be elevated according to the severity of tissue damage, as has been observed in tumor lysis syndrome (41). Therefore, in subjects with high levels of lung oxidative stress and inflammation, circulating UA levels may be elevated as a result of lung tissue damage.

Fourth, accumulating evidence suggests that hyperuricemia is a risk factor for cardiovascular disease (24,25). Hyperuricemia results in the production of UA crystals that precipitate in the joints and kidney tissues. Despite its anti-oxidative characteristics, UA activates leukocytes through the NALP3 inflammasome (29). Subsequently, activated leukocytes cause damage to vascular endothelial cells. As demonstrated by other investigators, as well as our studies, pulmonary endothelial dysfunction is involved in the pathogenesis of COPD (42,43). Therefore, hyperuricemia-induced endothelial dysfunction is possibly associated with impaired pulmonary function in the general population.

Twenty-eight percent of adults aged 40 years or older received health examinations organized by the Takahata local government, and 74% of these subjects were enrolled in this study. However, workers in public institutes and many companies did not participate in this research for the reasons described in the Methods. Differences in employment, socio-economic status or life style between participants and non-participants may result in sampling bias. Unfortunately, personal information regarding employment, annual income or details of life style were not available for these subjects. Therefore, further analyses could not be performed, which was a limitation of the present study.

In conclusion, FVC %predicted and FEV1 %predicted were significantly associated with sUA levels in a general population. Further investigations are required to clarify the mechanisms underlying this association between serum UA levels and pulmonary function.

We thank Taiko Aita and Eiji Tsuchida for their excellent technical assistance.

Funding: This study was supported by a grant-in-aid from the Global COE program of the Japan Society for the Promotion of Science, and grants-in-aid for Scientific Research from the Ministry of Education, Culture, Sports, Science and Technology, Japan (19590880, 20590892, and 23390220).

11. Rathmann W, Haastert B, Icks A. et al. Ten-year change in serum uric acid and its relation to changes in other metabolic risk factors in young black and white adults: The cardia study. Eur J Epidemiol. 2007;22:439-445