Volumetric evaluation of the sphenoid sinus among different races in the Southeast Asian (SEA) population: a computerized tomography study 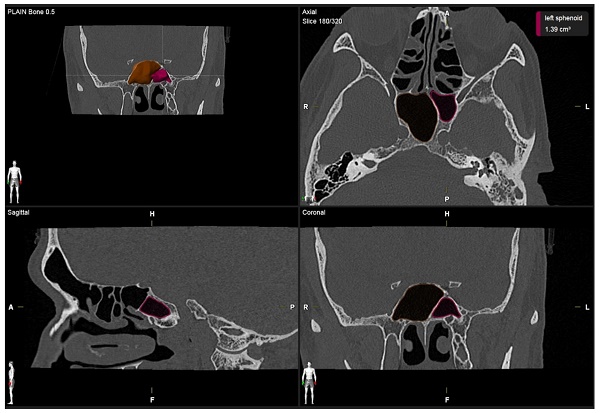 Introduction: The fundament of forensic science lies in identifying a body. The morphological complexity of the paranasal sinus (PNS), which varies greatly amongst individual, possess a discriminatory value that potentially contributes to the radiological identification. The sphenoid bone represents the keystone of the skull and forms part of the cranial vault. It is intimately associated with vital neurovascular structures. The sphenoid sinus, located within the body of the sphenoid bone, has variable morphology. The sphenoid septum's inconsistent position and the degree, as well as the direction disparities of sinus pneumatization, have indeed accorded it a unique structure in providing invaluable information in forensic personnel identification. Additionally, the sphenoid sinus is situated deep within the sphenoid bone. Therefore, it is well protected from traumatic degradation from external causes and can be potentially utilized in forensic studies. The authors aim to study the possibility of variation among the race, and gender in the Southeast Asian (SEA) population, using volumetric measurements of the sphenoid sinus.

Materials and methods: This is a retrospective cross-sectional analysis of computerized tomographic (CT) imaging of the PNS of 304 patients (167 males, 137 females) in a single centre. The volume of the sphenoid sinus was reconstructed and measured using commercial real-time segmentation software.

The sphenoid bone represents the keystone of the skull and forms part of the cranial vault. It is devoid of air at birth, with a gradual formation of the sphenoid sinus postnatally through the invagination of the nasal mucosa into the posterior portion of paired cartilaginous nasal capsule. Pneumatization of the sphenoid sinus then progresses with age in an inferior posterolateral direction with variant degrees and is intimately associated with vital neurovascular structures [1].

The fundament of forensic science lies within the identification of a body. In a well-preserved body or during the early stage of decomposition, Deoxyribonucleic acid (DNA), profiling and fingerprinting have been the primary method to identify the diseased. On the other hand, the study of anthropometric characteristics and anatomical peculiarities plays an indispensable role in more advanced putrefaction stages or when the DNA is severely degraded [2]. The utilization of PNS to identify unknown descendent is well-established in anthropology studies. The morphological complexity of the PNS, which varies greatly amongst individual, possess a discriminatory value that contributes to the radiological identification [3,4].

The analysis with regards to the sphenoid sinus in many studies described variation and highlighted their findings in their respective populations. Most of these results, however, are based on the Western population [6,10-14]. The authors aim to study the possibility of variation among the race, and gender in the SEA population, utilizing a volumetric measurement of the sphenoid sinus.

This study consists of a cross-sectional retrospective evaluation of multiplanar images (three planes: axial, coronal, and sagittal) of all patients who underwent CT PNS at a tertiary referral centre in Malaysia over three years (2016 - 2019). Approval for this study was obtained from the ethical committee of the institute. (UKM PPI/111/8/JEP-2019-734).

A single investigator, an otolaryngologist with more than ten years of clinical experience, performed image segmentation by measuring the volume of the sphenoid sinus. For each patient, the volume of the sphenoid sinus was measured using commercial real-time segmentation software (Elements SmartBrush, Brainlab AG, Munich, Germany) on a personal computer. The software exploits parallel implementation of a sparse field level-set solver on the Graphics Processing Unit (GPU) by implementing the level-set algorithm and has been utilised in various clinical applications such as tumour localisation and estimation of tumour dimensions [15,16]. The segmentation was achieved using a set of Hounsfield units in CT. The anatomical volumetric measurements were performed by means of this software in hand tracing. The lumen of the sinus was delineated. The lumen of the sinus was defined as the space within the bony walls of the sinus in all three planes (axial, coronal, and sagittal) (Figure 1). Within an automatically determined region of interest (ROI), segmentation was conducted by the 3D interpolation of the program itself. The software uses an inverse present method. The program reconstructs a 3D model of the sinus from the DICOM image sequence on which the volume was selected by cutting out the complementary areas of the air-filled area in the three dimensions manually; then, the volume was reconstructed and measured in cubic centimetres (cm3) by the software (Figure 2). Each side of the sphenoid sinus (right and left) were measured separately. The total sphenoid sinus volume was obtained based on the right and left sphenoid sinus volume summation. After 15 days, the measurements were repeated. All information was analysed using Statistical Package for Social Sciences (SPSS) software version 26.0.

Volumetric measurement of the right and left sphenoid sinus. 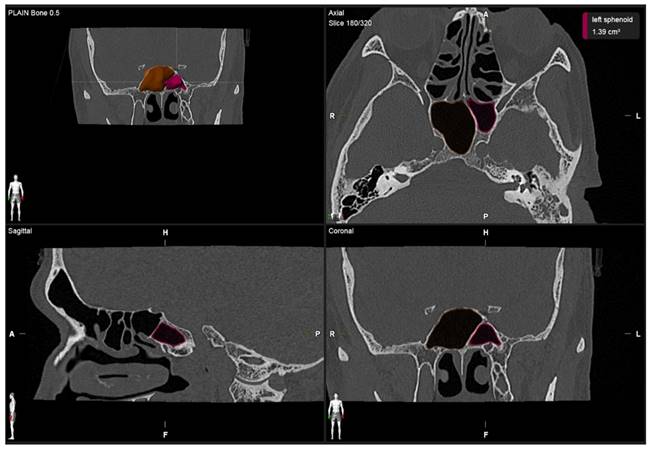 3D reconstruction in the sphenoid sinuses in all planes (sagittal, axial, and coronal). 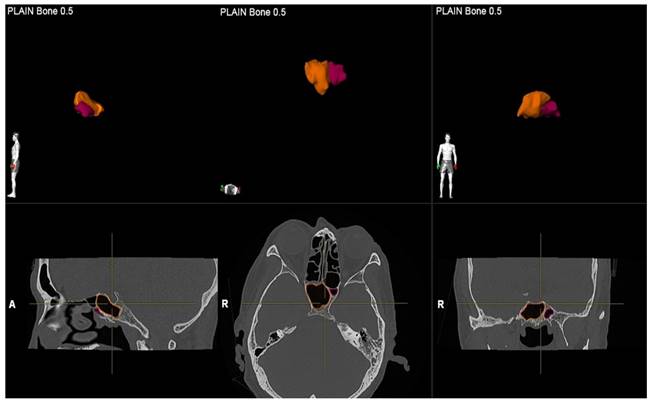 A two-way mixed effect model based on single rating assessed the intra-rater repeatability of the sphenoid sinus volume. Mean estimations along with 95% confidence intervals (CI) was reported for each intraclass correlation coefficients (ICC). 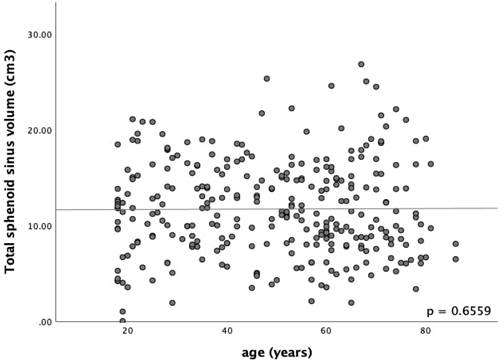 Statistical data analysis was performed with SPSS 26.0 for Windows (SPSS Inc., Chicago, IL). The Shapiro-Wilk Test was used to test the normality. The numeric variables were presented as total numbers (n) and mean ± standard deviation values, whereas number (n) and frequencies (%) were used to present categorical variables. Abnormally distributed data were represented by median and 5th - 95th percentiles range. A two-way mixed effect model based on a single rating assessed the intra-rater repeatability of the sphenoid sinus volume. Mean estimations and 95% confidence intervals (CI) were reported for each intraclass correlation coefficient (ICC). The association of the PNS development between gender and three race cohorts was performed using the Mann-Whitney U test and Kruskal Wallis test, respectively, and the corresponding p values were obtained. The p - value was considered significant when < 0.05. The correlation between sinus volume and age was assessed using Spearman's rank coefficient.

The study of the PNS has become a valuable alternative method cohesively for dependable radiographic studies that promote body identification [2-4]. The sphenoid sinus possesses tremendous morphological variability and degree of pneumatisation. However, less attention was given to the sphenoid sinus in the past due to the poor accessibility to its deep-seated anatomical location. Because of the superimposition of adjacent bony structures, conventional skull radiographies failed to provide an accurate visualisation when compared to the maxillary and frontal sinuses. Such constraint is eliminated with the utilisation of CT, which is today regarded as the gold standard imaging modality to study the PNS. Embryologically, the sphenoid bone is devoid of air at birth and comprises erythropoietic marrow instead. The sphenoid sinus is formed from the invagination or posterior extension of the nasal capsule. Pneumatization only begins in the first year of life and continues until the end of the third decade. It progresses in an inferior posterolateral direction with a variant degree [14,17]. 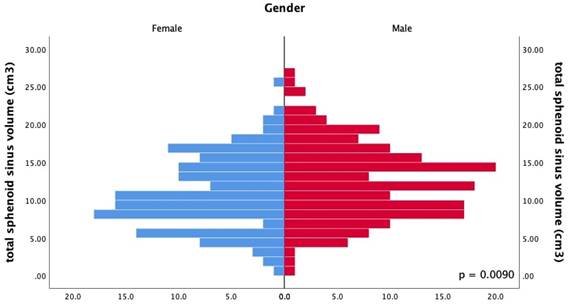 Sphenoid sinus (SS) volume among genders; Mann Whitney U test was performed to investigate the relationship between gender the sphenoid sinus volume 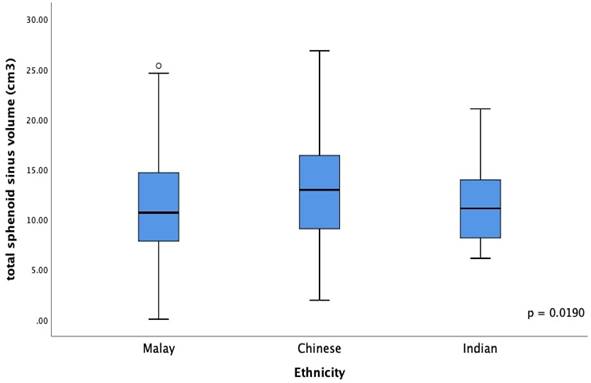 In a study of 214 patients with ages ranging from 1 to 80 years, Yonetsu et al. studied the aeration of sphenoid sinuses of different age groups with CT. They found a reduction of the sinus volume in the late stages of life [18]. Emirzeoglu et al. estimated the volume of paranasal sinuses of 77 adults serologically with CT. He observed a negative correlation between the total volume of all four sinuses and age. However, the correlation did not appear significant with individual sinuses [19]. Cohen et al. found that older patients had a significantly lower volume of maxillary and sphenoid sinuses [20].

On the other hand, Andrianakis A, et al. examined the sphenoid sinus volume and its anatomical variants of pneumatisation by using a sphenoid sinus cast made of Quadro functional hydrophilic addition reaction silicon on 50 elderly human cadavers. They did not find age-related volume degeneration (p = .707) [20]. Similarly, our study did not find any significant correlation between age and sinus volume in adults (cc = - .026, p = .6559). 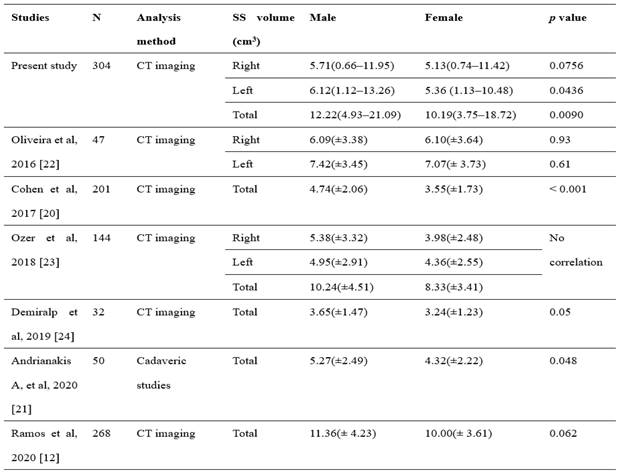 The present study concluded that the sphenoid sinus volume in males was larger than in females, and this difference was statistically significant (p = .0090). It was also shown that race influences sinus volume (p = .0190). No correlation between the age and size of the sinus was identified. The authors ascertained the measurement of sphenoid sinuses volume as a possible adjunctive method in the forensic study. The sphenoid sinus is well protected within the sphenoid body and remains intact, although the skull and other bony structures may be disfigured or severely degraded. The result in gender variation of this study is comparable. Further studies with a larger sample size are needed to ensure the method is conclusive and achieves standardization.

6. Auffret M, Garetier M, Diallo I. et al. Contribution of the computed tomography of the anatomical aspects of the sphenoid sinuses to forensic identification. Journal of neuroradiology. 2016;43(6):404-414

14. Senturk M, Guler I, Azgin I. et al. Sphenoethmoid cell: the battle for places inside of the nose between a posterior ethmoid cell and sphenoid sinus: 3D-volumetric quantification. Curr Med Imaging Rev. 2017;13(4):478-483