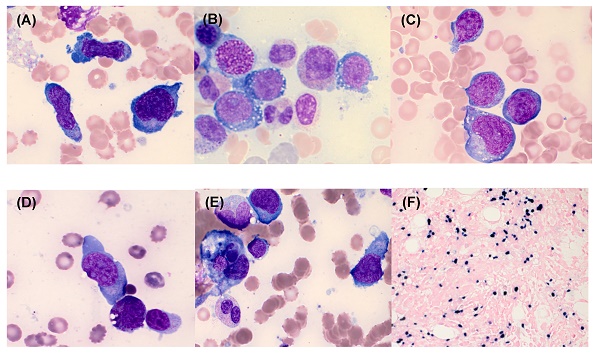 Aggressive natural killer cell leukemia (ANKL) is a rare disease with an aggressive clinical course. We aimed to assess the clinicopathological characteristics of the difficult to diagnose ANKL. During ten years, nine patients with ANKL were diagnosed. All the patients exhibited aggressive clinical course and underwent the BM study to rule out lymphoma and hemophagocytic lymphohistiocytosis (HLH). BM examination showed varying degrees of infiltration of neoplastic cells, which were mainly positive for CD2, CD56, cytoplasmic CD3 and EBV in situ hybridization. Five BM aspirates showed histiocytic proliferation with active heomphagocytosis. Normal or increased NK cell activity test results were obtained from 3 patients who were available for testing. Four had multiple BM studies until diagnosis. An aggressive clinical course and positive EBV in situ hybridization, often with associated secondary HLH, should raise the suspicion of an ANKL. Conducting additional supplementary tests such as NK cell activity and NK cell proportion would be helpful for the diagnosis of ANKL.

Aggressive natural killer cell leukemia (ANKL) is a systemic neoplastic proliferation of NK cells frequently associated with Epstein-Barr virus (EBV) and an aggressive course [1]. ANKL is a rare disease that comprises of <1% of all non-Hodgkin lymphoma [1-3]. ANKL is more prevalent among Eastern Asian populations than other ethnic populations, and develops mainly in the relatively young [4-6]. ANKL has an extremely aggressive clinical course and shows poor prognosis, with less than 2 months of median survival [6, 7]. Early and accurate diagnosis of ANKL is very important because of rapid progression.

The diagnosis of ANKL relies mainly on the integration of clinical features, laboratory findings, the morphologic and immunophenotypic features of neoplastic cells, and demonstration of the clonality of neoplastic NK cells [1,5-9]. Clinically, patients with ANKL present with fever, constitutional symptoms, hepatosplenomegaly, and multiorgan dysfuntions. Cytopenia is common and hemophagocytic syndrome and coagulopathy are often presented. EBV is mostly detected in the neoplastic tissues, and is supportive for the diagnosis of ANKL. Detection of neoplastic NK cells in bone marrow (BM) and peripheral blood (PB) is required for the diagnosis of an ANKL. However, the low number of neoplastic cells at the initial presentation makes it extremely difficult for the correct diagnosis. We aimed to assess the clinicopathological characteristics of ANKL difficult to be diagnosed, by analyzing patients with ANKL in a single center.

The clinical features and laboratory characteristics of the 9 patients with newly diagnosed ANKL are summarized in Table 1. Of the 9 patients, 8 were male the median age was 48 years (range: 23-73). All patients had clinical manifestations accompanied by fever and cytopenia. Most of the patients had anemia (8/9, 89%) and thrombocytopenia (9/9, 100%), while only 3 (33%) patients had leukopenia. All patients underwent BM study to rule out lymphoma (N=5) and haemophagocytic lymphohistiocytosis (HLH) (N=4). Hepatosplenomegaly was detected in 6 (67%) patients. BM examination showed varying degrees of infiltration of neoplastic cells (median, 35.6%; range: 18.4%-70.4%) with varying sizes from small to large (Figure 1). Neoplastic cells were positive for CD56 in all patients (9/9, 100%). They were positive for cytoplasmic CD3 in 4 cases (44%), CD2 in 7 cases (78%), CD7 in 6 cases (67%), CD16 in 4 cases (44%), and all negative for surface CD3, CD4, CD10, CD19, CD20, and CD22. EBER in situ hybridization was positive in 8 (89%) patients (Figure 1F). BM aspirates in 5 (56%) patients showed histiocytic proliferation with active hemophagocytosis. Complex cytogenetic abnormalities were identified in 6 (67%) patients. Among 3 patients wh o underwent NK cell activity test with PB, 1 patient showed normal NK cell activity and the other 2 patients showed increased NK cell activity. Lymphocyte subset test results showed markedly increased NK cell proportions in the PB of patients with ANKL, with an average of 72.2% (range: 55.2%-84.5%). 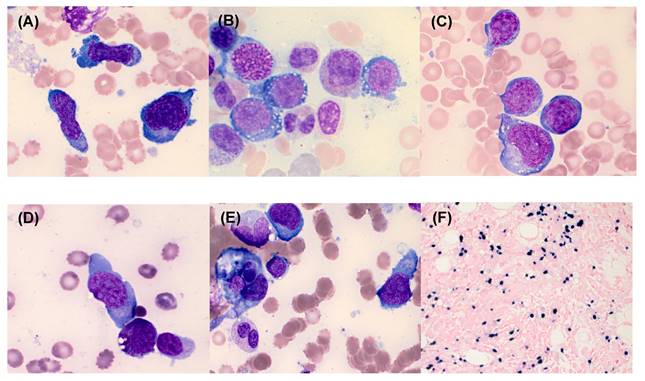 The median survival of the patients was 38 days (range: 1-120). Seven (78%) patients expired and the remaining 2 (22%) patients were lost in follow-up because they were transferred to other hospitals. Patients received a variety of chemotherapy regimens including CHOP-like (containing anthracycline and vincristine) and SMILE (dexamethasone, methotrexate, ifosfamide, L-asparaginase, and etoposide), as determined by the clinician.

ANKL is an uncommon disease that occurs with higher frequency in Asians than in other ethnic groups [4-6], which is likely to be due to both genetic and environmental factors. ANKL is almost always associated with EBV, occurs almost exclusively in younger adults (median age, 39 years) and is slightly more common in males. Accordingly, our study population was also young and had a median age of disease onset of 48 (range: 23-73) and the proportion of male patients was 89%. In our study, the proportion of male patients is higher than that of female patients. However, this result should be interpreted carefully because the number of patients enrolled in this study is small. Age has been proposed as a prognostic factor [10], but it has not been validated [11]. The primary indication for BM study was to rule out lymphoma in 5 patients and HLH in 4 patients, and most of the patients experienced fever, cytopenia, and hepatosplenomegaly. Therefore, when interpreting the BM study of patients with impression of lymphoma or HLH and an aggressive clinical course, the possibility of ANKL should be considered despite its rarity.

It is difficult to distinguish the neoplastic cells of ANKL observed in the BM aspirates from other lymphoid malignant cells solely based on the morphology, because atypical or activated lymphocytes are frequently observed in HLH. Another challenge in the diagnosis of ANKL is the low number of neoplastic cells in the initial BM study [8]. Because ANKL progresses rapidly, numerous neoplastic cells can be observed in follow-up BM studies performed at 1-2 weeks after the initial BM study. In our study, 4 out of 9 patients had undergone multiple BM studies of 2 or more times before the diagnosis of ANKL. In one patient (case 1), there was no definite neoplastic cell infiltration observed in the first BM study, but in the second BM study performed 1 week later, 18.4% of neoplastic cells that were medium to large in size with prominent, multiple nucleoli and abundant basophilic cytoplasm were observed (Figure 2). ANKL is very rare, difficult to be diagnosed, and shows aggressive clinical course. Hence, when ANKL is suspected, it is important that BM study is performed again as early as possible.

The median survival time from ANKL diagnosis was approximately 38 days (range: 1-120 days), and except for 2 patients who were lost to follow-up, all patients expired. Because ANKL progresses rapidly and demonstrates poor prognosis, a fast and accurate diagnosis is most important. An aggressive clinical course and a strongly positive EBV in situ hybridization result, often with associated HLH, should raise the suspicion of ANKL. The immunophenotyping of neoplastic cells is essential, and additionally the NK cell activity test and peripheral NK cell proportion will also be helpful in diagnosing ANKL. For accurate diagnosis, an additional BM study might be necessary, if the patient is suspected to have ANKL based on clinical features, but no neoplastic cells are observed in the first BM study.

Bone marrow (BM) results from a chronic HBV carrier 23-year-old male who was admitted to the Department of Hematology with a history of fever and pancytopenia for few days. In the 1st BM examination, the aspirate was partially hemodiluted and no definite neoplastic lymphoid cells were identified (1st BM aspirate, Wright-Giemsa stain, ×400). The second BM examination was performed after 1 week due to the persistence of fever and pancytopenia, which showed that the aspirate was infiltrated with medium-to-large, primitive-looking lymphoid cells with prominent multiple nucleoli and abundant basophilic cytoplasm that comprised 18.4% among the BM nucleated cells. Some neoplastic cells had intracytoplasmic vacuoles (2nd BM aspirate, Wright-Giemsa stain, ×400).