Hsa_circ_0087302, a circular RNA, affects the progression of osteosarcoma via the Wnt/β-catenin signaling pathway 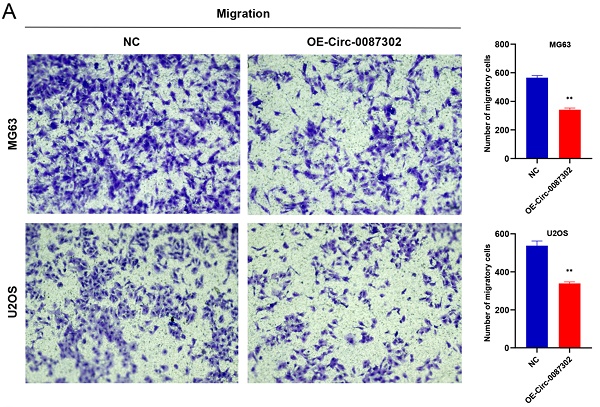 Osteosarcoma is the most common malignant bone tumor in adolescents [1]. According to statistics, the incidence rate of osteosarcoma is three parts per million in China, accounting for 5% [2] of young people's malignant tumors. The incidence rate of osteosarcoma is increasing year by year and is the main cause of cancer death among adolescents. Because of the lack of specific diagnostic markers and detection indicators, approximately 20% of patients have imperceptible micrometastasis at the first diagnosis [3,4]. In recent decades, a comprehensive treatment strategy based on surgery combined with chemotherapy has become the standard treatment for osteosarcoma, and the 5-year survival rate has increased from 70% to 82% [5]. However, surgical resection often affects the motor function of patients and has a high disability rate. Mainstream chemotherapy drugs have large side effects and lack of specificity, resulting in poor treatment effect and prognosis. The high degree of malignancy, metastasis in the early stage and recurrence after treatment are important factors affecting the overall survival of osteosarcoma. Experiments have demonstrated that the development of osteosarcoma is closely related to risk factors, such as age, sex, height and family inheritance [6-8]; however, the exact etiology of osteosarcoma is not clear, and the pathogenesis of osteosarcoma needs to be further clarified. Therefore, for the diagnosis and therapy of osteosarcoma, it is essential to study the molecules related to the pathogenesis of osteosarcoma, identify specific biomarkers and screen clinical early warning and treatment targets.

As an emerging, widespread and evolutionarily conserved non-coding RNA, circular RNA (circRNA) has become a hotspot in life science research in recent years. In 1976, the first circular RNA was found in plant-infected viroid and parainfluenza virus particles [9], and it was later detected in humans and animals [10]. According to the difference of origin, circular RNAs are divided into the following three categories: exon circRNAs (ecRNAs) [11,12], exon-intron circRNAs (elciRNAs) [13] and circular intron RNAs (circRNAs) [14]. Existing studies have shown that circRNA has various biological functions, including acting as a miRNA sponge, acting as a protein sponge, interacting with RNA-binding proteins, selective splicing, transcriptional regulation, encoding proteins and encoding tumor-related functional peptides [15].Among them, the function of circRNA-encoded proteins on the occurrence and development of diseases is controversial, and studies have found emerging functions of circRNA-encoded proteins in human cancers [16]. Circular RNA may be related to the occurrence and progression of many diseases, and it is expected to be a new biomarker of diseases. Recently, a growing amount of evidence has shown that circRNAs play an essential role in the occurrence and development of tumors. Circular RNAs are related to a variety of cancers and diseases, such as laryngeal cancer, colon cancer, lung cancer, liver cancer, renal cancer, cervical cancer, gastric cancer, esophageal cancer, bladder cancer, breast cancer, glioma, leukemia and lymphoma [17-29]. Although an increasing number of circular RNAs have been identified, little is known about the specific mechanism of circular RNA in osteosarcoma. In the present study, we identified a novel circular RNA, namely hsa_circ_0087302, from RNA sequencing data, and we found that it was downregulated in osteosarcoma cells by RT-PCR. Overexpression of hsa_circ_0087302 inhibited cell proliferation, migration and invasion. Through the enrichment analysis of KEGG pathways, we found that hsa_circ_0087302 was closely related to lysine degradation, bacterial invasion of epithelial cells, the ErbB signaling pathway, protein processing in the endoplasmic reticulum, transcriptional misregulation in the cancer pathway and central carbon metabolism in cancer. Cell cycle experiments and Western blot analysis showed that most osteosarcoma cells overexpressing hsa_circ_0087302 were arrested in G0/G1 phase, and hsa_circ_0087302 overexpression affected the expression of cyclin D1, a cycle-associated protein. Because cyclin D1 is the downstream target gene of the Wnt/β-catenin signaling pathway and the Wnt/β-catenin signaling pathway has been confirmed to be involved in the malignant biological behavior of osteosarcoma, we detected the key proteins in the Wnt/β-catenin signaling pathway by Western blot analysis, and we found that overexpression of hsa_circ_0087302 affected their expression level. Thus, hsa_circ_0087302 may affect the biological behavior of osteosarcoma through the Wnt/β-catenin signaling pathway.

The KAPA RNA HyperPrep Kit with RiboErase (HMR) for Illumina® (Kapa Biosystems, Inc., Woburn, MA) was used to remove rRNA, and fragmentation buffer was added to the obtained mRNA to make short fragments. The fragmented mRNA was then used as a template, and six-base random primers (random hexamers) were used to synthesize the first strand of cDNA. To synthesize the second strand of cDNA, buffer, dNTPs, RNase H and DNA polymerase I was added, and it was purified by QiaQuick PCR kit and eluted with EB buffer. End repair was performed, and an adenine base was added. Sequencing adapters were added, and the target size fragments were recovered by agarose gel electrophoresis. A qPCR-based KAPA Biosystems Library Quantification kit (Kapa Biosystems, Inc., Woburn, MA, USA) was used to determine the accurate quantification of the sequencing application. The library preparation work was then completed, and the constructed library was sequenced.

The KEGG pathway enrichment site (http://www.genome.jp/KEGG/) was used to identify the pathway and functional enrichment of the target gene as well as to draw a pathway map.

Construction of overexpression vector and stable transfection of cells

Approximately 2×103 stably transfected osteosarcoma cells were seeded into 96-well plates and allowed to adhere. At five time points (0, 24, 48, 72 and 96 h), 10 µl of CCK-8 solution was added to each well and incubated at 37 °C for two hours. The optical density (OD) value of the sample was measured at 450 nm using a spectrophotometer.

Stably transfected osteosarcoma cells in logarithmic growth were collected. For the migration assays, 100 µl of cell suspension (2×104 cells) in culture medium without FBS was inoculated into the upper chamber (Costar Inc., USA). For the invasion assays, 100 μl of Matrigel (Corning) was added at a concentration of 250 μg/ml to the upper chamber followed by incubation at 37 °C for 1 hour, and the cell suspension (4.0×104 cells) in culture medium without FBS was then added to the upper chamber. To induce cell migration, 500 μl of medium containing 20% FBS was added to the lower chamber. After MG63 and U2OS cells were incubated for 24 hours in the Migration assays and 36 hours in the invasion assays, cells in the upper chamber were wiped with cotton swabs, fixed with methanol for 20 minutes and stained with crystal violet for 30 minutes. Cells were observed and imaged using an inverted microscope (Olympus, Tokyo, Japan).

Stably transfected osteosarcoma cells were cultured in six-well plates in a 37 °C incubator for 48 h. Cells were washed three times with PBS after collection and then incubated in 70% ethanol at 4 °C overnight. After washing the cells with PBS, the cells were centrifuged to obtain pellets. 25 μL of propidium iodide (C1052-2; Beyotime, Shanghai, China) and 10 μL of RNase (C1052-3; Beyotime, China) were added to each sample for staining. After incubation at 37 °C for 30 minutes in the dark, the cell cycle was detected by BD FACSCalibur flow cytometer (FACSCalibur, BD, San Jose, CA, USA).

GraphPad Prism 7 was used for all statistical analyses. The measurement data were evaluated by unpaired Student's t-test and are expressed as the mean ± standard deviation (SD). A P value < 0.05 was considered statistically significant.

Expression of circular RNA in osteosarcoma

In order to study the circRNA expression in osteosarcoma cells, we compared the circRNA expression of osteosarcoma cell lines (HOS, MG63 and U2OS) and normal human osteoblast cell lines (hFOB1.19) by RNA-sequencing analysis. After data screening (fold change ≥ 1.5, P value < 0.05, and FDR < 0.05), there were 29 upregulated circRNAs and 68 downregulated circRNAs in osteosarcoma cells (Figure 1B). A hierarchical cluster diagram was generated for the differentially expressed circRNAs (Figure 1A). KEGG analysis showed that the differentially expressed circRNAs were related to six different signaling pathways, including Lysine degradation, Bacterial inwasion of epithelial cells, ErbB signaling pathway, Protein processing in endoplasmic reticulum, Transcriptional misregulation in cancer and Central carbon metabolism in cancer. (Figure 1C-D). By combining the list of downregulated expression circRNAs in the high-throughput sequencing results with the analysis results of circRNA microarray probe data in circbase database (http://www.circbase.org/), we found that hsa_circ_0087302 is formed from the head and tail of exon 13-16 of its parent gene TLE4, which is located on chromosome 9 (chr9: 82319697-82324614), with a length of 731 BP. The presence and structure of hsa_circ_0087302 was confirmed by primer-specific amplification followed by Sanger sequencing of the PCR product. Therefore, we select hsa_circ_0087302 as the research object of this experiment (Figure 1E). 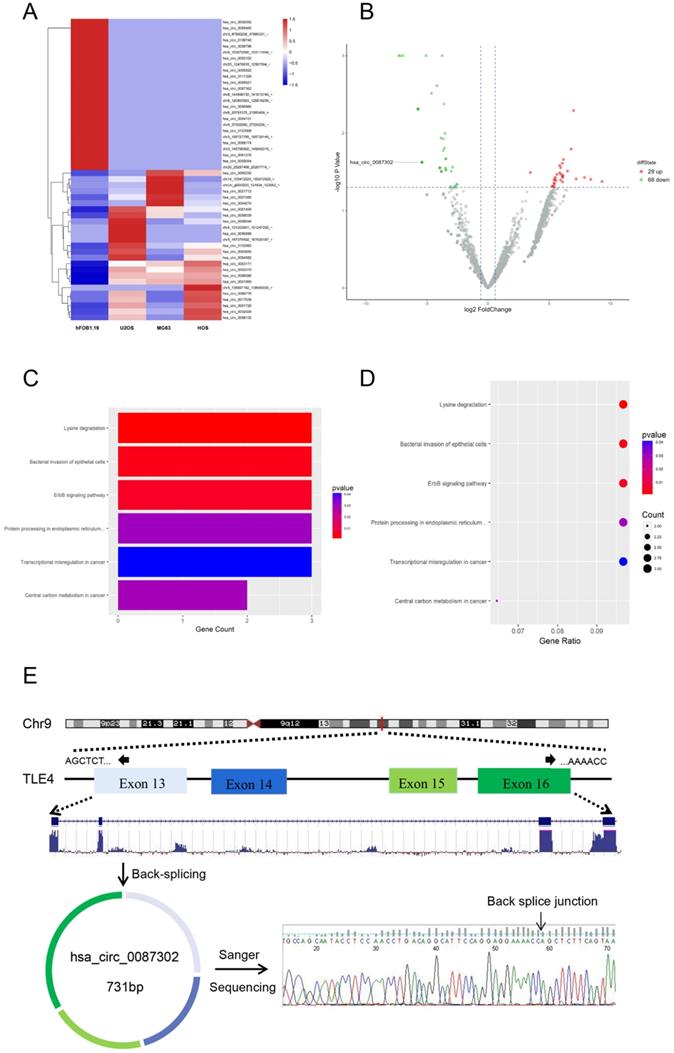 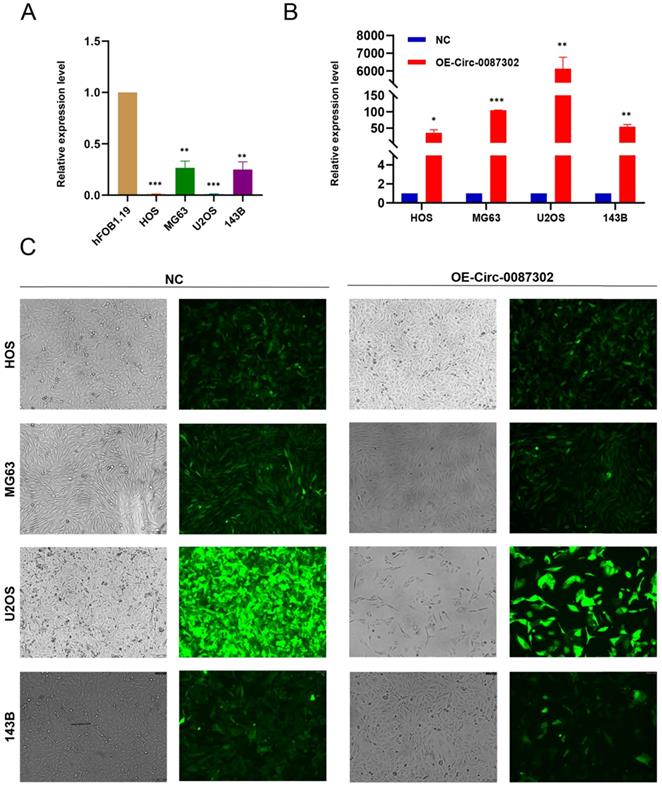 Effects of hsa_circ_0087302 overexpression on the osteosarcoma cell cycle

Effects of hsa_circ_0087302 overexpression on osteosarcoma cell migration and invasion 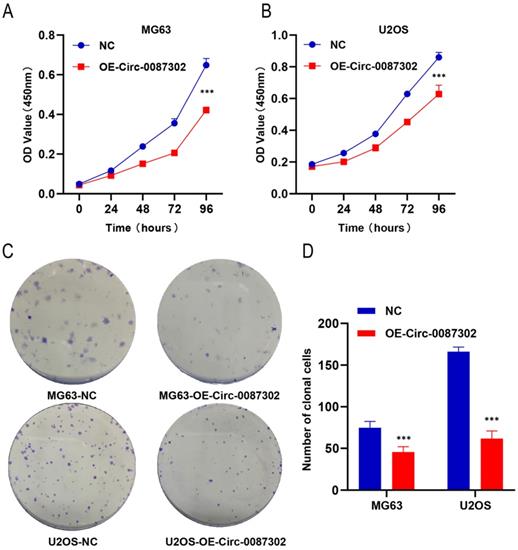 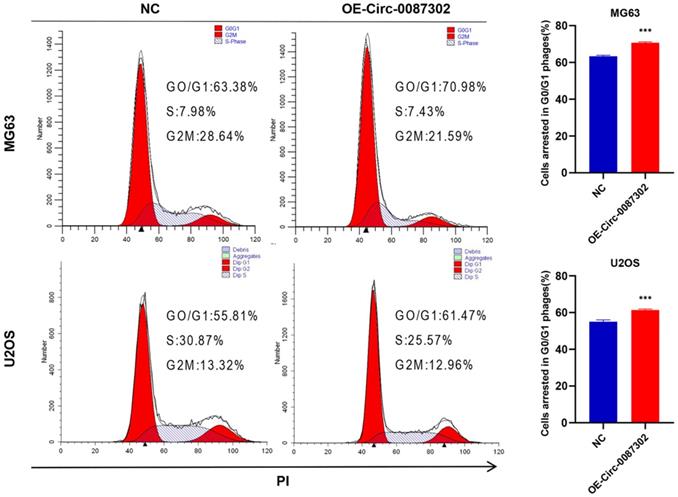 To explore the molecular mechanism of hsa_circ_0087302 on the proliferation, migration and invasion of osteosarcoma cells, according to the results of KEGG database, we detected the key node proteins in Wnt/β-catenin signaling pathway which was closely related to lysine degradation, the results were as expected. We found that the protein levels of β-catenin, cyclin D1, Dvl 2, Dvl 3, CD44, LRP 6, LEF 1, c-Myc and c-Jun decreased but that the protein level of Axin increased with the increase of hsa_circ_0087302 expression (Figure 6A-B). These findings suggested that hsa_circ_0087302 may participate in the biological behavior of osteosarcoma via the Wnt/β-catenin signaling pathway. 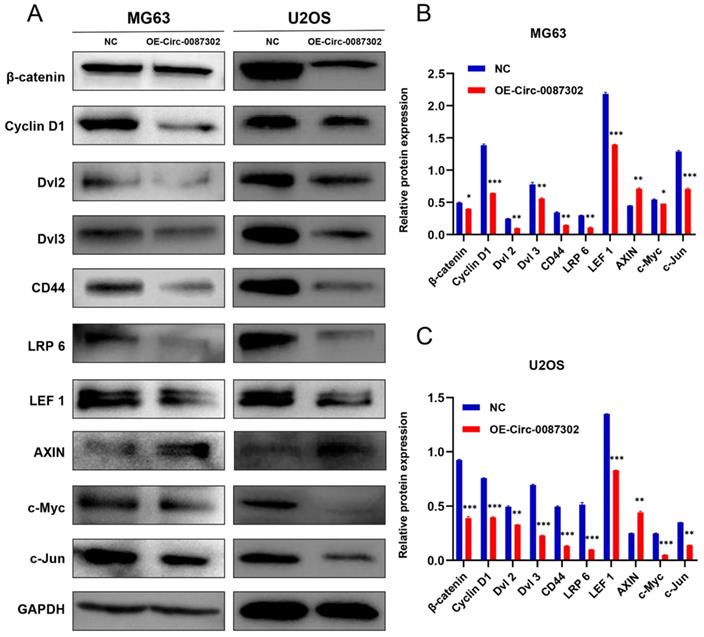