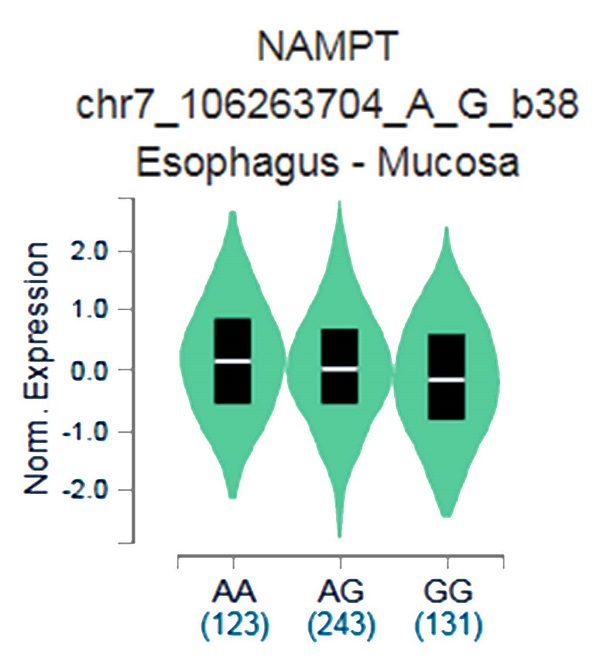 Oral cancer is the eighth greatest generally diagnosed cancer amongst males worldwide and the fourth most generally malignancy amongst Taiwanese males. The pro-inflammatory adipocytokine visfatin promotes tumor growth. Elevated plasma visfatin levels have been identified in patients with oral squamous cell carcinoma (OSCC), although the biological mechanisms underlying the involvement of visfatin in the pathogenesis of OSCC are not well understood. Moreover, no information is available regarding associations between visfatin polymorphisms and carcinogenic lifestyle factors with OSCC. This study, therefore, investigated the effects of four visfatin gene polymorphisms (rs11977021, rs61330082, rs2110385, and rs4730153) and carcinogenic lifestyle factors (betel nut chewing, alcohol consumption and cigarette smoking) on the risk of developing OSCC in 1,275 Taiwanese males with OSCC, and 1,195 healthy males (controls). We also examined the associations between these visfatin genotypes and OSCC histopathological prognostic factors (pathological stage, tumor status, lymph node status, and metastasis). We found that compared with subjects with the CC genotype of SNP rs11977021, those with the CT+TT genotype were less likely to progress OSCC. In addition, an association was found between the rs4730153 variant and lymph node metastasis in the OSCC cohort.

Oral cancer is the eighth most generally diagnosed cancer amongst males worldwide [1] and the fourth most common malignancy amongst Taiwanese males [2]. Of all oral cancers, oral squamous cell carcinoma (OSCC) is the greatest general (representing approximately 90% of all malignancies of the oral cavity) [3]. Major risk factors for OSCC include human papillomavirus infection [4, 5] and the habitual consumption of carcinogens such as betel nuts, tobacco and alcohol [5]. Around 86% of Taiwanese oral tumor patients are habitual betel nut chewers [2]. Oral cancer is also associated with genetic aberrations resulting from disturbances in carcinogen metabolism, DNA repair and cell cycle control [6].

Polymorphisms in the visfatin gene are associated with breast cancer and coronary artery disease [7]. Visfatin expression affects the regulation of various important factors in development related to tumor progression including tumor survival rate, metastasis and resistance [8]. Although elevated plasma visfatin levels have been identified in patients with OSCC [13], the biological mechanisms underlying the involvement of visfatin in the pathogenesis of OSCC are not well understood. Moreover, no information is available regarding associations between visfatin polymorphisms and carcinogenic lifestyle factors with OSCC. This study therefore investigated the effects of visfatin gene polymorphisms and carcinogenic lifestyle factors on the risk of developing OSCC in a cohort of Taiwanese males. We also examined associations between the visfatin genotypes and OSCC histopathological prognostic factors (pathological stage, tumor status, lymph node status, and metastasis).

1,275 male patients in this study were diagnosed with OSCC at Chung Shan Medical University Hospital, Taichung, Taiwan, between January 1, 2010 and December 31, 2019. We randomly selected 1,195 healthy controls without any history of cancer or oral precancerous disease from the Taiwan Biobank, an ongoing prospective study that has been collecting information since 2012 about genes, lifestyle, and environmental risk factors from over 150,000 individuals aged 30-70 years throughout Taiwan. Demographic data and carcinogenic lifestyle behaviors (betel nut chewing, cigarette smoking, alcohol consumption) were recorded. Daily smokers were defined as persons who had smoked at least one cigarette daily in the previous 3 months. Alcohol consumers were defined as persons who consumed more than two alcoholic beverages per day on average. OSCC was graded using the 2018 American Joint Committee on Cancer (AJCC) Cancer Staging Manual (8th edition) [16]. A pathologist rated tumor cell differentiation by AJCC classification criteria. All procedures of the study involving human participants satisfied the Declaration of Helsinki criteria. All authors had access to the study data and reviewed and approved this study. Chung Shan Medical University Hospital's Institutional Review Board approved the study investigation (IRB No.CS2-21063). Each participant provided written informed consent before enrolling into the investigation.

Selection and genotyping of SNPs

The putative functional relevance of visfatin polymorphisms was examined. Data collected from the Genotype-Tissue Expression (GTEx) database were used to recognize relationship between rs4730153 and visfatin performance in esophagus mucosal tissue [26, 27].

The differences between the OSCC and control groups were analyzed by the Mann-Whitney U test and the Fisher's exact test; between group differences were considered to be statistically significant if p-values were <0.05. Logistic regression was used to calculate odds ratios (ORs) and their 95% confidence intervals (CIs) for associations between genotype frequencies and the risk of OSCC. ORs were adjusted for age, betel quid chewing, cigarette smoking, and alcohol consumption. Clinical staging of OSCC disease was determined in OSCC patients with the variant rs4730153. All collective data were analyzed using Statistical Analytic System (SAS) software version 9.1 for Windows (SAS Institute Inc., CA, USA).

The study enrolled 1,275 males with OSCC and 1,195 healthy, cancer-free males (controls); all were Taiwanese and living in Taichung, Taiwan. Baseline characteristics of the cases and controls, as well as clinical staging of the OSCC cohort, are shown in Table 1. Approximately half of each study group was aged less than 55 years. The mean age was 53.90 ± 10.02 years in the control group and 55.57 ± 10.76 years in the OSCC group. Compared with controls, higher proportions of patients with OSCC chewed betel nuts, were cigarette smokers and consumed alcohol (p<0.001 for all comparisons). Based on the AJCC tumor/node/metastasis (TNM) classification and staging system, 47.0% of patients had clinical stage I/II OSCC and 53.0% had clinical stage III/IV disease; the proportions of patients classified as T1+T2 or T3+T4 status were similar (50.1% and 49.9%, respectively), 65.7% were N0 lymph node status and 34.3% were N1+N2+N3 status, and nearly all patients were metastasis-free (99.2% vs 0.8% with M1 status). OSCC was moderately or poorly differentiated in 86.1% of patients and well-differentiated in 13.9%.

The distributions of demographical characteristics in 1,195 controls and 1,275 male patients with OSCC

The Mann-Whitney U test or Fisher's exact test analyzed differences between healthy controls and patients with oral squamous cell carcinoma. * A p value < 0.05 was statistically significant.

The ORs with their 95% CIs were estimated by logistic regression models;

The ORs with their 95% CIs were estimated by logistic regression models;

An investigation into the association between OSCC clinical status and allelic distributions of visfatin variant rs4730153 revealed no significant associations (Table 4). Next, we found the effect of visfatin gene polymorphisms and carcinogenic lifestyle factors on the clinical status of OSCC. Among the 950 patients who chewed betel nuts, a correlation of rs4730153 variants (GA vs GG) was found for lymph node metastasis (AOR 1.456; 95% CI, 1.022-2.075; p=0.038), but no association was found between any of the studied genotypes and clinical stage, tumor size, or OSCC differentiation (Table 5).

The GTEx data exhibited that respective carrying the AA allele of variant rs4730153 had significantly higher levels of visfatin compared with patients who had the wild-type GG homozygous genotype (p=0.0029; Fig. 1). 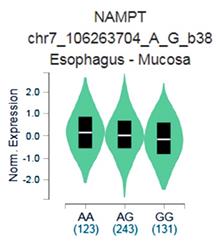 The adjusted odds ratios (AORs) with their 95% CIs were estimated by multiple logistic regression analysis controlling for age, cigarette smoking, and alcohol consumption;

OSCC comprises over 90% of oral cancers [29] and although medical progress has witnessed much improvement in the early detection and treatment of OSCC [30], overall 5-year survival is only around 50% [31]. Important predictors of outcome include the extent of disease at presentation, whether the patient has clinically palpable lymph nodes and histopathological findings [32]. The development of OSCC is influenced by carcinogenic lifestyle behaviors (e.g., betel nut chewing, tobacco smoking and alcohol consumption) [5]. According to literature in the Investigation of Nutritional Status and its Clinical Outcomes of Common Cancer (INSCOC) database, research has shown that malnutrition lowers quality of life and increases the risk of infection, the incidence of postoperative complications and the mortality rate [33]. The association between nutritional status with treatment outcomes in patients with OSCC should therefore be considered. Our analysis of these factors found that all three potentially facilitate the development of OSCC. This finding is echoed in recent studies that have focused on associations between gene polymorphisms and the occurrence and prognosis of oral cancer [34-36], while carcinogenic lifestyle factors specifically elicit epigenetic changes that increase rates of oral cancers [37, 38].

Visfatin is mostly (not exclusively) secreted by adipose tissue [39] and once released into the extracellular milieu, can behave in a paracrine or endocrine manner in various physiological and pathological conditions, such as cancers [39, 40]. High levels of circulating visfatin are reportedly significantly associated with the risk of cancer [41], while higher plasma visfatin levels have been reported in male patients with OSCC, independently of risk factors, which suggests that visfatin is an important contributor to the pathogenesis of OSCC [12]. Epidemiological studies have demonstrated higher alcohol consumption increases the risk of OSCC, with strong dose-response relationships [42, 43]. The risk of OSCC is three to five times higher among people who have ever consumed alcohol than people who have never consumed alcohol [44, 45]. Previous studies have described associations between other SNPs and OSCC risk: for instance, the A>G polymorphism with the rs1412115 variant increased the risk of OSCC in a Chinese Han population [46], while MDM2 SNP 309 and p53 codon 72 polymorphisms influence treatment outcomes of OSCC patients receiving postoperative irradiation [47]. In this study, we selected four visfatin gene polymorphisms (rs11977021, rs61330082, rs2110385, and rs4730153) to compare their allelic distributions between healthy, cancer-free subjects and patients with OSCC. We found that OSCC was more likely to develop in subjects who had the CC genotype of SNP rs11977021 compared with those who had the CT+TT genotype (Table 2). In our analysis of alcohol consumption, we observed that OSCC was significantly less likely to develop among study participants carrying the AA allele at rs4730153 compared with those carrying the wild-type GG allele (Table 3). This evidence indicates a critical role for alcohol consumption in association with visfatin polymorphisms and OSCC. Further research on the consequences of SNP variations at the protein level combined with the effect of alcohol consumption may provide insights into new therapeutic targets for OSCC.

This study revealed significant associations between alcohol consumption and betel nut chewing and the development of OSCC in Taiwanese males with at least one visfatin polymorphism. The GTEx database has revealed a trend for higher visfatin expression amongst carriers of the AA genotype at rs4730153 compared with carriers of wild-type GG homozygous genotypes, which is mirrored by our SNP data and suggests that the SNP rs4730153 may increase visfatin expression. Limitations of this study need to be addressed. Firstly, information on underlying disease processes is not available from the Taiwan Databank, which meant that the control sample in this study could not be fully investigated regarding disease pathways. Furthermore, the long-term survival rate is also highly affected by the recall rate and will of the patient. More complex investigations using larger study samples and longer follow-up are required to examine associations between visfatin SNPs and OSCC.

In conclusion, this study discusses preliminary results of associations observed between visfatin polymorphisms and carcinogenic lifestyle behaviors in a cohort of Taiwanese males with OSCC. Compared with having the CT+TT genotype, having the CC genotype of SNP rs11977021 increased the risk of developing OSCC. Among the study participants who drank alcohol, the AA allele at rs4730153 was inversely associated with the occurrence of OSCC, suggesting a protective effect. In contrast, among those who chewed betel nuts, the GA allele at rs4730153 was significantly associated with lymph node metastasis.

We would like to thank Iona J. MacDonald from China Medical University for her editing of this manuscript.

The data presented in this study are available on request from the corresponding authors.

33. Guo ZQ, Yu JM, Li W. et al. Survey and analysis of the nutritional status in hospitalized patients with malignant gastric tumors and its influence on the quality of life. Support Care Cancer. 2020;28:373-80