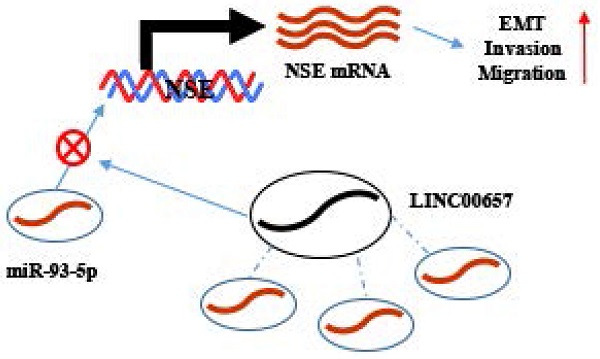 Background: Neuron specific enolase (NSE) is a specific biomarker for SCLC. However, the biological roles and aberrant expression of NSE in SCLC have not been well illustrated.

Conclusion: Overall, our study revealed a novel role of NSE in SCLC. NSE was positively regulated by LINC00657 through competitively interacting with miR-93-5p, which may be potential targets for SCLC patients.

Small cell lung cancer, which accounts for 10-20% of lung cancer, is the most malignant lung cancer subtype [1, 2]. SCLC is sensitive to chemotherapy and radiotherapy, but the patients are more prone to develop disease relapse and distant metastasis [3]. The 5-year survival rate of SCLC is below 5% [4]. In addition, few patients could get benefits from the targeted therapy and immunotherapy [5, 6]. Moreover, the mechanisms underlying the aggressive behaviors and low clinical responses for immunotherapy haven't been elucidated. Therefore, understanding the underlying mechanisms is of great importance for identifying novel treatment targets for SCLC patients.

Neuron-specific enolase (NSE), also known as enolase 2 (NSE), is the most reliable biomarker in the diagnosis of SCLC, due to its high specificity [7, 8]. Serum concentrations of NSE were positively correlated with larger tumor size, advanced tumor stage and distant metastasis [9]. Besides, NSE demonstrated a promising role in predicting the chemotherapy and radiotherapy responses [10, 11]. NSE could enhance aerobic glycolysis to promote survival and proliferation of tumor cells [12-14]. NSE could be transferred to the cell surface, which resulted in activating survival promoting signal pathway to promote tumor cell migration [15]. However, the biological functions and upstream regulatory factors of NSE have not been clearly defined in SCLC.

Long non-coding RNA (lncRNA), non-coding RNA longer than 200 nucleotides, demonstrated important roles in carcinogenesis [16, 17]. LncRNAs could modulate various biological functions by regulating mRNA expression through sponging miRNAs [18, 19]. In this study, we firstly studied the role of NSE in the migration, invasion and EMT process of SCLC. We further identified lncRNA/miRNA which could regulate the expression and function of NSE. Our study would provide novel insight into the metastasis and poor OS for SCLC patients.

This study involved normal lung tissues and SCLC tissue samples. Ethics Committee of Guangzhou First People's Hospital approved this study. And all the patients were informed. Here, normal tissues were collected from the normal lung tissues surrounding tumors, which was histopathologically confirmed. All the cancer patients were histopathologically confirmed and none patients have received any prior anti-tumor therapies prior to the collection of the tissues. Patients were staged according to the AJCC) Cancer Staging Manual (seventh edition).

Human normal lung bronchial epithelial cell line 16HBE and SCLC cell lines (H446, H69, H209) were purchased from the Chinese Academy of Science. The cells were cultured in RMPI-1640 supplemented with 10% fetal bovine serum (FBS). All the cell lines were cultured in a humidified atmosphere of 37 °C containing 5% CO2.

Firstly, total RNA was extracted from tissue specimens and cell lines using TRIzol reagent as previously described [20, 21]. Then complementary DNA was synthesized based on reverse transcription from total RNA using Takara cDNA Synthesis Kit. Resulting cDNA was subjected to real time quantitative PCR using SYBR green master mix. The sequences of the sense and antisense primers were as follows: 5'-AGCCTCTACGGGCATCTATGA-3' (F) and 5'- TTCTCAGTCCCATCCAACTCC-3' (R) for NSE;5'-ATTTTTCCCTCGACACCCGAT-3' (F) and 5'-TCCCAGGCGTAGACCAAGA-3' (R) for E-cadherin; 5'-AGCCAACCTTAACTGAGGAGT-3' (F) and 5'-GGCAAGTTGATTGGAGGGATG-3' (R) for N-cadherin; 5'-TGATAGGATACATCTTGGACATGGA-3' (F) and 5'-AACCTAATGAACAAGTCCTGACATACA-3' (R) for LINC00657; 5'-CTCCTCCTGTTCGACAGTCAGC-3' (F) and 5'-CCCAATACGACCAAATCCGTT-3' (R) for GAPDH; 5'-TTATGGGTCCTAGCCTGAC-3' (F) and 5'-CACTATTGCGGGCTGC-3' (R) for U6. Comparative threshold cycle (2-ΔΔCT) method was used to calculate the relative mRNA values. The relative expression levels of AP000695.2 were normalized to the value of GAPDH.

Paraffin-embedded SCLC tissue sections from 68 cases of SCLC patients were collected at Guangzhou First People's hospital. After antigen retrieval, the slides were incubated with the primary antibody (NSE, 1:100, Abcam) overnight. Then diaminobenzidine (DAB) was used for immunohistochemical staining following the incubation with the secondary antibody. Then the slides were hematoxylin counterstaining, dehydrated and sealed. Finally, the images were collected under a microscope.

The cDNA sequence of NSE or LINC00657 was subcloned into the pcDNA3.1 expression vector (Invitrogen, Shanghai). Indicated H446 cells were transfected with miR-93-5p inhibitor or mimic (purchased from GenePharma) to knock down or overexpress miR-93-5p. Cells transfected with scramble was used as negative control (NC). All the transfection experiments were performed using Lipofectamine2000 (Invitrogen).

Cell proliferation capability was assessed using Cell Counting Kit-8 (CCK8) assay. Briefly, 5000 cells in 100 μL culture medium were seeded in a 96-well plate. 10 μL CCK8 reagent was added and incubated at different time point (12, 24, 36, 48 h). The absorbance of each well was measured under a microplate reader at a wavelength of 450 nm.

Cell migration and invasion capabilities were assessed using with or without pre-packed Matrigel (BD Bioscience, USA). Briefly, indicated cells suspended in serum-free medium were placed in upper chambers as a density of 1×105 cells per chamber. After incubation for 12 h or 24 h, the cells in the upper chamber was removed, fixed with 4% paraformaldehyde and stained using 0.1% crystal violet. Cell migrated or invaded to the lower chamber were counted and photographed under an optical microscope.

Nuclear and cytoplasmic fractions were separated according to the manufacturer's constructions (PARIS kit, Thermo Fisher Scientific, USA). Then qRT-PCR was performed to detect the expression levels of LINC00657 in the nuclear and cytoplasm. GAPDH and U6 were used as internal controls.

GraphPad Prism 7.0 software was utilized for all statistical analysis. The relationships between NSE expression and various clinico-pathological parameters were assessed using chi-square test. The correlations between two groups were compared using Student's t-test, one-way ANOVA, or Pearson correlation coefficient analysis. A two-tailed p value < 0.05 was accepted as significant difference. These experiments are repeated at least 3 times.

Serum NSE is an ideal biomarker for the diagnosis and treatment efficacy monitoring in SCLC. However, the expression of NSE in tumor tissues and its biological functions have not been well studied. In this study, we compared mRNA expression levels NSE between 16 cases of normal tissues and 38 cases of human SCLC tumor tissues. The qRT-PCR result showed that NSE expression was significantly upregulated in SCLC tissues (Figure 1A, P = 0.003). Immunohistochemistry confirmed the expression of NSE in SCLC tissues. Figure 1B demonstrated the representative microscopic images of NSE expression. Among the 68 cases of SCLC tissue sections, there were 52 cases (76.47%) demonstrated positive NSE expression. High NSE expression was positively correlated T stage (P = 0.025, Table 1), advanced TNM stages (P = 0.001, Table 1), as well as distant metastasis (P = 0.015, Table 1). Moreover, high expression of NSE was positively correlated with poor overall survival of SCLC patients (Figure 1C. P = 0.013). These data indicated that NSE acted as an oncogene, which might promote tumor progression and distant metastasis in SCLC.

The relationships between NSE expression and clinicopathological parameters in SCLC 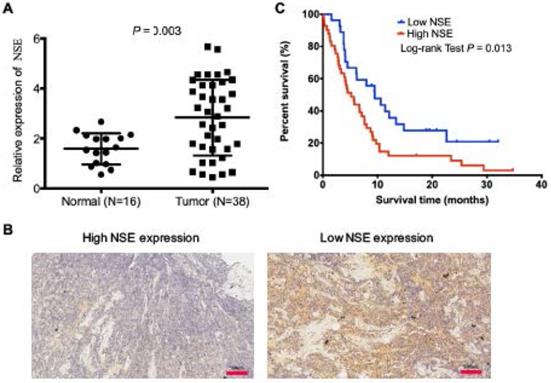 NSE expression was regulated by miR-93-5p 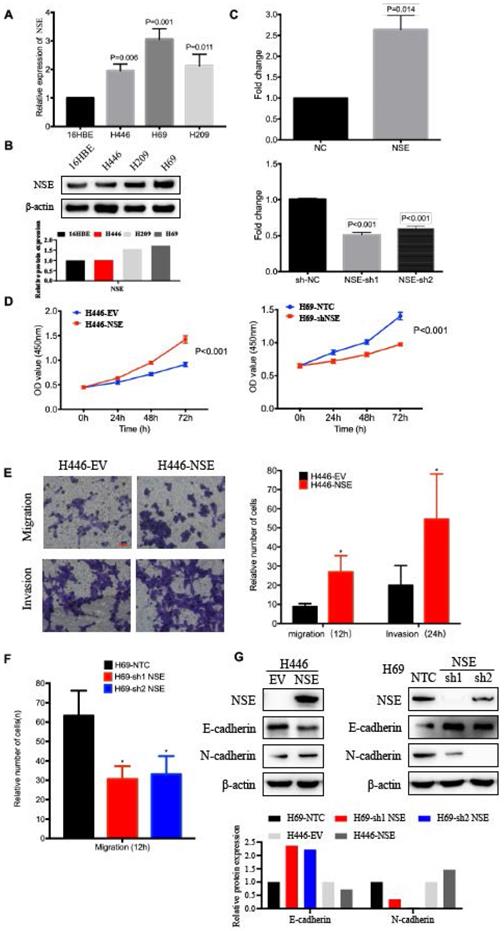 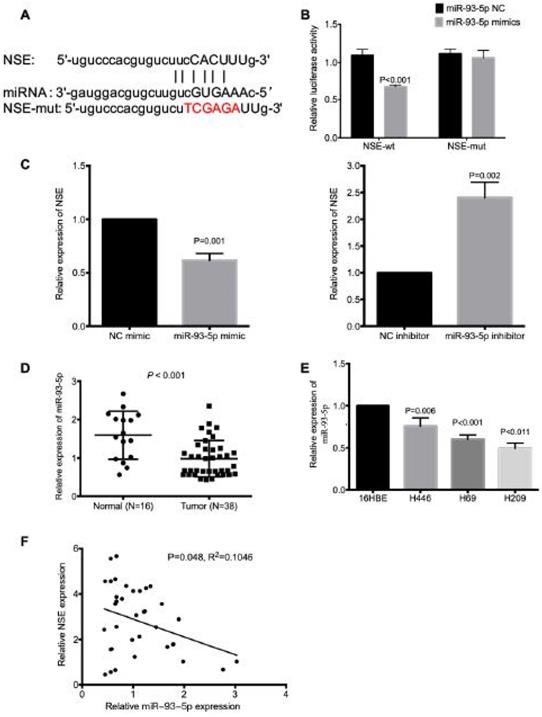 miR-93-5p inhibited cell migration, invasion and EMT of SCLC cell by down-regulated the expression of NSE 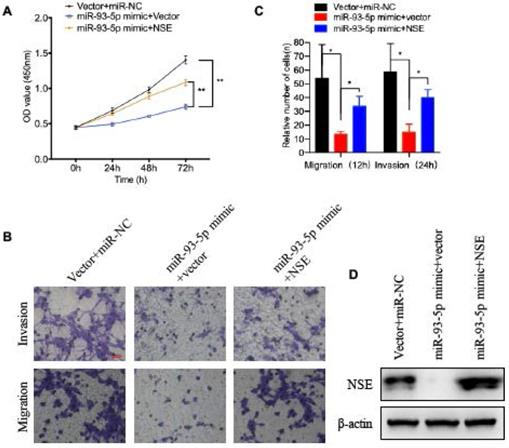 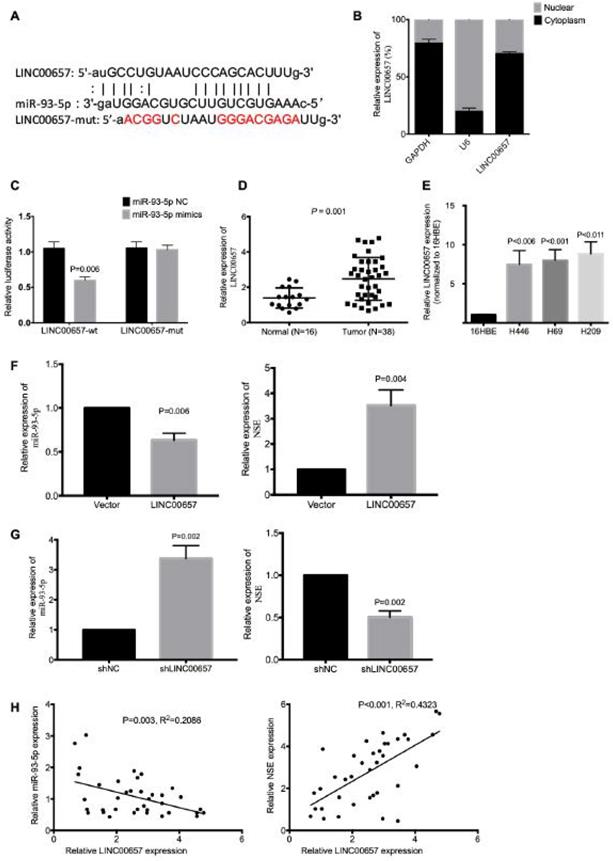 NSE is mainly expressed in neurons and neuroendocrine cells, which is generally accepted as a specific biomarker for neuroendocrine tumors, such as SCLC [25, 26]. For a long time, most of the studies focused on the role of NSE as a biomarker in SCLC. Here, we discovered that upregulated expression of NSE was positively correlated with advanced tumor stage, distant metastasis and poor overall survival of SCLC patients. Epithelial-mesenchymal transition (EMT) is an important process for tumor cell invasiveness and metastasis initiation, by which tumor cells lose cell-cell adhesion and enable tumor cell invasion [27]. Tumor cells gained EMT process largely contributed to tumor cell metastasis, gain of stem cell-like phenotype and drug resistance [28, 29]. Here, our results indicated that modulation NSE expression could regulate SCLC cell migration, invasion and the expression of EMT makers, such as E-cadherin and N-cadherin. The modulation of NSE on EMT process might contribute to the enhanced migration and invasion capabilities of SCLC cells, as well as the distant metastasis. And our previous study also found that NSE could activate the wnt/beta-catenin pathway and promote the EMT process and tumor metastasis of SCLC cells [30]. However, the mechanisms contributing to the upregulated expression of NSE in SCLC remain largely unknown.

miRNA-mRNA interactions could inhibit the translation or degrade targeted mRNAs to downregulated the expression of target genes [31, 32]. The miRNA-gene interactions were involved in multiple cellular processes during tumor development, which including cell proliferation, cell migration, cell invasion, chemo-resistance, tumor relapse and distant metastasis [33-35]. Moreover, miRNAs were correlated with chemoresistance, proliferation and poor outcome of SCLC such as miR-886-3p [36], miR-495 [37]. Thus, we next explored the potential miRNA which could interact with NSE and regulate the expression of NSE. According to bioinformatics analysis tool and dual luciferase reporter assay, we verified that miR-93-5p could directly interact with NSE. Downregulated expression of miR-93-5p was detected in SCLC tumor tissues and cell lines. There was a negative correlation between miR-93-5p expression and NSE expression. The relative expression levels of NSE were modulated by overexpression or knockdown of miR-93-5p. miR-93-5p, as a circulating miRNA, functioned as diagnostic or prognostic biomarker in multiple malignancies [38]. Consistently, multiple studies also revealed that down-regulated expression of miR-93-5p was detected in tumor tissues and cell lines, such as colorectal cancer, gastric cancer [39-42].

There are multiple target genes for each miRNA [43]. miR-93-5p could regulate HIF-1A/AXL signaling pathways to facilitate the progression and EMT of colorectal cancer [39]. Liu et al found that downregulated expression of miR-93-5p could upregulate the expression of AHNAK to promote the progression of gastric cancer [41]. Chen et al revealed that miR-93-5p functioned as a tumor suppressor by suppressing the expression of programmed death ligand 1 (PD-L1) [40]. Here, we found that miR-93-5p inhibited cell proliferation, migration, invasion and EMT by directly targeting NSE.

LINC00657 promotes the migration and invasion of SCLC cells by upregulating the expression of NSE. SCLC cell lung H69 was transfected with si-LINC00657 and/or NSE overexpression vector. (A, B) Cell migration and invasion capabilities were investigated using transwell assay. (C) The expression of NSE, EMT-related markers (E-cadherin and N-cadherin) were detected using western blot. And the quantification of the relative protein amount was shown in the lower panel. (D) Cell proliferation viabilities were assessed using CCK8 assay. 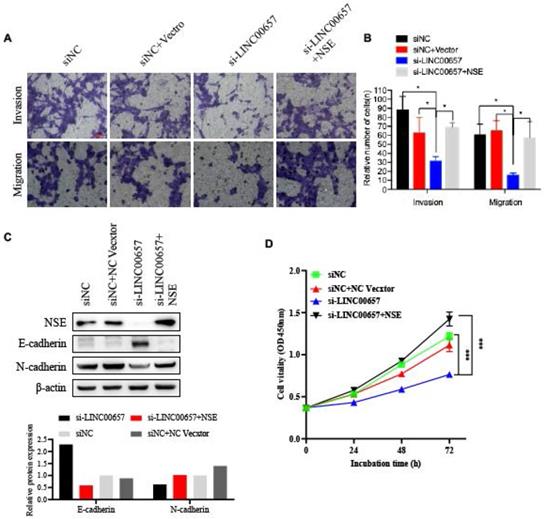 Working model. NSE was positively regulated by LINC00657 through sponging of miR-93-5p and promoted migration, invasion and EMT of SCLC cells. 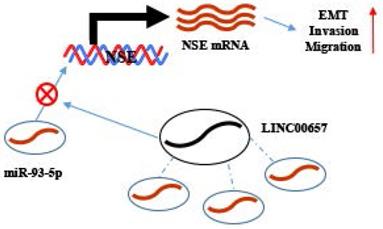 Targeted mRNA expression could be regulated by lncRNAs/miRNA axis, which resulted in altering the biological activities of tumor cells. Moreover, the biological functions of LINC00657/ miR-93-5p/NSE in SCLC were further explored. Our results showed that overexpression of NSE abolished the inhibitory effect of LINC00657 on the migration, invasion and EMT of SCLC cells. Consistently, Zhang et al found that LINC00657 promoted the invasiveness and metastasis of osteosarcoma via regulating miR-106a and PD-L1 [53]. LINC00657 upregulated the expression of EMT-related target gene ZEB1 [54]. Bi et al. found that LINC00657 could act as a ceRNA by sponging miRNA-433 to upregulated PAK4 expression to promote invasion and progression of pancreatic ductal adenocarcinoma [55]. Therefore, LINC00657, miR-93-5p and NSE formed regulatory axis for the EMT process regulation in SCLC.

In conclusion, proteins, miRNAs and lncRNAs all demonstrated promising noninvasive biomarkers for SCLC diagnosis and treatment surveillance. Here, we identified LINC00657/miR-93-5p/NSE in regulating the migration, invasion and EMT of SCLC. LINC00657 positively regulated the expression of NSE by sponging miR-93-5p in SCLC cells, thereby promoting EMT process, migration and invasion of SCLC cells. These results provided us with novel insights about the progression of SCLC. Our study will contribute to the exploring the biomarkers (LINC00657, miR-93-5p and NSE) for predicting prognosis and therapeutic targets in SCLC.

All data in our study are available from the corresponding authors upon reasonable request.

3. A S, H M, M H, I L, I M, F B. et al. Association of Chemoradiotherapy With Outcomes Among Patients With Stage I to II vs Stage III Small Cell Lung Cancer: Secondary Analysis of a Randomized Clinical Trial. JAMA oncology. 2019;5:e185335