The Relationship between Lymphocyte Subsets and the Prognosis and Genomic Features of Lung Cancer: A Retrospective Study

Methods: 598 lung cancer patients with complete data were included in this study between 2011 and 2018. Kaplan-Meier method and Pearson analyses were conducted to study the prognostic value of CD3+, CD4+, CD8+ T lymphocytes and the rate of CD4/CD8.

Conclusions: Lung cancer patients with EGFR mutation had lower percentage of CD8+ lymphocytes. Lymphocyte subsets might be potential prognostic biomarkers of lung cancer, but they are affected by gender and tumor stage.

Lung cancer is one of the most common malignant tumors with the highest mortality rate in the world [1]. It accounts for about a quarter of all cancer deaths [2]. Although the treatment of lung cancer, such as surgery, radiotherapy, chemotherapy and targeted therapy, has made great progress in recent years, the prognosis of lung cancer is still poor because most patients have been diagnosed in the locally advanced stage or in the stage of extensive metastasis [3]. The five-year survival rate for patients with localized lung cancer is about 55%, while for patients with distant metastasis is only 4% [4, 5].

A series of studies have shown that the occurrence, development and prognosis of malignant tumors are closely related to the composition and function of immune system [6, 7]. The systemic effects of tumor can make distant tissues and organs change in favor of metastasis and promote the progress of tumor [8-13]. The metastasis of lung cancer is related to the increase of circulating tumor cells [14], which can be influenced by the change of CD3+, CD4+ cells in peripheral blood [15]. A study about laryngeal squamous cell cancer indicates lower CD4/CD8 ratios are related to recurrent disease and a higher level of CD3 and CD4 is associated with nodal metastasis [16]. The increased risk of lung cancer is associated with low CD4 cell count and low CD4/CD8 ratio [17]. However, the prognostic value of peripheral T lymphocytes subsets in lung cancer has not been proved by studies with large data.

We retrospectively reviewed the medical records of patients who diagnosed with lung cancer at West China Hospital, Sichuan University, from January 2011 to January 2018. Inclusion criteria were: lung cancer patients, age > 18 years, with enough clinical and blood test data, no previous treatment for lung cancer before diagnosis. Criteria for exclusion from this study were: individuals with other malignancies or combined with immune system diseases, with an infection history or using drugs which could affect their immune system within one month before diagnosis.

Clinical and pathological data of included patients were collected through the medical record management system of West China Hospital. The basic information collected were: age at diagnosis, gender, smoking history, and histology. TNM stage of all patients were restaged according to the 8th International Classification System for Lung Cancer [20]. Peripheral indicators were obtained <1 week prior to the first treatment, including the proportion of CD3+, CD4+, CD8+ T lymphocyte subpopulations and the ratio of CD4/CD8.

The survival data included overall survival (OS) and progression-free survival (PFS). OS was defined as the time from the start of treatment to death from any cause. PFS was the time from start of treatment to radiographic or clinical progression or death from any cause. Patients who had not progressed or died at the last time of follow-up were censored at the date of the last contact.

X-tile software (Yale University, New Haven, CT, USA) was used to determine the optimal cut-off values of the proportion of CD3, CD4, CD8, CD4/CD8, neutrophil to lymphocyte ratio (NLR)and platelet to lymphocyte ratio (PLR) for predicting lung cancer prognosis[21]. Kaplan-Meier curves were used for the analysis of OS and PFS. The difference between groups were compared by the log-rank test. Canonical Correlation Analysis (Canoco 5.0) and Pearson analysis were used to evaluate the correlation between CD3, CD4, CD8, CD4/CD8, NLR, PLR, and other characteristics of lung cancer and PFS, OS. The comparation of lymphocyte subsets between different genomic features was performed by t-test. Two-tailed P values of <0.05 were considered to define statistical significance. All these statistical analyses were carried out using SPSS 20.0 (IBM Corp., Armonk, NY, USA).

597 lung cancer patients with enough clinical and peripheral blood data were included in this study. The baseline characteristics of these patients were shown in Table 1. Median age of these patients was 61 years old. More than half of patients were male (58.96%) and smokers (53.77%). 397 (66.5%) individuals were diagnosed with adenocarcinoma. The majority of patients were diagnosed at late tumor stage (Ⅲ-Ⅳ, 72.53%). The prevalence of EGFR mutation in tumor cell was 45.55%, ALK rearrangement 8.11%, ROS-1 rearrangement 2.56%, PD-L1 expression positive 59.01%.

The clinical-pathological characteristics of patients (N (%)). 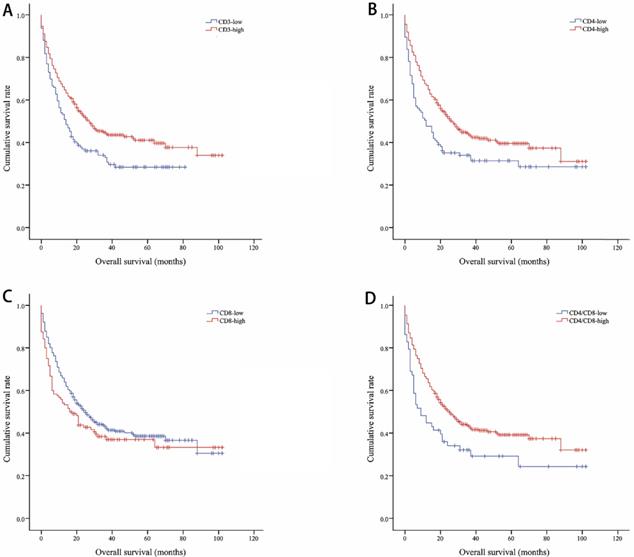 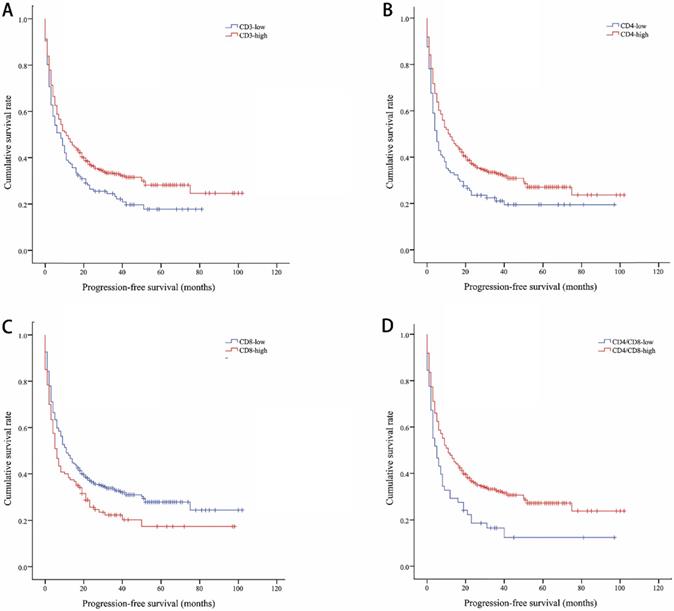 The correlation between lymphocyte subsets and prognosis

This study indicated that the high percentages of peripheral CD3+, CD4+ T cells and CD4/CD8 ratio were associated with longer OS in lung cancer patients. However, the high baseline proportion of CD8+ T cells was significant predictors of poor PFS. Lung cancer patients with EGFR mutation had lower percentage of CD8+ lymphocytes.

Canonical Correlation Analysis. The canonical correlation analysis (CCA) were performed in this work to further elucidate the interactions among the prognostic biomarkers and the potential impact factors (IF). The values on the axes indicate adjusted explained variations. Triangles mean prognostic biomarkers, arrows mean IF (except OS and PFS). Stage and gender were the dominant IF, which contributed to the variations in CA1 and CA2, respectively. According to the intersection angle between the biomarkers and the IF, CD8 and PLR might be the candidates to estimate the prognosis. 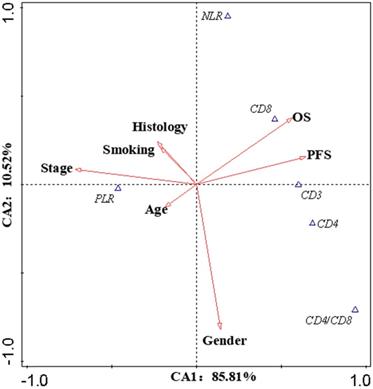 Previous study observed that the risk of lung cancer was associated with low CD4 cell count and low CD4/CD8 ratio [17]. Peripheral CD8+T cells was higher in lung cancer patients compared to the health, while CD3+ and CD4+T cells, and CD4/CD8 ratio was significantly lower [22]. The relationship of lower CD4+/CD8+ ratios and recurrent diseases and higher level of CD3+ and CD4+ cells and nodal metastasis was found in laryngeal squamous cell cancer[16].

In our study, the prevalence of EGFR mutation in tumor cells was 45.55%, ALK rearrangement 8.11%, ROS-1 rearrangement 2.56%, which was similar to the results of other studies [23-25]. The expression of PD-L1 in tumor cells was consistent with previous studies [26, 27]. We found patients with EGFR mutation had lower percentage of circulating CD8+ T cells. A precious study found there was no significant difference in the proportion of tumor infiltration CD8+ T cells between EGFR mutation and EGFR wild-type patients [28]. Future researches were need to clarify the relationship of T lymphocytes and EGFR mutation in lung cancer.

The datasets used and/or analyzed during the current study are available from the corresponding author on reasonable request.

Our study was approved by the ethics committee of West China hospital (IRB:2018/488) and carried out following the local ethical guidelines.