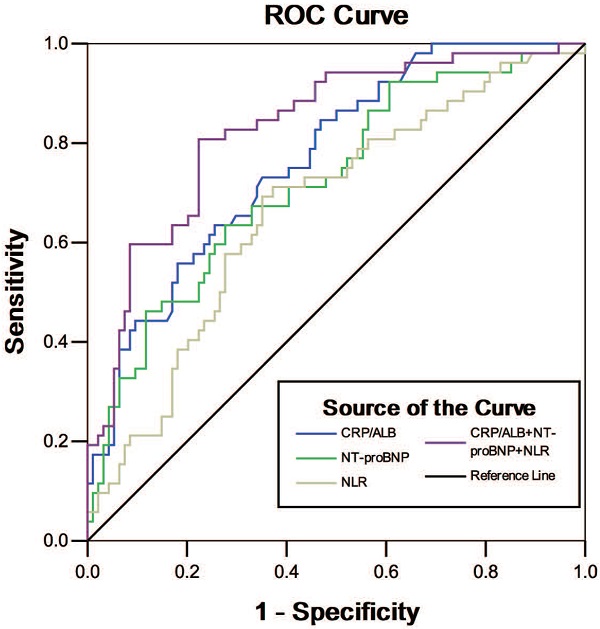 Background: Systematic inflammation, nutritional status, and cardiovascular function have been associated with the outcomes of acute exacerbation of chronic obstructive pulmonary disease (AECOPD) patients with heart failure (HF). However, the value of their relevant biomarkers in predicting mortality has not been well defined yet. We aimed to investigate the prognostic value of circulating biomarkers including C-reaction protein (CRP)/albumin (ALB), neutrophil-lymphocyte ratio (NLR), platelet-lymphocyte ratio (PLR), and N-terminal pro-brain natriuretic peptide (NT-proBNP) for AECOPD patients with HF.

Methods: A retrospective study was carried out in the Second Clinical College of Jinan University from January 1, 2013 to January 31, 2019. A total of 146 cases of AECOPD complicated with HF were enrolled and classified into survivor group (n=94) and non-survivor group (n=52). The baseline characteristics, CRP/ALB ratio, NLR, PLR, serum levels of NT-proBNP, and other indicators were collected. The predictors for prognosis were analyzed by multivariate logistic regression, and the ability to predict 28-day mortality was evaluated by receiver operating characteristics curve (ROC) and the area under the curve (AUC).

Chronic Obstructive Pulmonary Disease (COPD), a common and progressive lung disease, is characterized by persistent respiratory symptoms and airflow limitation. COPD is currently a major cause of mortality and morbidity worldwide, and is estimated to become the third leading cause of death by 2020 [1]. Acute exacerbation of COPD (AECOPD) is the most common cause of increasing hospitalization rate, and accounts for increasing death among patients with COPD [2,3]. Meanwhile, heart failure (HF) is one of the most critical comorbidities in patients with AECOPD. It was reported that the prevalence of COPD patients with systolic or diastolic HF ranges from 20 to 70%, which is associated with higher incidence of hospitalization and mortality compared to patients without HF [2,4]. Therefore, early identification of patients with poor prognosis is very critical to the optimization of personalized therapies. Circulating biomarkers, which are easily accessible from peripheral blood, might provide important information for clinical decision, but their roles in predicting prognosis in AECOPD complicated with HF has not been well be defined yet.

It has been recognized that systematic inflammation, nutritional status, and cardiovascular function play essential roles in the development of AECOPD [5-7]. N-terminal pro-brain natriuretic peptide (NT-proBNP) is a well-established biomarker in determining diagnosis and prognosis in HF [6,7], and has also been found to be increased in AECOPD with or without HF [8,9]. In addition, several novel inflammatory markers, such as C-reaction protein (CRP)/albumin (ALB) ratio, neutrophil-lymphocyte ratio (NLR), and platelet-lymphocyte ratio (PLR) have also been recently used for monitoring of inflammatory conditions. CRP is one of the non-specific proteins that represent systemic inflammation, while a low ALB level may reflect a temporary condition that requires medical intervention. It has been shown that CRP/ALB ratio can be used as a long-term marker of prognosis in septic patients, and provides more stable information than CRP or ALB alone [10]. Moreover, both NLR and PLR are proved to play an important role in outcome prediction and prognosis of COPD patients and HF patients, respectively [3,6-9]. However, the prognostic value of these indicators in AECOPD patients with HF are still uncertain. This study aimed to demonstrate the utility of circulating biomarkers including CRP/ALB ratio, NLR, PLR, and NT-proBNP in predicting prognosis in AECOPD patients with HF.

A total of 146 patients hospitalized for AECOPD complicated with HF was consecutively collected from January 1, 2013 to January 31, 2019. Demographic and medical data were retrospectively obtained from electronic patient records and paper notes of Shenzhen Institute of Respiratory Diseases, the Second Clinical College of Jinan University in Shenzhen, China. The study protocol (LL-KY-201932) was approved by the Ethics Committee of the Second Clinical College of Jinan University. Requirement for patient consent was waived.

Patients with COPD were identified by International Classification of Diseases, Tenth Revision (ICD-10) principal diagnosis codes J44.900; exacerbations were defined as cases' hospitalized with the codeJ44.100 and J44.101 as a main reason for admission; HF was identified by the codeI50.000, I50.001, I50.002, I50.100, I50.101, I50.102, I50.103, I50.907, and I50.900. We obtained data regarding baseline demographics, staging of COPD according to Global Initiative for Chronic Obstructive Lung Disease (GOLD), laboratory parameters, chest radiographs, and echocardiograms at the time of admission.

The inclusion criteria was as follows: 1) diagnosis of AECOPD, defined as an acute worsening of respiratory symptoms that lead to need additional therapy [1]; 2) HF occurred during the hospitalization and the diagnosis of HF was in accordance with the 2016 ESC Guidelines [11]. We excluded patients with any of the following characteristics: asthma, pneumonia, pulmonary thromboembolism (PTE), tuberculosis, acute respiratory distress syndrome, rheumatic diseases, cancer, valvular heart disease, and acute myocardial infarction. We also excluded patients who died in the emergency room because the measurements were not available for these patients. More details were shown in the Figure 1.

Our primary outcome is 28-day mortality. It was assessed both from the medical records and phone calls. All the adverse events were adjudicated by clinicians. All the patients were divided into survivors group (n=94) and non-survivors group (n=52) according to their survival conditions.

Statistical Package for Social Sciences (SPSS), version 13.0 (SPSS Inc, Chicago, IL, USA) was used for statistical analysis. Measurement data from normal distribution was expressed as the mean ± standard deviation and independent-samples t test was used to assess significant differences. Non-normally distributed continuous data was expressed as the median (interquartile range, IQR), and two-sample Wilcoxon Rank Sum test was used to analyze. Descriptive data was also expressed as the median (IQR). Chi-square test or Fisher's exact test was for categorical variables. Multivariate logistic regression analysis was used to check the independent correlation factors. Receiver operating characteristic (ROC) curves were generated to evaluate the biomarkers for predicting the mortality hazard. The Youden index was used to determine the optimal cutoffs of variables including CRP/ALB, NLR, and NT-proBNP. The combination tests based on logistic models were performed to assess the prognostic performance of biomarker combinations. A P value of less than 0.05 (P< 0.05) was considered as a statistically significant difference.

Clinical summary of the AECOPD patients with HF

Screening and enrollment of the study. 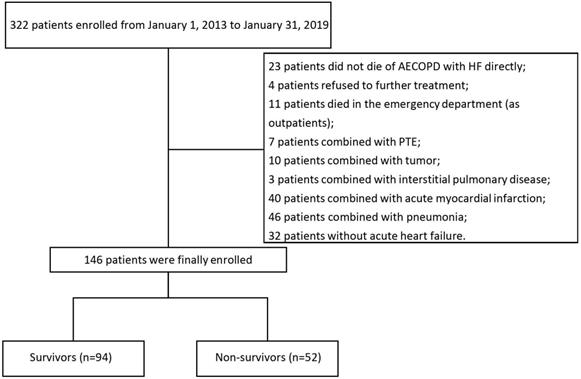 Comparison of Laboratory indexes between the study groups 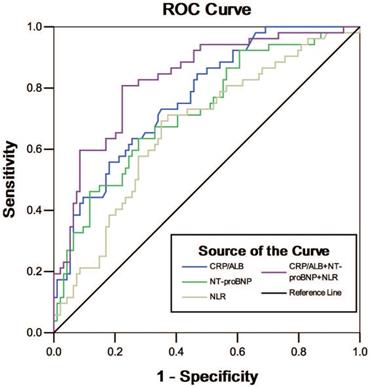 Prognostic value of the biomarkers

Previous studies have shown that CRP could be used as an independent influencing factor to evaluate the control level of COPD chronic inflammation in patients [14-16], while ALB is a prognostic marker of infection-related disease [17]. Our study observed that high CRP and PCT levels as well as low ALB level were associated with death in AECOPD patients with HF. This data confirmed that non-survivors have more severe systematic inflammatory response and lower nutrient intake than survivors. Although CRP and ALB have good prognostic significance for AECOPD patients, the early inflammatory response and nutritional status of the body may not change in equal proportion. Therefore, CRP/ALB ratio has been recently identified as a valuable predictor of prognosis in patients with various diseases such as tumor and sepsis [10,17,18], whereas its prognostic role remains unclear in AECOPD patients with HF. In our study, we showed that CRP/ALB ratio was significantly higher in non-survivors than in survivors (P< 0.001). The sensitivity and specificity of CRP/ALB ratio were better than other biomarkers in predicting 28-day mortality with a cut‐off value of 2.48. It showed that low-grade systemic inflammation and poor nutrition may play an essential role in leading to aggravation of disease. Furthermore, CRP/ALB ratio was proved as an independent risk predictor for the prognosis of AECOPD patients with HF in this study.

NT-proBNP is an important biomarker in the diagnosis of HF, and represents a novel indicator that identifies the risks of COPD exacerbation. In our study, we observed NT-proBNP level and NYHA functional classification were significantly higher in the non-survivors. Though, LVEF was similar between the two groups. Our finding also suggested that NT-proBNP is an independent death risk factor in AECOPD patients with HF. This result may be in favor of the results of previous studies [19,20]. Moreover, our study demonstrated that NT-proBNP level is significantly associated with 28-day mortality, but its relevance to mortality is inferior to that of CRP/ALB. Above the cut-off of 14265.25 ng/ml, a higher mortality was observed in AECOPD patients with HF. Therefore, increasing NT-proBNP may indicate a poor prognosis for patients. It suggested that dynamic detection of NT-proBNP levels may be helpful in predicting the prognosis of AECOPD patients with HF, while the cardiovascular functions cannot better assess patients' mortality as compared with other factors such as systematic inflammation and nutrition.

We found that elevated NLR is also a strong predictor of poor outcomes in AECOPD patients with HF. In consistent with our findings, the range of NLR levels have been determined in COPD patients with different conditions (eg. acute respiratory failure, chronic respiratory failure, and existence of pneumonia) in previous studies. Furthermore, our study suggests higher NLR is related to 28-day mortality in AECOPD patients with HF. It is worth noting that the cut-off value of 16.83 for NLR was nearly two times higher in the AECOPD subjects with HF than in the COPD subjects in Yao et al's study [3]. NLR is valuable in assessing the severity of COPD attack and heart function, and this may help to indicate the outcomes of AECOPD complicated with HF. Even though the predictive ability of NLR and the AUC was less than the other inflammatory biomarkers including CRP/ALB and PCT, the combination of NLR and CRP/ALB with NT-proBNP increased prognostic accuracy for 28-day mortality in AECOPD patients with HF. It was suggested that NLR level should be explained with other inflammatory biomarker such as CRP/ALB and heart failure indicator to improve the ability of predicting mortality risk.

PLR is another indicator for systemic inflammatory disorders [21]. El-Gazzar et al [19] found that elevated PLR together with NLR were significantly associated with smoking index, COPD stage and dyspnea severity in stable COPD patients. However, conflicting with these findings, our study did not find the statistically significant difference in PLR between the survivors and non-survivors. The role of PLR in AECOPD complicated with HF and the reason why no difference of PLR ratios was found between the two groups is not clear.

However, there were some limitations in our study. The small sample size and the limited number of events were major limitations, and the selection of patients was based only on the ICD codes which were related to selection bias. Moreover, we only collected the circulating biomarkers once at baseline, which cannot represent the underlying changes of systematic inflammation, nutritional status, and cardiac function in patients. Because this is a retrospective study, some relevant information such as exercise tolerance, modified Medical Research Council dyspnea scale (mMRC), and pulmonary function test were not available. Nevertheless, the strength of our study is that we assessed the predictive value of multiple mortality-associated biomarkers, taking inflammation, nutrition and cardiovascular function into account, some of which were left out of the previous studies.

In summary, we suggest that the levels of NLR, CRP/ALB, and NT-proBNP may be used to be prognostic markers for assessing the severity of disease and predicting 28-day mortality in AECOPD patients with HF. The combination of NLR, CRP/ALB, and NT-proBNP may significantly increase the mortality prediction, and provide prognostic information for future studies of different population of AECOPD patients.

Some, or all data, or code generated or used during the study are available from the corresponding author by request.

The study was approved by the Ethics Committee of the Second Clinical College of Jinan University. Since the study was a retrospective cohort and the data analyzed were anonymized, the Ethics Committee waived the requirement for written consent from the patients. We confirm that the patient data were maintained with confidentiality, in compliance with the Declaration of Helsinki.