Hallux valgus deformity refers to lateral displacement of lateral deviation in the first metatarsophalangeal joint, which is commonly referred to as a bunion, is a foot disease with a higher incidence in women. It is a complex anatomical deformity that is challenging to treat. Hallux valgus makes the patient very painful and it may lead to foot, ankle, or knee joint deformity [1]. Although the research on hallux valgus has been paid more attention in recent years, it mainly focuses on anatomical structure and clinical treatment, and the pathogenesis of thumb hallux valgus is rare. The main pathological changes that occur in a hallux valgus are osteophyte formation and articular capsule thickening. However, the molecular biology mechanism of hallux valgus is not clearly understood.

Previous studies have shown that fibroblast growth factors (FGFs) may stimulate the proliferation of the bone tissue of the first plantar toe joints providing a new direction in the investigation of hallux valgus disease pathology [2]. FGFs contains the two large intron sequences and three exons area, which is one of the characteristics of FGF family factor. The size of the protein-coding regions of FGFs genes ranges from 5 to 100 kb [3]. FGFs play an important role in the process of endochondral ossification and subperiosteal osteogenesis [4]. FGF9 is an important member of FGFs. FGF9 is widely distributed in various tissues of the human body. It is involved in a variety of physiological and pathological processes such as bone development, blood vessel formation, embryonic development, damage repair, cell apoptosis, and tumor growth [5-7]. Its existence can effectively promote mitosis and cell growth. FGF9 could form dimers in solution with a K(d) of 680 nm [8] and activate fibroblast growth factor receptor 2 (FGFR2) to promote osteogenesis [9,10]. Investigating the regulation of FGF9 in hallux valgus may be useful for understanding the development and pathogenesis of this disease.

Recent studies have contributed to our understanding of the pathogenesis of hallux valgus through genetic predisposition [11,12]. However, gene-related studies of this disease are rare. In our study, we focus on the miRNAs expressed in hallux valgus. Hundreds of miRNAs that regulate protein-encoding genes have been identified. These miRNAs play the role of regulators in cell proliferation, differentiation, apoptosis, as well as organ development and inflammatory diseases [13,14]. Recent studies have demonstrated that miRNA-182 (miR-182) can regulate FGF9 in nerve cells [15,16].

Preparation of the lentivirus vector

Ten hallux valgus that were removed during surgical procedures were used in this study (36 women and 4 men; age range, 20-75 years). Patient consent for removal of the tissue was obtained before surgery. Samples were taken for morphological observation and extraction of RNA. 20 cadaver specimens as control (12 women and 8 men; age range, 20-60 years). Cadaver specimens from the knee in patients with severe trauma blood supply to the leg amputation in the car accident.

Total RNA was extracted from the samples using Trizol reagent (Invitrogen, USA) according to manufacturer's instructions and quantified spectrophotometrically at 260 nm with acceptable 260/280 ratios between 1.8 and 2.0. The RNA quality was also checked by 1% agarose gel electrophoresis, stained with 1 μg/mL ethidium bromide. Residual genomic DNA was removed by incubating RNA with RNase- free DNase (Promega, USA). Total RNA was reverse transcribed using a reverse-transcription kit (TaKaRa, China) according to the manufacturer's protocols. Real-time PCR was performed on ABI Prism 7900HT Fast System (Applied Biosystems, USA) using SYBR Premix Ex TaqTM II (TaKaRa, China). Amplifications were carried out in a total volume of 20 μL and cycled 40 times after initial denaturation (95°C for 30 s) with the following parameters: 95°C for 5 s and 60°C for 30 s. Primers sequences were listed in Table 1, and β-action was used as an internal control. The relative mRNA expression was quantified through a comparison of the cycle threshold (Ct) values. The experimental data were processed using the 2-ΔΔCt method: ΔΔCt = (Ct target-Ct internal control) experiment group-(Ct target-Ct internal control) normal control group. Each experimental group was repeated 3 times.

After treatment, the cells were extracted with lysis buffer (150 mm NaCl, 1% NP-40, 0.1% SDS, 2 μg/mL aprotinin, 1 mm PMSF) for 30 min at 4°C. The supernatants were centrifuged at 12,000 g for 15 min at 4°C. The supernatant containing total protein was harvested. Aliquots containing 50 μg of proteins were separated by a 12% SDS-PAGE and transferred to PVDF membranes at 60 V or 40 V for 2 h at low temperature. The membranes were soaked in blocking buffer (5% skimmed milk) for 2 h. Subsequently, proteins were detected using primary antibodies at 1:500 or 1:1000 dilution for overnight at 4°C, then visualized using anti-goat or anti-rabbit IgG conjugated with peroxidase (HRP) at 1:6000 or 1:8000 dilution for 2 h at room temperature. The EC3 Imaging System (UVP Inc. Upland, CA, USA) was used to catch up the specific bands, and the optical density of each band was measured using an Image J software (NIH, Bethesda, MD, USA). The rate between interesting proteins and GAPDH of the same sample was calculated as relative content and expressed graphically.

After treatment, the cells were fixed with 4% paraformaldehyde at room temperature for 15 min. After washing with PBS, cells were permeabilized with 0.2% Triton X-100 for 5 min. Sections were incubated in a blocking buffer containing 5% BSA for 30 min at room temperature, followed by incubation with anti-FGF9 (1:200) antibody overnight at 4 °C. Secondary antibodies labeled with fluorescein (1:500, Abcam) were applied for 120 min. After incubating with 0.1% DAPI for 10 min and another washing step with PBS, images were captured on a wide field fluorescent microscope (Olympus, Japan). Each experiment was repeated three times (n=90 cells) and the fluorescence intensities of the images were quantified with ImageJ software.

For cell proliferation studies, osteoblast was seeded at a celldensity of 105 cells/well on the samples placed in the wells and also on the polystyrene surface of the well in a 24-well tissue culture plate (TCP). The plate material was taken as the positive control in this study. The proliferation of osteoblast on the sample surfaces was measured after 24 h, 48 h, 72 h by MTT assay. The samples with attached cells were incubated in a mixture of 360 μL of PBS (phosphate buffer saline) and 40 μL MTT solution (5 mg/mL in PBS) for 4 h at 37 °C in 5% CO2 atmosphere. The intense red colored formazan derivatives formed were dissolved in 400 μL dimethyl sulfoxide for 15 min and the absorbance was measured with a microplate reader at a wave length of 590 nm.

The cells from each group were thrice-washed with PBS and lysed with 0.1% Triton X-100 using 3 cycles of freezing and thawing to verify that the cells were completely lysed. The cell lysates were centrifuged at 15 000 g for 5 min at 4℃, and the supernatant was collected. 50 μl of cell lysate was transferred to a 96-well plate and 150 ml of pNPP (Sigma-Aldrich, Inc.Irvine, UK) was added to each well as substrate for 20 min at 37℃. p-NP was quantified based on the spectrophotometric absorbance at 405 nm. ALP activity was normalized to the total protein concentration for each sample using a BCA protein assay (Pierce Biotechnology).

1 ml 0.1% Gelatin Solution was added into each well of 6 well plates and shook gently to cover the bottom. They were placed at room temperature for 30 min and then Gelatin Solution was discarded and let the plates air-dry. The cells were cultured in the coated 6 well plates at 37°C with 5% CO2 for 24 h. The medium was discarded gently and 2 ml OriCell TM Sprague-Dawley (SD) Rat Mesenchymal Stem Cell Osteogenic Differentiation Medium was added into them. The inducing medium was changed for every 3 days and they were induced for 21 days. After that the cells were fixed and stained with Alizarin red. The cells were washed with PBS and fixed with 4% formaldehyde for 30 min. Then they were washed with PBS for 2 times and stained with Alizarin red for 3-5 min at room temperature. They were observed with inverted microscope.

Correlation between FGF9 and miR-182 in hallux valgus

To determine whether FGF9 is direct targets of miR-182, we performed luciferase reporter assay. Given that there was a potential binding site in the 3'-UTR of hFGF9 with miR-182, we validated the binding sites. Consequently, the relative luciferase activity of FGF9 104-111 bp site was distinctly diminished (P<0.01) in cells co-transfected with miR-182 double-stranded mimics. In addition, mutation with three consecutive base pairs of the miR-182 binding sites of FGF9 site manifestly abolished the suppression of luciferase activity due to miR-182 over-expression. This shows fully convincingly that miR-182 inhibits FGF9 expression by directly targeting his 3'-UTRs (Figure 2).

The influence of FGF9 on osteogenic potential 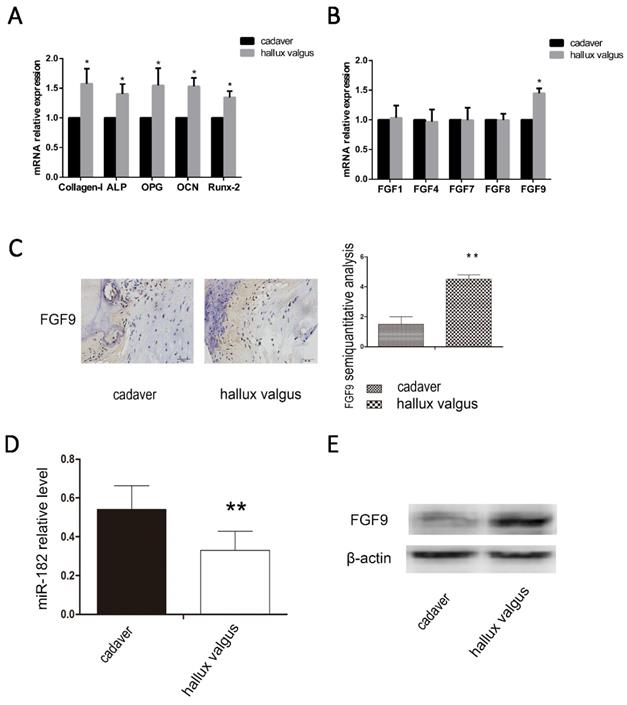 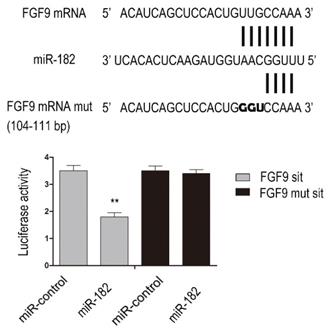 Hallux valgus is a very common disease. But the molecular biology mechanism of hallux valgus is not clearly understood. In this study, we explored the function of miR-182 and FGF9 in hallux valgus region bone tissue, and verified these findings in osteoblasts.

miR-182 regulates FGF9 in osteoblasts. (A) Lentivirus expressing miR-182 could be stably transfected into osteoblasts. real time-PCR analysis showed that miR-182 was down-regulated while FGF9 mRNA is down-regulated; in addition miR-182 is up-regulated while FGF9 mRNA was up-regulated. (B) miR-182 regulates FGF9 in osteoblasts. Western blot analysis shows expression of FGF9 protein in ant-LV-pre-miR-182 group is stronger than LV-pre-miR-182 group. No statistically significant difference between the other groups. (C) Immunofluorescence of FGF9 in hFOB1.19 cells. (D)Western blot analysis of FGF9 expression in transfected hFOB1.19 cells. n=5 per group. Data are means ± SD. *P < 0.05, **P < 0.01. 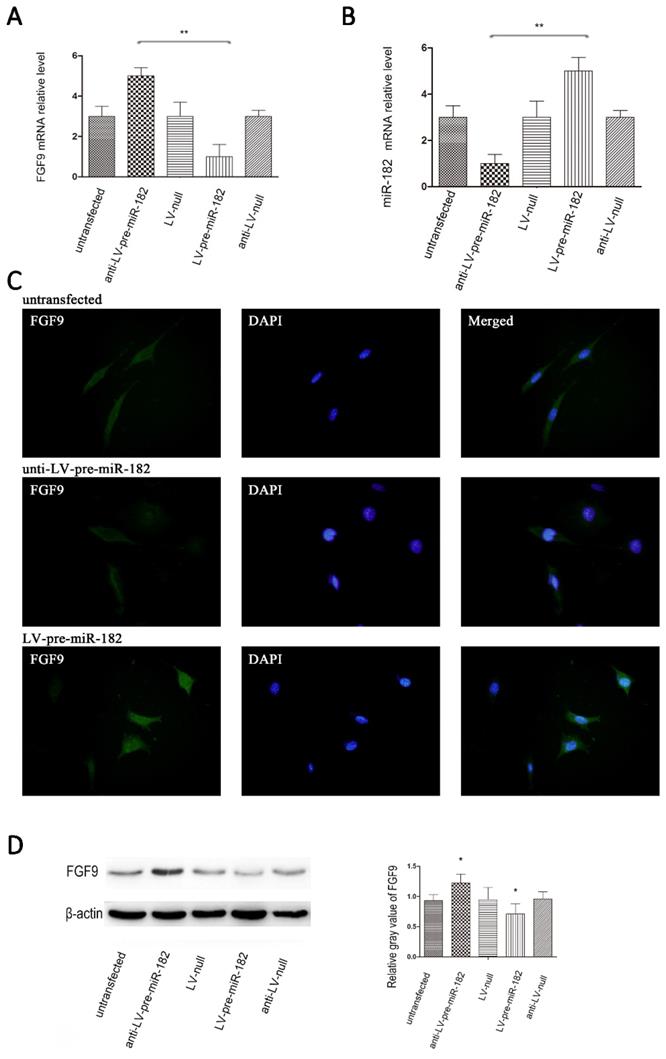 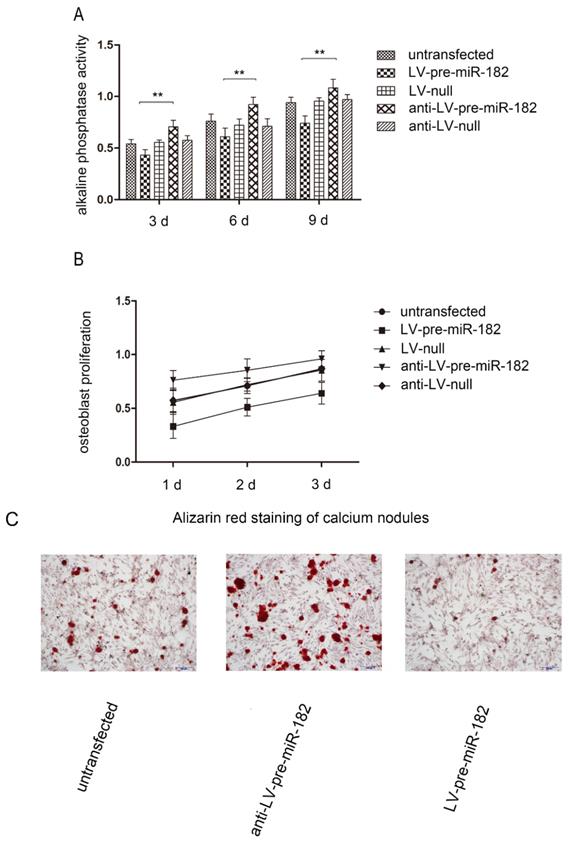 Excessive osteophyte formation is the main factor causing hallux valgus and inflammation, but the underlying causes need to be further elucidated. By analyzing the tissue of hallux valgus patients and amputated patients, we found that the osteogenic indexes of hallux valgus patients were significantly increased, which confirmed our conjecture. Previous studies have pointed out that FGF stimulation of bone tissues that overlie the head of the first metatarsal is a potential inducement of the hallux valgus and bunion formation 2. Therefore, we hypothesized that FGF may be the key to solving this problem. We found a significant increase in FGF9 expression in the FGF family by tissue examination in patients with hallux valgus. FGF9 is involved in bone formation and development. Existing research shows that FGF9 plays an important role in multiple synostosis syndromes (SYNS) [18] and promotes the formation of bone [19]. FGF9 can combine with FGFR-2 and up-regulate the process of subperiosteal ossification. We verified the conjecture by measuring the expression of FGF9 at hallux valgus region. The result shows that FGF9 expressed in hallux valgus region bone tissue was significantly higher than normal bone tissue.

Then we focus on the miRNAs expressed in hallux valgus. It has been previously reported that miR-182 plays a role in a wide variety of diseases, including liver cancer, lung tumor and breast cancer [20,21]. There is evidence to show that miR-182 can inhibit the activity of osteoblasts [22]. However, no previous study has investigated the relationship between miR-182 and hallux valgus. For the first time, we show of the biological connection between miR-182 and hallux valgus. miR-182 expression levels in hallux valgus region bone tissue were notably lower than those of normal bone tissue. That providing a new direction for future therapies.

We consider the main pathogenic factor of hallux valgus to be osteophyte formation. Excess osteophyte formation and enhancement of osteogenesis function as well as increased bone density has a strong correlation [23]. We chose indicators such as alkaline phosphatase, number of calcium nodules and osteoblast proliferation to observe how FGF9 affects osteogenesis in osteoblasts. The results showed that FGF9 enhanced the osteoblasts proliferation. To our knowledge, this is the first time that it has been demonstrated that FGF9 has a direct function in osteoblasts.

We have demonstrated for the first time that FGF9 is a novel target of miR-182 and that miR-182 promotes the formation of bone by targeting FGF9, implicating an essential role of miR-182 in the etiology of hallux valgus. Moreover, miR-182 might potentially be a therapeutic target for hallux valgus treatment.

3. Soulet L, Chevet E, Lemaitre G. et al. FGFs and their receptors, in vitro and in vivo studies: new FGF receptor in the brain, FGF-1 in muscle, and the use of functional analogues of low-affinity heparin-binding growth factor receptors in tissue repair. Mol Reprod Dev. 1994;39(1):49-55