Conclusions: Our results demonstrate that propofol rather than isoflurane accelerates the ISF drainage in the deep rat brain, which provides novel insights into the selective control of ISF drainage and guides selection of anesthetic agents in different clinical settings, and unravels the mechanism of how general anesthetics function.

The ECS is the space between adjacent neural cells in the brain, occupying approximately 15-20% of whole brain volume [5]. The ECS plays a critical role in maintaining brain function and physical properties despite its irregular, tortuous, and narrow features [5-8]. The ISF comprises 12-20% of whole brain water and drainages along the ECS [9]. It provides a direct living microenvironment for brain cells, delivers neurotransmitters and pharmaceutical agents, and clears metabolic waste products from the brain parenchyma [5,9-11]. Drugs administered into the ECS can directly bypass the blood-brain barrier and be transported along the ISF to target brain areas directly [12,13]. Therefore, it is of great clinical relevance to investigate factors affecting brain ECS structure and ISF drainage.

Propofol (2, 6-diisopropylphenol) is a widely used systemic anesthetic that acts on γ-aminobutyric acid type A (GABAA) receptors, glycine receptors, nicotinic acetylcholine receptors, and N-methyl-D-aspartate (NMDA) receptors [14-16]. Moreover, propofol can suppress locus coeruleus (LC) neuronal activity, which may contribute to the inhibition of norepinephrine (NE) release [17]. Isoflurane is an inhaled anesthetic that can target various receptors like GABAA receptors, and NMDA receptors to induce anesthesia [18]. Isoflurane increases NE release in the deep rat brain when inhaled at a concentration of about 1.8% [4,18-20].

In the present study, tracer-based magnetic resonance imaging (MRI) and fluorescent-labeled tracer assay were employed to quantify ISF drainage in the anesthetized rodent deep brain. Pysiologic parameters of the anesthetized rats in separate groups were monitored. The caudate-putamen (CPu) and thalamus (Tha) of deep brain areas were selected for detection. Ultimately, our results provide conclusive evidence that propofol does accelerate the ISF drainage in the deep rat brain compared with isoflurane. This finding will provide novel insights to guide the selection of anesthetic agents in specific clinical settings.

All animal studies were approved by the Peking University Biomedical Ethics Committee (approval number: LA201461) and were performed in accordance with the Helsinki Declaration and the National Guidelines for the Care and Use of Laboratory Animals. Rats were housed individually in a 12:12 h light/dark cycle under controlled temperature (22 ± 1 °C) and humidity (60 ± 5%), with food and water available ad libitum.

Adult Sprague-Dawley rats (250 to 300 g) were anesthetized with isoflurane or propofol, respectively (Figure 1A). There were six rats in each group. Isoflurane (Macklin, Shanghai, China) anesthesia was started at 4% induction with 1.5 to 1.8% maintenance delivered in a 1:1 oxyen:air mixture through a tube in a breathing mask. Exhaled gas from the rats was led from another tube of the breathing mask to be actively absorbed by a gas recovery tank. In the propofol groups, rats were intraperitoneally anesthetized with 60 mg/kg propofol (AstraZeneca S.p.A., Milan, Italy) and maintained with a continuous infusion of 0.6 mg/kg/min delivered via a subcutaneous catheter. Rats in the propofol anesthesia groups were exposed to the same 1:1 oxyen:air mixture as the isoflurane group. The subsequent experiments were conducted when rats lost the righting reflex. The two anesthetics were used in an equipotent dose/concentration during the experiments. A heating pad was used to maintain the body temperature of rats at 37 ± 0.2 °C.

Tracer Injections into the Rat Brain

Image analysis and post-procedure image processing were performed as described previously [10,22,23]. For each rat, MRI scanning was performed before and after Gd-DTPA injection (Figure 1B). Time points of scanning were set at pre-injection and post-injection until the “bright region” faded. All post-injection images were subjected to rigid transformation, similarity measurements, high-order interpolation, and adaptive stochastic gradient descent optimization (Figure 1B). These images were then subtracted from the pre-scanned images. The acquired “bright areas”, which were obtained by establishing a seed point and a threshold in the regions of interest, were assumed to be related to the presence of the tracer. New sets of post-processed MRI images in the horizontal, sagittal, and coronal planes with slice thicknesses of 1 mm were generated by the software. The signal intensity within the target area of the processed images was measured and denoted by ΔSI after the co-registration and subtraction process, which can be used to calculate diffusion parameters in the rat brain ECS.

1.5 h after stereotaxic injection of LYCH, the rats were sacrificed and intracardially perfused with 0.9% saline followed by 4% paraformaldehyde (PFA) for 15-20 min. The brains were then excised and post-fixed in 4% PFA overnight. Next, sagittal position brain slices with a thickness of about 1mm, which can facilitate simultaneous viewing of the CPu and Tha in the same slice, were obtained using a rat brain mold. Then, the slices were put onto glass slides, mounted with coverslips, and examined immediately with a confocal laser scanning microscope (TCS SP8 MP, Leica, Germany) using excitation at 488 nm and reflection at 633 nm under the 25 × objective with additional zooming. Image acquisition and data processing were performed under the same conditions and the maximum distribution area of LYCH in each slice was calculated (Figure 1C).

Schematic diagram of the experiments. (A) All rats were anesthetized with isoflurane (ISO) or propofol (PRO). (B) MRI was performed before and after injection of Gd-DTPA into the rat CPu or Tha. After a series of operations, post-processed MRI images were obtained [3]. (C) Schematic diagram of fluorescence-based assays. After injection of LYCH into the CPu or Tha, rats were perfused and brain tissue was processed and subjected to confocal imaging. 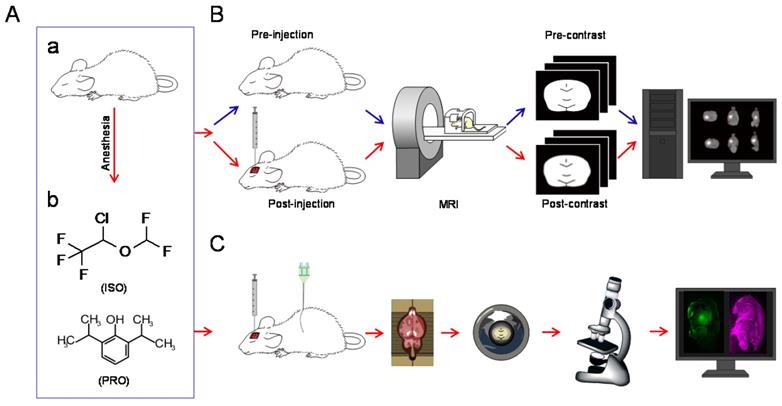 ISF Drainage in the CPu and Tha

Effects of Propofol and Isoflurane on the Vasomotor Function of Rats

Propofol Can Accelerate the ISF Drainage

The tracer-based MRI studies described above suggest propofol can accelerate ISF drainage in the deep rat brain compared with isoflurane. To corroborate this phenomenon, we conducted fluorescent-labeled tracer studies. After the rats were anesthetized with propofol or isoflurane, LYCH was injected into the CPu or the Tha of rats as noted above (Figure 4A-E) and the maximum distribution area of LYCH in each sagittal position brain slice was calculated and compared among the groups (Figure 4). In line with the tracer-based MRI studies, the maximum distribution area of LYCH in the propofol groups was much larger than that in the isoflurane groups both for CPu (12.58 ± 0.82 vs 7.71 ± 0.27, P < 0.001; Duncan's tests; n = 6) and Tha (16.75 ± 0.46 vs 11.97 ± 0.59, P < 0.001; Duncan's tests; n = 6) slices (Figure 4F). These results are consistent with the fluorescence and reflected light charts as well as the overlay charts of the two, where the maximum distribution area of LYCH in propofol is much larger than that of the isoflurane groups in both the CPu and Tha slices (Figure 4A-D). Similar to the tracer-based MRI results, the maximum distribution area of LYCH was much smaller in CPu sagittal brain slices compared to Tha under both isoflurane (7.71 ± 0.27 vs 11.97 ± 0.59, P < 0.001; Duncan's tests; n = 6) and propofol anesthesia (12.58 ± 0.82 vs 16.75 ± 0.46, P < 0.001; Duncan's tests; n = 6) (Figure 4G).

In this study, we observed that propofol significantly decreased tortuosity, increased ECS volume fraction, and accelerated ISF drainage in the deep rat brain when compared to isoflurane. ISF drainage is closely related to the cardiac cycle and respiratory cycle-associated pulsatility [25], and we record similar physiological parameters in rats anesthetized with propofol and isoflurane. Therefore, propofol and isoflurane cannot induce the tracer-based MRI and fluorescent-labeled tracer studies through influencing the vasomotor function in rats.

Propofol is a widely used intravenous anesthetic which can interact with GABAA receptors, glycine receptors and other neurotransmitter receptors to induce sedation and unconsciousness [15,17]. Moreover, propofol can decrease NE release by suppressing LC neuronal activity [17,27,28]. Isoflurane can bind to various receptors in the brain, including GABAA and NMDA receptors, to inhibit their function and induce alterations in behavioral and physiological states [2]. In contrast to propofol, isoflurane may induce NE release [18,19,29-32]. Indeed, the LC-NE system may indicate the specific mechanism of how NE levels change under different types of anesthesia. A previous study showed that propofol could suppress the spontaneous firing of LC neurons by increasing GABAergic inputs to these cells whereas the inhalational anesthetics may activate LC neurons by a gap junction-related mechanism [17]. 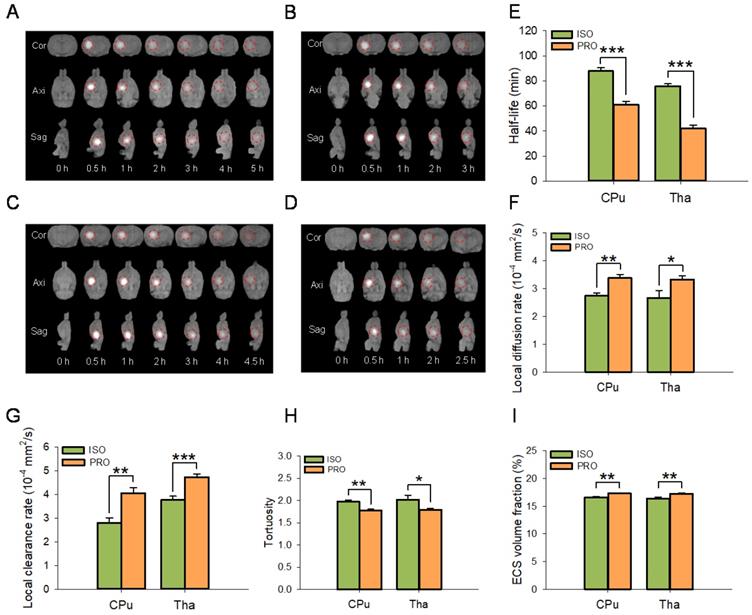 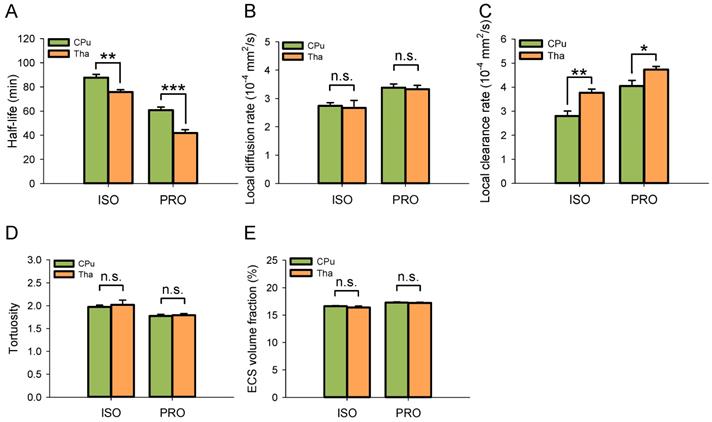 Physiologic parameters in rats anesthetized with PRO and ISO with operations performed in the CPu and Tha.

The heart rate, respiratory rate, systolic pressure, and SaO2 (%) in rats in the CPu or Tha injection groups under the two different anesthetics display no significant differences (P > 0.05; Duncan's test).

The differences in drainage of the ISF we observed could be attributable to the various effects of the two anesthetic agents on the release of NE, since NE levels are closely related to ISF drainage [3,33]. Therefore, propofol anesthesia, which could induce a lower NE level in the rat brain, would induce accelerated ISF drainage and more effective clearance of metabolites when compared with isoflurane anesthesia (Figure 5). Furthermore, isoflurane, as a volatile general anesthetic, may exert neurotoxic effects, which can alter ECS structure and slow ISF drainage [34]. Our findings could be helpful in selecting the appropriate anesthetic when clinical control over clearance of metabolic waste products and the transportation of pharmaceutical agents in the brain is required. Although the precise molecular mechanisms underlying the role of NE in ECS structure and ISF drainage still remain to be elucidated and the anesthetic dosages in this study cannot be easily extrapolated to clinical use, our study is invaluable and meaningful for anesthetics choices in clinical settings. 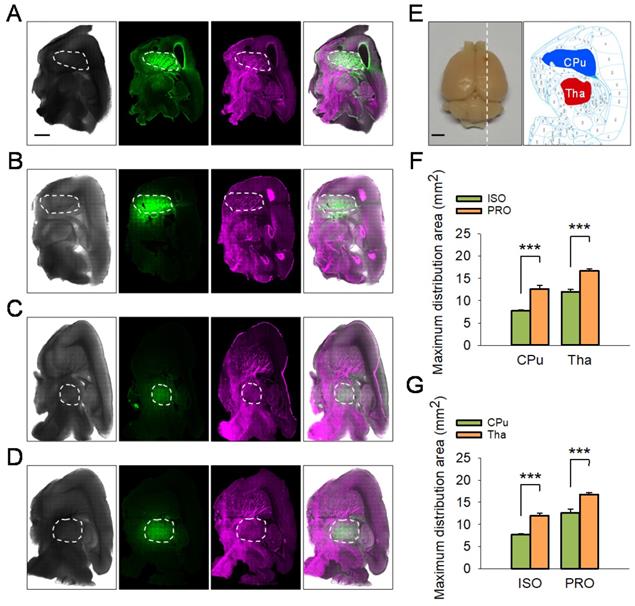 Schematic diagram of the effects of NE on the ECS and ISF in the deep rat brain. ISO increases the NE release in the CPu and Tha, leading to a decreased ECS volume fraction, decreased ISF drainage and eventual accumulation of metabolites. PRO can decrease NE release and increase ECS volume fraction, resulting in accelerated ISF drainage and more effective clearance of metabolites.

Collectively, in the present study, we demonstrated that propofol can significantly accelerate the ISF drainage in deep rat brain compared to isoflurane. The clinical implications of our study require further investigation.

8. Syková E. The extracellular space in the CNS: Its regulation, volume and geometry in normal and pathological neuronal function. Neuroscientist. 1997;3:28-41

10. Teng Z, Wang A, Wang P. et al. The effect of aquaporin-4 knockout on interstitial fluid flow and the structure of the extracellular space in the deep brain. Aging Dis. 2018;9:808-16