Papillary thyroid carcinoma (PTC) is the major subtype of thyroid cancer, accounting for 75%-85% of all thyroid malignancies. This study aimed to identify the association between the interactions of single nucleotide polymorphisms (SNPs) in RAS family genes and PTC in the Han Chinese population, to provide clues to the pathogenesis and potential therapeutic targets for PTC. Hap Map and NCBI-db SNP databases were used to retrieve SNPs. Haploview 4.2 software was used to filter SNPs based on specific parameters, six SNPs of RAS gene (KRAS-rs12427141, KRAS-rs712, KRAS-rs7315339, HRAS-rs12628, NRAS-rs14804 and NRAS-rs2273267) were genotyped by matrix-assisted laser desorption/ionization time of flight mass spectrometry (MALDI-TOF-MS) in 673 PTC patients and 657 healthy controls, the interactive effect was evaluated by crossover analysis, logistic regression and GMDR software.

Thyroid cancer is the most common malignant tumor of the endocrine system. Over the past 20 years, the incidence of thyroid cancer has increased dramatically worldwide [1]. In China, the changes in the incidence of thyroid cancer between 1988 and 2009 were from 1.78 to 6.56 per 100, 000 individuals [2]. Some believe that the improvement of socio-economic status, access to better health care, and the use of thyroid imaging led to the diagnoses of small, subclinical and stationary tumors with less impact on patients' has increased. However, epidemiological and clinical data suggests that a true increase in thyroid cancer cases has occurred [1].

It is worth noting that most of the increase in thyroid cancer diagnosis is due to the increase in papillary thyroid cancer (PTC), which accounts for 75%-85% of all thyroid malignancies [3]. PTC is a multifactorial disease affected by both genetic and environmental factors, such as radiation exposure, iodine or industrial compound intake [4]. However, its molecular mechanisms are still unclear.

Several studies have reported that the molecular pathogenesis of PTC is related to chromosomal rearrangement and point mutation of genes in the MAPK pathway [5]. The protein encoded by the RAS is a very important signaling factor in the MAPK pathway and performs pivotal roles in the development of many tumors, such as lung cancer, pancreatic cancer and colorectal cancer [6-9]. Furthermore, mutated RAS also accounts for the second most common mutation detected in biopsies from thyroid nodules which often results in malignancy [10]. The oncogene RAS of the mammalian has three members, namely HRAS, KRAS and NRAS. They are all composed of four exons, located on the short arms of human chromosomes 11, 12, and 1, respectively [11]. Their coded product is P21 protein, which plays an important role in cell growth, proliferation, and differentiation. They are related in structure and function.

The single nucleotide polymorphisms (SNPs) in the carcinogenesis-related genes might provide us a potential method to predict the risk and the prognosis of cancer. In our previous research, we found that variants in KRAS-rs712, KRAS-rs12427141 increased the risk of PTC [12]. Considering the biological interaction between HRAS, NRAS, and KRAS, we sought to explore the relationship between the interaction of RAS family genes mutations and PTC in a case-control study, which has not been explored before.

In the genetic interaction analysis, there are three commonly used methods. The first one is logistic regression, it is a parameter estimation method, the existence and the effect of interaction can be evaluated by the regression coefficient β3 of the product term (Y = β0 + β1G1 + β2G2 + β3G1 × G2) [13]. Du et al. conducted a multivariate logistic regression to analyze the impact of the interaction between miRNA-122 binding site polymorphisms and hepatitis B virus mutations on the risk of liver cancer [14]. However, when processing high-dimensional data, the number of observations relative to the independent variables is too small to estimate parameters accurately. In this case, non-parametric methods are required to be combined with them. Multifactor Dimensionality Reduction (MDR) is a widely used non-parametric method for analyzing interactions and was first proposed by Ritchie et al [15]. Generalized Multifactor Dimensionality Reduction (GMDR) is an extension of MDR, which also called score-based MDR. It follows the same algorithm framework, but substitutes the score values for the frequency, to evaluate the classification and prediction errors[16]. The basic idea is to transform the interaction effect between multiple SNPs to form a one-dimensional two-level variable, labeled as high-risk or low-risk, so it is easier to analyze the higher-order interaction [17, 18].

The third one is crossover analysis. Its results are more intuitive, and it can also make up for the fact that logistic regression cannot calculate the interaction under the additive model [19]. Therefore, the three methods in this study complemented each other to explore the relationship between the interactions of the six SNPs on RAS family genes and the susceptibility to PTC, attempted to provide hopeful potential clues for the prevention, diagnosis, or treatment of PTC.

673 patients with papillary thyroid cancer in China-Japan Union Hospital of Jilin University, China, from January 2012 to December 2014 were recruited as a case group. Each patient was diagnosed based on the Revised American Thyroid Association Management Guidelines and clinical-pathological sectioning. Patients with other cancer diagnoses were excluded. 657 healthy individuals without thyroid-related diseases from a cross-sectional survey of chronic diseases and risk factors among adults in Jilin Province from July to August 2012 were enrolled as the control group. Subjects with metabolic syndrome, thyroid-related diseases, other malignancy or mental disorders were excluded. Peripheral blood was provided by each participant for genotyping. The study was approved by the Ethics Committee of the School of Public Health, Jilin University, and written informed consent was obtained from all participants.

5 ml of peripheral blood obtained from each participant was stored in EDTA-containing tubes. Genomic DNA was extracted according to the instruction of the ClotBlood DNA Kit (Cwbio, Beijing, China). The DNA concentration was measured using the ultraviolet spectrophotometer (Beckman, USA). Genotypes were detected by iPLEX Gold reagent set (Sequenom, San Diego, CA, USA). The standard polymerase chain reaction (PCR) was performed and PCR products were assayed by matrix-assisted laser desorption/ionization time of flight mass spectrometry (MALDI-TOF-MS). The PCR primers were designed by Assay Designer 3.1 (Table 1). Samples that failed genotyping were removed from the analyses. The internal blinded quality control of the samples showed 97% consistency.

The Student's t-test or χ2 test was used to analyze age and gender differences between the PTC and NC groups. The Hardy-Weinberg equilibrium test was applied to each SNP in both groups. The associations of SNPs and PTC were tested using the Fisher exact test or χ2 test. The interaction between SNPs in different genes was evaluated by logistic regression, GMDR software (v0.7) and crossover analysis. All statistical tests were two-tailed. p<0.05 was considered statistically significant. For the Bonferroni correction on the p-values, we used p=0.05/6=0.0083 as a threshold of significance.

The Allele and Genotype Analysis

The PTC-related interactions between SNPs based on logistic regression

GMDR analysis of the interactions between the tag SNPs for PTC

It has been confirmed by academia that papillary thyroid carcinoma is a polygenic disease with complex etiology. As a high-quality potential biomarker for tumors, single nucleotide polymorphisms (SNPs) have been reported in many studies on the association with PTC, including rs965513, rs944289, rs1801516, rs2439302, rs10136427, rs7267944, rs2910264, rs966423, etc. [20-26]. However, emerging research has prompted us that most genes do not work independently, but often the superposition of the genetic susceptibility of multiple micro-effect genes, combined with the influence of environmental factors, finally contributed to the occurrence of disease. Some researchers have found that there are interactions between genes in many complex genetic diseases [27, 28]. Gene interaction refers to the clinical phenotypes not only depend on one pair of alleles but also affected by other non-allelic genes; also called cumulative effects, inhibitory effects, activation effects, ectopic dominant, modification, etc. 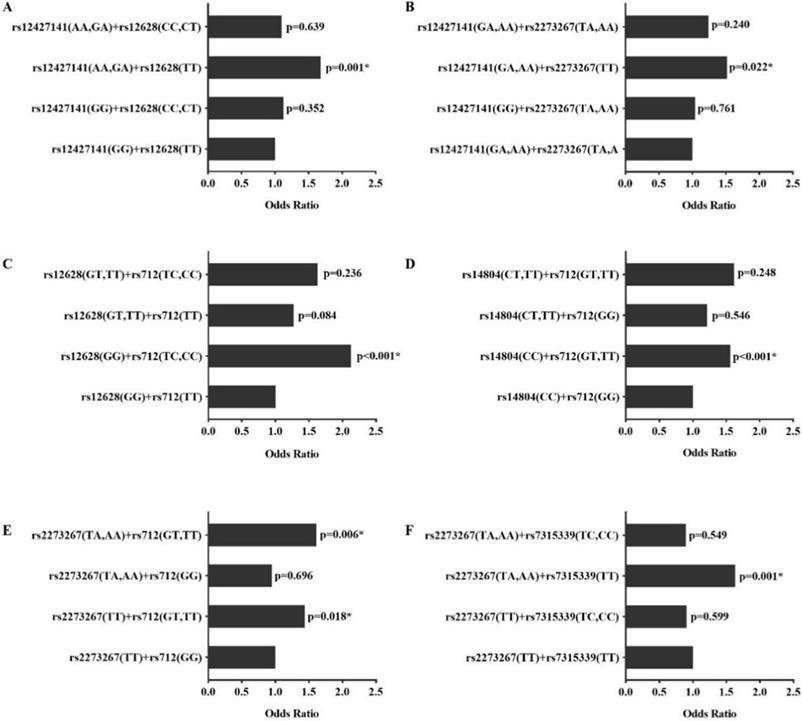 A combined model of interaction between RAS family genes. The left bar of the cell represents the case group, the right one is the control group. High risk and low risk are represented by dark gray and light gray respectively, a blank cell indicates no effect or no such genotype in the population. 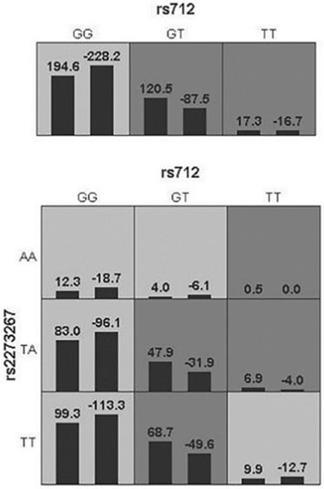 The RAS family genes are a class of proto-oncogenes that are very conservative during biological evolution, including KRAS, HRAS, and NRAS. They are closely related in function and structure, and both encode G proteins. The G protein can be combined with guanylate, it is inactivated when combined with GDP and activated with GTP. Therefore, RAS gene family can be regarded as a molecular switch, switching between two different conformations [29]. Elda Grabocka et al confirmed that cancer cells with KRAS mutations require wild-type HRAS to proliferate through mitosis, and the knockdown of wild-type HRAS and NRAS can enhance the DNA damage of cancer cells with KRAS mutations [30]. In view of the mutual influence of KRAS, NRAS, and HRAS in the performance of certain functions, we studied the effect of the interaction between RAS family genes on the susceptibility to PTC in the Han population. Six SNPs were selected with Haploview 4.2 according to the screening criteria, and the interactions of SNPs on different genes were calculated by three complementary approaches.

Our data suggested that the interaction between KRAS-rs12427141 and HRAS-rs12628 increased the risk of PTC, and the interaction between NRAS-rs2273267 and KRAS-rs7315339 reduced the risk of PTC. The interaction between KRAS-rs712 and NRAS-rs2273267 calculated by GMDR might also participate in the pathogenesis of PTC (p = 0.0107). It is worth mentioning that there are two interactive hypothesis testing methods for crossover analysis. One is to use the Excel calculation table constructed by Tomas Andersson, which calculates the 95% confidence interval of RERI [31]. Another is to calculate the statistic U according to the formula proposed by Rothman et al and look up the boundary value table [32]. We adopted the latter, that's why the p-value is a range rather than an exact value. However, statistical interactions do not necessarily indicate that there must be interactions in biology. How do they interact? Are these interactions merely involved in the normal pathogenesis of PTC or caused PTC? This study cannot explain yet, and we would continue to search for answers in future studies.

This study has some limitations. First, since the allele and genotype frequencies of SNPs strongly depend on ethnic background, large-scale studies with different ethnicities are still needed to validate our findings and explore the underlying mechanism of RAS gene family interactions in PTC development. Secondly, environmental factors such as iodine intake, radiation, and chemical products are also major driving forces for PTC development. In the next step, consideration should be given to incorporating the environmental factors in a more comprehensive interaction study with genes. Despite these limitations, this study is an extension of the previous work. To our knowledge, this is the first study to provide evidence for the association between PTC susceptibility and the interaction between RAS family genes, and parametric and non-parametric methods were used to complement each other to explore more possible interactions.

Clinical studies targeting RAS protein have been found to be highly successful for progression-free survival in patients with thyroid cancer [33], and the exploration of the SNPs interaction in complex diseases such as PTC might make a breakthrough in the pathogenesis of the disease, thereby making the way to intervene in the process of tumor development no longer single.

13. García-Magariños M, López-de-Ullibarri I, Cao R, Salas A. Evaluating the ability of tree-based methods and logistic regression for the detection of SNP-SNP interaction. Ann Hum Genet. 2009;73:360-9

29. Wittinghofer A, Pai EF. The structure of Ras protein: a model for a universal molecular switch. Trends in biochemical sciences. 1991;16:382-7