Methods: The methylation status of the MDM2 promoter was detected by methylation-specific PCR. The MDM2 expression levels were validated by quantitative real-time PCR. Enzyme-linked immunosorbent assay was used to determine the levels of interleukin-6 (IL-6) and tumor-necrosis factor-α (TNF-α) in plasma.

Hepatocellular carcinoma (HCC) is the major type of primary liver cancer, accounting for 85% of liver cancer cases worldwide [1]. HCC is the third leading cause of death from malignant tumors in the world, and the development of HCC is closely related to alteration in the structure or expression of certain oncogenes [2-4]. In China, chronic hepatitis B virus (HBV) infection is one of major causes of HCC [5]. To date, alpha-fetoprotein (AFP) has been used as HCC marker for more than 50 years, but its sensitivity and specificity are limited. It is particularly important to improve the diagnostic efficiency of HBV-related HCC. Therefore, there is an urgent need to search for a potential biomarker to diagnose HBV-related HCC.

Murine double minute-2 (MDM2) is an E3 ubiquitin ligase, and the gene encodes a negative regulator of the p53 tumor suppressor [6]. MDM2 binds to the transcriptional activation domain of p53 to regulate the stabilization and activation of p53 [7,8]. Under normal physiological conditions, MDM2 and p53 form a self-regulating negative feedback loop to ensure a balance between them [9]. However, the negative feedback loop is often observed to be broken in various tumors. MDM2 overexpression, in particular, has been implicated in several tumors, such as sarcoma, colon cancer and gastric cancer [10-12]. Previous studies have shown that MDM2 is an optimal target for therapy in tumors carrying wild-type tumor protein 53 [13-15]. Furthermore, MDM2 can regulate the target protein interleukin-6 (IL-6) and tumor-necrosis factor-α (TNF-α), which play an important role in regulating the mitogen-activated protein kinase (MAPK) and nuclear factor-kappa B (NF-κB) pathways [16].

Epigenetic modification, including aberrant DNA methylation, is one of the important events in carcinogenesis [17]. DNA methylation is a heritable change in gene expression without DNA sequence change [18]. DNA methylation is of great importance for gene expression and can have dire consequences for cells [19]. The overexpressed oncoprotein MDM2 not only binds to p53 and negatively regulates p53 but also contributes to HCC development, regardless of p53 status. A previous study has suggested that MDM2 hypomethylation and overexpression take place in pterygium [20]. DNA methylation has been widely investigated in a variety of tumors, such as gastric cancer and lung cancer [21,22]. Multiple studies have demonstrated that DNA methylation of some genes can be used as biomarkers for diagnosis, prognosis or therapeutic strategies [23,24].

All procedures performed in the studies involving human participants were in accordance with the Declaration of Helsinki and the ethical standards of the Medical Ethics Committee of Shandong University Qilu Hospital (NO. 2019058). Informed consent was obtained from all individual participants included in the study. The selection process of participants is shown in Fig. 1.

The modified DNA was amplified by MSP. The MDM2 promoter structure and MSP primer are shown in Fig. 2. The MDM2 primers for MSP were shown as follows: methylated forward primer 5'- TAACGGTTAAAGGAGTGTTATAGCG -3' and reverse primer 5'- GAAATAAAAATATTAACCGCGAAC -3'; unmethylated forward primer 5'-AATGGTTAAAGGAGTGTTATAGT-3' and reverse primer 5'-CAAAATAAAAATATTAACCACAAAC-3'. Each MSP contained 1 μL modified DNA, 0.5 μL forward and reverse primers (10 μM), 12.5 μL Premix Taq (Zymo Research, CA, USA), and 10.5 μL nuclease-free water. The PCR program included initial denaturation at 95 ºC for 5 min, followed by 35 cycles of 95 ºC for the 30 sec, 58.5 ºC for 30 sec, and 72 ºC for 30 sec; and a final extension at 72 ºC for 10 min. Water without DNA was used as the negative control. The separation of the 10 μL PCR products was conducted by electrophoresis on a 2% agarose gel, which was stained with Gel Red (Biotium, California, USA), and visualized under UV illumination. The MDM2 methylation status was determined positive if the MDM2 methylated primer or MDM2 methylated primer and MDM2 unmethylated primer both produced a band of expected size; otherwise it was negative. 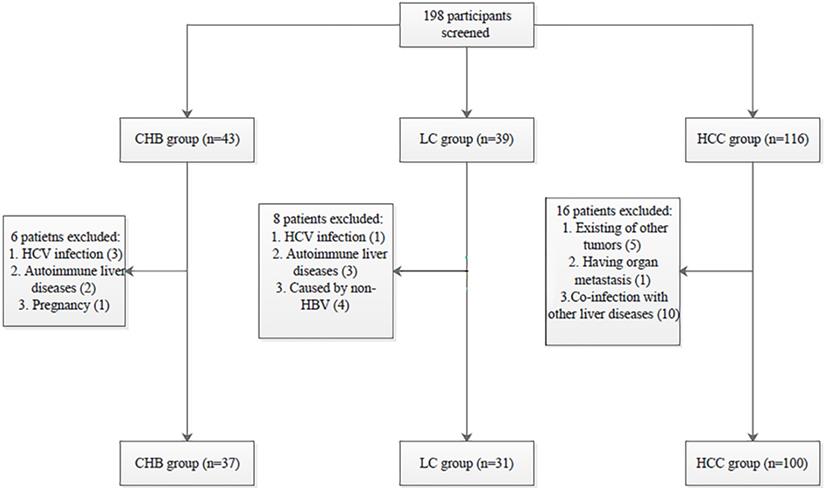 Statistical analysis was performed using SPSS version 19.0 software (SPSS, Chicago, IL, USA) and GraphPad Prism 6.0 (San Diego, CA, USA). The quantitative variables were expressed as median (centile 25; centile 75), and the differences between groups were compared using Mann-Whitney U-test or Kruskal-Wallis test. The categorical variables were expressed as number (%), and differences between groups were compared with Chi-squared tests. Associations of the MDM2 expression levels with the clinicopathological characteristics of patients were analyzed by the Spearman correlation test. In order to assess the diagnostic value of MDM2 promoter methylation, we combined MDM2 promoter methylation and the AFP to measure the area under the receiver operating characteristic (ROC) curve. The results were considered statistically significant when P<0.05.

Baseline characteristics of the patients

Association between mRNA levels of MDM2 in PBMCs and clinicopathological characteristics 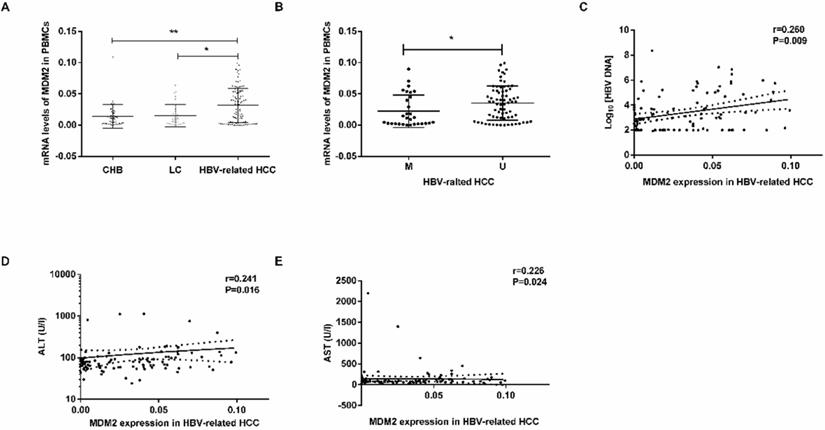 Plasma levels of IL-6 and TNF-α in patients 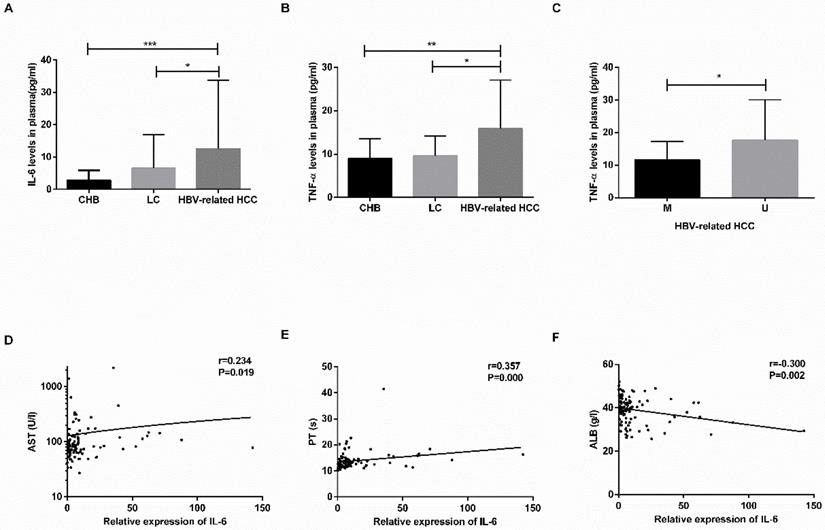 MDM2 overexpression leads to loss of p53 function, resulting in the occurrence of tumors [38]. In humans, MDM2 overexpression is common in many different tumor types, such as soft tissue tumor, osteosarcoma and esophageal cancer [39]. Gene promoter methylation can lead to repressions of transcription. In this study, we showed that HBV-related HCC patients have increased MDM2 mRNA levels. This result is compatible with previous study by Zhang et al [40]. We also found that MDM2 mRNA levels were negatively correlated with MDM2 gene promoter methylation status in HBV-related HCC. This finding confirms a previous study that gene promoter methylation usually leads to transcriptional silencing [41]. However, it has already known that there is a mechanism of p53 degradation that is not mediated by MDM2 [42]. E3 ubiquitin ligases (E3s) can be divided into the really interesting new genes (RING)-finger protein family and the homologous to E6AP carboxyl terminus (HECT) family. MDM2 and Pirh2 belong to the single-subunit RING finger E3s, COP1 belongs to the subunit of multiunit RING finger E3s, as well as Arf-BP1 belongs to the HECT family. Previous studies reported elevated levels of MDM2, Pirh2, COP1 and Arf-BP1 in HCC and other tumors compared with those in normal tissues [43-46]. COP1 and Pirh2 are negative regulators of p53 by ubiquitination independent of MDM2 and could be the predictors for HCC survival [47,48]. Arf-BP1 is also an E3 ligase of the p53-independent and p53-dependent in vivo [49]. Although these E3 ligases are involved in MDM2-independent p53 degradation, the roles of these ligases in the regulation of p53 and the usefulness in the diagnosis of HCC remain to be explored.

MDM2 promoted the production of TNF-α and IL-6 through the MAPK and NF-κB pathways [16]. IL-6 and TNF-α play an important role in the occurrence and development of tumors, including HCC [50]. The occurrence and poor prognosis of HCC are associated with the higher serum levels of IL-6 [51,52]. Elevated TNF-α levels are found in several cancer tissues, such as ovarian and renal cancers [50,53]. Blocking MDM2 has anti-inflammatory and anti-cancer effects [54-56]. In this present study, we observed that plasma IL-6 and TNF-α levels were significantly higher in the HBV-related HCC patients. The TNF-α levels were lower in the methylated MDM2 promoter group than those without. These results indicate a link between MDM2 gene promoter methylation and inflammatory factors elevation in HBV-related HCC.

There are some limitations to this research. First, our study was a retrospective single-center study. Further external validation with a large-sample, multiple-center is needed to verify the role of MDM2 promoter methylation as a biomarker. We should monitor the diagnostic value of MDM2 methylation. Second, there was a lack of liver tissues, therefore, we only performed this study in PBMCs. Third, we did not find alterations in MDM2 methylation in the CHB or LC patients from non-cancerous to cancerous diseases. However, the current report revealed the non-invasive early detection of HCC four years before conventional diagnosis using methylation biomarkers [60]. These results showed the great potential of methylation biomarker for predicting cancerous diseases in non-cancerous diseases. Therefore, whether unmethylated patients with CHB or LC are having risk should be verified in prospective cohort in the future. In addition, we only found that the MDM2 promoter methylation is a trend in HBV-related HCC, but the specificity of MDM2 promoter methylation for HBV-related HCC or non-HBV-related HCC should be noted and performed in the future study.

31. Kondo I, Iida S, Takagi Y, Sugihara K. MDM2 mRNA expression in the p53 pathway may predict the potential of invasion and liver metastasis in colorectal cancer. Diseases of the colon and rectum. 2008;51:1395-402