Methods: We first confirmed that IL-21 alters gene expression between CAVD aortic valve tissue and normal samples by immunohistochemistry, qPCR, and western blotting. VICs were cultured and treated with IL-21. Gene and protein expression levels of the osteoblastic markers ALP and Runx2, which can be blocked by specific JAK3 inhibitors and/or siRNA of STAT3, were measured.

Conclusion: Our data suggest that IL-21 is a key factor in valve calcification and a promising candidate for targeted therapeutics for CAVD.

Calcific aortic valve disease (CAVD) is a heart disease common in the elderly characterized by valvular calcification, fibrosis and inflammation. [1, 2]. It is a major public health problem in developed countries [3]. To date, no drugs have effectively prevented or altered the course of this disease and aortic valve replacement is the only effective treatment [4]. Although the pathologic mechanism of CAVD remains incompletely understood, it has been reported that CAVD is an active disease with multiple pathological changes that are similar to vascular calcification, including inflammation, osteogenesis, and mineralization [5]. Inflammation appears to play an essential role in the development of aortic valve leaflet calcification on the basis of pathology [6-8].

Valvular interstitial cells (VICs) and valvular endothelial cells are the most important cellular components of natural valves. There is abundant evidence that VICs play an important role in valvular calcification [9]. Meanwhile, VICs are heterogeneous group of fibroblasts [10]. When activated by pathological factors such as pro-inflammatory cytokines, mechanical stress, and changes in extracellular matrix composition, VICs can transform into myofibroblasts or osteoblast-like cells [10,11]. Multiple studies indicate that cytokines such as interleukin-6, as well as tumor necrosis factor-a (TNF-a), IL18, and HMGB-1 induce differentiation and mineralization of VICs [11, 12].

IL-21 is an inflammatory cytokine that belongs to the IL-2 class of cytokines. After binding to the IL-21 receptor (IL-21R) [13], the JAK/STAT signaling pathway is activated to induce inflammation. IL-21R is expressed primarily by immune cells, including T cells and natural killer (NK) cells. Notably, IL-21R is strongly expressed in rheumatoid arthritis-fibroblast-like synoviocytes (RA-FLSs) in rheumatoid synovial tissue [14, 15]. The IL-21/IL-21R axis contributes to the pathogenesis of RA-FLSs through activation of the JAK/STAT signaling pathway [16]. Interleukin-6 (IL-6)-activated JAK/STAT signaling induces osteogenic differentiation and mineralization of VICs. However, it is not known whether IL-21 promotes the osteoblastic differentiation of VICs. Therefore, we investigated the stimulatory effects of IL-21 on osteoblastic differentiation of VICs.

This study complied with the Declaration of Helsinki and was approved by the review boards of Union Hospital and Tongji Medical College (approval IORG0003571). A total of 20 patients with CAVD and 15 control patients who underwent heart transplantation were enrolled at Union Hospital from 2017 to 2019. All patients provided informed consent for the use of their clinical specimens for research. Patients with congenital aortic valve abnormality, rheumatic disease, or endocarditis were excluded. Demographic information is summarized in Supplementary Table 1. Tissue samples were kept frozen in liquid nitrogen until use. Their paraffin-embedded aortic valve tissue samples were collected for immunohistochemistry.

Human VICs were isolated and characterized as previously described [17]. Passages 3-5 were used in all experiments. Cells were cultured in DMEM containing 10% fetal bovine serum (FBS; Gibco, New Zealand), in a humidified incubator at 37 °C. When they reached 70-80% confluency, the medium was changed to DMEM containing only 2% FBS, the cells were cultured overnight, and treated with recombinant human IL-21 (PeproTech, USA). Other pharmacologic reagents, including 10 mmol/L WHI-P154 (purchased from Selleck Chemicals, USA), were added 2 h before the addition of IL-21. Cells from 3 patients were used for each intervention.

For mineralization experiments, VICs were seeded in 24-well plates. At 80% confluence, cells were incubated, per indicated interventions, in medium for 21 days. The medium was exchanged every 3 days during this culture period. Alizarin Red S staining was then conducted using a commercial Alizarin Red S staining kit (ScienCell #0223, USA).

Valve tissue samples were fixed with 4% paraformaldehyde and embedded in paraffin. Immunohistochemistry was performed to detect Alizarin Red S and IL-21 (ab5978, 1:100). Briefly, after dehydration, sections were boiled for 2 min in citrate buffer (pH 6.0) for antigen retrieval, followed by treatment with 3% H2O2 to block endogenous peroxidase activity. Subsequently, the sections were incubated overnight at 4 ºC with the primary antibodies, followed by incubation with an appropriate second antibody for 30 min at room temperature. DAB was used as a substrate for staining.

To inhibit STAT3, IL-21R expression, cultured VICs at 70-80% confluency were transfected with specific siRNA (100 nM) or scramble siRNA (100 nM) using Lipofectamine 3000 (Invitrogen, USA) according to the manufacturer's recommendations. After incubated (at 37 °C and 5% CO2) for 6 h, the medium was replaced with DMEM (Hyclone) containing 10% fetal bovine serum (Gibco, Invitrogen). After transfection, the cells were harvested at 48 h for RNA and protein extraction.

Data are expressed as means ± SEM. All experiments were independently replicated in cells from at least three different human aortic valves. Differences between multiple groups were evaluated via ANOVA with post-hoc analysis. P < 0.05 was considered to be statistically significant. All statistical analyses were performed using GraphPad Prism software for Windows.

IL-21 is expressed at high levels in calcific AV Leaflets

To identify additional cytokines that may promote CAVD pathogenesis, we analyzed IL-21 mRNA expression in calcific AVs from CAVD (n=5). We used qPCR to measure IL-21 expression in CAVD Leaflets from CAVD patients and healthy controls (Figure 1A). The immunofluorescence showed that CD3+ T cells and IL-21 were co-stained in the CAVD leaflets (Figure S1).

Then, we used immunoblotting and immunohistochemical staining to determine whether IL-21 are involved in calcific AV disease and found that the expression of IL-21 runx2 and ALP were markedly increased in calcific AVs, compared to normal controls (Figure 1, B-E). By immunohistochemistry, regions of IL-21 expression in diseased aortic valve samples were predominantly in areas adjacent to calcifications (Figure 1F). These results suggest that IL-21 plays a role in AV calcification.

Over the past decade, VICs have been widely considered to be the major source of osteoblast-like cells in calcified aortic valves. We found IL-21 to be expressed at high levels on the surface of VICs. To determine if IL-21 affects osteogenic differentiation of VICs, we treated VICs with IL-21 at 0.5, 10, 20, 50, and 100 ng/ml. After 3 days of stimulation, IL-21 increased the expression of the osteoblastic markers Runx2 and ALP in a dose-dependent manner (Figure 2A-C). We tested a single concentration of IL-21 (50 ng/ml) on VICs at 0, 24, 48, and 72 h). The expression of Runx2 and ALP increased in a time-dependent manner (Figure 2D-F). Their mRNA expression levels also significantly increased in the presence of IL-21 (50 ng/ml) (Figure 2G). To confirm whether IL-21 stimulation promotes matrix mineralization and calcium deposition in cultured normal VICs, we treated VICs with conditioned medium for 21 days and found a significant increase in calcium deposition (Figure 2H and I). 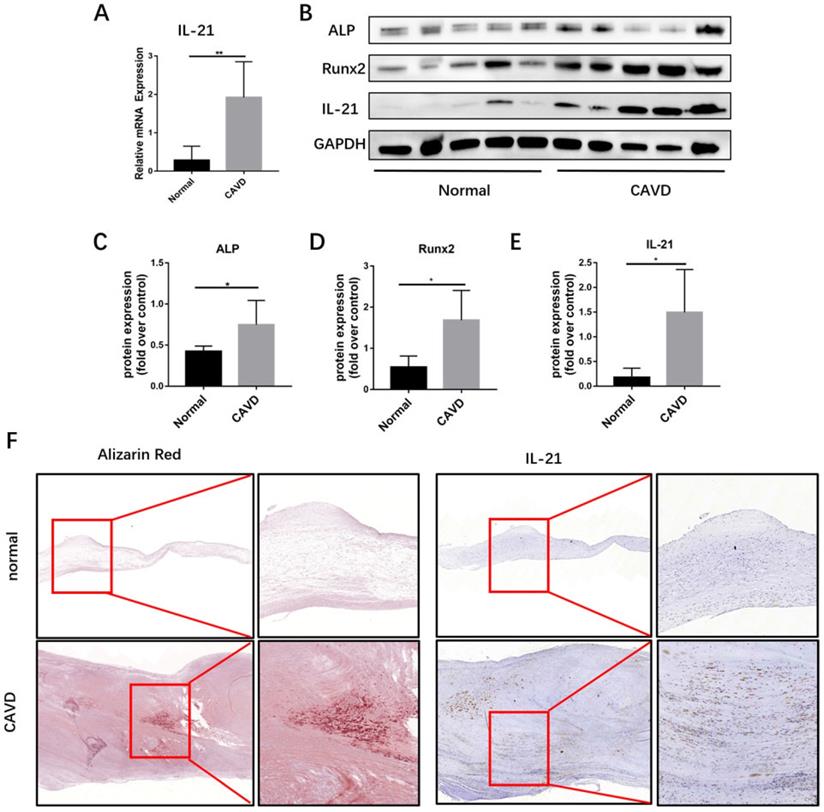 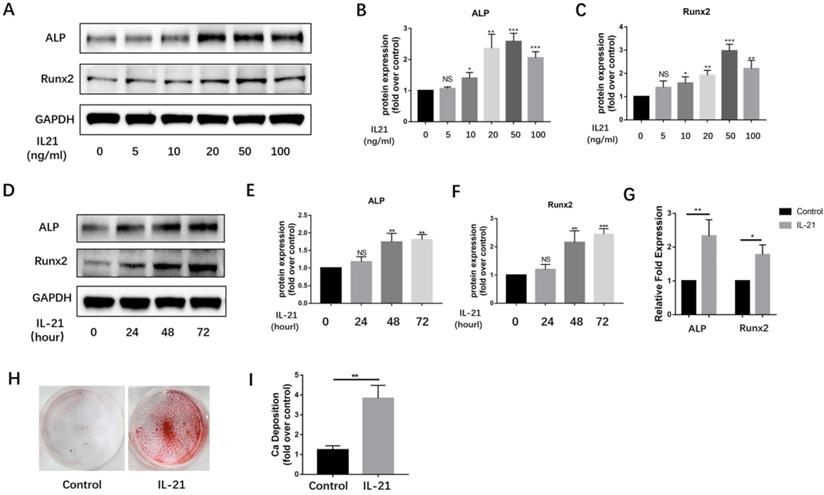 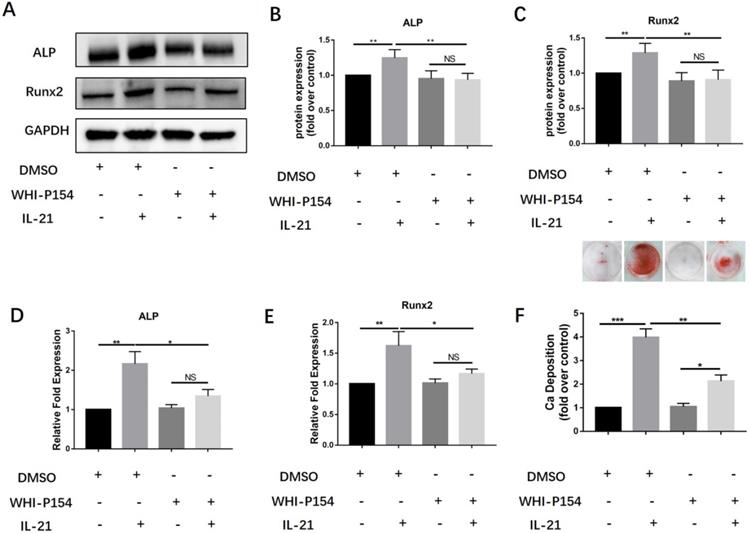 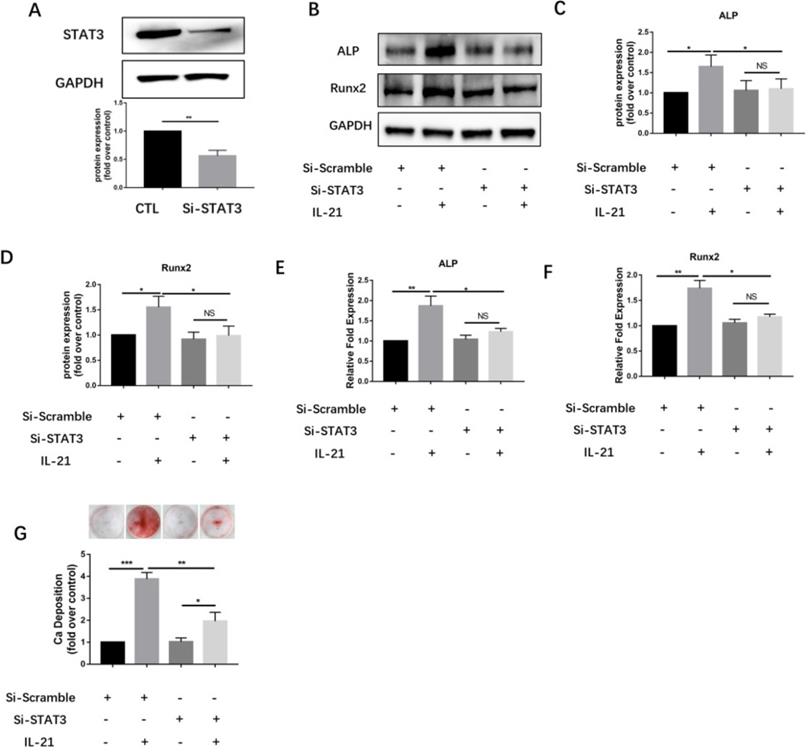 To further validate the JAK3-related STAT subsets, we designed siRNA sequences for silencing STAT3 gene expression. Immunoblotting showed that knockdown of STAT3 significantly downregulated expression of STAT3 protein (Figure 4A) and inhibited the IL-21-induced expression of the osteoblastic markers ALP and Runx2 (Figure 4B and D). Meanwhile, knockdown of STAT3 using siRNA significantly suppressed the induction of ALP and Runx2 mRNA in VICs (Figure 4E and F), and consistently, decreased matrix calcium deposition after stimulation with IL-21(50 ng/ml) (Figure 4G).

A large amount of evidence indicates the pathological processes of CAVD share mechanisms with ectopic ossification in cardiovascular system, including inflammation, angiogenesis, and ECM remodeling [18, 19]. CAVD is characterized by chronic inflammation of the aortic valve leaflet and infiltration by blood-derived immune cells, which show signs of activation and produce high levels of proinflammatory cytokines, including IL-6, IL-18 and TNF-α [20, 21]. Thus, it is important to understand the relationships between CAVD and proinflammatory cytokines.

Schematic of IL-21 promotion of osteoblastic differentiation of VICs through the JAK3-STAT3 pathway. 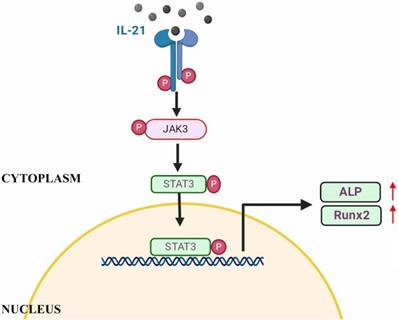 IL-21 is involved in several inflammatory disorders. Previous research has demonstrated that IL-21, IL-17, IL-23 can lead to severe valve damage [22]. The Th2 cytokines IL-4, IL-5, IL-13 and IL-21 each have distinct roles in the regulation of tissue remodeling and fibrosis [23]. IL-21 signaling was recently shown to promote fibrosis by facilitating the CD4+ Th2 response [24]. Therefore, we first found that the expression of IL-21 was markedly increased in calcific AVs. By immunohistochemistry, regions of IL-21 protein expression in diseased aortic valve samples were adjacent to areas of calcification. And IL-21R might also participate in the osteogenic differentiation of VICs according to our results. These results suggested that IL-21/IL-21R axis plays a role in the development of AV calcification.

IL-21 activates multiple signaling pathways, including the Janus kinase 1 and 3-signal transducer and activator of transcription (STAT3) pathway, the MAPK pathway, and the PI3K/AKT signalling pathway [25] through its receptor. Some studies have shown that members of the IL-6 family (IL-6, OSM) regulate osteoblastic differentiation of dental-pulp stem cells, human bone-marrow mesenchymal stem cells, and vascular smooth-muscle cells through the STAT3 pathway [11, 26]. STAT3 plays an essential role in heart protection [27]. It has been reported that cardiomyocyte-restricted deletion of Stat3 resulted in decreased myocardial capillary density and increased interstitial fibrosis [28]. Runx2 plays a central role in coordinating multiple signals involved in osteoblast differentiation [29]. STAT3 can physically interact with Runx2 to impair its transcriptional activity [30]. The study have shown that IL-21 enhances both RA-FLS proliferation and their production of IL-6 and TNF-a by STAT3 [31]. Since RA-FLS shared a similar phenotype with VICs in the context of IL-21R expression, based on these results we can deduce that IL-21 and JAK/STAT3 signaling play important roles in the osteogenetic differentiation of VICs. Further studies on p-STAT3 mediated binding to the ALP and Runx2 promoters are needed to characterize the nuclear localization signal.

So far, a tremendous amount has been learned about the actions of IL‑21 on a broad array of target cells, there are two general areas where the positive effects of IL‑21 are important. First, in cancer immunotherapy there has been a rapid progression from animal studies to clinical trials for several classes of solid tumours. Second, IL‑21-IL‑21R blockade may also have therapeutic benefit in the treatment of autoimmune diseases and inflammatory conditions [25]. According to our findings, targeting IL-21/IL-21R and JAK/STAT3 pathway might be an effective therapeutic method for CAVD which needed animal experiment verification.

In our study, we showed that IL-21 and JAK/STAT3 signaling increase mineralization of VICs, increasing expression of the osteogenic markers ALP and Runx2, which can be blocked by WHI-P154. We conclude from these findings that IL-21 promotes the differentiation of VICs into osteoblastic lineages and increases mineralization. It is hoped that IL-21 can be a potential target for CAVD therapy.

This project is attributed to the Department of Cardiovascular Surgery, Union Hospital, Tongji Medical College, Huazhong University of Science and Technology.