Biatrial enlargement as a predictor for reablation of atrial fibrillation

Purpose: We aimed to determine whether biatrial enlargement could predict reablation of atrial fibrillation after first ablation.

Methods: 519 consecutive patients with drug resistant atrial fibrillation [paroxysmal AF (PAF) 361, non-PAF 158] who underwent catheter ablation in Capital Medical University Xuanwu hospital between 2009 and 2014 were enrolled. Biatrial enlargement (BAE) was diagnosed according to trans-thoracic echocardiography (TTE). Ablation strategies included complete pulmonary vein isolation (PVI) in all patients and additional linear ablation across mitral isthmus, left atrium roof, left atrium bottom and tricuspid isthmus, or electrical cardioversion on the cases that AF could not be terminated by PVI. Anti-arrhythmic drugs or cardioversion were used to control the recurred atrial arrhythmia in patients with recurrence of atrial fibrillation after ablation. Reablation was advised when the drugs were resistant or that patient could not tolerate. Risk factors for reablation were analyzed.

Conclusion: Biatrial enlargement is an independent risk predictor for the reablation in atrial fibrillation patients after first ablation.

Atrial fibrillation (AF) is the most common sustained cardiac arrhythmia (1). Catheter ablation of pulmonary veins or left atrium have been proved to be superior to anti-arrhythmic therapy in reducing AF recurrence and maintaining sinus rhythm (3,4). However, pulmonary vein isolation (PVI) or PVI plus additional linear ablation is associated with a considerable recurrence rate (5). Despite that anti-arrhythmic drugs or cardioversion were used to control the recurred atrial arrhythmia, almost 10% patients had to accept reablation due to atrial arrhythmias that refractory to anti-arrhythmic drugs (6). Risk factors have been identified to predict the recurrence of atrial fibrillation after ablation, such as left atrial enlargement (LAE), right atrium diameter (RAD), atrial tissue fibrosis, and low-voltage areas detected by high-density electroanatomical mapping in left atrium (7,8,9,10,11). However, risk factors to predict the reablation in patients with recurrence of atrial fibrillation are still uncertain. Recent study (12) had found that biatrial volume were independent predictors of AF recurrence after PVI. However, the predictive value of atrial enlargement of reablation in patients with recurrence of AF is still unknown. In this study, we assessed biatrial enlargement as a predictor for reablation in atrial fibrillation patients.

All procedures were in accordance with the ethical standards of the responsible committee on human experimentation and with the Helsinki Declaration of 1964, which was revised in 2013. All experimental protocols were approved by the Institutional Review Boards of the Capital Medical University Xuanwu hospital. All participants provided written informed consent. 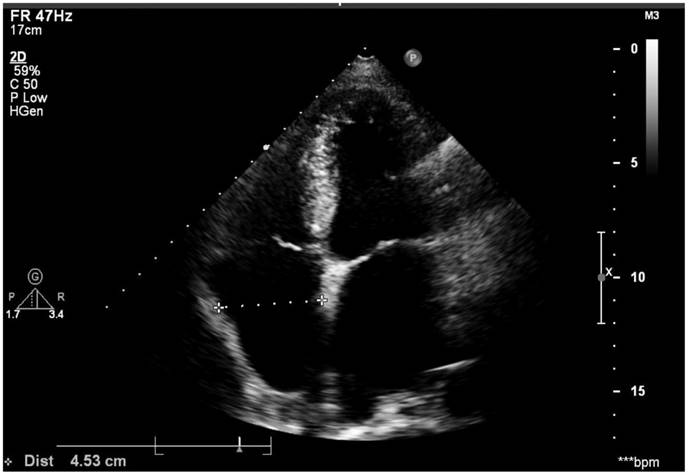 Antiarrhythmic drugs (AADs) were discontinued for at least five half-lives before ablation. Oral anticoagulation (warfarin) was discontinued 3 days prior to the procedure, and low molecular weight heparin was administered for bridging. The procedure was performed with patients under conscious sedation. First, a decapolar catheter was positioned in the coronary sinus through left subclavian vein. Then transseptal puncture was accomplished with Sanjude transseptal puncture needle (St. Jude Medical Inc.). Following completion of transseptal access, a bolus of unfractionated heparin is given (50 U/kg body weight) and repeated for procedures lasting longer than 4 h or if the ACT falls below 200 s. After that, a 3.5-mm irrigated ablation catheter (Biosense-Webster Inc, Diamond Bar, CA, USA) was advanced to the LA for mapping and ablation. Mapping and ablation were guided by a 3D electro-anatomical mapping system (CARTO, Biosense-Webster Inc.) or non-contact mapping system (Ensite NavX system, St. Jude Medical Inc). The sheath was continuously perfused with heparinized saline at 2-3 ml/h.

Circumferential pulmonary vein isolation (PVI) was carried out for paroxysmal atrial fibrillation (PAF) patients. For persistent or long-standing persistent AF patients, additional linear ablation across LA roof, mitral isthmus, LA bottom and tricuspid isthmus were carried out besides PVI. Procedure endpoint was PVI for PAF patients and complete block of the lines besides PVI for persistent or long-standing persistent AF cases. Electrical cardioversion was applied if the atrial fibrillation could not terminated by PVI plus additional linear ablation. The specific definitions to PVI and linear block were detailed in previous report (14).

After discharge, patients were followed by their referring cardiologist. During the first three postoperative months, anti-arrhythmic drugs such as amiodarone or propafenone or sotalol were used for every patient. Patients with AF recurrences which were drug resistant were advised to undergo electrical cardioversions within 3 months after ablation (blanking period). A 12-lead ECG was obtained at 3, 6, and 12 months in all patients. Patients with no recurrence and a CHADS-VASC score <2 stopped taking warfarin 3 months following the procedure. Anti-arrhythmic drug was stopped 3 months after ablation if a patient had no recurrence of atrial tachyarrhythmia. Recurrence of AF was defined as AF or atrial tachycardia lasting >30 seconds after blanking period. Anti-arrhythmic drugs were used for recurrence of atrial arrhythmia after blanking period. Reablation was advised when the drugs were resistant or that patient could not tolerate. Anticoagulation strategy was strictly carried out according to CHADS-VASC grading system for each patient.

For baseline characteristics, the Kolmogorov-Smirnov test was used to test the normality of distribution. Continuous variables are shown as mean ± standard deviation (SD) and compared using a two-tailed Student t test, while medians (Q1, Q3) and Mann-Whitney U tests were used for non-normally distributed variables. Categorical data are reported as counts and percentage (%) and between-group comparisons were made using the Pearson Chi-square or Fisher exact test. Variables that were statistically significant in univariate regression models (P value <0.1) were included in multivariate binary logistic regression model using a “forward conditional” method to determine whether they remained significant after adjustment for potential confounders. Risk factors associated with reablation were determined by a Cox regression model. All tests were two sided and P values <0.05 were considered statistically significant. Analyses were performed by IBM SPSS 25 (SPSS, IBM, Armonk, NY, USA).

Characteristics of the study group

According to right atrium diameter and left atrium diameter, patients were divided into two groups, Biatrial enlargement group (BAE, n=100) and non-Biatrial enlargement group (Non-BAE, n=419). The overall procedural outcome and clinical characters were listed in the Table 2. As in the Table 2, the procedure time was longer, and the proportion of persistent AF, PVI plus additional linear ablation, electrical cardioversion, recurrence and reablation were higher in BAE group.

Clinical characters between BAE and Non-BAE

Comparison between the two groups of patients with recurrence of AF

Association of reablation with clinical characters

Correlations of reablation with clinical characters

In order to determine the effects of left atrium diameter on the reablation, we carried out subgroup analysis based on BAE (100/519) in patients with LAE (287/519). We found that procedure time, left atrium diameter, LVEF, heart failure, recurrence, reablation were different significantly between LAE only and BAE patients. See Table 6.

Subgroup analysis based on BAE in patients with LAE

Multivariate Cox regression analysis of reablation among the patients with LAE 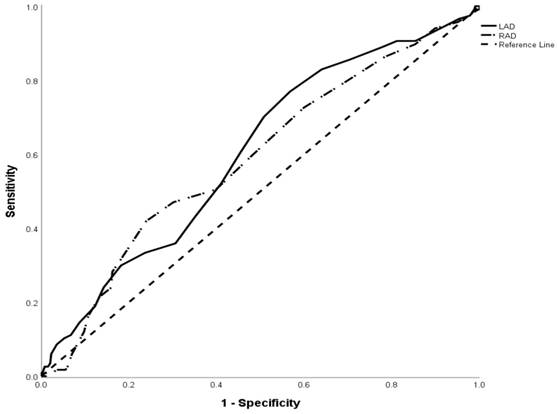 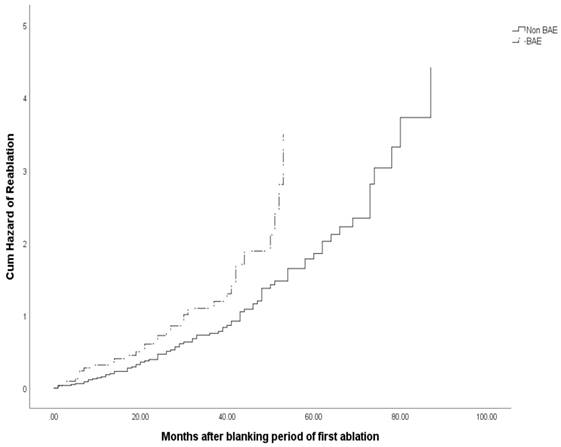 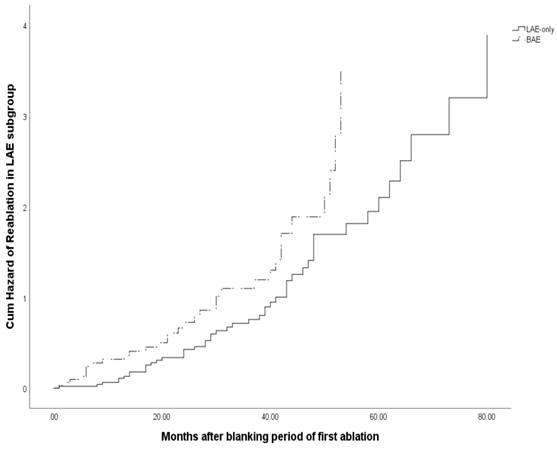 Left atrium size and right atrium diameter were found to be associated with recurrence of AF after catheter ablation (7, 8, 9, 18). In our study, there were 170 patients that recurred atrial arrhythmias, including paroxysmal AF, atrial flutter, atiral tachycardia. Some of them could be controlled by anti-arrhythmic drugs, and for these patients, anticoagulation strategy was strictly carried out according to CHADS-VASC grading system. In the reablation, we found that ablation of pulmonary veins and lines in left atrium could terminate most of recurred atrial arrhythmias. Thus, gaps in pulmonary veins and incomplete block of left atrium ablation lines led to the recurrence of atrial arrhythmias in most patients in our data.

Although redo AF ablation was substantially more effective than AAD in reducing the progression and prevalence of AF after the failure of an initial ablation (19), it was not everyone who had recurred AF after catheter ablation that needed reablation, especially for those patients that atrial arrhythmia could be well controlled by anti-arrhythmic drugs. Recent multicenter clinical research in Europe had demonstrated that 9% of patients received a repeat ablation after PVI and 11% of patients were re-ablated after PVI plus additional lines or CFAE in left atrium. The proportion of the use of anti-arrhythmic drugs was decreased after first ablation and almost 32%-34% of patients used anti-arrhythmic drugs at 12 months follow up (6). In our data, almost 70% (117/170) of patients with recurred atrial arrhythmia underwent reablation. The reason lay in that our follow up time was longer (33.11±21.45months VS 12 months) and the constituent ratio of the patients were also different.

Receiver operating characteristic (ROC) curves was built to establish the values that represented the cutoff point of RAD and LAD to predict reablation. We found the cutoff values of LAD and RAD were both 38.5 mm. According to TTE, LAE was diagnosed when LAD was above 40mm for male and 35mm for female, while RAE was diagnosed from that RAD was above 40mm regardless of sex. From ROC curve, we knew that the sensitivity of prediction of reablation for LAD 35mm (diagnose of LAE for female) was 88.9% and the specificity was 22.4%. While for male, the sensitivity of the LAD 40mm (diagnose of LAE for male) was 60.7% and the specificity was 54.5%. However, the sensitivity of prediction of reablation for RAD 40mm (diagnose of RAE regardless of sex) was 28.2% and specificity was 83.8%. Since the AUC was not so large (only 0.603 for LAD), the strength of prediction power for reablation for diameter of atrium was only moderate.

As left atrium enlargement was independent predictor for occurrence of AF after first or repeat ablation (8, 18), we did the subgroup analysis based on the BAE in LAE patients to evaluate the effects of left atrium diameter on the reablation. We found that left ventricular ejection fraction was decreased (BAE 63(55, 68) VS LAE-only 66(60, 70) P=0.001), and heart failure were more common (BAE 18/100 VS LAE-only 9/187, P=0.000), which meant that left ventricular systolic function was even worse for BAE patients. Also, persistent atrial fibrillation, additional lines ablation besides PVI and electrical cardioversion were more common among these patients in the first ablation process. Multivariate Cox regression analysis showed that BAE (HR 1.620, 95%CI 1.020-2.574, P=0.041) was an independent predictor for reablation among the patients with enlarged left atrium. Kaplan-Meier survival analysis demonstrated that BAE was also associated with more reablation (Log rank P=0.026) in these patients.

This was retrospective study and was only a single institutional study. For criteria of reablation, we had to take the patients' desire into consideration, thus subjective factors would affect the result. In our data, reporting and selection bias could not be fully excluded. All comparisons between groups have to be interpreted with caution because PVI plus additional lines may have been performed more frequently in patients with more extensive substrate who would have had an even poorer prognosis with a PVI approach. Due to the non-standardized arrhythmia screening success rates may be overestimated.

Biatrial enlargement (BAE) is an independent predictor for reablation in atrial fibrillation patients and is associated with reablation in our follow up.