Cortisol, a kind of glucocorticoid hormone, plays important roles in many metabolic processes. Environmental factors and some prevalent non-communicable diseases such as obesity can disturb the cortisol regulatory and effector pathways [1]. Hypercortisolism is linked to various diseases, including diabetes, obesity, hypertension, dyslipidemia, osteoporosis, arteriosclerosis, and cardiovascular disease [2, 3, 4]. The prevalence of hypercortisolism is higher in patients with diabetes than in the general population [5]. Cortisol level was found to be positively associated with glycated hemoglobulin (HbA1c), independent of diabetes medication use [6]. However, results concerning the relationship of cortisol and cardiometabolic components were inconsistent. Some studies showed negative or opposite results, especially when recruiting patients with lower BMI values rather than overweight or obese patients [7, 8]. Therefore, we consider it necessary to evaluate the hypothalamic-pituitary-adrenal axis (HPA) activity in patients with a broader range of BMI values who were diagnosed with type 2 diabetes (T2DM) or prediabetes.

Besides the traditional cardiometabolic factors, cortisol secretion is also suggested to correlate with renal function in a few studies [9, 10]. Serum cortisol level was negatively correlated with eGFR levels in patients with essential hypertension. Non-suppressing cortisol with a low-dose dexamethasone suppression test was found to be associated with the presence of microalbuminuria in patients with metabolic syndrome (MetS) [10]. But evidence is lacking on this topic in diabetic patients, In this study, we aimed to evaluate the HPA activity and the urinary albumin levels, so as to determine whether there is an association of cortisol secretion with microalbuminuria.

2.1. Study population. Data were collected retrospectively from January 2016 to September 2019 at The Second Affiliated Hospital of Guangzhou Medical University. Selection criteria were hospitalized patients with diagnosed T2DM, impaired glucose tolerance, or impaired fasting glucose. Exclusion criteria were as follows; A. diagnosed adrenal diseases including Cushing syndrome, pheochromocytoma, and primary hyperaldosteronism; B. with history of surgery of the central nervous system; C. with history of pituitary disease; D. severe infection; E. severe stress including acute myocardial infarction and diabetic ketoacidosis; F. application of glucocorticoids in the last 3 months; G. severe impaired liver function; H. history of malignant tumors; I. severe hypoglycemia during the last 3 months; J. severe dysregulation of serum electrolytes. If the serum cortisol level at 8:00 h exceeded the upper limit of normal range, an overnight dexamethasone (1 mg) test was done to exclude subclinical Cushing's syndrome. Sufficient suppression of serum cortisol was defined as < 50 nmol/L. Eventually, a total of 211 patients were involved for assessment. This study was approved by the Ethics Committee of the Second Affiliated Hospital of Guangzhou University. The committee waived the need for informed consent due to the retrospective nature of the study with no impact on health outcome.

3.1. Clinical characteristics of the study subjects. Baseline and clinical characteristics of the enrolled subjects are presented in Table 1. Most patients (n=198) were diagnosed with T2DM. Thirteen patients were diagnosed with prediabetes (IGT n=12, IFG n=1). The median age of the subjects was 56.0 years old, ranging from 17 to 90 years, and 53.1% of patients were female. Median duration of diabetes was 3.0 years (range 0-30 years). The median BMI of the patients was 27.0 kg/m2 (range 17.5-47.1 kg/m2). About 70% of the study population had a past history of hypertension. Microalbuminuria was found in 91 patients (43.1%). Subjects were allocated to normoalbuminuria (NAU) group (n = 120) or microalbuminuria (MAU) group (n = 91). The prevalence of hypertension and diabetic retinopathy was significantly higher in patients with microalbuminuria. Levels of serum cortisol (both at 8:00 h and at 16:00 h), BP (both systolic and diastolic) and high sensitivity C-reactive protein (hsCRP) were significantly higher, while eGFR levels were significantly lower in the MAU group than in the NAU group. 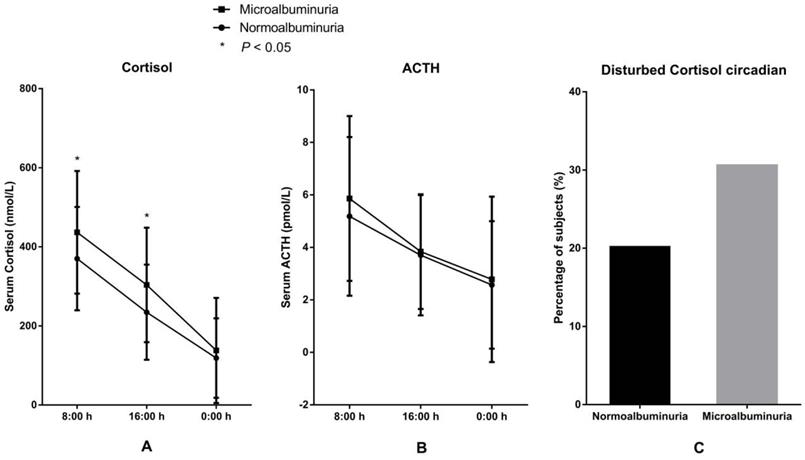 Receiver operator characteristic (ROC) curve of serum cortisol at 8:00 h and at 16:00 h for detecting microalbuminuria. 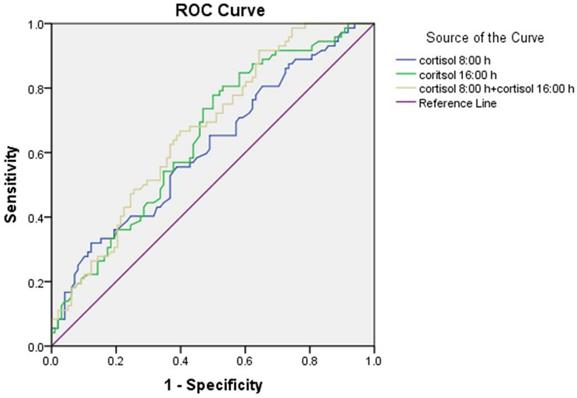 Microalbuminuria is an early manifestation of diabetic nephropathy and may be indicative of diffuse endothelial disease. Prediabetes and T2DM are associated with generalized microvascular dysfunction, including microalbuminuria and reduced kidney function [12, 13]. The present study demonstrated a relationship of increased serum cortisol and the presence of microalbuminuria in subjects with T2DM or prediabetes. Previously, a study showed that patients with MetS and disturbed cortisol balance display more microalbuminuria [10]. In patients with T2DM, increased hypothalamic-pituitary-adrenal axis (HPA) activity was found to be related to the presence of some diabetic chronic complications, and the level of cortisol secretion was linked with the number of diabetic complications. But an association between the presence of diabetic nephropathy and cortisol levels was not found [14], which was different from our results.

Cortisol concentrations, evaluated in serum, hair or salivatory forms, were considered to be related to many metabolic features in patients with metabolism-related disorders, such as diabetes, obesity, and MetS [15-19]. Higher glycemic levels, increased insulin resistance, and decreased β-cell function were most commonly reported to be correlated with higher cortisol levels [15, 18, 20]. A previous study even showed higher odds of T2DM in patients with higher cortisol [15]. Higher level of cortisol after 1mg-overnight-dexamethasone was associated with increased risk of T2DM, hypertension and fragility fractures [21]. Nevertheless, the relationship of cortisol with cardiometabolic factors or results varied across studies. More recently, a prospective study in children in mid-childhood indicated that hair cortisol concentration was not associated with cardiometabolic biomarkers except for a slight increase in insulin resistance [22]. A study including a large group of healthy adults showed that neither basal nor evening salivatory cortisol was associated with incident insulin resistance or T2DM [7]. The differences in outcome could partly be explained by the varied BMI values across the studies (BMI, 31.7 ± 7.2 kg/m2 [13]; BMI, 20.2 ± 3.7 [22]; BMI, 25.4 ± 4.1 kg/m2 [7]). Weight seemed to have an important impact on cortisol levels. Serum cortisol was reported to be responsive to weight change. Effective weight loss by lifestyle intervention and bariatric surgery were both associated with decreased cortisol levels in obese individuals [20, 24]. Among subjects with similar BMI values, no significant difference was found in cortisol levels between patients with MetS and those without MetS [9]. Also, varied cortisol secretion patterns might present in patients in different age or development phase. A study in children and adolescents showed that overweight and obese was not associated with elevated hair cortisol concentration [25]. In the present study, serum cortisol levels (8:00 h and 16:00 h) were associated with some of the glycemic variables (FPG, HbA1c). Except for glycemic parameters, no significant relationship between cortisol levels with BMI or other metabolic variables was indicated. The median BMI value of patients in this research was 27.0, which was higher than the healthy population but was lower than most studies investigating the level and impact of cortisol. This may partly explain the negative correlation findings.

Previously, only a few studies investigated the relationship of cortisol and renal function. A study in patients with essential hypertension demonstrated that serum cortisol level was negatively correlated with eGFR levels. But the researchers did not assess proteinuria [9]. In the present study, we found a significant positive correlation between serum cortisol and microalbuminuria, but not eGFR. This is in accordance with the varied pathogenesis and early manifestation of kidney lesion in diabetes and hypertension. Due to the cross-sectional nature of the study, definite cause-and-effect relationship between serum cortisol and microalbuminuria could not be established. But concerned with the well-recognized deleterious effects of glucocorticoids on glucose metabolism, it is reasonable to speculate that increased cortisol secretion may contribute to the progression of diabetes and the development of microalbuminuria. In the present study, no significant difference was found in most metabolic parameters, including those reflecting glycemic levels, β-cell function or insulin resistance or demographic characteristics such as age of patient or duration of diabetes between patients with microalbuminuria and those without microalbuminuria. This indicates that there might be other working mechanisms involved except for worsened glycemic control for the development of microalbuminuria. On the other hand, cortisol, as a stress-induced hormone, may be increased in diabetic subjects with chronic complications who were suggested to be exposed to chronic stress [26]. In this regard, further explorations are needed to determine whether there is a causality or interaction relationship between cortisol and microalbuminuria. Although only an association could be established so far, the study showed that a higher level of cortisol, even in the normal range, may be related with the development of microalbuminuria. Moreover, a combination test of cortisol levels in two different time points, one in the morning and one in the afternoon, increase the discriminatory power. Most studies focused on morning or midnight cortisol secretion, and cortisol levels in the afternoon were rarely concerned. Our results suggest that cortisol level in the afternoon is also worthy of attention and may indicate some important metabolic changes. Furthermore, dynamic testing of daytime cortisol levels has stronger discriminatory power than testing at a single time-point. No significant association was found between cortisol secretion and the presence of other diabetic complications including retinopathy, peripheral neuropathy, or foot ulcer in our study. This might be explained by the low prevalence of these complications and the limited sample size.

There are several limitations of the present study. First, as mentioned above, only a limited number of subjects in a single center was involved. Also, the samples were derived from an inpatient setting, which might lead to a condition of enhanced HPA activity and thus cause evaluation bias [27]. Second, all the outcomes were achieved by retrospective analysis, which does not allow us to draw conclusions about causality. Third, only a small group of patients with prediabetes was included. In this regard, though no significant difference was found in the prevalence of microalbuminuria between patients with T2DM and patients with prediabetes, the results of this study mostly came from the analysis of T2DM patients. Therefore, the results need to be cautiously interpreted.